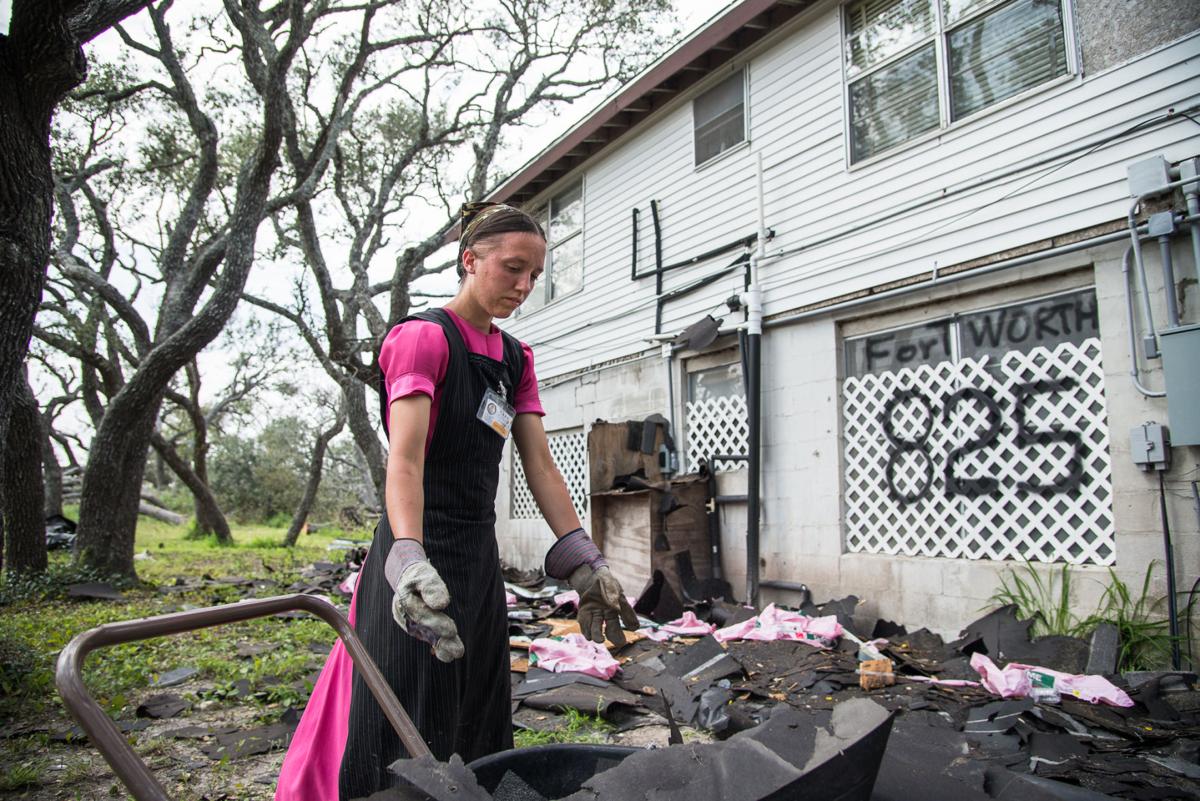 Barbie Ann King, a volunteer from Pennsylvania, tosses damaged roof shingles into a wheelbarrow at a home on Corpus Christi Street in Rockport. King was part of a group of volunteers from an out-of-state nonprofit called Community Aid Relief Effort. 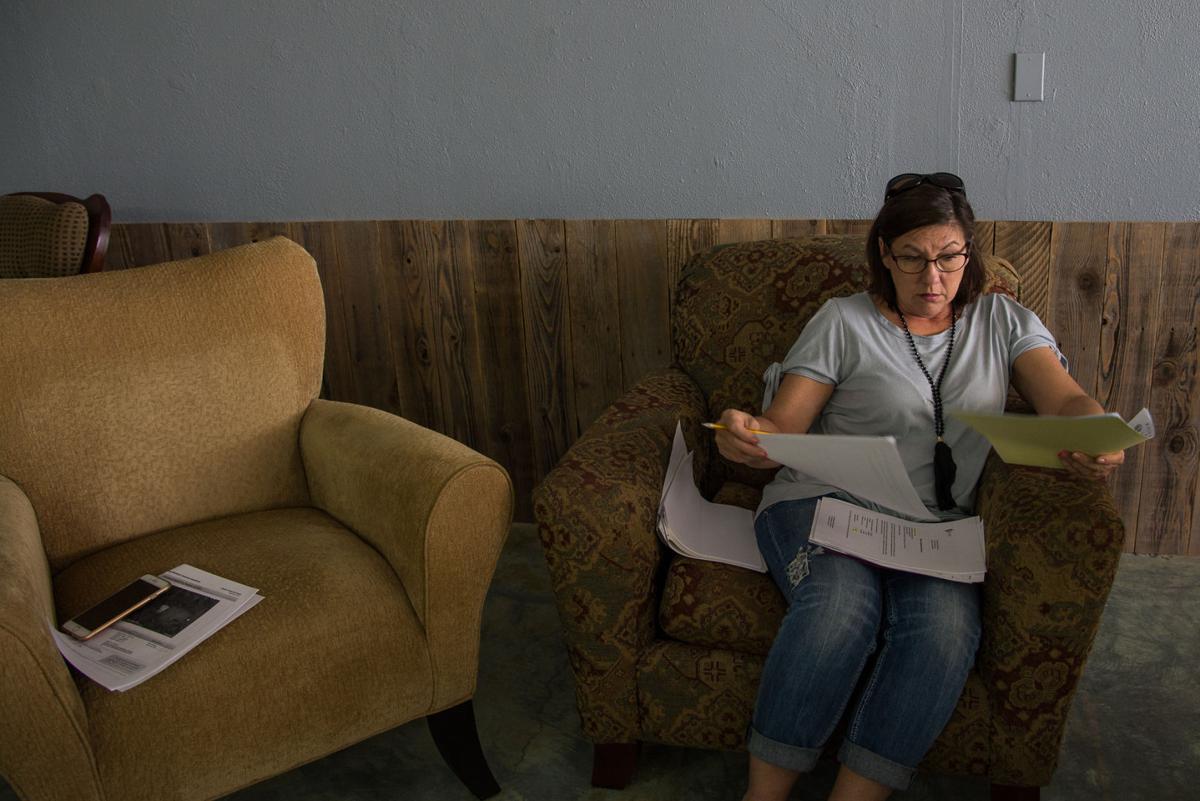 Nancy Bolting sorts through paperwork documenting her insurance claim with the Texas Windstorm Insurance Association at her business in Rockport. 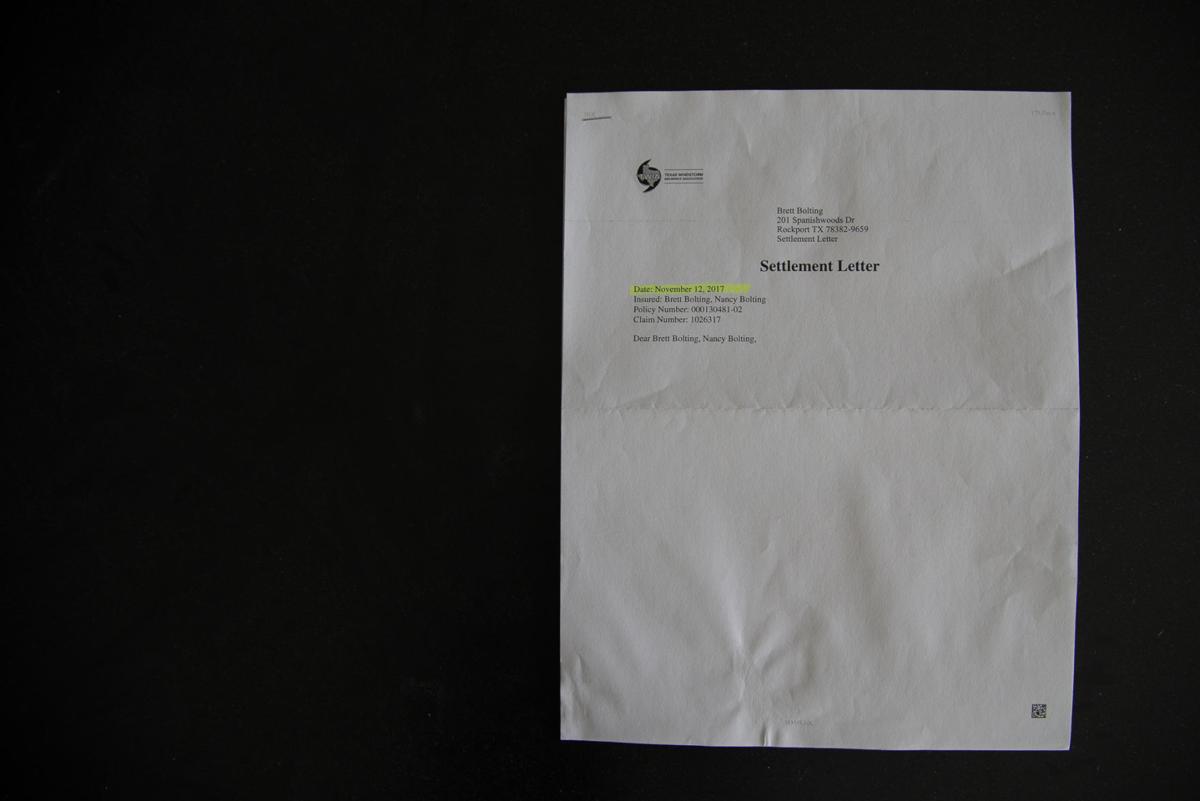 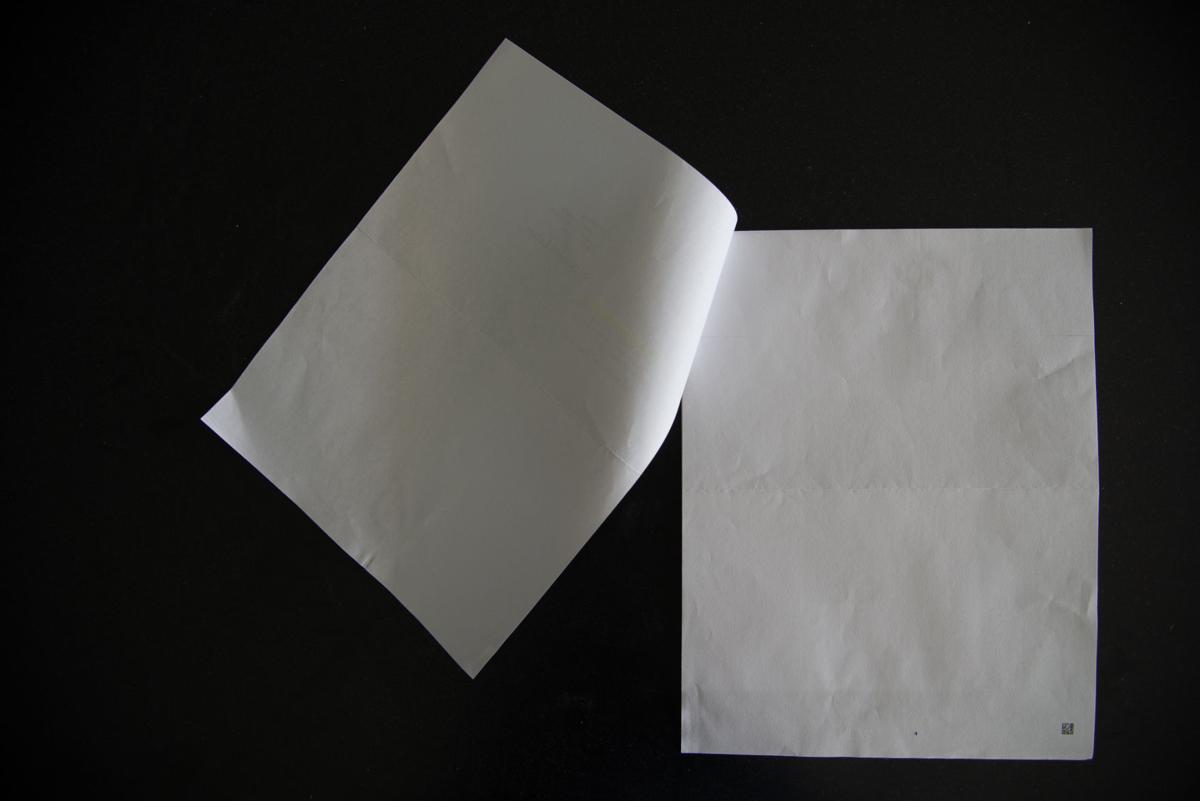 The second page of a settlement letter from Texas Windstorm Insurance Association settlement addressed to Nancy Bolting, of Rockport, is blank. Hurricane Harvey damaged the roof of Bolting's Rockport home.

Barbie Ann King, a volunteer from Pennsylvania, tosses damaged roof shingles into a wheelbarrow at a home on Corpus Christi Street in Rockport. King was part of a group of volunteers from an out-of-state nonprofit called Community Aid Relief Effort.

Nancy Bolting sorts through paperwork documenting her insurance claim with the Texas Windstorm Insurance Association at her business in Rockport.

The second page of a settlement letter from Texas Windstorm Insurance Association settlement addressed to Nancy Bolting, of Rockport, is blank. Hurricane Harvey damaged the roof of Bolting's Rockport home.

Nancy Bolting felt so frustrated she had to walk away.

It was almost a week after Hurricane Harvey, and Bolting and her husband were meeting with their insurance adjuster to review damage to their Rockport home, she said. As they talked in the backyard, Bolting argued that her home had more damage than the adjuster said was covered.

But little did she know, the battle with her insurance company, the Texas Windstorm Insurance Association, was only beginning. It wasn’t until mid-March that Bolting said she finally received all of her compensation – about $22,000 to replace her roof, which is far greater than the $2,000 she initially was offered, she said.

“It’s a sad thing that you pay into it – and you’re forced to, you have to have it – but then they want to fight giving you back the money,” Bolting said.

The Texas Windstorm Insurance Association, known as TWIA, is the insurer of last resort for property owners along the Texas Gulf Coast who may otherwise not be able to find insurance. But in the aftermath of Hurricane Harvey, some homeowners who paid into the association for years said it failed to cover their costs or forced them into complicated legal battles to fight claims. From not returning phone calls to underestimating damage, some homeowners say Hurricane Harvey exposed problems with TWIA, an association plagued with accusations of mishandling claims and funding problems in the past.

Although TWIA says it strives to handle all claims fairly and currently is financially stable, some coastal Texas mayors say the association should be dismantled entirely. Other experts and lawmakers are calling on policymakers to scrutinize the association’s performance and examine whether it has enough steady funding to handle events like Harvey in the future.

“TWIA is just a monster that has been created by the government because no one else would help us out,” said Fulton Mayor Jimmy Kendrick, who has called on lawmakers to get rid of the insurer.

TWIA has been the “insurer of last resort” for Texas Gulf Coast homeowners since 1971, when the Texas Legislature created it to provide insurance coverage for property owners who lived in coastal regions where private companies refused to write policies. The quasi-government agency offers only wind and hail insurance in certain high-risk counties and doesn’t aim to compete with private companies.

As of last summer, TWIA managed almost 235,000 policies along the Texas Gulf Coast, according to TWIA. In August, Hurricane Harvey delivered a devastating blow to the communities it covered, marking the first hurricane to slam Texas since 2008, when Ike pummeled the coast near Houston.

Based on claim data through Dec. 31, 2017, TWIA said it estimated recording losses of about $1.45 billion. By the beginning of March, TWIA received more than 75,000 Harvey claims and spent just more than $1 billion on claim payments.

Only a small fraction of those claims – 1,442, or about 2 percent – were disputed, which means property owners may have requested an appraisal or planned to sue the association. Of those disputed claims, TWIA received 251 notices from people who planned to sue and 16 lawsuits.

“TWIA remains committed to paying every cent we owe under the policy,” said Anna Stafford, who works in TWIA’s communications and legislative affairs department. Stafford said she couldn’t comment on specific cases but recommended that homeowners call TWIA if they need help with their claim.

But some frustrated homeowner say the low number of people who fought claims may not reflect the entire situation.

“If somebody doesn’t know what to do or where to go, they just give up,” Bolting said.

Last week, Bolting, who runs a boutique in Rockport, sorted through a folder of her correspondences with TWIA, the Texas Department of Insurance and complaints to officials like Gov. Greg Abbott.

Among the documents was an estimate from an engineer hired by TWIA who used data from a private company, which said sustained wind speeds near Bolting’s home were lower than what the National Weather Service estimated. TWIA says it hires experts to determine the most accurate weather conditions, but Bolting said the association in part used the data to argue wind speeds weren’t strong enough to cause the damage to her roof.

It took almost six months of leaving voicemails for TWIA staff, getting estimates, writing to elected officials and waiting in lines at the insurer’s mobile help centers before Bolting finally got what she wanted – enough money to replace her roof. The amount she received, about $22,000, was nearly $20,000 more than what TWIA initially offered, she said.

“I spent a lot of time,” Bolting said. “If I was working out of town or I didn’t have the time to devote like I did to all this, I don’t know what I would’ve done.”

This is far from the first time the association has been accused of mishandling claims. Following Hurricane Ike, hundreds of policyholders sued TWIA for issues like botching claims or failing to reimburse property owners in a timely manner, forcing the association to pay out millions of dollars in settlement money.

The funding problems following Ike spurred TWIA’s board in 2013 to discuss a proposal that would have basically declared the association bankrupt.

“You do worry more about underpayment of claims when you have an insurer under serious financial stress,” said Seth Chandler, an insurance law professor at the University of Houston.

Although underpayments and rates could pose problems after Harvey, whether or not the association will be financially stable in the future should be policymakers’ biggest concern, Chandler said. For example, he continued, could the insurer afford claim payments if multiple hurricanes hit in the near future?

TWIA says it’s financially stable and had $4.9 billion ready to fund losses during the 2017 hurricane season, but Chandler contends the business model isn’t sustainable long-term. The association hasn’t been able to build up cash reserves necessary to handle catastrophes like Harvey and instead relies on funding sources with high interest rates, he said.

“If TWIA was a conventional insurer, they would’ve been put out of business by (the Texas Department of Insurance) years ago,” Chandler said.

In response to the TWIA problems, lawmakers in regions battered by Harvey have promised to examine the association’s performance. Whether to tweak policies, alter the makeup of TWIA’s board or change appraisal processes are among issues that Texas Rep. Todd Hunter, R-Corpus Christi, said he wants to explore.

“One of my goals is to be proactive in finding where the good, the bad and the slowness is and to find out what other alternatives we should be looking at,” said Hunter, who worked as a lobbyist for TWIA before being elected to the Texas Legislature for the second time in 2008.

Hunter said he’s heard from numerous unhappy property owners who say TWIA is hindering recovery more than helping. During the next few months, he plans to reach out to business owners, residents and local officials to discuss what needs to change so lawmakers can draft new proposals in time for the 2019 legislative session.

“It’s time to make sure the coast is protected and treated fairly,” Hunter said.

In Ingleside, just 15 miles from where Harvey made landfall, the city’s mayor still hasn’t been able to fix his home, which sits directly atop his restaurant, Floyd’s Ranch House. Like many of his constituents, Luis Lamas is struggling to get TWIA to pay what he thinks it owes after water soaked his ceilings, walls and electrical wiring.

TWIA didn’t offer him enough to repair all the damages, so he ended up hiring an attorney, he said. Seven months after Harvey, portions of his home are still in total disrepair.

“You look at it, and it’s unfinished – I’m talking about no ceilings and boards and stuff – it starts to drain on you for after a while,” Lamas said.

Lamas’ concerns echo those of other local government leaders, who wonder if the state is better off forcing private insurance companies to offer coverage. Lamas said he doesn’t know the solution but knows who is being hurt the most – his constituents.

“We can’t be forgotten – I say that for the community,” Lamas said.

NEED HELP WITH YOUR CLAIM?

If you recently received a claim estimate or check from TWIA but think the amount is too low, call 800-788-8247 or email claims@twia.org. For more information on the claims process, go to twia.org/claimscenter.

How satisfied are you with how your insurance company handled your Harvey claims?