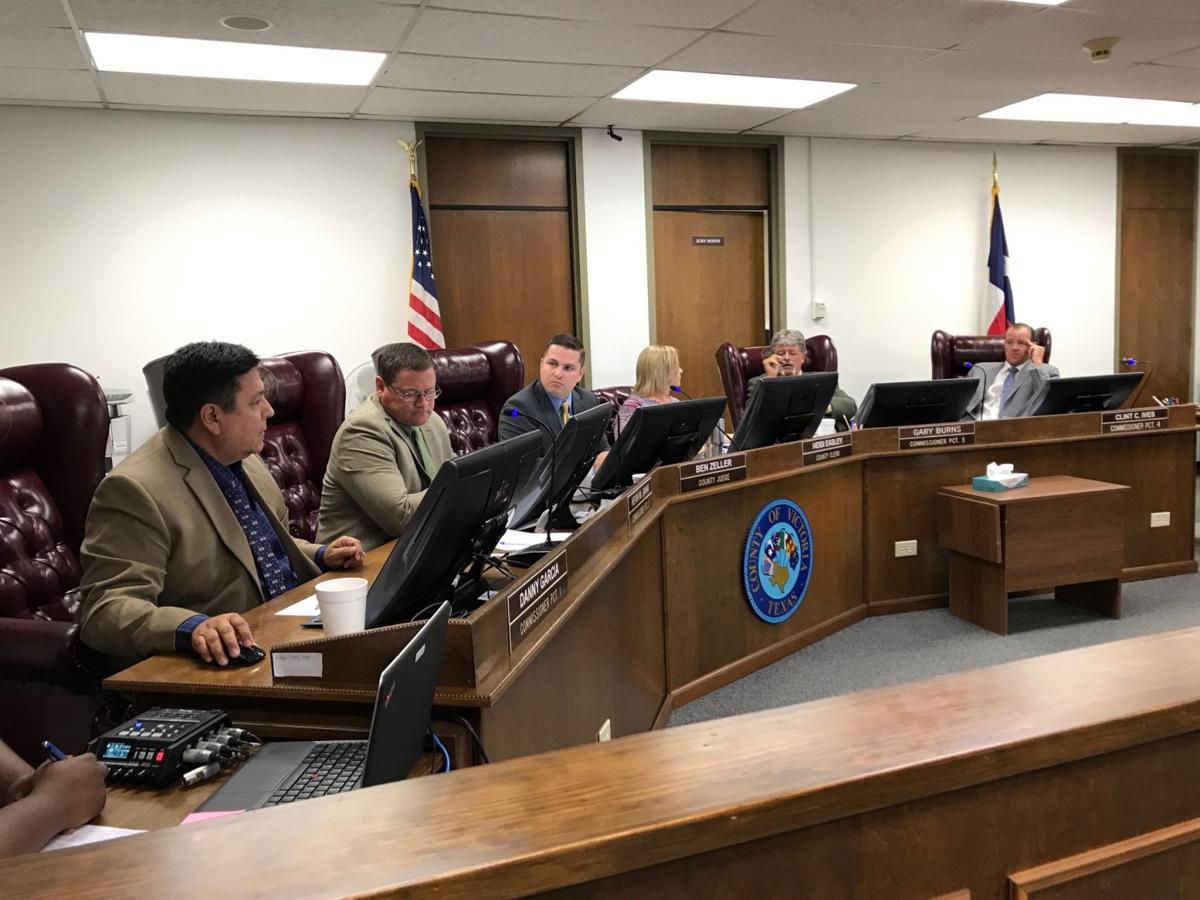 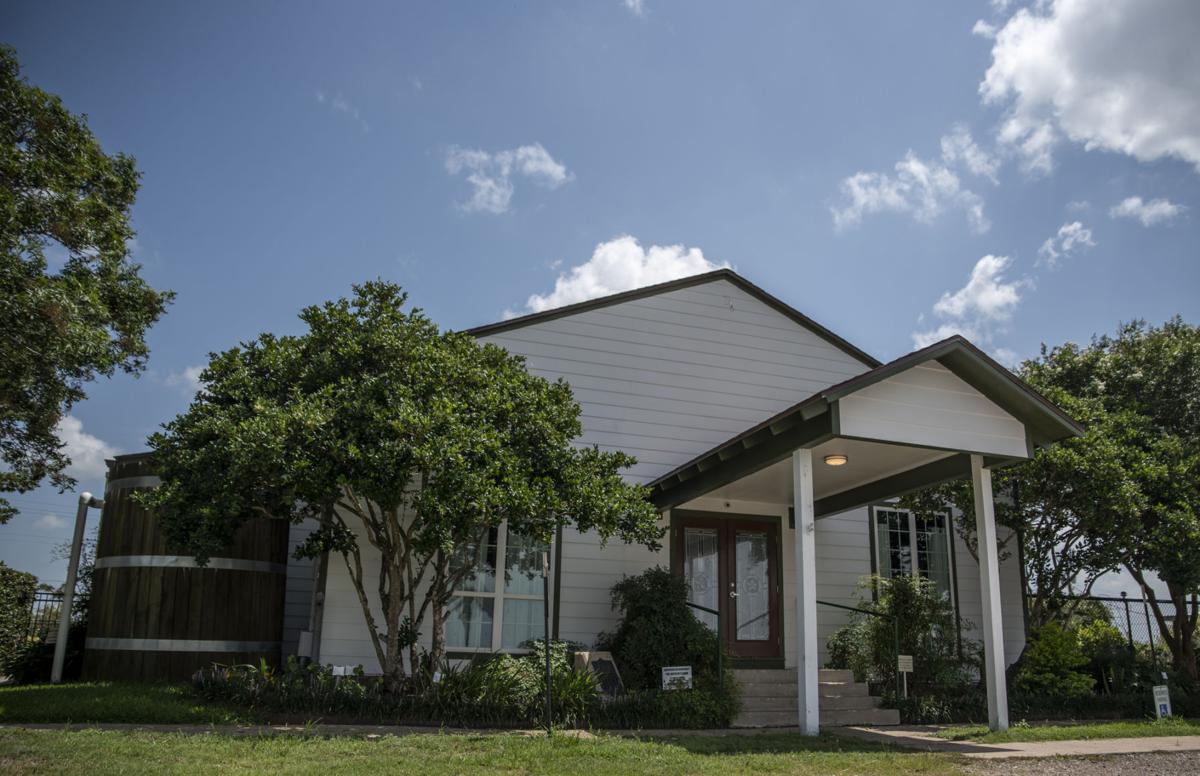 The county exempted itself from legal bidding laws after the hurricane struck to handle repairs immediately after the storm. The county did this mainly to contract with the Kansas-based Virtus Group, which did both remediation and repairs.

Rather than operate under the standard legal procedures, which state that all projects worth $50,000 or more must go out for bid, the county voted unanimously Sept. 11, 2017, to hire the restoration and reconstruction company, now called Commercial Restoration Company, to do the work.

“It seems like we had an open checkbook, and that’s all of our mistakes,” Victoria County Commissioner Gary Burns said this week. 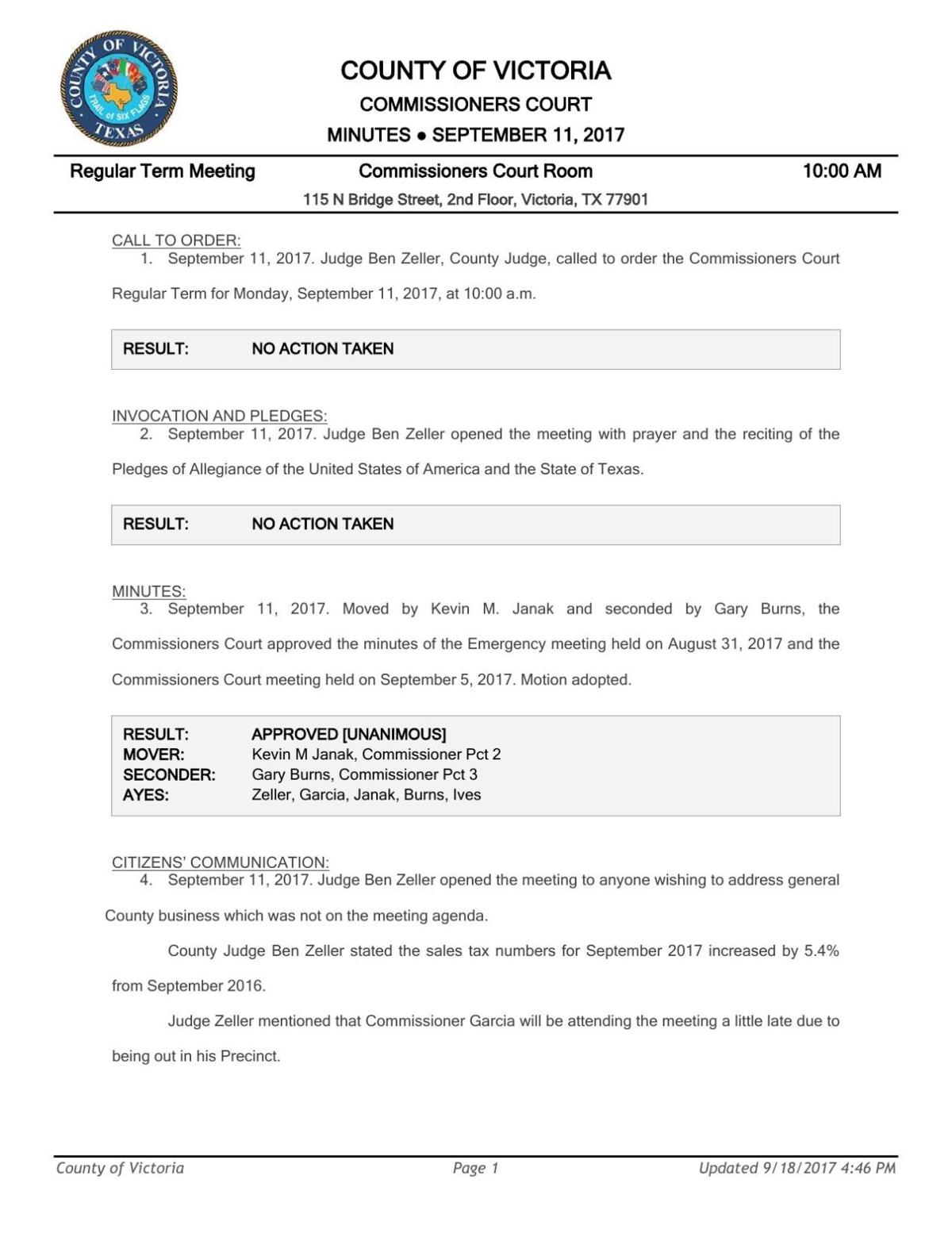 The county commissioners acted on a legal exemption that states that amid a public calamity, they can skip the bidding process and act immediately to relieve the necessity of the citizens or to preserve property.

How long counties can remain acting under an emergency exemption is unclear as the law doesn’t provide a strict time frame.

A representative from the county’s insurance carrier, the Texas Association of Counties, said in an email less than two weeks after the hurricane hit that “we are nearing the end of the emergency services phase,” but the county continued acting under the exemption and went on to authorize hundreds of thousands of dollars in payments to companies that also did work without the standard bid process.

More than a year after Harvey hit, in Sept. 10, 2018, commissioners approved four payments to Bassco Services that totaled $65,226 for work at the Victoria Regional Airport. During the meeting, the payments were approved among all the county’s payable accounts, which commissioners routinely approve with no discussion.

Benji Rumsey, an area manager with King Consultants, said the company was a subcontractor through Virtus, and he wasn’t aware of how the bidding process was arranged.

On Jan. 14 of this year, the county approved two major payments to AAR Incorporated for $178,046 and one for $156,973 for asbestos abatement on numerous buildings. Again, during that meeting, there was no discussion by commissioners.

On four occasions earlier this year, commissioners approved payments totaling more than $62,000 to Wendt Electrical Services for work at the Officers’ Club. One of the payments, approved Feb. 19, was for $19,694.01; another in March was for $29,213.28. On both occasions, commissioners didn’t discuss the payments.

According to the county’s records of awarded bids, none of these companies was awarded the work after participating in the competitive bid process. Representatives from Bassco Services, AAR Incorporated and Wendt Electrical did not return requests for comment.

Airport Commissioner Dennis Patillo, who is among the airport commissioners calling for answers from county officials about the management of Harvey recovery, said bidding is an important practice.

“The only thing I can say about that is whether it’s for public work or private work, getting multiple bids for construction projects is always valuable,” he said.

Burns said that although approval of all payments in one sum is routine, the county can list big projects as individual items for discussion, comment and action during the court’s weekly meeting. For example, he noted, in late July, the court scrutinized a $10,500 invoice from Clegg Industries for work done at the airport’s maintenance shop.

In his 15 years on the county commission, he said, he’s never seen the court begin to bypass discussing major payments as it did after Harvey, and “it raises concerns.”

“We don’t scrutinize everything closely. All of these payables go through the auditor first, and they bring them to our attention, so I don’t think we even saw these, but we should have,” he said.

Also, if the court had seen and discussed together the email from the Texas Association of Counties representative that noted that the emergency phase was over, he said, he thinks the court would have moved to resort back to standard bidding practices. The representative recommended the county continue working with Virtus but added in the email, “I understand bid laws and the local political environment should be considered.”

A government expert previously told the Advocate that when Texas counties choose to bypass legal bidding laws and act by way of an emergency exemption, it can lead to enormous financial and political problems.

“State bidding procedures are designed to protect a county and its residents from paying too much and getting too little in quality and from undermining the trust of the process in regard to how money is being spent,” said Professor Donald Kettl, a government expert and professor at the University of Texas at Austin Lyndon B. Johnson School of Public Affairs.

Kettl said there are risks and “potentially huge” stakes that come with stepping outside of normal bidding processes in emergencies and it is important for county officials to step back and examine the situation to ask when the right time is to resume the standard bidding process.

Annually, the county exempts itself from bidding on other items, too. For example, on Jan. 2, 2019, county commissioners granted a discretionary bid exemption for county purchases through a state-licensed auctioneer.

At the same meeting, county commissioners granted a discretionary bid exemption for Victoria County vehicle and equipment repairs. There was no discussion by commissioners on either action during the meeting.

Burns said it’s time for the county to move toward transparency to “gain back the public’s trust.” He said this will come, he hopes, after a finished report from County Commissioner Kevin Janak, as well as results from an outside forensic group that examines the entire matter.

Victoria County commissioners spent millions on repairing buildings after Hurricane Harvey, but they are just learning they still have roofs t…

The fishy smell is not getting any better. They need a spotlight shown on what appears to be "I'll scratch your back, you scratch mine."

Astros win game 4 of the World Series but the top story in the Advocate is to continue to drag up the bid exemption concerns post Hurricane Harvey.

The entire commissioners court is responsible for the decisions post Harvey (good or bad choices). That’s what we elected them to do and they unanimously approved the numerous things mentioned in the Advocates report.

At any given point the issues could gave been discussed in court, tabled to a committee or other actions. Any of them could have raised their hand and said hold on, let’s get some legal counsel, or advice from higher headquarters.

The best way to move forward is to get an outside auditor to come in and look at everything that transpired and present a report. I’d also like to see in that report lessons learned and future “best practices” guidelines for emergency recovery.

Hindsight is always 20/20 but it’s time to get done with this chapter and close to book to move on and look toward the future while staying prepared for future contingency operations.

In the military we know the value of before, during, and after mission analysis that’s what makes us better and that is an experience and strength that I will bring to the table as a County Commissioner.

Seriously? Move on because the World Series is more important than how our local officials handle our tax dollars? You lost my vote (if I am eligible to vote for or against you) at the first sentence. And, we don’t “table” to a committee. We refer. Look up “table” in Robert’s Rules of Order. Thanks.

Please don’t misinterpret my main point. Yes this is of a vital concern. This has been dragging on through the Advocate for months and we need to have an external audit done to identify all the concerns that keep being brought up. I haven’t heard anyone bring up a solution just a continuation of a saga in the Advocate that runs over and over again. We all want answers and transparency. Nothing new happen on Saturday or over the past week to warrant this as a top story, that’s just my opinion. These aren’t new developments.

Two weeks ago when I was at commissioners court several items were “referred” to committee so I stand correct on the terminology. I used the wrong term and take ownership of that. I can gracefully take correction. Best regards to you and yours.

The new information presented in this story is the number of additional businesses that also received contracts with the county without any bidding or public discussion. The county commissioners have not yet announced they are resuming normal bidding practices, as required by state law, or referred this issue to an independent auditor or any outside body. For more on the coverage, please go to VictoriaAdvocate.com/airportissues. Thank you for reading and commenting.

Thank you Victoria Advocate Editorial Board for clarifying those points. Again, I can graciously accept correction.

At the end of the day many of us citizens are ready for these issues to be finalized and addressed. I emphasized at today’s commissioners court that an external audit is the best course of action for the way ahead to get everything identified (good or bad) and take the lessons learned and put it in the play book for the next unfortunate event which is an inevitable reality of living on the Gulf Coast. I lauded the commissioners for the work that did during that time and I hope we can get a report put together in the near future and move ahead better prepared for the next one.

This appears more and more like a check up to a cover up.