Victoria County officials are giving an ultimatum to a company that did millions of dollars worth of work in the county after Hurricane Harvey.

Victoria County commissioners at their meeting Monday approved sending a letter to the Virtus Group, the company that remains at the center of a controversy about whether the county spent Harvey recovery money in taxpayers’ best interests.

The letter asks that the company, now called Commercial Restoration Company, provide required documentation within 10 business days related to its work in the county and a $352,000 invoice that the county has not paid. If it does not provide the documentation, the letter states, “Victoria County will be forced to conclude that the CRC is abandoning any claim for specific balances for the invoiced buildings.” 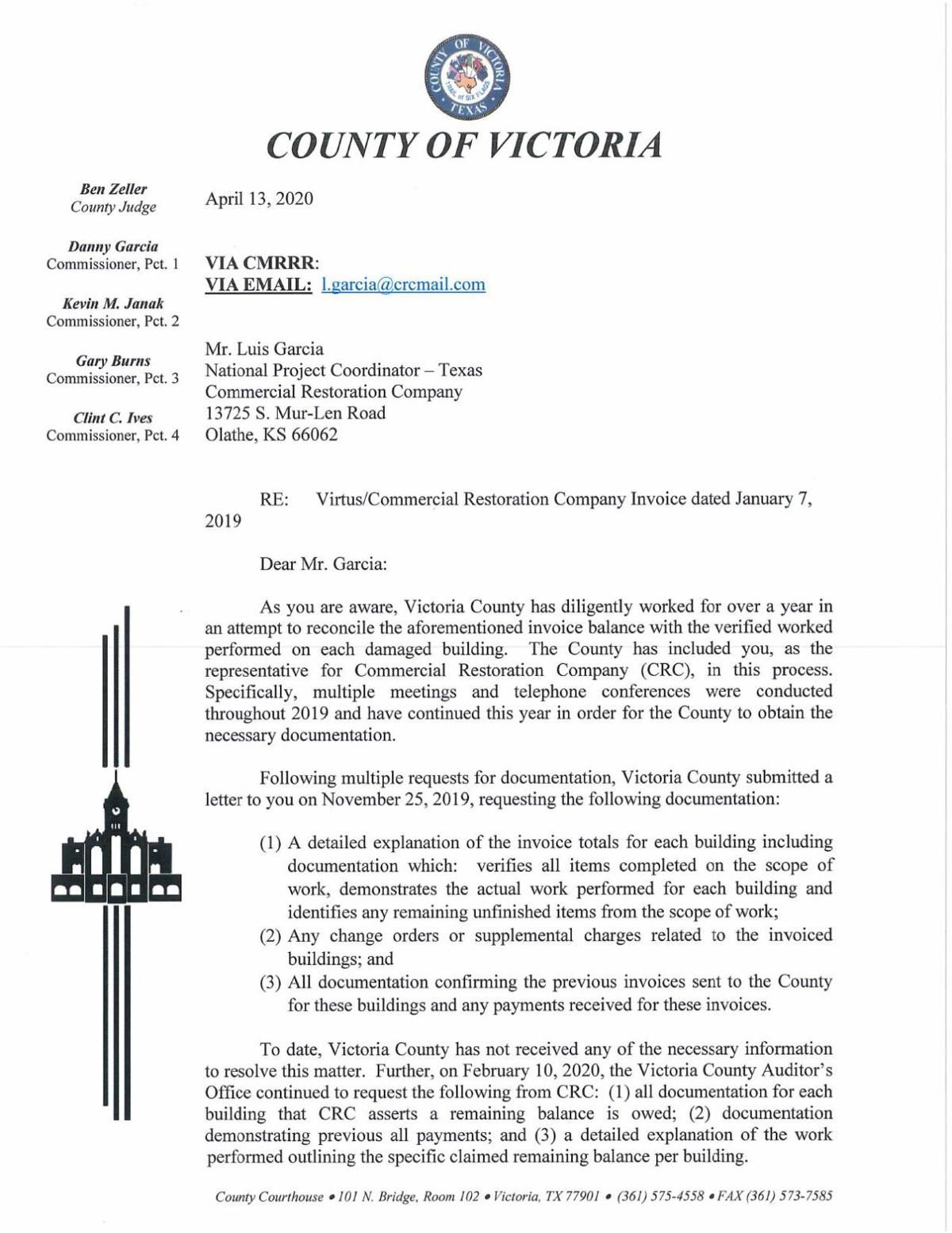 “This has gone on long enough,” said Commissioner Kevin Janak on Monday, who for more than a year has worked to settle the matter with Virtus amid ongoing questions about the county’s actions taken after the storm.

The court discussed giving Virtus a shorter deadline because this isn’t the first time the county has asked for necessary documentation related to the invoice. In November, the county also gave Virtus a 10-day deadline for submitting adequate documentation. The company submitted information, but not everything the county needed, Janak said Monday.

While commissioners said they’d prefer to give the company fewer days to respond, they decided to keep the deadline at 10 business days because it was the first letter that mentions an ultimatum.

“I’d give them two hours, personally,” said Commissioner Clint Ives, who later agreed to the 10 days.

Janak said he hopes the letter will bring about a conclusion “to get this wrapped up one way or the other.”

“Hopefully they’ll provide something,” Janak said. “It’ll have to be exactly what we need.”

The Advocate filed an open records request Monday because a copy of the letter was not available.

Also on Monday, the commissioners took the next step in the forensic audit of the county’s spending and management of Harvey recovery money.

Each of the commissioners turned in their rankings of the 16 firms that submitted proposals to conduct the forensic audit, which are included in the court’s meeting packet. Commissioner Gary Burns, who volunteered to spearhead the matter, noted that the rankings were submitted in different formats.

However, BKD, a national certified public accounting and advisory firm that “goes well beyond the standard accounting services to include risk management, technology, wealth management and forensic and valuation services,” according to its website, appeared to be in each of the commissioners’ top choices.

Burns said he plans to work with John Johnston, the county’s project manager and engineer, to review the rankings and the request for qualifications, interview the top firm or firms and bring back a final recommendation to the court.

Also on Monday, the commissioners heard an update from Victoria County Judge Ben Zeller about county operations in regards to COVID-19. Zeller provided the court with the most recent numbers related to the virus in the county, which are released by the Victoria County Public Health Department daily. Zeller said he's receiving questions about what will happen May 1 when the current stay-at-home order ends, and explained that Victoria County, like other local jurisdictions, is waiting for Gov. Greg Abbott to announce the next direction to take.

Victoria County commissioners on Monday will discuss a proposal for what appears to be a forensic audit of Hurricane Harvey spending.

"John Johnston, the county’s project manager and engineer,..." -- This is the first time I've seen Mr. Johnson mentioned. If the county has a project manager and engineer, then why was managing a project the magnitude of this one left entirely in the obviously incompetent hands, and maybe more, of Joyce Dean?! Did she tell him to stay out of it as she did the airport manager? The forensic audit, if it ever happens, has so much weird and questionable stuff to look at regarding the Commissioners Court and Ms. Dean that Virtus is almost a side-issue.

I may be reading this wrong but why would Virtus care weather the County spent Harvey moneys in the best interest of the taxpayers? Has the County ever stated to Virtus what information was needed for their invoices? Perhaps I could invite Virtus to Victoria and forget to tell anyone that they are here...

Leonard -- "Perhaps I could invite Virtus to Victoria and forget to tell anyone that they are here" -- That's already happened at least once, and is a part of why this fiasco stinks far more than just being a matter of unbelievable incompetence.