A Suddenlink representative said Tuesday the cable and internet service provider is working to resolve service issues in Victoria and address the community’s concerns.

“I’m coming here to let you know I do hear you loud and clear,” Travis Nance, the regional vice president of market engagement with Suddenlink, said to Victoria City Council members.

Nance said he and a Suddenlink director of operations recently met with City Manager Jesús Garza, Victoria Mayor Rawley McCoy and City Attorney Thomas Gwosdz to talk about concerns from officials and residents. 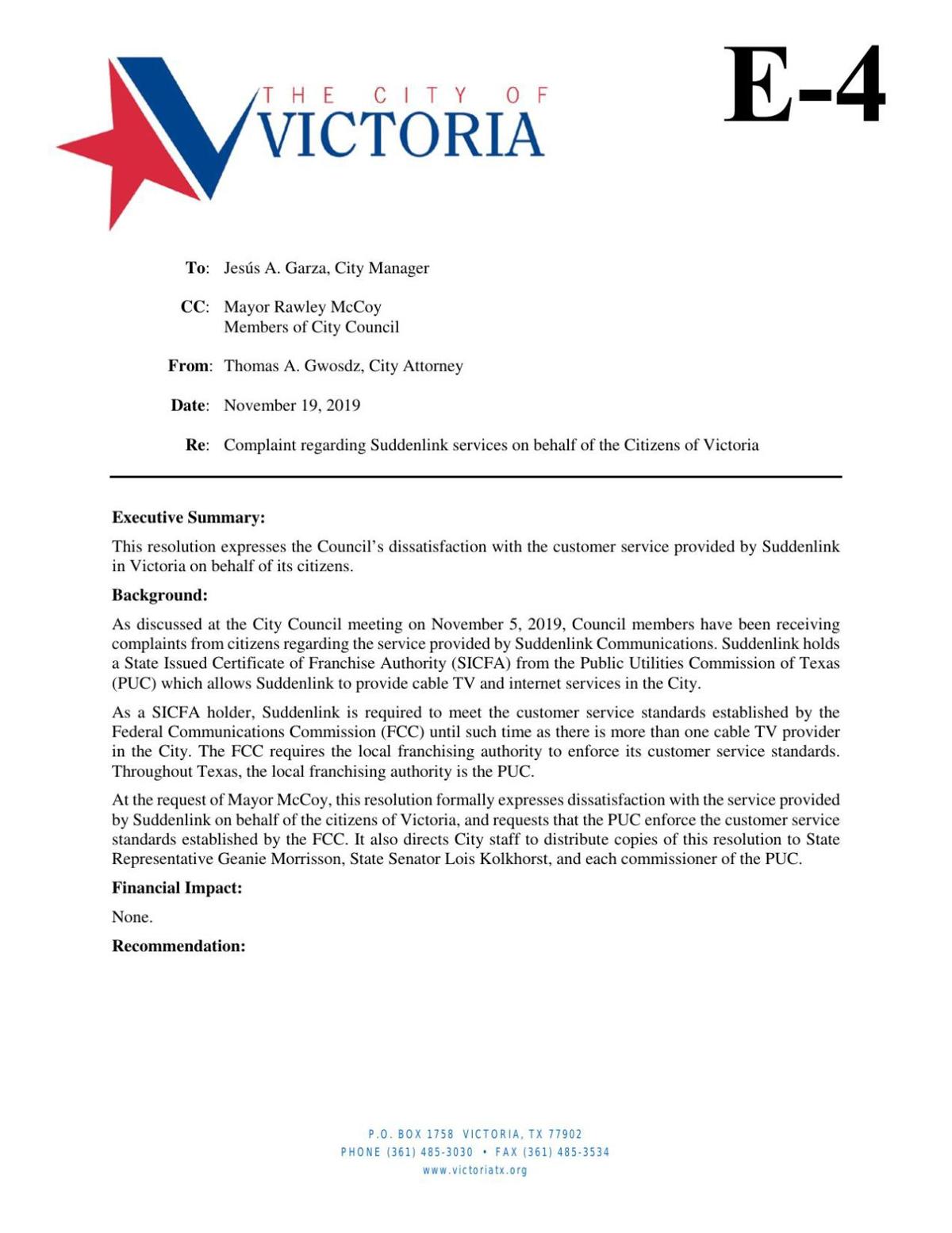 The City Council approved a resolution Tuesday that expresses the city’s dissatisfaction with Suddenlink. The resolution comes after ongoing complaints from the public about the company and a decision from the council to take a “firm stance” in addressing the issues.

Nance said Garza and McCoy have asked the company to address the complaints and have been “strong advocates” for having a good partnership in the city.

He explained that Suddenlink recently went through a major initiative that upgraded its billing and operating systems. As a result, he said, the company has seen interruptions and other significant customer service issues. But as the company moves through the changes, he said, “there has been a lot of positive movement.”

Councilman Jeff Bauknight, who originally brought up the issue to the council, thanked Nance for attending the meeting. But, he said, he wanted to relay the fact that residents’ complaints aren’t about customer service issues alone.

“If a fair product was being delivered as promised, there wouldn’t be the need for all the customer service calls,” Bauknight said.

“I think it’s going to accomplish that the city of Victoria listens to its citizens and are concerned about their concerns,” McCoy said.

Nance said he plans to continue working with city staff to communicate company changes and improvements that will help address residents’ complaints and concerns. McCoy said he is receptive to working with Suddenlink as the company works to resolve its issues.

“I will be the first person to come back at a later date if their efforts prove valid and ask you to allow us to send a letter expressing what they are doing to take care of our citizens,” McCoy said. “It’s just a matter of voicing the dissatisfaction of our citizens and being a voice for them.”

Victoria City Council on Tuesday will discuss Suddenlink’s service in the city, a conversation that comes after council members said they’ve r…