Although a Victoria County commissioner made public Monday a report outlining spending after Hurricane Harvey, it lacks documentation from the company that did millions in recovery work, and some say questions remain.

Victoria County Commissioner Kevin Janak released the report, which is more than nine months in the making, during the court’s meeting Monday. But the report was largely not discussed. County Judge Ben Zeller said that because the agenda item was listed to simply receive the report, discussion would come during the court’s Dec. 16 meeting.

“What was presented today I am satisfied with; I think (the work group) did an excellent job,” Ruschhaupt said. “Although, because the report is limited from March when the group took over until the present, I think that only gives part of the picture.

“I still question why it took so long, but more than that, I think an underlying question with the community is, ‘How did we get there?’ And I don’t know if that will ever be answered.”

In the report’s executive summary, the work group – made up of Janak and Sarah Hamman, a compliance specialist with the county’s administrative services office; Becky Smiley, Victoria County’s audit manager; and Rick McBrayer, Victoria’s emergency management coordinator – outlined an overview of the county’s spending on repairs after Harvey.

However, the report isn’t as complete as it could be, the work group said, because the county is still awaiting documentation from Virtus related to an invoice for about $852,000. The more than 400-page report is now available on the county’s website. 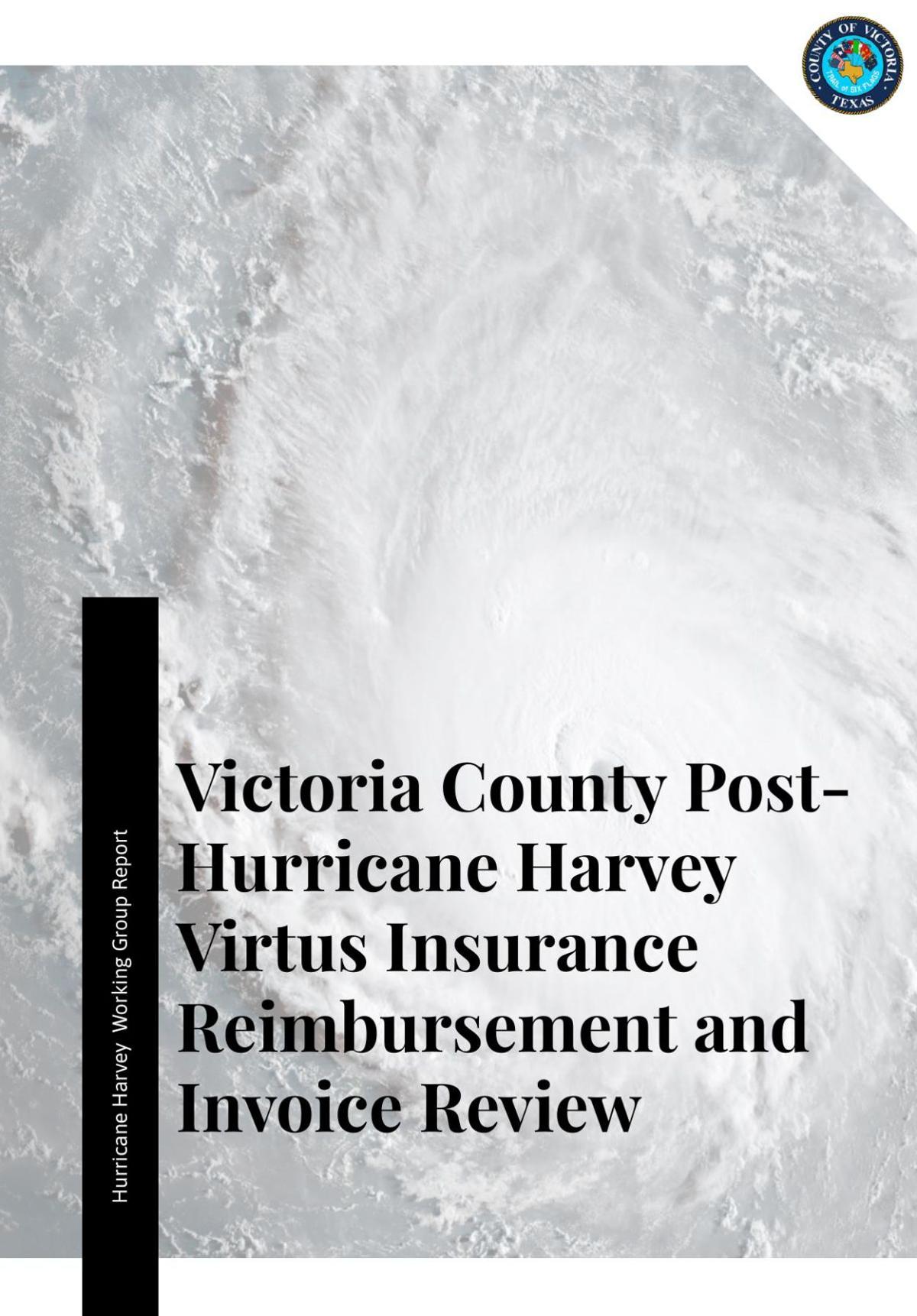 The Texas Association of Counties, which carries the county’s insurance, also paid Virtus about $1.6 million directly, the county has reported.

“And I just have one question,” Ruschhaupt said. “When this happens again, would you do anything different?”

“No. sir, I would not,” Janak said, explaining that because of the circumstances the work group dealt with, including allowing grieving time for the Virtus representative whose wife died, he would not change the process.

But there will be changes, Janak added, referring to recommendations made by the work group that are listed in the report. The recommendations are made on “how to enable Victoria County to more adequately recover from another catastrophic incident and navigate the insurance process in the future,” the report states.

“So there’s lots of changes there,” Janak said. “But for this, for all the obstacles that we had to go through, and everything that we’ve done, I would say I wouldn’t change a thing.”

The recommendations include forming a property insurance review committee to review the current property insurance coverage, recommend any changes and to review other options; working toward greater transparency of information and communication to the commissioners court from county departments and elected officials; and establishing a project management county working group, assigned to all major insurance claims.

Further, the group’s final recommendation is to engage Victoria County’s outside auditing firm to analyze and audit the financial documents related to Virtus and its insurance-related work as part of the annual audit for Victoria County.

“Sometimes, people see something differently than someone on the outside because they are so close to it,” he said. “An outside review is a major step toward transparency. How can you do things better later on if you don’t take an objective look at the way you did things now?”

Also during the airport commission meeting, Ruschhaupt asked Janak about work that people have been concerned was paid for but was not done.

Among those with concerns is Victoria County Sheriff T. Michael O’Connor, who wrote a letter to Janak in November to ensure sheriff’s office matters are in compliance, saying at the time that the sheriff’s office was told after Harvey that “some things were paid for and some services were rendered, but in fact, they were not.”

Hamman, the county’s compliance specialist, said there remain some questions.

“So without the documentation that we have requested from Virtus, what we can tell you is that what we verified, yes, that is completely 100% true, and it’s reflected in these numbers,” Hamman said. “But there are still a few outstanding items that we needed their documentation on, and we have not received that yet.”

The working group formed in March to review a final invoice dated Jan. 7 from Virtus totaling $852,078.05 associated to the insurance claims, Janak said. The county paid the company $500,000 but has withheld the additional $352,078.05 until Virtus provides sufficient supporting documentation with it.

In late November, county commissioners approved sending a letter to Virtus asking for additional documentation within 10 days. Janak asaid Monday the county had not received any response from the company.

Patillo asked about the working group’s comfort level in the documentation and work completed in the period after the hurricane, before the work group began in March.

“Our working group was established to do one specific thing, and we did just that thing,” McBrayer, the county’s emergency coordinator, said. “We looked from March to present day, and so we believe those numbers and the review and verification of that information is there. Prior to that, I don’t think we can speak on that.”

Because he had not yet reviewed the report Monday, Patillo said he was looking forward to reading through it and digesting it this week.

“And I hope everybody with concerns takes a look at it,” he said. “I feel so strongly, and I think the commissioners do, too, that this is something that we have to learn from.”

Airport commissioners also asked if recoverable depreciation funds related to airport property would be reinvested to the airport, greatly in part to ensure the airport remains complaint with the Federal Aviation Administration.

“To date, all the money that’s been received attributable to airport properties has been put back into the airport,” Zeller said. Additional funds from recoverable depreciation that come in and are related to the airport, Zeller said, will also be invested in the airport.

Ruschhaupt said following the meeting he was glad to hear that money associated with the airport would continue to be invested into the airport.

From the Advocate Editorial Board: Excuse does nothing to answer Harvey spending questions

Connect the dots. They form an alarming picture.