Victoria County officials set Monday a deadline of 10 days for a company that did millions of dollars worth of work after Hurricane Harvey to provide additional documentation.

Victoria County commissioners at their weekly approved a letter to the Virtus Group, the company that remains at the center of a controversy about whether the county spent Harvey recovery money in taxpayers’ interests. The letter asks for a list of documents related to an invoice for about $852,000. 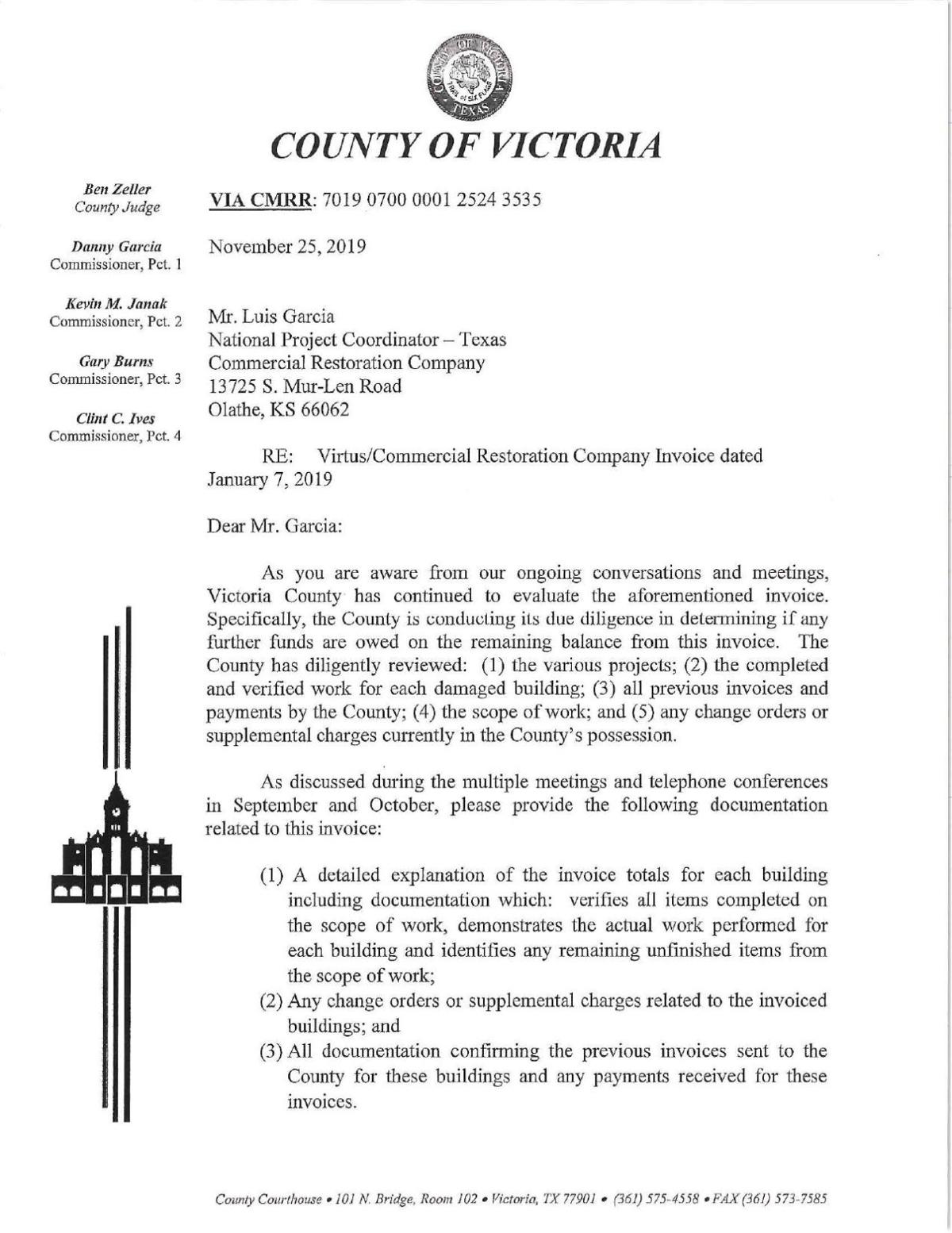 Before approving the letter, Victoria County Commissioner Kevin Janak updated the court about progress of the work group, which has been reviewing insurance documents, scopes of work, invoices and supplemental change orders regarding work done after the hurricane. He said Monday that the work group’s progress has been delayed by family crises.

Back in July, Janak said, the work group was about 95% complete – but it needed verification and certification of work that was done from Virtus, now called Commercial Restoration Company.

But the wife of the Virtus employee the work group was working with died suddenly this summer. That Virtus official was the only one who could answer questions the county had, Janak said.

“With that being said, I’d like to ask everyone here, as well as at home, how long do you allow a person to grieve after losing your best friend?” he asked the courtroom.

“How long do you wait to talk about someone that lost their best friend to the open public?” he continued.

Janak said while everyone may answer those questions differently, the work group decided to “carry this burden on our shoulders, knowing that the longer it took, the more questions it would raise.” Additionally, he said, he had personal circumstances come up that affected progress as well.

“What kind of person would I be to hound a person for information that we needed or even talk about it?” he asked. “I’m not that type of person. I wasn’t raised that way and didn’t raise our sons that way.”

County Commissioner Gary Burns said he understood the decision to give the Virtus employee time to grieve after his loss. But, he said, he wished Janak had explained the situation earlier “because every time that I go to the café, I get asked questions, and I think it’s legitimate.

“I understand the compassion, but it would’ve been nice if you said something earlier,” he said.

Janak said he thought the decision to wait was correct, morally and ethically, and was the best reflection of Victoria County and its employees.

“All the stones can be thrown at myself for that, but this is something we’ve had to bear on our shoulders for this whole entire length of time,” he said. 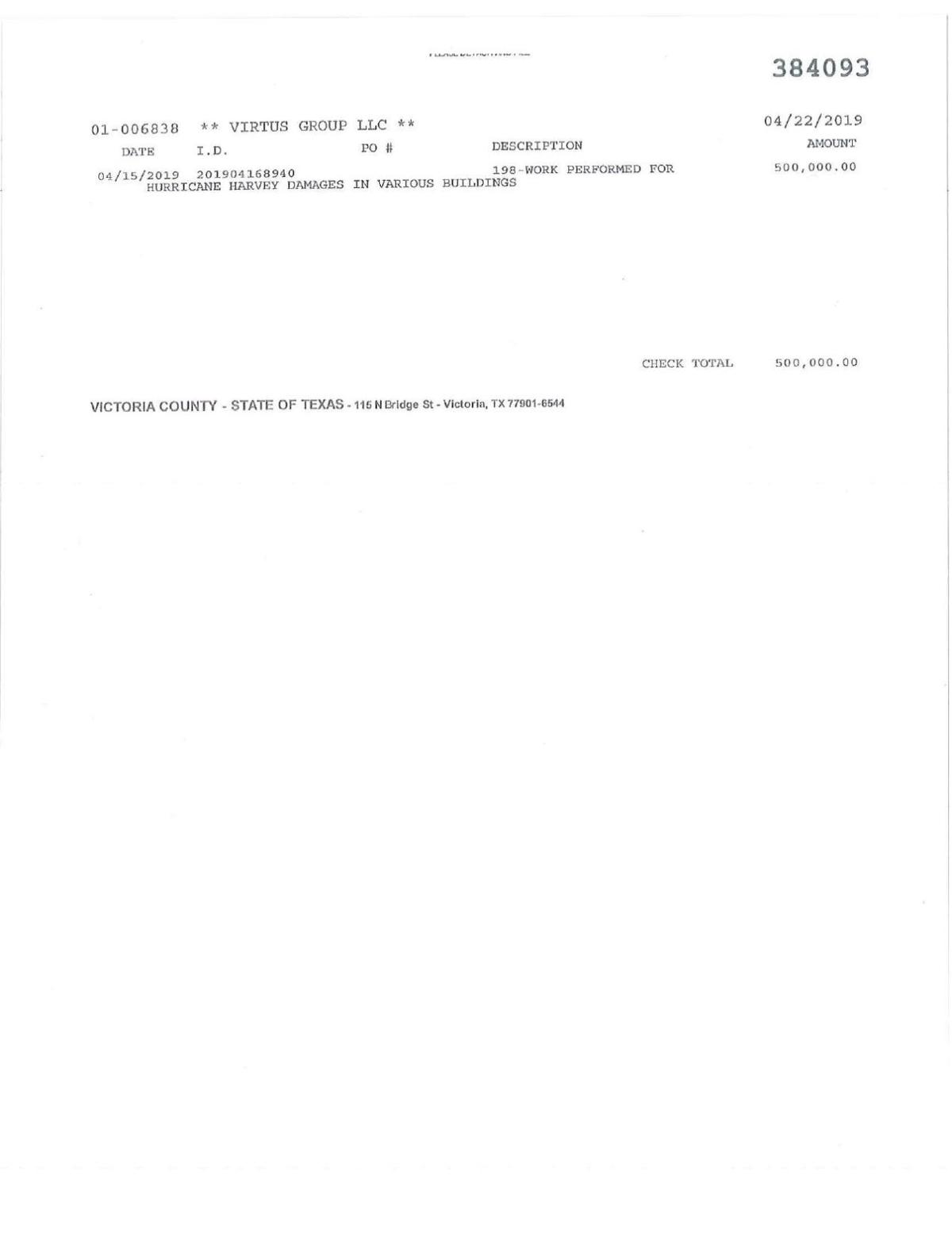 Janak said the work group asked why Virtus, which is based in Olathe, Kan., but has offices around the country, couldn’t send someone else to Victoria County to verify the work but remembered that the individual whose wife died was the employee who was involved with the county immediately after the hurricane. He said one other employee who was involved with construction in the county after the hurricane could not help because that person no longer works with Virtus.

When the work group felt that an adequate length of time had passed, Janak said, they considered sending the letter to Virtus around the time he asked county departments to send him information about work that is left undone but was possibly paid for after the hurricane.

But when Virtus showed up in Victoria County in October, employees said they would conduct an extensive review of the work done. Janak said the work group was “very hopeful” and delayed sending the letter.

But, he said, “to this date, after numerous phone calls, nothing has been provided, so now we move forward.”

The letter, which commissioners signed Monday and agreed to send, states the county has “diligently” reviewed the various projects; the completed and verified work for each damaged building; all previous invoices and payments by the county; the scope of work; and any change orders or supplemental charges currently in the county’s possession.

In the letter, commissioners request that Virtus provide the county with a detailed explanation of the invoice totals for each building, including documentation that verifies all items completed on the scope of work, demonstrates the actual work performed on each building and identifies any remaining unfinished items from the scope of work; any change orders or supplemental charges related to the invoiced buildings; all documentation confirming the previous invoices sent to the county for these buildings; and any payments received for these invoices.

This information was previously requested via email July 15 and Sept. 20, the letter said, and is “necessary for the county to receive the requested information in order to complete our review of this invoice.”

Commissioners requested that Virtus provides the information within 10 days. If it is not received by then, the letter said, the county will complete its review based on the documentation within its possession.

The county’s attorney, Eric Magee of Allison, Bass and Magee, said he assisted the work group in clearly outlining the requests to Virtus and authored the letter. After Virtus submits the information, Janak said, the work group will be able to finish its long-awaited report.

“Things will move rather quickly,” he said.

County Judge Ben Zeller was not present at Monday’s meeting.

Commissioner Danny Garcia thanked Janak and the work group for their efforts.

“It has made us look into maybe putting some structure into the way we do things, and this is a step in the right direction for us,” he said.

Both Victoria County officials and representatives of the Virtus Group, the company facing scrutiny over the county’s spending and management …

This is all very heartwarming, but totally ignores an even larger issue that won't be covered in any documentation from Virtus. That would be how the mysterious and likely illegal contractor selection process and subsequent very shady looking project management came about, and what's become of the lady who was in charge? Why was the Airport Commission left out and told to "stay out of it"? IMO and that of many others, this whole thing stinks of corruption, bribery, kickbacks and Good Ol' Boys & Girls; in other words, business as usual. That's what we want looked into by independent law enforcement. Why hasn't it been? Three guesses, and the first two don't count.

So Kevin Janak is a noble compassionate soul protecting a contractor during a personal loss. Or is he using it as a cover for delaying information that he promised for months was almost complete. In one stroke he becomes immune from criticism and deflects attention away from his fumbling stalling tactics. The problem is, I know personally how Kevin Janak treats people who are powerless. Compassion is the last word I would use.