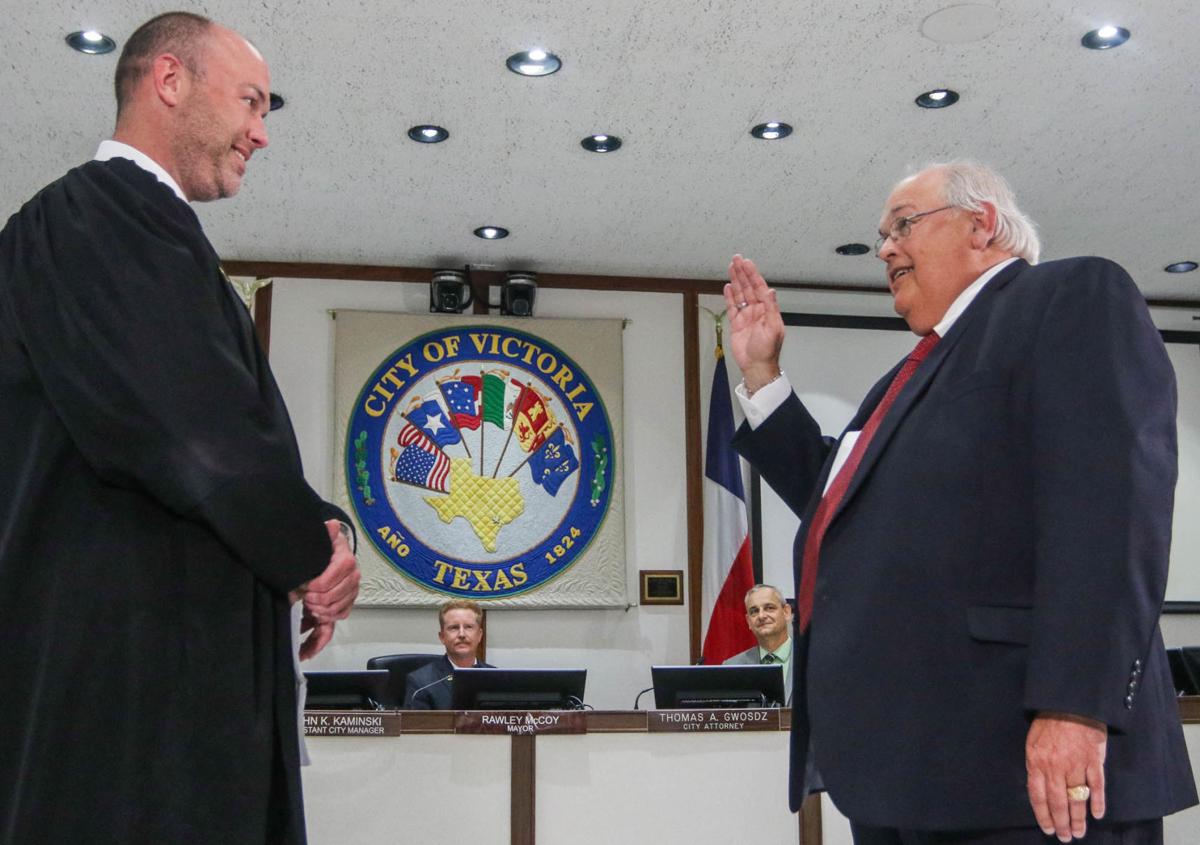 Timothy McCoy swears in his father Rawley McCoy as mayor during Tuesday's City Council meeting at the council chambers in Victoria. Timothy McCoy is a judge for Nueces County Court at Law 5. 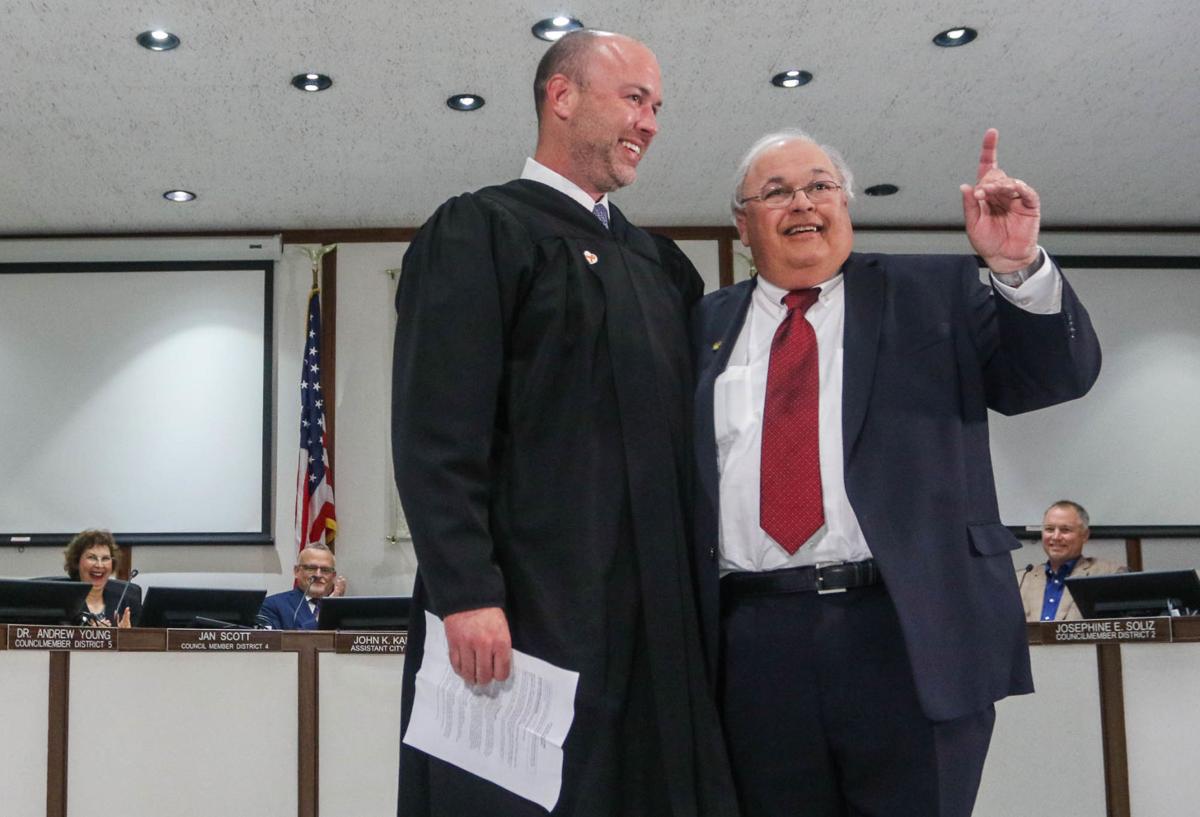 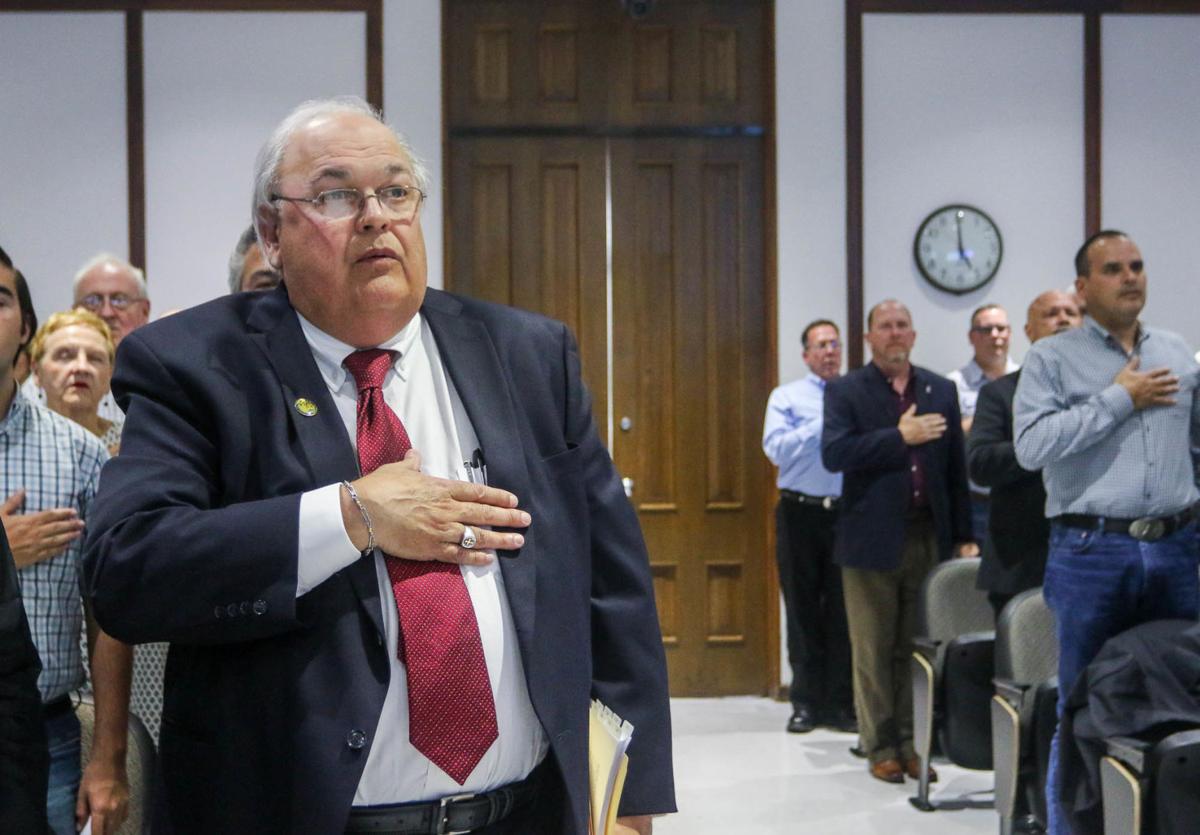 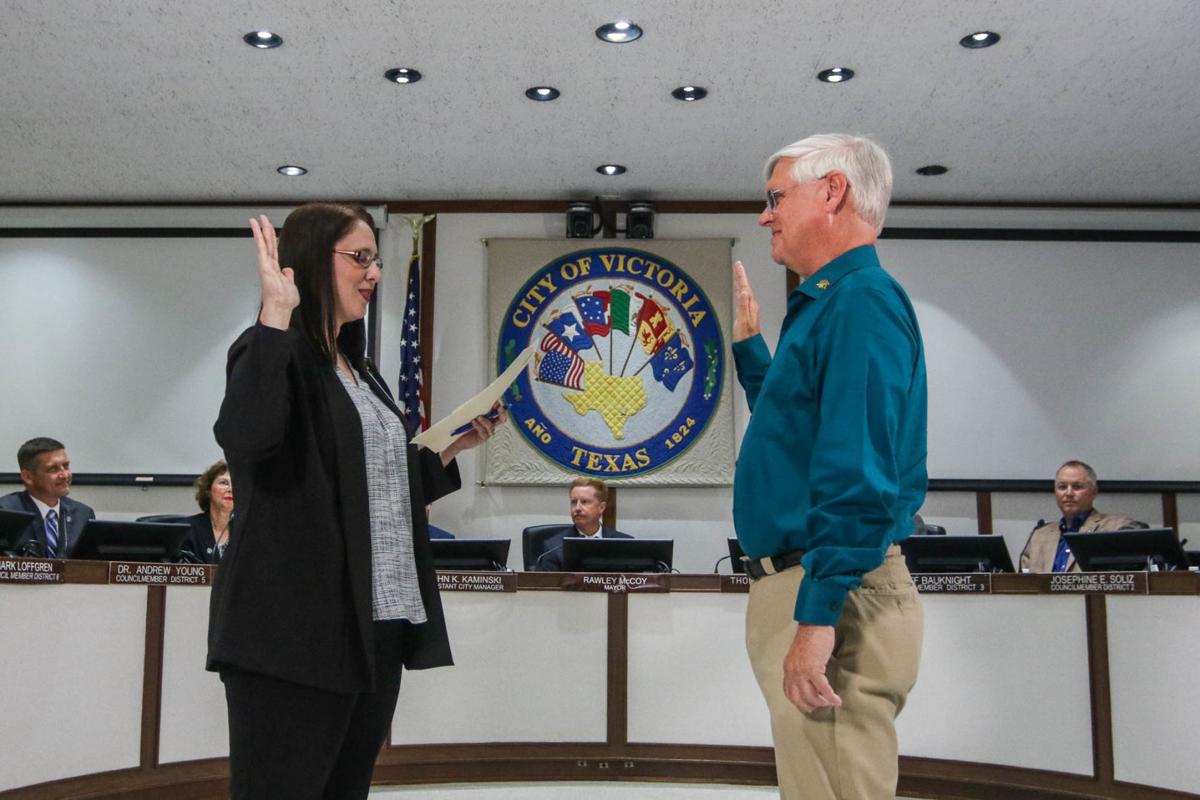 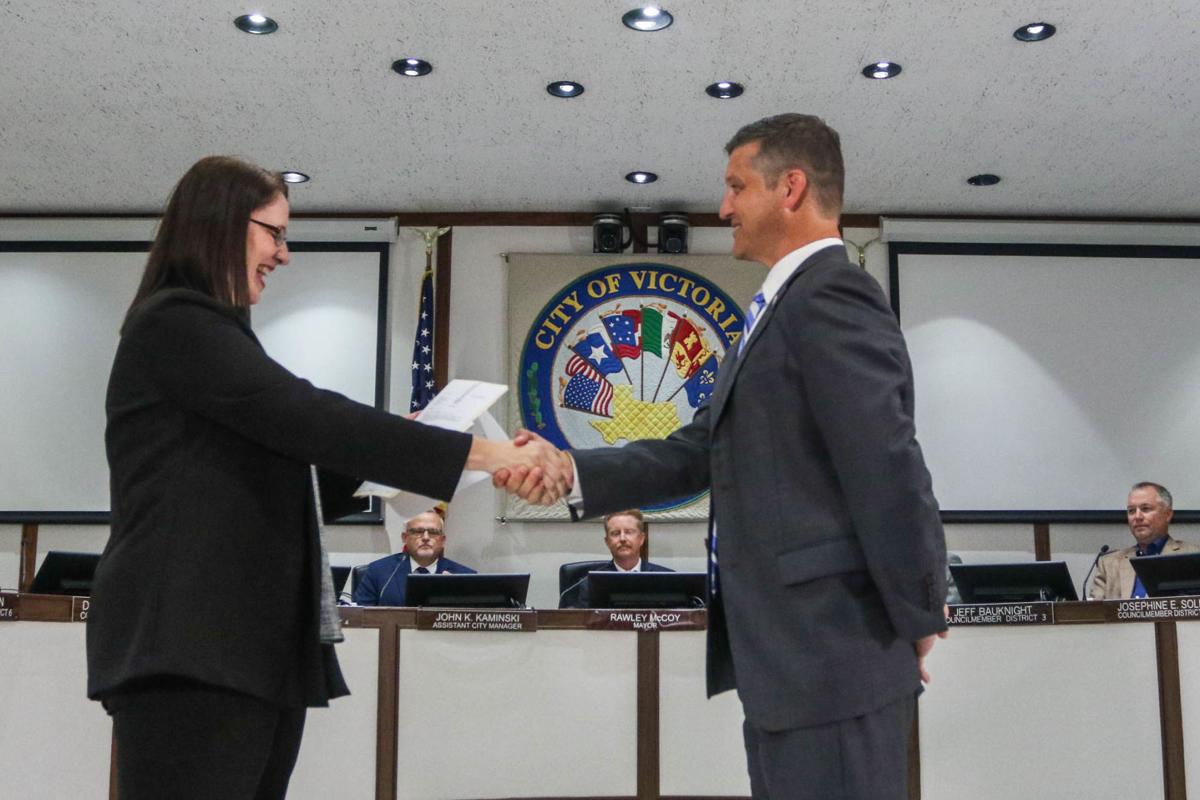 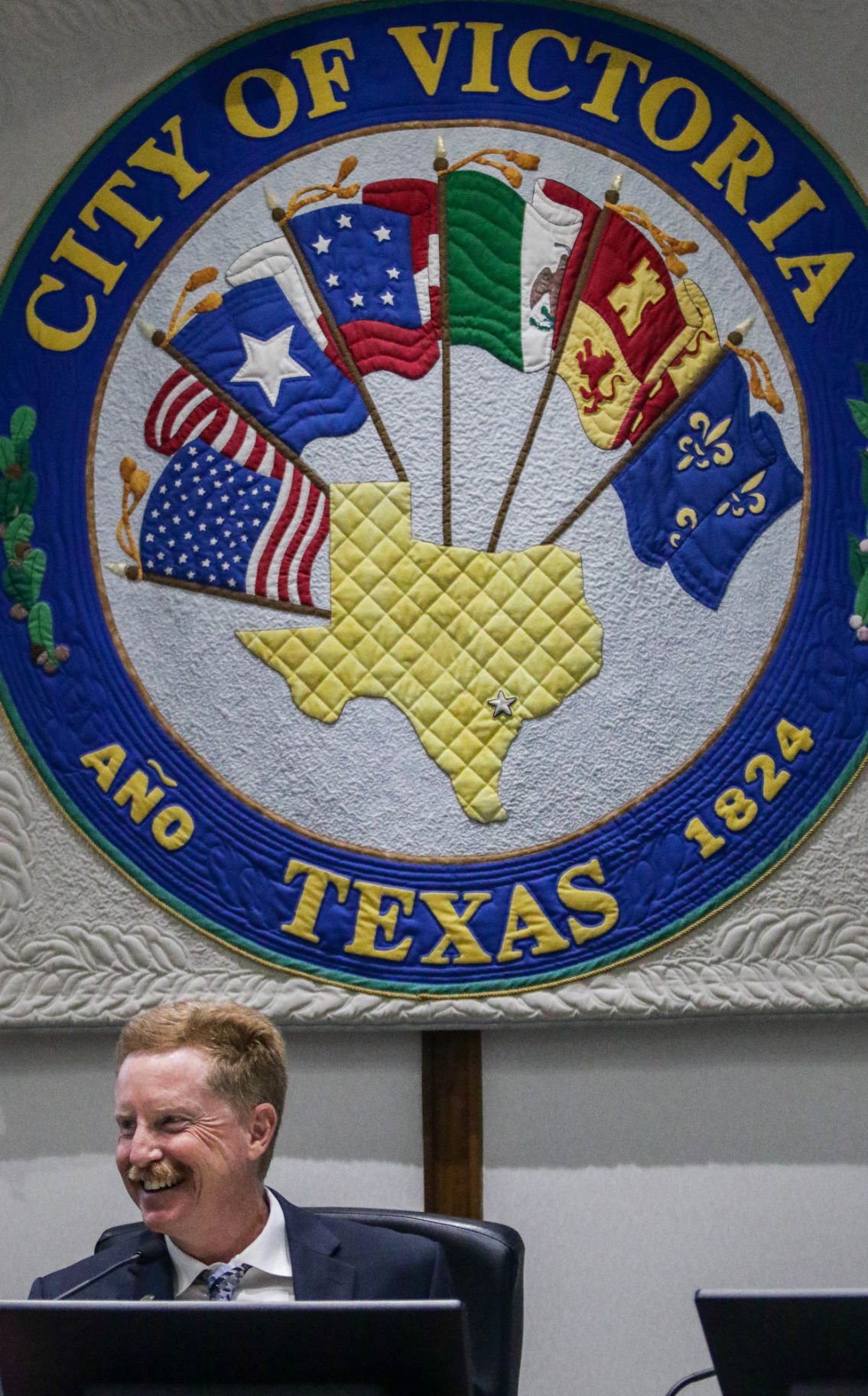 Timothy McCoy swears in his father Rawley McCoy as mayor during Tuesday's City Council meeting at the council chambers in Victoria. Timothy McCoy is a judge for Nueces County Court at Law 5.

McCoy, who was elected Saturday with 51.45% of the vote, was sworn into office by his son Judge Timothy McCoy, the judge for Nueces County Court-at-Law 5.

“I cannot express my gratitude any deeper than I feel tonight, to have been blessed to be chosen for this position,” McCoy said.

Outgoing Mayor Paul Polasek briefly presided over Tuesday’s meeting before McCoy was sworn in. He presented outgoing Councilman Tom Halepaska with a plaque for his 15 years of service on the City Council before both men stepped down from the dais for the final time.

After the new members were sworn in, council selected Councilwoman Josephine Soliz to serve as mayor pro-tempore, who acts in the mayor’s stead when he is absent.

The new council delayed a contract for the Crestwood Drive reconstruction project for a second time after a discussion about whether they could opt for a pricier contract that would have the project finished sooner. The city received three bids for the project. The cheapest, from Brannan Paving Company, would cost $4,136,157 and take almost one year and eight months to complete. The most expensive bid, from Triple B Services, would cost $4,217,596 and take one year to complete.

Young said “$81,439 is a lot of money. However eight months is a lot of time, and it would be my recommendation to go for the shorter amount of time for our public.”

City attorney Thomas Gwosdz said his office would need about two weeks to research whether the city could legally opt for a more expensive bid that would complete a public project more quickly based on the bid speculations.

The project will completely redo a half-mile stretch of Crestwood Drive between Laurent and Ben Jordan streets that has long been on the city’s to-do list for street repairs. It will include water and sewer lines, storm sewer improvements and sidewalks in addition to a new concrete road.

“I can think of quite a few street corners that I think that would be a great location for,” she said.

Cities throughout the U.S. have attempted to limit or ban panhandling outright, but such laws almost always face legal challenges and have historically been struck down or curbed by court rulings. Some cities, like Lexington and Bowling Green, Ky., and Houston, have installed signs discouraging supporting strangers asking for help at street corners or on roadsides. Lexington turned to signs discouraging panhandling after its own ordinance banning begging on public streets and sidewalks was ruled unconstitutional.

Loffgren asked for the council to discuss at its May 21 meeting whether the body’s start time at 5 p.m. was the best time for a public meeting.

Rawley McCoy to take office with majority of voters behind him

Architect Rawley McCoy will be Victoria’s next mayor after winning more than 51% of all votes cast in Saturday’s local election, according to …

Following years of conversations, resolutions and roadblocks, Victoria City Council on Tuesday will discuss authorizing and executing the Ben …