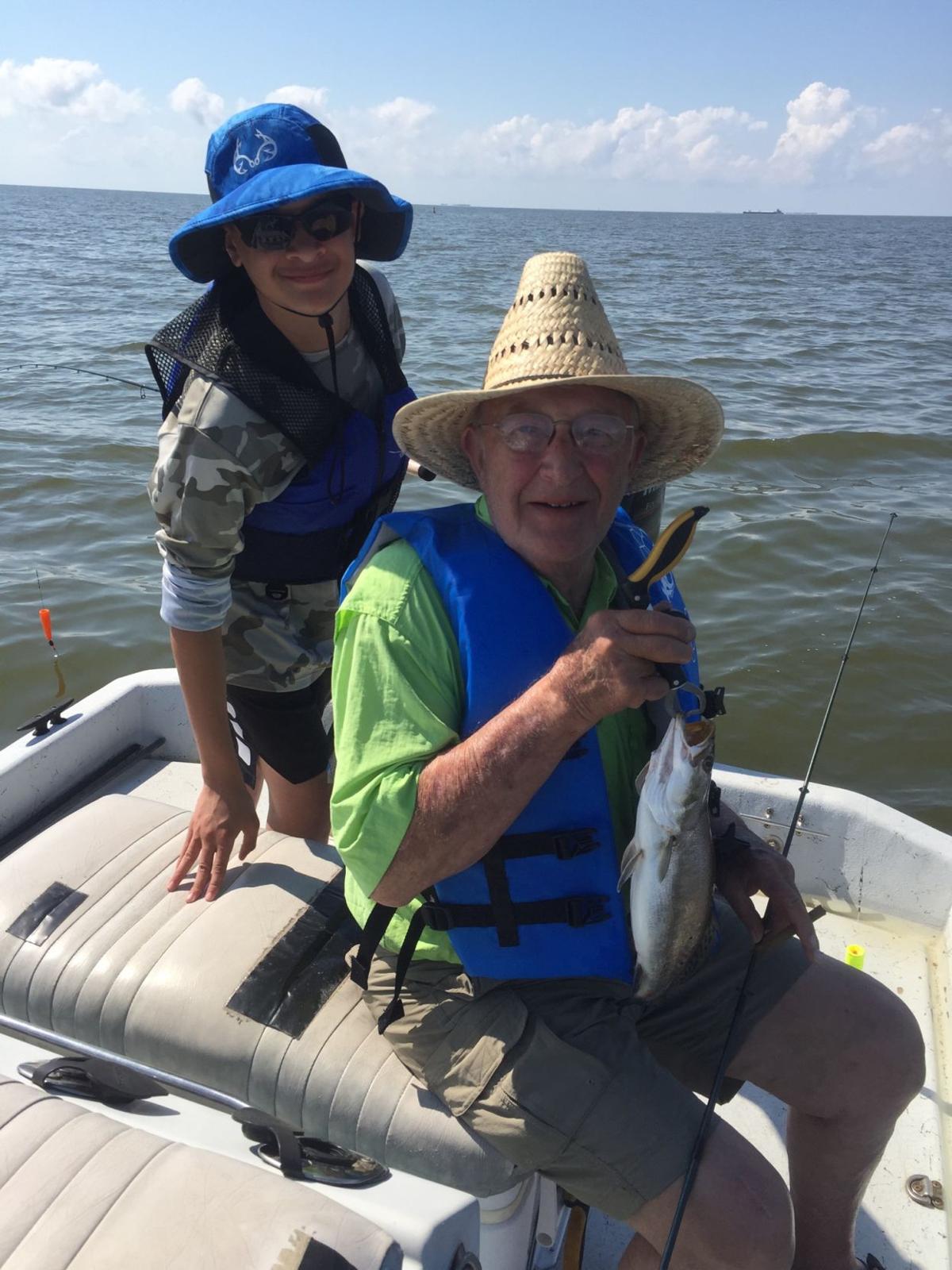 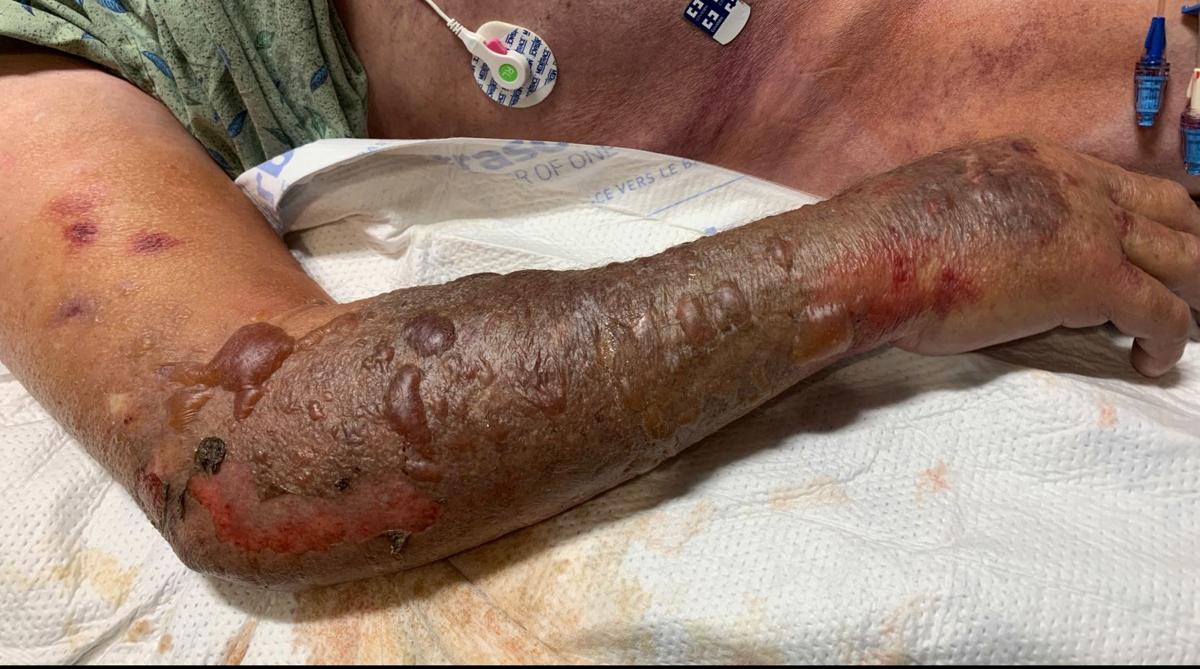 Palacios physicians thought cysts on Jerry Sebek's arm were the result of sunburn, but doctors in Victoria later determined it to be from Vibrio. He died about two weeks after contracting the infection.

Palacios physicians thought cysts on Jerry Sebek's arm were the result of sunburn, but doctors in Victoria later determined it to be from Vibrio. He died about two weeks after contracting the infection.

At first, physicians thought the Vibrio infection that would claim Jerry Sebek’s life was sunburn or heat exhaustion.

About two weeks after his unexpected death, she wondered whether his life might have been spared if the infection had been diagnosed sooner.

“I’m still in a lot of disbelief and shock and trying to figure out what happened,” she said.

While fishing aboard a boat with family in Turtle Bay, Sebek began to experience chills, vomiting, disorientation and labored breathing, his daughter said. His symptoms worsened after he reached the shore.

In July, a Victoria man died after being infected by the bacteria while crabbing with his family.

Neither Sebek nor that man had compromised immune systems, family members said.

Sebek’s family members took him to nearby Palacios Community Medical Center where physicians treated him for sunburn and heat exhaustion, said his daughter, adding the day had been hot and bright.

Hospital representatives did not respond to questions before publication of this story.

The next day, when cysts began appearing on one of his arms, Sebek was transferred to DeTar Hospital Navarro in Victoria, his daughter said. There, they diagnosed his vibriosis as resulting from the bacterial strain Vibrio vulnificus and began treating him with antibiotics.

“He was a very caring and gentle man,” said Kim Sebek, adding her father was an active church-goer, well respected in his community and a beloved family man.

While life-threatening Vibrio cases are rare, they do happen, said Brittany Burgess, an epidemiologist with the Victoria County Public Health Department.

In mild cases, a patient can recover within a few days, but more severe cases can result in death – particularly in those with weakened immune systems, she said, adding that anyone can contract the bacteria.

“If someone has liver disease, cancer, diabetes, HIV, is on immune-suppressing therapies or taking medicine to decrease stomach acid levels, or has recently had stomach surgery, they could be at a greater risk for an infection or having a severe complication to an infection,” Burgess said.

Infections can be contracted either by consuming the bacteria, which can live in sea creatures and seawater itself, or through the blood by direct exposure with sea water, according to the Centers for Disease Control and Prevention.

Vibrio is a bacteria that thrives in salt water, especially when temperatures are warm, according to the center. Additionally, about 80% of infections occur between May and October with about 80,000 Vibrio-related illnesses occurring each year in the U.S.

Symptoms from infections resulting from consumption include diarrhea, vomiting and abdominal pain.

Wound infections can produce a variety of symptoms that include blisters, ulcers, swelling, reddening around the wound, fever, sepsis and shock. When the bacteria infects a person’s blood, it can also cause a rapid onset of chills and fever, shock, decreased blood pressure and skin lesions.

Anyone suffering from a compromised immune system should consider avoiding seafood, and those at risk who may come in contact with marine water should wash their hands with soap and water rather than hand sanitizer and cover open wounds with waterproof bandages.

Although Sebek was not swimming on the day of his fishing trip, his daughter suspected he had touched the water.

Finally, if a person feels unwell after coming in contact with potential Vibrio sources, they should immediately seek help from a medical professional, Burgess said.

“It is extremely important,” she said.

While Vibrio may sound scary and unavoidable, Burgess said the disease does not mean Crossroads residents should wholly avoid marine areas. Instead, they should simply be aware of the risks and take safety precautions.

“Infections from Vibrio are still considered rare. Millions of people visit the beaches each year and never become ill,” she said.

How to stay safe

For additional information, check out an information page by the CDC.

Summertime heat in Texas leads many of us to the coast for some fun in the sun and marine time. Summer weather also brings higher risks for ma…