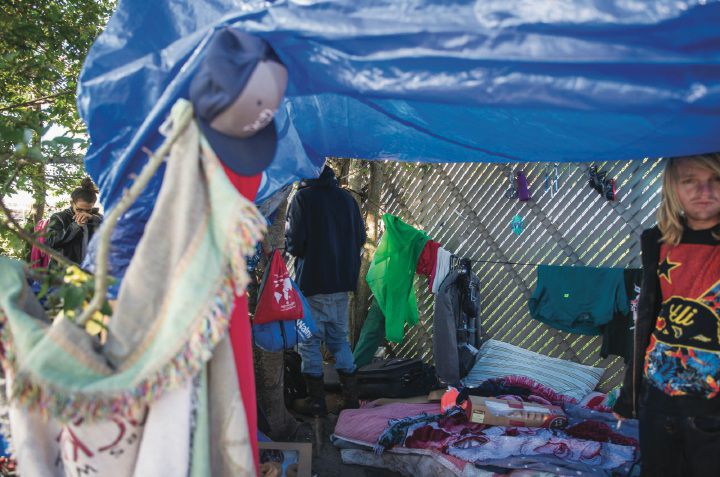 A makeshift tent accommodates four members of a homeless camp in Victoria. 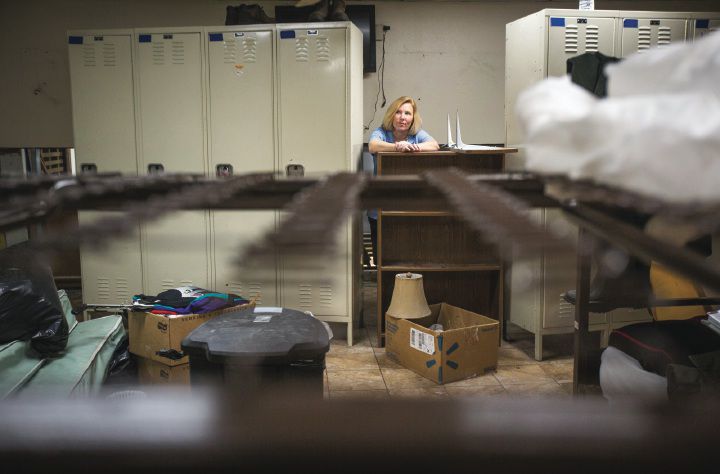 Maj. Laura Martin leans against a shelf in the men's dorm at the Salvation Army. 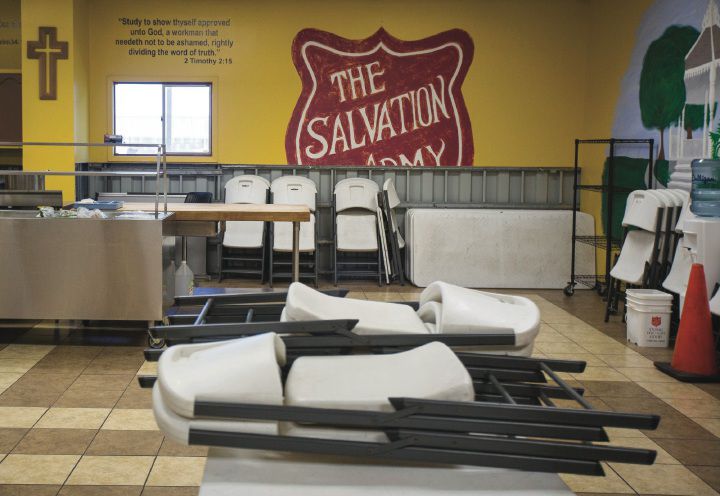 Ninety percent of the Salvation Army in Victoria was damaged by Hurricane Harvey. The shelter, thrift shop and kitchen have been closed since the storm, said the nonprofit's director, Maj. Laura Martin. 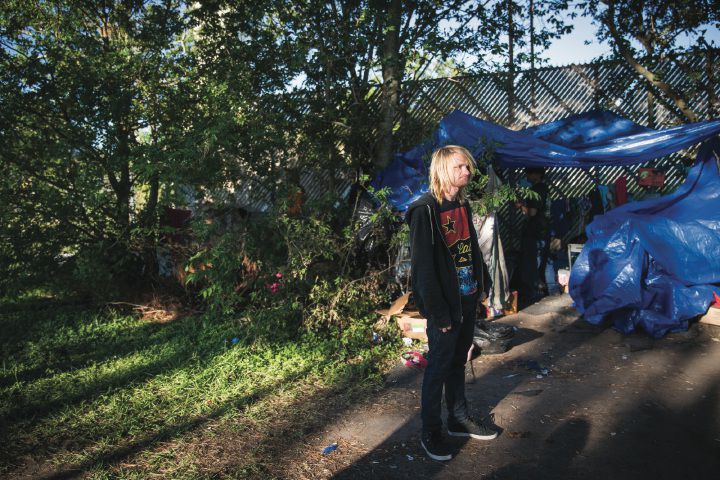 Matthew Steve Hoffman waits for the other members of his unit to rise Thursday morning. Hoffman lives with three people in a homeless camp in Victoria.

A makeshift tent accommodates four members of a homeless camp in Victoria.

Maj. Laura Martin leans against a shelf in the men's dorm at the Salvation Army.

Ninety percent of the Salvation Army in Victoria was damaged by Hurricane Harvey. The shelter, thrift shop and kitchen have been closed since the storm, said the nonprofit's director, Maj. Laura Martin.

Matthew Steve Hoffman waits for the other members of his unit to rise Thursday morning. Hoffman lives with three people in a homeless camp in Victoria.

A sign posted on the doors of the Salvation Army warns of its closure.

Maj. Laura Martin said the past few weeks have been heart-wrenching as the nonprofit works to recover from Hurricane Harvey.

"Every program I have is closed, and I cannot serve the public," she said this week. "It hurts my heart. I do not like to turn people away."

The loss of services impacts the city's most vulnerable population - the homeless and families on the brink of homelessness.

The Salvation Army is the city's only emergency shelter for men, and has a capacity to shelter 31.

About 90 percent of the building sustained water damage from the Aug. 25 Category 4 storm. Much of the drywall has been removed to prevent mold.

The nonprofit has been working with its insurance, and repairs could be completed within three weeks.

"I know a lot of people depend on us for that dinner every year," she said.

About 125 meals are served in-house and many plates are sent to known homeless camps and to first responders working the holiday. Ginny Stafford, executive director of Mid-Coast Family Services, said the community will need to rally to find a way to keep the Thanksgiving dinner tradition going.

For those living on the street, the dinner is more about not having any family connection.

"I can't imagine anything worse than being alone on a holiday like that," she said. "With or without a meal, you don't want to be alone."

Martin said she was having dinner with her three teenage sons recently when she noticed a homeless encampment appears to have grown in size.

She's been working to find housing for the homeless men who evacuated from the shelter during the storm, but there are no places available.

Many of those men are working and want to stay in the area, she said.

That camp that Martin saw on the city's north side is a makeshift shelter for between five and 10 people.

Kelly Franklin, 47, has regularly visited this camp to bring hot meals and other necessities.

Her sister, Kim Pickens, is a longtime homeless advocate, but she started helping this group after her 15-year-old daughter wanted to help a man they saw standing near the highway.

Franklin is a single mother with two children at home and helps as much as she can along with assistance from Our Saviour's Lutheran Church.

"He's a good kid trying to make his way," she said.

In a parking lot nearby, people live in their cars.

"They take care of each other," Franklin said.

Because the men's shelter is closed, they don't have anywhere to go even if they wanted to leave, she said.

The emergency shelters for women and children in Victoria are also full.

A woman who stays in the encampment said she's been there "long enough" and they need a home.

Before leaving, Franklin told them she'd return with some heavier jackets and another first-aid kit.

Homeless advocates are worried about where these people will go as the weather gets colder and the Victoria Area Homeless Coalition is already planning for the annual Point in Time homeless count in January.

"Like a lot of nonprofits, people don't realize the breadth of everything Salvation Army does," Stafford said. "Besides the shelter, they also have a nightly meal for people who struggle with food insecurity."

The number of people needing help for food in the Crossroads has at least doubled, according to the Food Bank of the Golden Crescent.

In response to Harvey, the state issued its Disaster Supplemental Nutrition Assistance Program or D-SNAP, in which 11,161 households in Victoria County were approved for benefits. Before the hurricane, Salvation Army's soup kitchen served a hot dinner for up to 60 people every weekday and also offered emergency financial assistance.

Before the storm, Martin was working to expand services to include emergency shelter for women.

She's not sure how to raise the money yet, but that's still her goal.

She and her husband Mark Martin were commissioned in 2012 to be commanding officers in Victoria.

Almost two years ago, she learned how kind the community could be in the weeks after Mark died of lung cancer.

"I love Victoria. The people of this community helped me when my family was in need," she recalled.

Martin said she is hopeful the city will come together to support the Salvation Army as it recovers from the hurricane.

Every day the center is closed, she worries about the people who rely on its services.

"It tears me up because my calling tells me to serve their needs," she said.

Day 4: 'We thought we were going to die'

Day 12: For some, normal still far away

Day 16: Displaced and in disarray

Day 29: Methodist church serves those in need after hurricane

Day 33: After Harvey, Seadrift couple forced out of home

Day 36: VISD students observe See You at the Pole

Day 38: Woodsboro pulls together after Harvey

Day 47: Officials have no details on housing relief

Where to get water, gas and other supplies

Helpful information after the storm

Imagine a beautiful community of tiny houses. Each one energy-efficient and affordable with a porch out front. Bicycles are left unchained. Th…