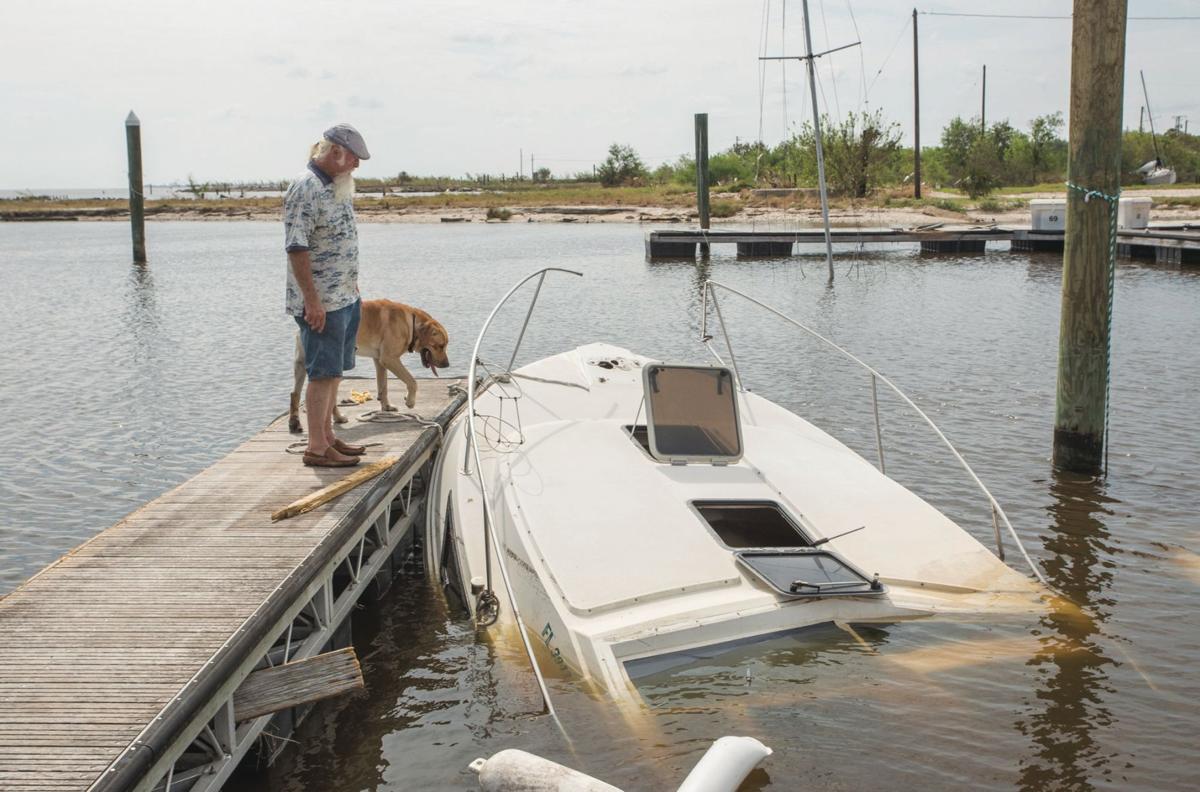 Jerry Burklund, 75, and his dog Luke look at his sunken boat. He lives on a different boat in the Port Lavaca marina. "Who needs two boats anyway?" Burklund joked. 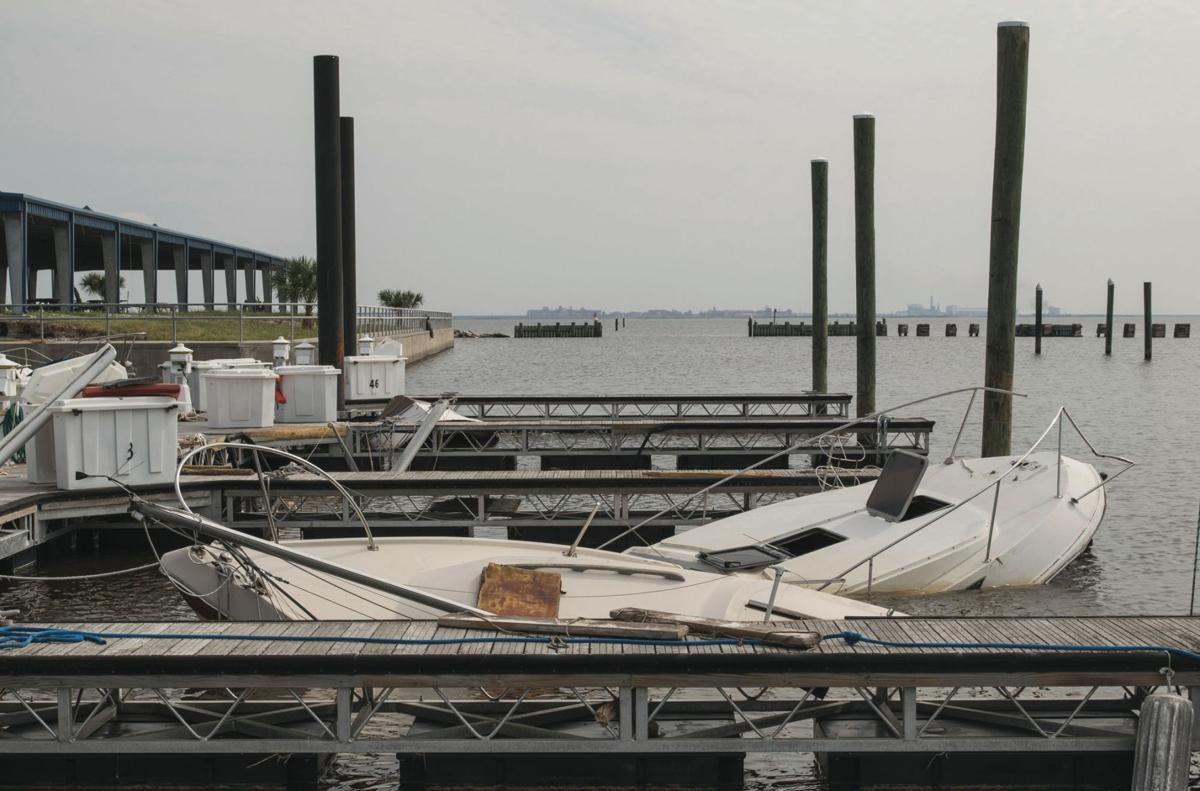 Boats destroyed by Hurricane Harvey rest at the bottom of Nautical Landing, a Port Lavaca marina. 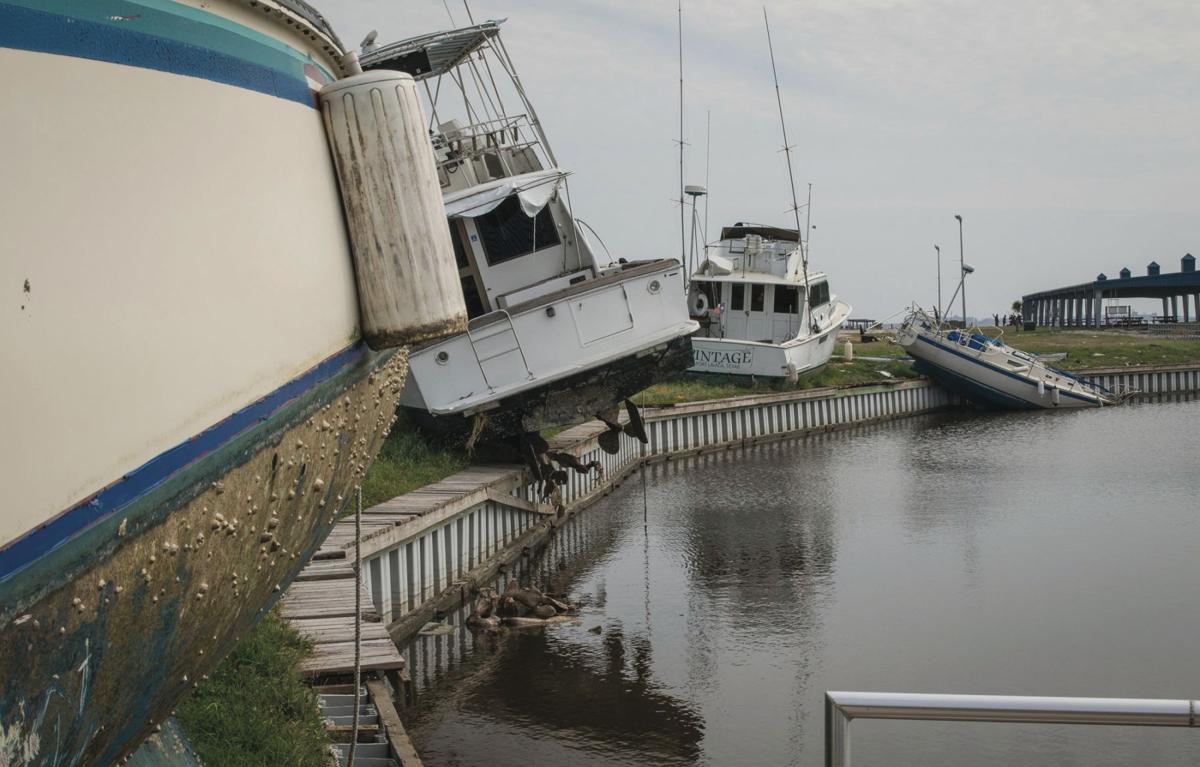 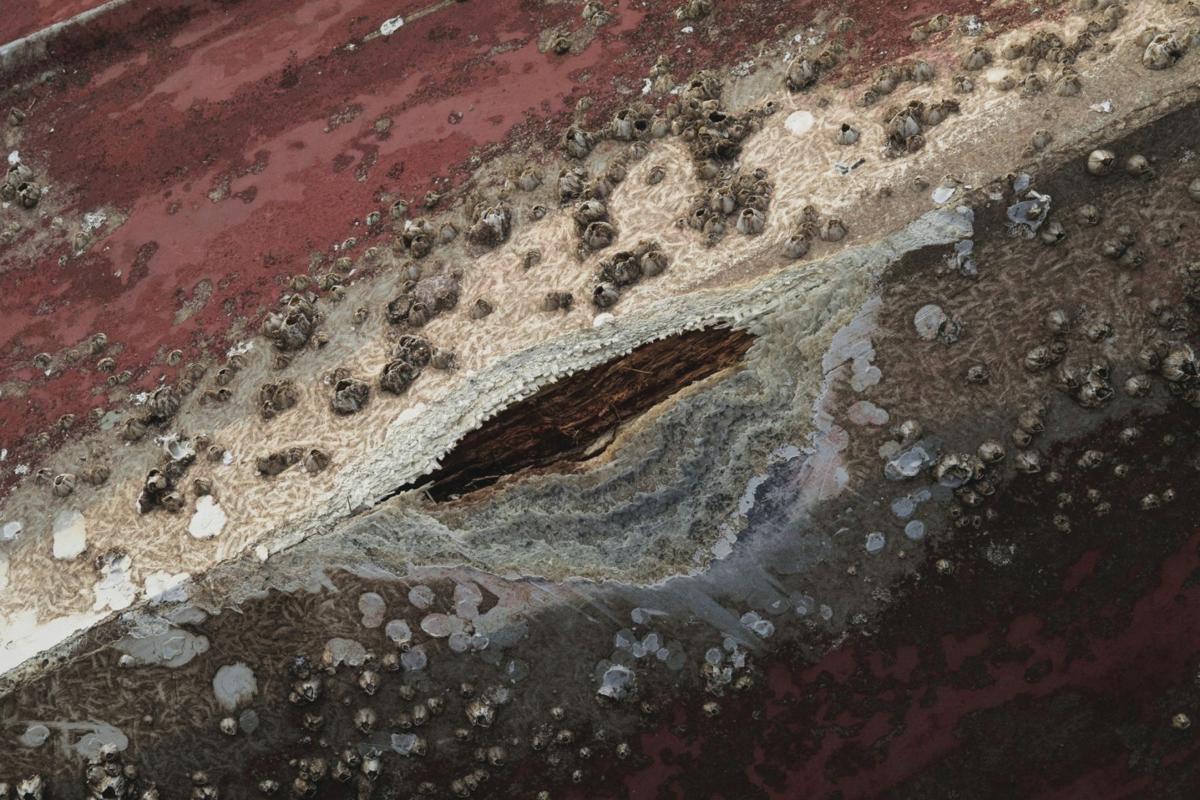 The bottom of an overturned boat that split in two during Hurricane Harvey rests in Nautical Landing, a Port Lavaca marina.

Jerry Burklund, 75, and his dog Luke look at his sunken boat. He lives on a different boat in the Port Lavaca marina. "Who needs two boats anyway?" Burklund joked.

Boats destroyed by Hurricane Harvey rest at the bottom of Nautical Landing, a Port Lavaca marina.

The bottom of an overturned boat that split in two during Hurricane Harvey rests in Nautical Landing, a Port Lavaca marina.

"That boat had a lot of stories attached to it," Burklund said Wednesday as he looked down at his Carver Montego boat sticking out of the brown pier water.

Burklund, 75, had spent several years traveling through the Florida Keys on the boat, he said.

He's scuba-dived on the Carver Montego and has caught several types of tropical fish, such as barracudas, mahi-mahi and sharks.

It has central air-conditioning and two engines. It was a good, fast boat.

It now lies in limbo between the air and sea.

"It's unfortunate, but what can you do?" Burklund said as an unopened can of Diet Coke floated out of his boat. "It had a good run."

Burklund, like many others in the Crossroads affected by Hurricane Harvey, is in the restoring and rebuilding stage, post-Harvey.

His Carver Montego is a total loss, he said. It's one of several boats that have sunk after the storm surges and wind hit Calhoun County. Several boats remain washed ashore several feet from where they stood prior to the hurricane. Tall masts sticking out of the water serve as an identifier of other boats that weren't able to stay afloat.

Burklund has been working on his other boat, a 40-foot yacht trawler, which also sustained some damages but survived.

"Some things can be fixed, and some things can't. There's not much you can do when a hurricane hits," he said.

The city though, is nearly up and running again, said Port Lavaca Police Chief Colin Rangnow. The focus of this week has been getting kids back to school, which started Monday for the first time since Hurricane Harvey.

"Things are slowly going back to normal," Rangnow said.

Ladonna Thigpen, the emergency management coordinator for Calhoun County, echoed Rangnow. She said the city and county are slowly getting back on their feet.

There aren't any shelters available for displaced residents, but officials are referring residents affected by Hurricane Harvey to the Federal Emergency Management Agency for recovery assistance. Power has also been restored to most in the county. The area has also received donations through charitable organizations from throughout the state and the country, she added.

"We're taking it one day at a time. Everything is getting better little by little," Thigpen said.

One Port Lavaca native, though, feels the small coastal communities south of Houston have been forgotten.

Sylvia Mendoza, 62, was born and raised in Port Lavaca and has been living in the Austin area for about 30 years. She and her husband, Jesse, still have family, friends and property in Port Lavaca, and return often to the town.

While she is proud of how the community has banded together to help each other after Hurricane Harvey, she worries about displaced residents and those who have been denied assistance by Federal Emergency Management Agency.

Mendoza said she grew frustrated with the lack of attention the people of Port Lavaca, Tivoli, Seadrift and Austwell and other small communities receive after the hurricane from national media. She found the lack of coverage to be unfair.

"It's very frustrating to hear these people say that they've been denied help but don't have a place to live," Mendoza said Thursday. "They feel forgotten."

Over on the other side of Port Lavaca, a couple of tents were set up in the parking lot of Walmart Supercenter.

Piles of clothes and shoes, ranging from infant to adult sizes, were available for those in need. The donations, which also included toiletries and mattresses, were donated by residents in St. George, Utah, said Christy Thedford, a Walmart associate.

"This is all because people from Utah wanted to make sure people in Texas were taken care of. It's amazing," Thedford said.

Thedford, who led the makeshift distribution center, said about 20 twin-sized mattresses were also donated to residents in the area who lost everything. Plastic bags were available so residents were able to pick and choose whatever they needed, she said.

April Roberts, of Point Comfort, was also looking through the clothes to see whether there was anything she could take for any of her three children. Most of their clothes were ruined when the roof of her home caved in.

"I washed the clothes several times but they still smell like mildew," Roberts, 36, said.

Roberts' home sustained damages from wind and water - the corners of the roof caved in, mold is growing in three areas in a bedroom and ceiling tiles are barely clinging to the roof, she said.

Dust from the Alcoa disposal pit has found its way into her home as well. The family tried to stay in the home, but the mold-infested atmosphere gave her children hives. They've been staying in her grandmother's trailer, she said.

"We're fortunate that my grandma let us use her trailer. But others aren't so lucky," Roberts said.

Roberts' family of five was denied by the FEMA, she said, so then they tried to get a loan through the Small Business Administration but were also denied.

Now, they have to appeal FEMA's decision. Though FEMA offered to put her family up in a hotel, the nearest one was in Gonzales, more than an hour away.

Until she is able to hire a contractor to inspect her house, Roberts and her family are in home limbo.

"That's all we can do right now - wait," Roberts said.

Day 4: 'We thought we were going to die'

Day 12: For some, normal still far away

Day 16: Displaced and in disarray

Where to get water, gas and other supplies

Helpful information after the storm

Despite Harvey, Bootfest will go on

What happens to our fine-feathered friends during storms?

An open letter to all who helped

What is the most important lesson you learned from Hurricane Harvey?