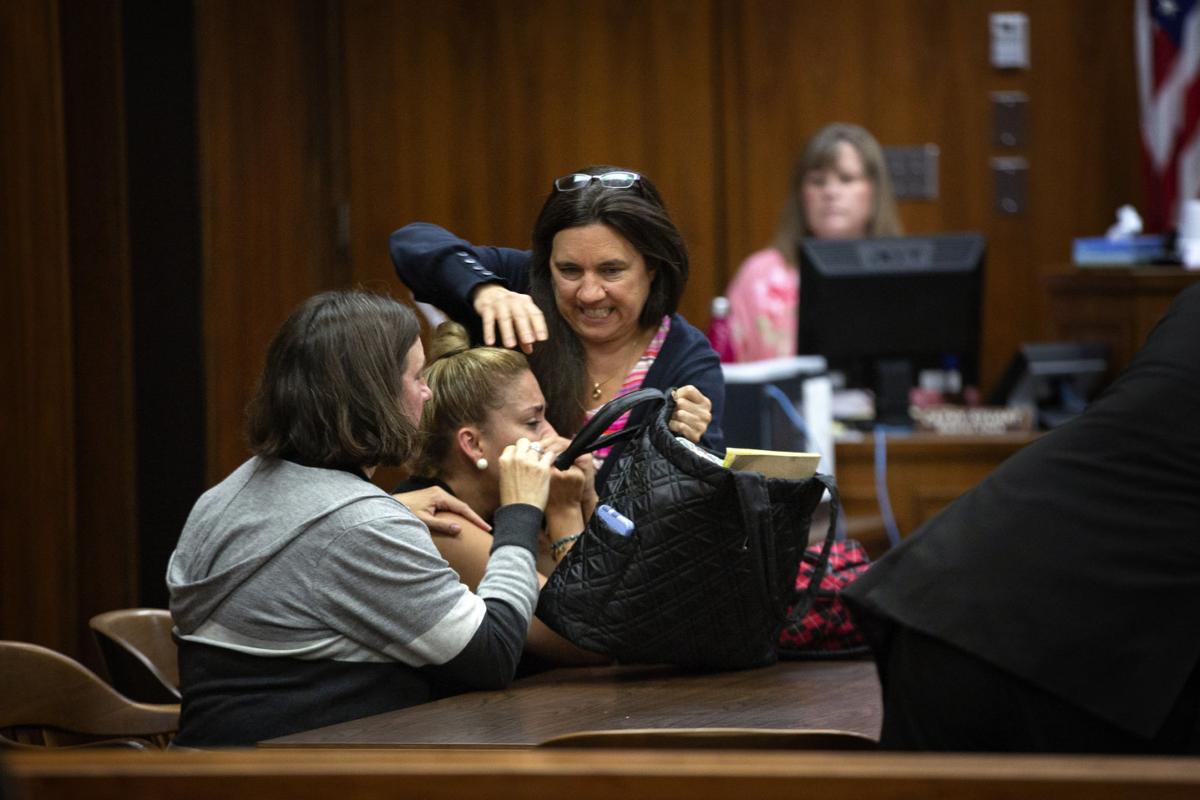 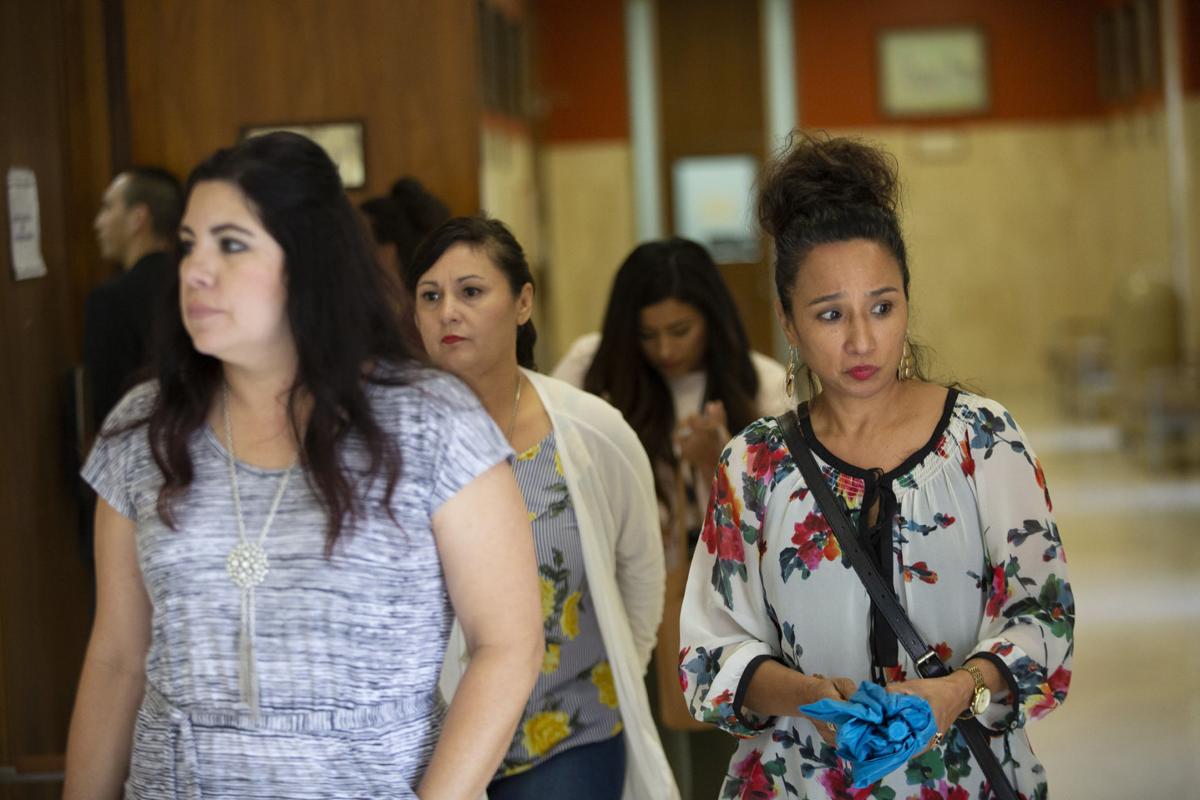 Texas Department of Protective and Family Services employees leave the courtroom after the verdict in the custody trial of 22-month-old Aniya Blu Vasquez, the daughter of Anita Vasquez, 36, of Victoria. A jury composed of an equal number of men and women terminated Vasquez's custody rights Friday. 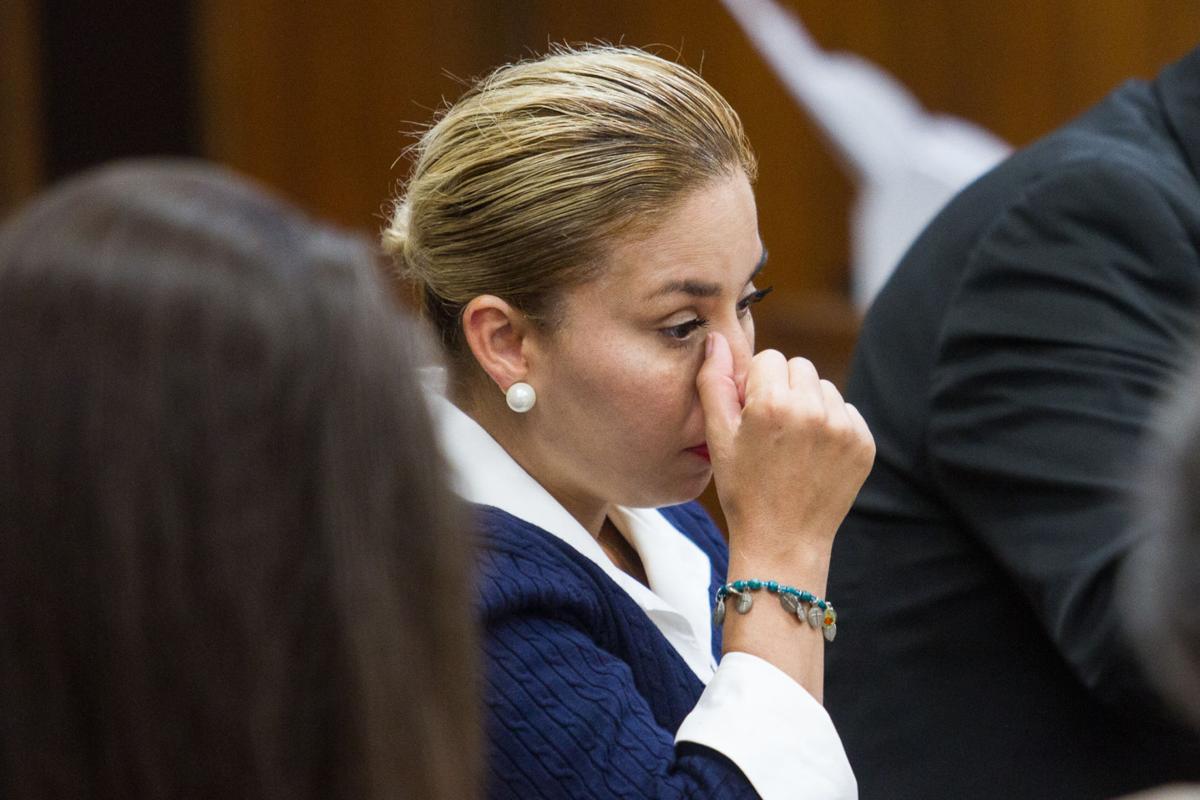 Anita Vasquez, 36, waits for the trial to begin at the Victoria County Courthouse. Vasquez is fighting the Texas Department of Family and Protective Services for the custody of her 22-month-old daughter, Aniya Blu Vasquez.

Texas Department of Protective and Family Services employees leave the courtroom after the verdict in the custody trial of 22-month-old Aniya Blu Vasquez, the daughter of Anita Vasquez, 36, of Victoria. A jury composed of an equal number of men and women terminated Vasquez's custody rights Friday.

Anita Vasquez, 36, waits for the trial to begin at the Victoria County Courthouse. Vasquez is fighting the Texas Department of Family and Protective Services for the custody of her 22-month-old daughter, Aniya Blu Vasquez.

Testimony from the state’s medical experts was enough to convince a jury that a Victoria mother should be separated from her 22-month-old daughter.

They also listened to pleas from attorney Allen Lowe, who represented the Texas Department of Family and Protective Services.

“Keep Aniya safe,” he said to jurors during his closing argument.

After about four hours of deliberation, jurors terminated the parental rights of 36-year-old Anita Vasquez for her daughter, Aniya Vasquez.

At the reading of the verdict, Vasquez broke down in sobs. At least one juror also wept.

“The system is so rigged that appeals are almost never successful,” said Vasquez’s attorney, Chris Branson, of Houston. “So this is probably the end of the road here.”

In spite of that prediction, he said Vasquez will likely appeal the decision.

Throughout the case, attorneys fighting for the termination of Vasquez’s parental rights said Branson’s arguments were attempts to cloud the opinions of experienced medical professionals.

“Do not get distracted,” said Esperanza Barron, a private attorney representing Aniya during her closing argument to jurors before their verdict.

Instead, she and attorneys representing the Department of Family and Protective Services asked jurors to provide a safe home and guardian for the child.

A psychiatrist, who testified Wednesday, diagnosed Vasquez in 2017 with Munchausen syndrome by proxy, a form of abuse in which a person seeks attention by faking or creating an illness in another person, often their child.

Although the department has forwarded their findings to the Victoria Police Department, Vasquez is not charged with a crime relating to harming her child.

During his closing argument, Lowe pointed to a timeline that showed Aniya’s health sharply improved when she was under observation and out of her mother’s custody. He described that timeline, despite its inability to explain exactly how Vasquez harmed her child, as clear and convincing evidence.

“They are asking you to make an assumption,” Branson said to jurors.

Because of the seriousness of their charge, jurors could only order the termination of custody if there was “clear and convincing” evidence showing she had endangered her child or violated requirements set by the Department of Protective and Family Services.

According to testimony from social workers, Vasquez was ordered to follow the recommendations of a psychiatrist and a plan outlined by the department. She did not, a case worker testified.

Branson further attempted to widen jurors’ doubt about the cause of Aniya’s low sodium levels, inability to gain weight and hospitalizations. He pointed to an HPV vaccine accidentally injected into the baby’s bloodstream in December 2017 by a Victoria doctor, a few months before her complications began, as one possible cause.

Lowe reminded jurors that doctors had testified that no documented connection existed between the HPV vaccine and medical complications suffered by Aniya.

Furthermore, Aniya’s health improved despite the vaccine after the child was removed from her mother’s custody.

“The HPV vaccine is still inside (Aniya), yet she’s thriving,” Lowe said.

Branson disagreed with that perspective, arguing there was insufficient medical evidence to determine the HPV vaccine, which was meant for Vasquez’s 14-year-old son, is harmless in infants.

In the end, jurors were convinced Vasquez posed more danger to her child than the vaccine. Aniya is currently under the care of her paternal grandparents and is now healthy, happy and thriving, caseworker Megan Morales testified.

But Branson wondered whether the state would keep Aniya with her grandparents or put her up for adoption. Aniya’s father has ceded custody of the child, according to court documents.

“She is now a ward of the state,” Branson said.