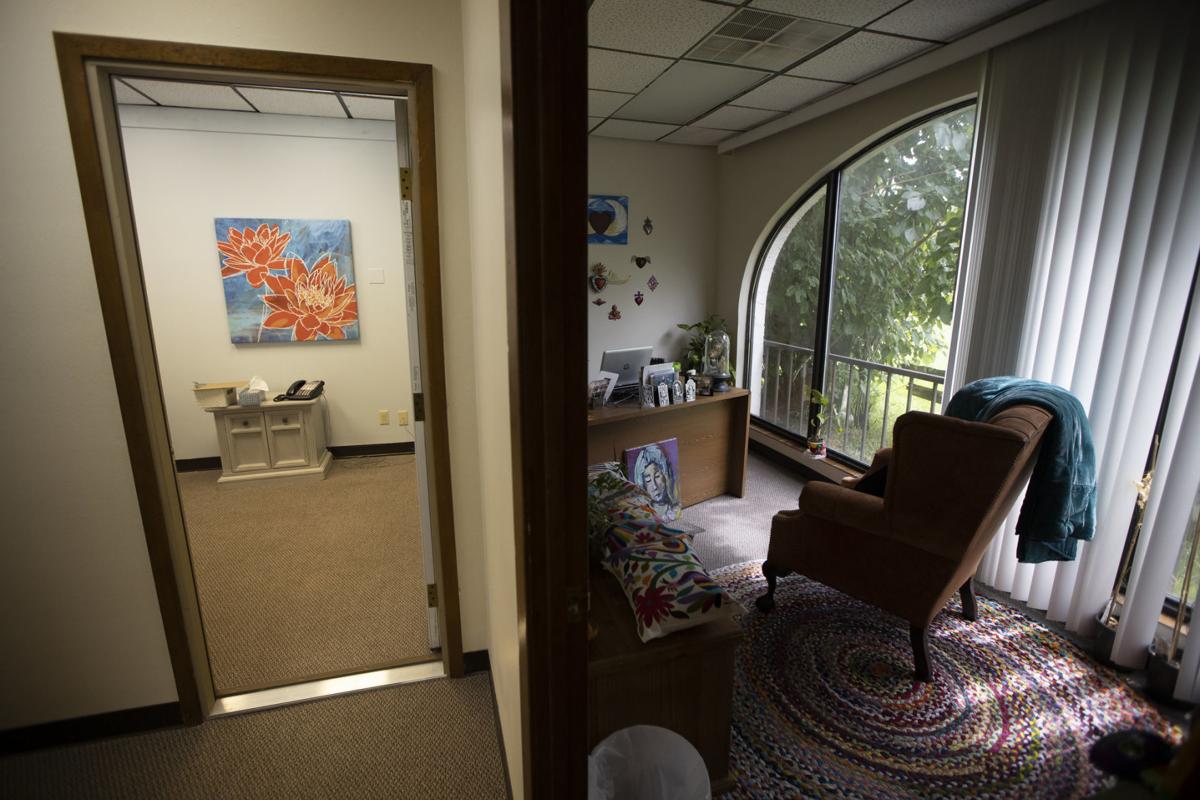 Michelle Rubio’s office shares a wall with the forensic interview room at Hope Child Advocacy Center, a nonprofit that provides a safe space for children to tell their stories of abuse and receive therapy. Rubio has been the lead forensic interviewer at Hope since the facility reopened in 2013. 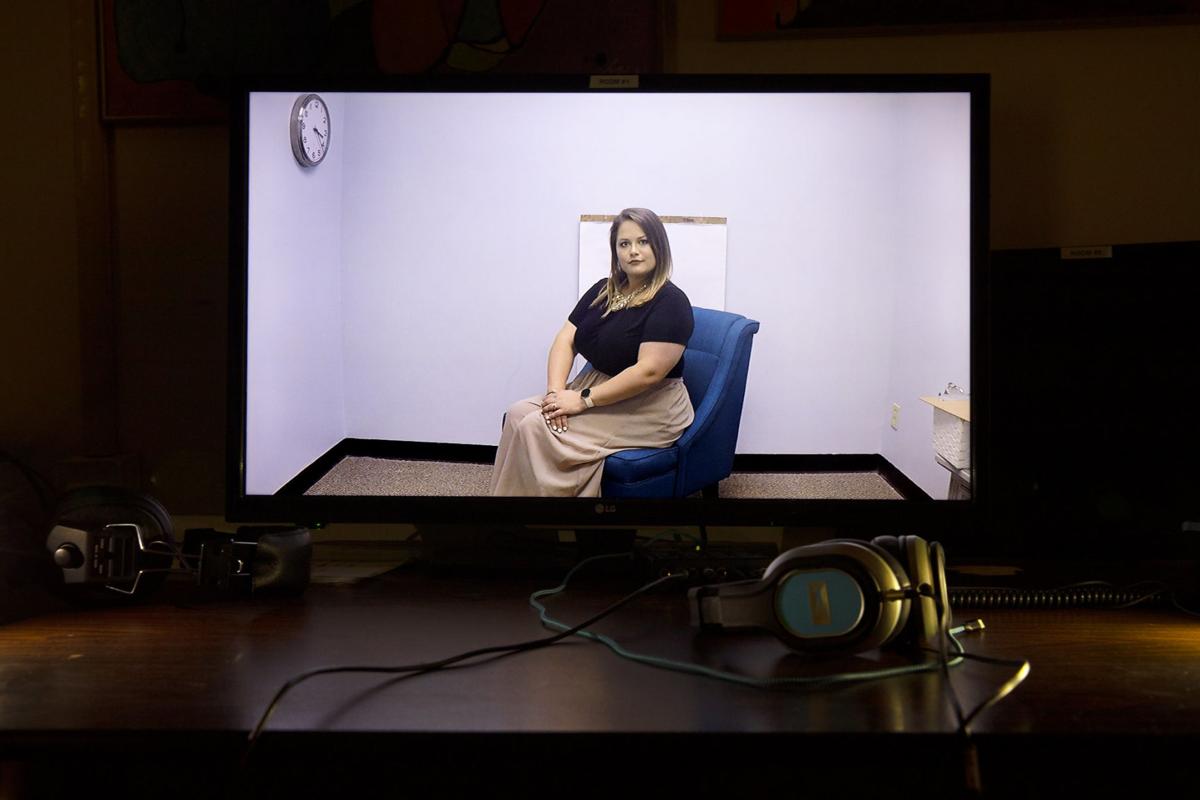 Megan Burow, family advocate, sits in the interview room where children talk about abuse they have experienced. Investigators watch the interviews from an adjacent room via a closed circuit camera system. 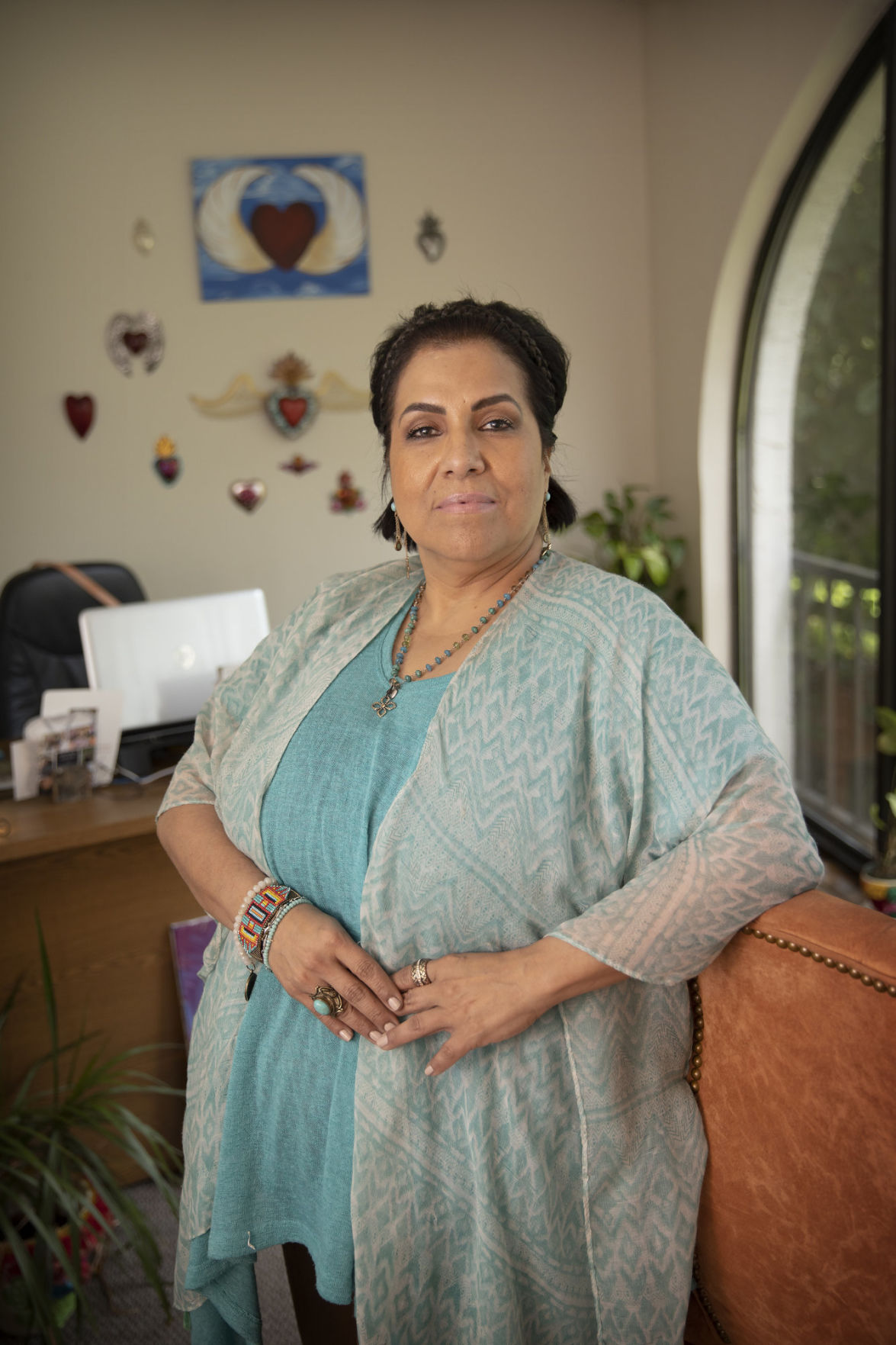 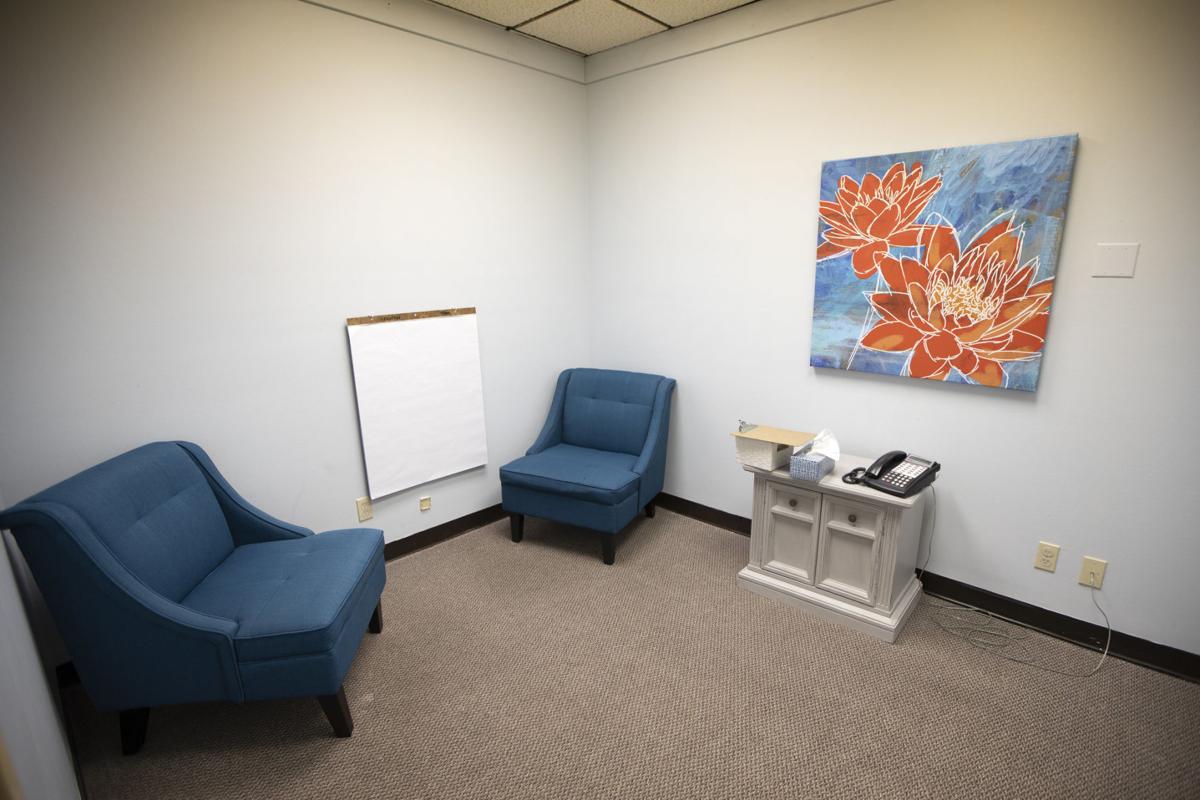 Across the room from two chairs in the interview room at the Hope Child Advocacy Center is a video camera, which is simultaneously watched by investigators in an observation room across the hall while children tell their stories of abuse.

Michelle Rubio’s office shares a wall with the forensic interview room at Hope Child Advocacy Center, a nonprofit that provides a safe space for children to tell their stories of abuse and receive therapy. Rubio has been the lead forensic interviewer at Hope since the facility reopened in 2013.

Megan Burow, family advocate, sits in the interview room where children talk about abuse they have experienced. Investigators watch the interviews from an adjacent room via a closed circuit camera system.

Across the room from two chairs in the interview room at the Hope Child Advocacy Center is a video camera, which is simultaneously watched by investigators in an observation room across the hall while children tell their stories of abuse.

An aroma of essential oils and self-made lotions kindles the senses upon entering Michelle Rubio’s office.

On the wall across from her desk is a tea station, open to any colleagues who need a moment to pause near brightly colored decor, illuminated by daylight that beams through a large picture window.

“There are three little squirrels that come and about six little cats who all have names, and the birds,” she said. “All of this is intentional; it reminds me, just the simplicity, that each child has such a difficult story.”

Rubio’s office shares a thin wall with the forensic interview room at Hope Child Advocacy Center on North Laurent Street, where children sit across from her on an almost daily basis and voice their experiences of abuse, overwhelmingly by someone they know, love and trust.

“On the other side, there are so many stories that I hear ... and there are some cases that are everlasting, that will never leave you. You have to have balance, you really do, because if not, it can become overbearing,” Rubio said while sitting in her office. She is Hope’s lead forensic interviewer.

The Hope staff is on call at all hours, year-round. Rarely does a day go by without an interview scheduled, he said. Sometimes the center sees up to eight or nine kids for interviews in a single day.

The center serves Victoria, Jackson, DeWitt and Goliad counties by conducting forensic interviews for children who have experienced abuse, mainly sexual, and by providing free counseling and advocacy services to those children until they are 18 years old.

To keep up with growing numbers, the center is installing a second interview room and paired observation room with the help of an audio equipment grant the nonprofit recently received from the Victims of Crime Act, or VOCA. The Victoria County District Attorney’s Office matched 20% of the grant, Tinney said.

The money will allow staff to have the rooms ready in a few months.

“We’re also hoping to add another interviewer who also works as a family advocate by next October,” he said.

Rubio has been with Hope since 2013, shortly after the nonprofit reopened under the direction of Tinney. She, along with the other eight staff members, has felt the workload increase.

“My numbers have increased,” Rubio said. “But I welcome the bigger numbers because I feel that we are getting out there and educating more.”

When a report of child abuse or neglect is made to law enforcement or the Texas Department of Family and Protective Services, child advocacy centers, or CACs, across Texas are called for forensic interviews that can be used in investigations and as evidence in court.

CACs’ relationship with the agencies is ingrained. In fact, a new Texas law will require agency representatives to serve on their boards. Hope already fulfills this requirement.

Staff at advocacy centers often come from agency backgrounds, such as Jenny Wright, the director of intake, who worked with the Victoria County Sheriff’s Office and Victoria Police Department for two decades before joining Hope, or Megan Burow, a family advocate and backup forensic interviewer, who found her way to Hope from the Texas Department of Family and Protective Services.

Rubio, who was raised in Goliad, spent 19 years at the Texas Department of Criminal Justice as a sociologist before she took a job at Hope.

At first, she said, she thought drugs or alcohol brought the thousands of inmates she interviewed to prison, but over time, she realized abuse turned them to the substances and eventually to crime.

“So many would say that they didn’t get any therapy, that they have never told anybody,” she said. “They had never talked to anybody, so it was real important to me, and it goes back to the community, which is how I ended up here.”

The goal for centers is to reduce the trauma the child has already gone through, which includes avoiding asking them to repeatedly recall incidents, she said.

“The interview process is called self-narrative because it builds rapport,” she said. “There are not specific questions. You want to open up the doors for them to tell their story.”

After the initial interviews, children are offered free therapy. Cathy Newbern, a family advocate at Hope, said watching the kids go through that process of healing is what makes the job worthwhile.

“Through those services, you’re able to see the children, how like a lot of times they are carrying the weight of what has happened to them, but when they’re able to talk about their feelings and share that with someone,” she said. “It it is very emotional. You see the difficulty of when they come in and when they leave, just the change in their demeanor and that they’re able to talk to their families.”

There are 71 advocacy centers in the state, which saw 58,432 kids during 2018 – a 22% increase since 2017, according to Children’s Advocacy Centers of Texas Inc. The Harbor Children’s Alliance and Victim Center in Port Lavaca, which serves Calhoun County, was also among centers that saw an increase in forensic interviews, said Maria Walton, the CAC’s executive director.

The increase creates a heavier workload for staff but is welcomed because it reflects more kids finding the courage to talk about their abuse. Still, there are so many who have not told their story, Tinney said.

“We know from reports and statewide intakes that there were about 116,000 reports of abuse, so we only got to see half,” Tinney said. “Part of that is capacity; we just don’t have enough staff to get everybody in, nor does law enforcement or CPS (or Department of Family and Protective Services).”

That figure is scary on its own, but even more so, the state has about 7.4 million children, and if 1 in 10 are sexually abused, statistically, so many – about 84% – still bear the secret, he said.

“The reason that is so scary is that those nine that don’t tell have a much higher propensity for drug and alcohol abuse, ending up in juvenile detention, prison, unwanted teen pregnancy – all of those things,” Tinney said.

Making an outcry is difficult for obvious reasons, Rubio said.

“Sometimes this is what we call a secret that they have been carrying for a very long time, and sometimes they’re carrying shame that doesn’t belong to them, and they don’t understand it,” she said. “A lot of times they think that they’ve done wrong.”

In addition to more education and outreach, Tinney said child sexual abuse is a conversation topic that people need to find the courage to approach. A few years ago, he said, he asked his granddaughter the most difficult question he has ever asked anyone.

“I said, ‘PawPaw needs to know, has anybody ever touched you or ever done anything to make you uncomfortable?’” he said. “That is one of the most difficult questions for one reason – I only want one answer. I want her to say no, which is the answer she gave me.”

Asking that question and providing children with reassurance that they have someone they can go to if they have been or ever are abused can prevent kids from living with those experiences by themselves, Tinney said.

“Those are the kinds of conversations that we don’t have,” he said. “To A) have the guts to ask them the question regardless of what the answer is, but then B) if they say no, to say, ‘If it does happen, I am OK; you are safe with me, and we’re going to work on this together (because) you’re not alone.

“Until we can talk about it openly in the community, we’re going to continue to struggle.”

If you think your child or a child you know has been abused, call the Texas Department of Family and Protective Services' Texas child abuse hotline at 1-800-252-5400. If the situation is an emergency or life-threatening, call 911.

The mission of Hope Child Advocacy Center is to restore the lives of abused children through partnership with communities and agencies investigating and prosecuting child abuse. For more information about how to donate, volunteer or get involved with the nonprofit, contact the center at 361-573-HOPE.

The former executive director of Hope Child Advocacy Center was arrested last week at his home in Goliad by federal authorities.