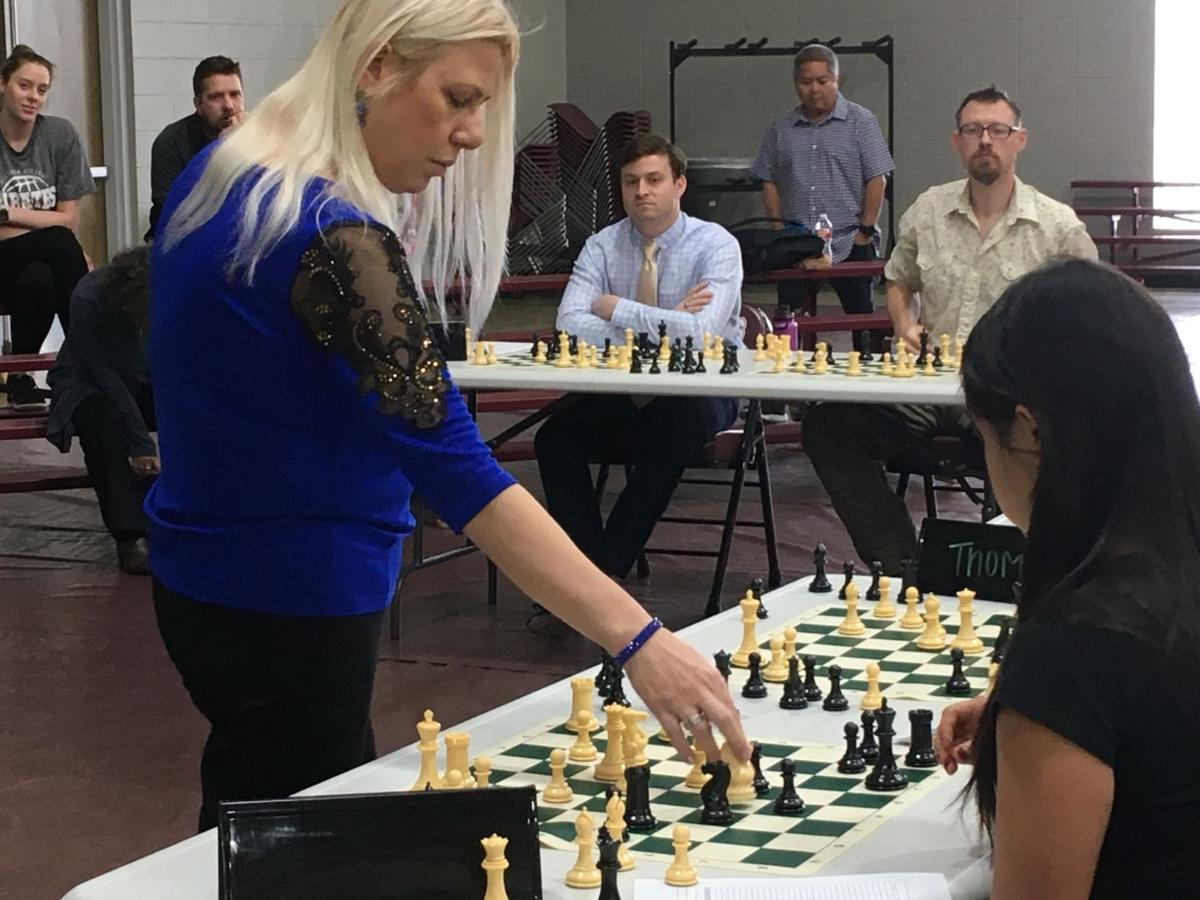 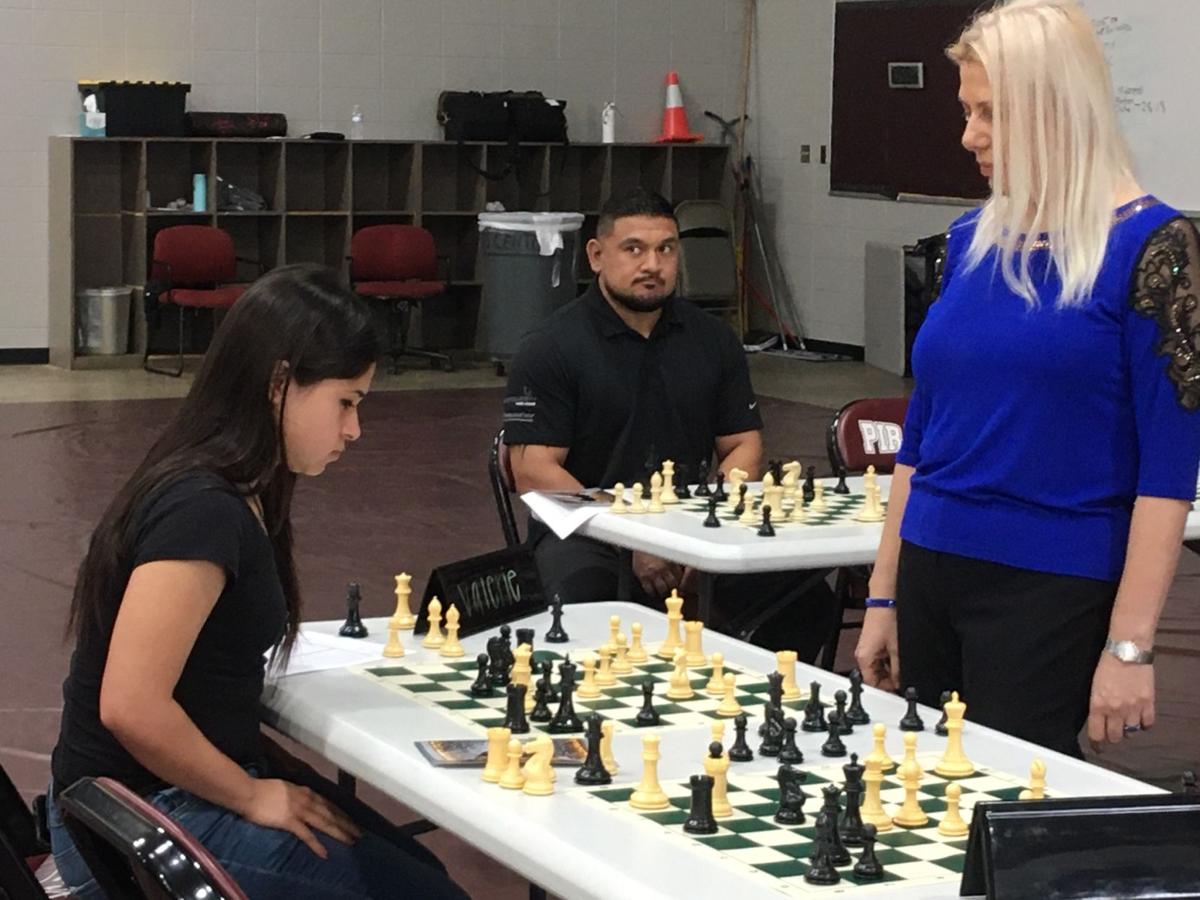 Susan Polgar took on 10 opponents Monday in games of chess – at the same time.

The Missouri resident, who is the first female to earn the Men’s Grandmaster title, wasn’t showing off, but instead wanted to inspire Crossroads residents by telling her life story at Victoria College’s Lyceum Lecture Series.

“I wanted to see what a real walking and talking brain looked like. It’s not easy to play chess,” said Emily Yeary, who attended the presentation. “I read that her father started playing chess with her when she was young which speaks to the brain – what you can do with the brain.”

“I could see her moves coming, but I couldn’t stop them and she played me well,” Chairez said.

Polgar won all of the games played to completion. One faculty member had to withdraw early to teach a class.

Polgar lived half her life in Hungary before she moved to New York City.

“I come from a very poor family in a Communist country, and I had a passion. I had a dream. I had to go through a lot of discrimination, and I had a lot of hurdles to overcome, and if I can do it anybody can do it,” Polar said.

Polgar started playing chess at the age of 4 with her father. When she began playing against others at the park, the spa and smoke-filled rooms, they were stunned to see a young girl not only playing but also winning.

“I’ll be honest, the guys did not like it,” she said “We are talking about the mid-1970s, and in those days, it was unheard of, unthinkable for most guys. The good news is I got them used to it, after winning once, twice, a hundred times, it was not such a shock to them. It’s not the same ambiance today. It has been accepted. It is OK to lose to a woman in chess.”

For the girl who could barely reach across the chessboard, the game of chess became an equalizer with adults much older and greater in size than she.

“I was fortunate probably because my father was an educator. He was a psychologist and had special talent to introduce me to the game in a special, magical way by not focusing so much on winning and losing but by focusing on the beauty of the game ... every day I wanted to have more of that feeling of exploring the beauty of chess,” Polgar said. “In my mind, there were so many amazing situations. When one side has all the pieces and the other only has a few left, and yet it’s an example of David versus Goliath, and a few pieces can still win.”

When she entered a chess competition at age 4 at the Budapest Elementary School, her life changed forever. Not yet in school, she received special permission to play, and she won all 10 of her games against girls who were more than twice her age.

Her initial success made her realize that moving forward would take a lot of practice.

“I discovered early my passion, which was chess, and I realized that in order to have success, you have to make sacrifices and you have to work hard, and you have to persevere and not give up when tough moments come. Because I have news for you – it doesn’t matter how passionate you are or how talented you may or may not be, there will be tough moments. There will be losses. There will be disappointments. It’s unavoidable. What makes the difference is not giving up in those moments, not feeling sorry for yourself … in fact, use that as a motivation to work harder and come back and show your opponents and the world you can do it.”

Polgar’s biggest challenge was facing the constant skepticism of society, chess clubs, sports authorities and even her own family. They did not believe females had the potential to become Chessmasters or Chess Grandmasters.

“I used to hear the craziest reasons – a woman’s brain size is smaller and women cannot keep quiet long enough to finish a chess game. It’s physically not possible,” she said. “Luckily, I didn’t believe that.”

Polgár won the Women’s World Chess Championship four straight years and became the world’s top-ranked female player in 1991 at the age of 15. She has won 12 medals – five gold, four silver and three bronze – at the Woman’s Chess Olympiad, according to a news release.

After winning her last world championship, Polgar shifted her focus to promoting the sport, especially among young women, through the Susan Polgar Foundation and the Susan Polgar Institute for Chess Excellence at Webster University.

“I wanted to do more than just keep winning chess titles,” she said. “I wanted to change lives, inspire others and change the sport for the better.”