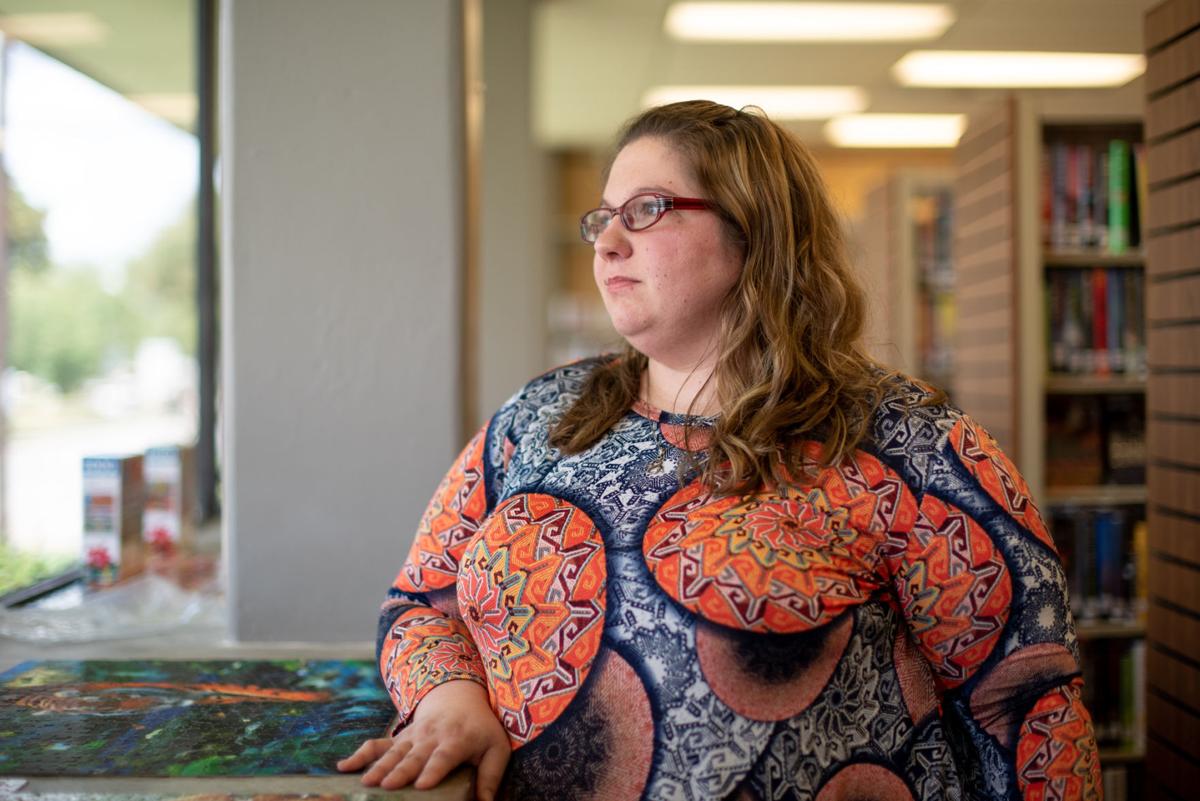 Flora Moore Henneke, 29, spends time in the Friench Simpson Memorial Library in Hallettsville. Flora’s daughter was stillborn in 2011 and hopes by contributing her story to the book “Footsteps on The Heart: A Remembrance Anthology,” she can help other parents feel as if they aren’t alone in their loss. 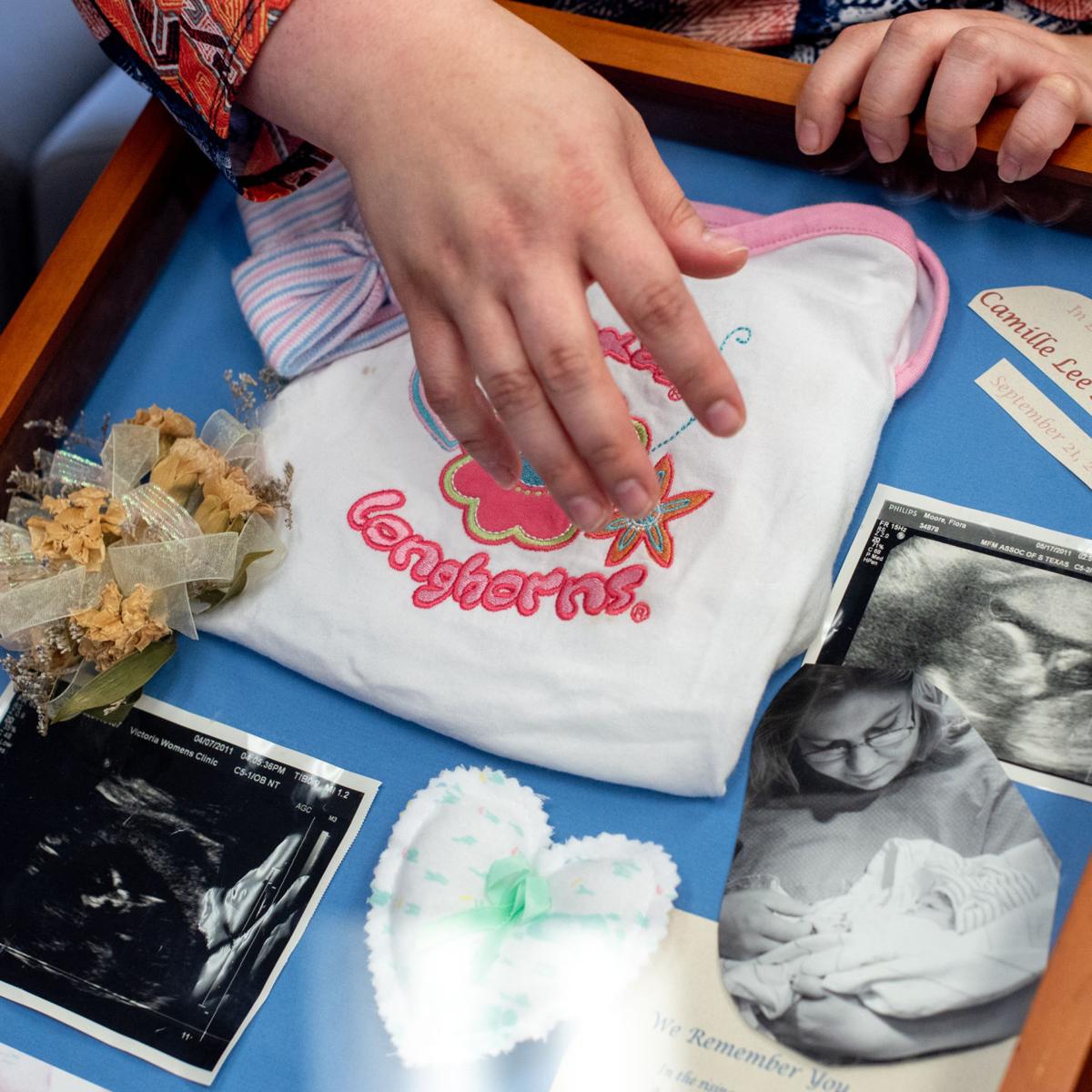 Flora Moore Henneke, 29, of Hallettsville, displays a shadow box filled with items that help her preserve the memory of her daughter, Camille, who was stillborn. 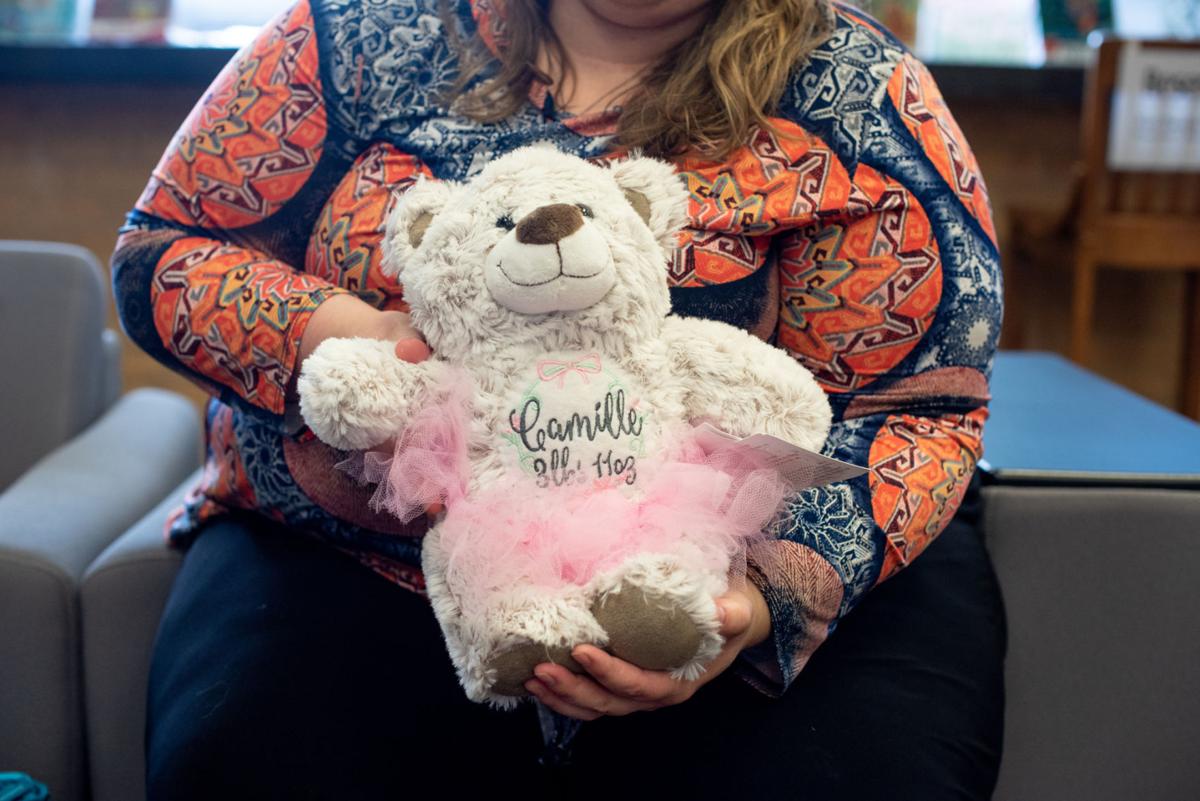 Flora Moore Henneke, 29, of Hallettsville, displays a Molly Bear that weighs as much as her daughter Camille did. Despite losing her daughter, Flora says she is confident that Camille is in a better place where she is healthy and safe.

Flora Moore Henneke lost the daughter that she had carried for almost nine months.

Even though that day was almost seven years ago, she remembers going to Texas Children’s Hospital in Houston for an appointment, expecting to make plans to treat her daughter’s heart condition.

Henneke was lying in the ultrasound room with her cousin by her side when she heard that a heartbeat couldn’t be found.

She was 21 years old at the time, and it didn’t sink in that the child she nicknamed her “kung fu baby” for always kicking, was gone.

They drove back to Victoria and early the next morning checked into the hospital.

In the hours that followed the delivery, she took photos and held her baby for the first and last time.

She buried Camille Lee in Edna.

Although she felt alone, she wasn’t.

Each year in the U.S. there are about 24,000 stillbirths, defined by the Centers for Disease Control and Prevention as the loss of a baby after 20 weeks of pregnancy.

The causes of many stillbirths are unknown.

They met through an online support group and connected as grieving mothers.

Joseph, who was working on a book to remember her daughter, asked Henneke whether she would also share her experience for the book.

The book is called “Footprints on the Heart: A Remembrance Anthology” and was published this summer on Kindle and paperback.

Henneke still lives between what was, what is and what could have been.

“Writing, for me, has been a release,” she said. “All I can do is keep her legacy alive one way or another.”

The 29-year-old recently moved to Hallettsville where she lives with her husband, Matthew Henneke Jr., and her two stepchildren.

Her husband is an assistant manager at O’Reilly Auto Parts and she works as a caregiver for a home health company.

But the years after Camille died were painful.

Henneke said she was very angry for a long time and turned from her faith. She would go to different pastors and question them.

After a house fire, she was only able to save the baby’s blanket and a few trinkets.

“You don’t know what somebody is going through,” she said, remembering she used to take the baby’s blanket with her to the grocery store and could feel stares from people.

At one time she contemplated suicide so she could be with her daughter, but then realized her own mother would have to deal with both losses.

Finally she was able to see a counselor through STCH Ministries. She believes her daughter is healthy and pain-free in heaven.

“The worst thing that people can say is the pain will go away, but it never does,” she said. “I just have to live without her.”

She also found out there were several family members who had experienced similar losses.

“I’m hoping with this book I can bring awareness and people know that it’s OK to talk about it,” she said.

She wonders whether Camille would have liked the same things as her 13-year-old stepdaughter or her 10-year-old stepson?

She remembers one day thinking about whether she was considered a mom or not. She went back and forth.

That day she found Legos in her coffee cup.

"Footprints on the Heart: A Remembrance Anthology" is a collection of poetry and prose by bereaved parents from different parts of the world who have been profoundly moved by the love and loss of their babies, which has inspired their moving and heartfelt words.

Paperback can be purchased on Amazon.com for $9.99.

Kindle digital version is available on Amazon.com for 99 cents.

Proceeds will be used to place the books in hands of bereaved parents.

There are local resources for parents who have endured the loss of a child.

Angel Babies Victoria is a free grief support group open to those who have experienced miscarriage, stillbirth or early infant loss. The group meets the first Monday of every month from 6 to 7 p.m. at Hospice of South Texas, 605 E. Locust in Victoria and is on Facebook.

BirthWaves is a nonprofit that provides bereavement trained doulas to families during and after pregnancy or infant loss. Doulas are available 24/7 and families pay nothing for the services because of donations to the organization. Call 1-800-518-1758.

When Amanda Rodriguez’s son should have been celebrating his first birthday, his family gathered at the Port Lavaca cemetery with balloons. Th…