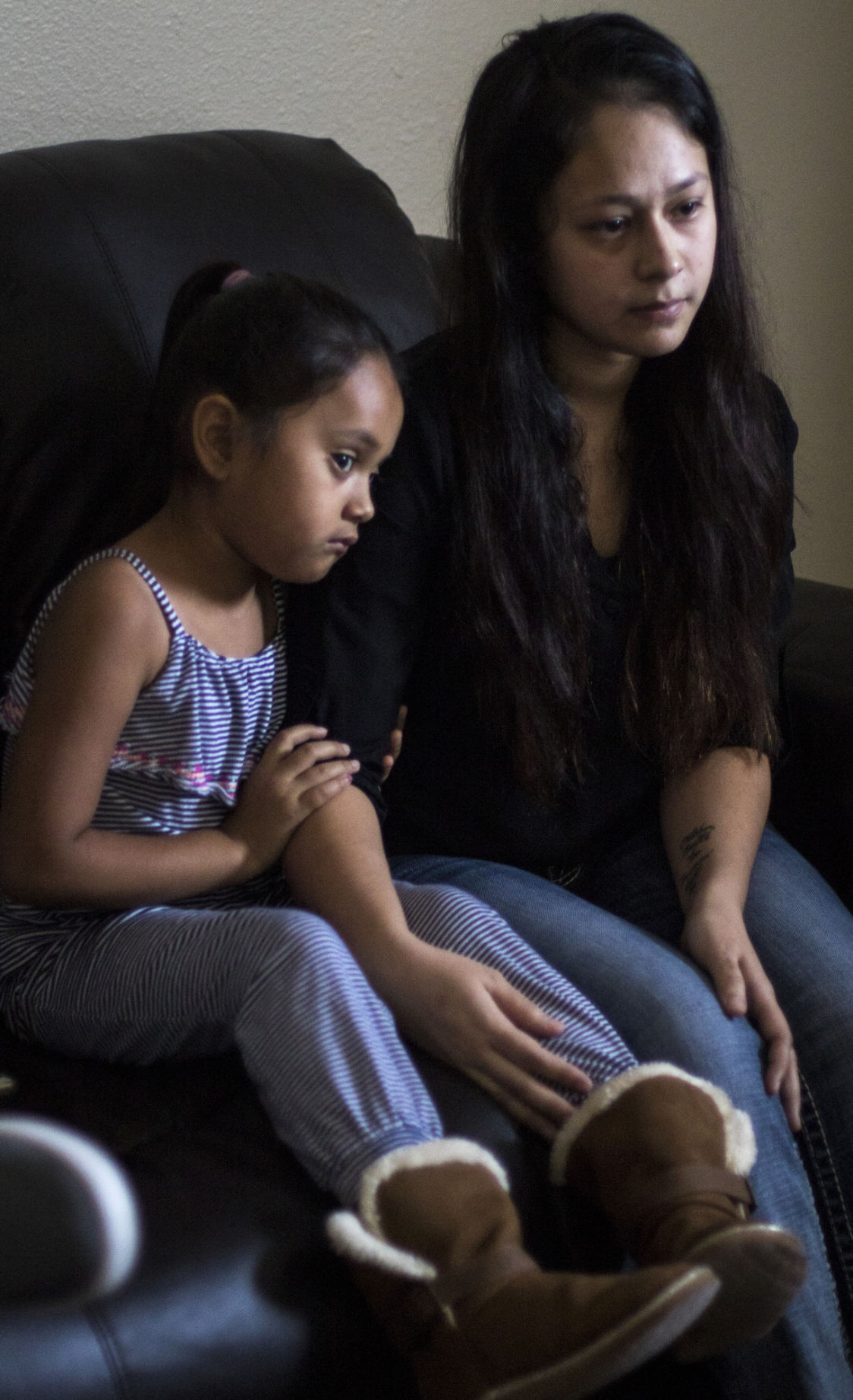 Alyssa Garcia and her daughter, Bethany Sanchez, 6, talk about husband and father Leroy Sanchez in their home. Sanchez was shot to death in October 2015. 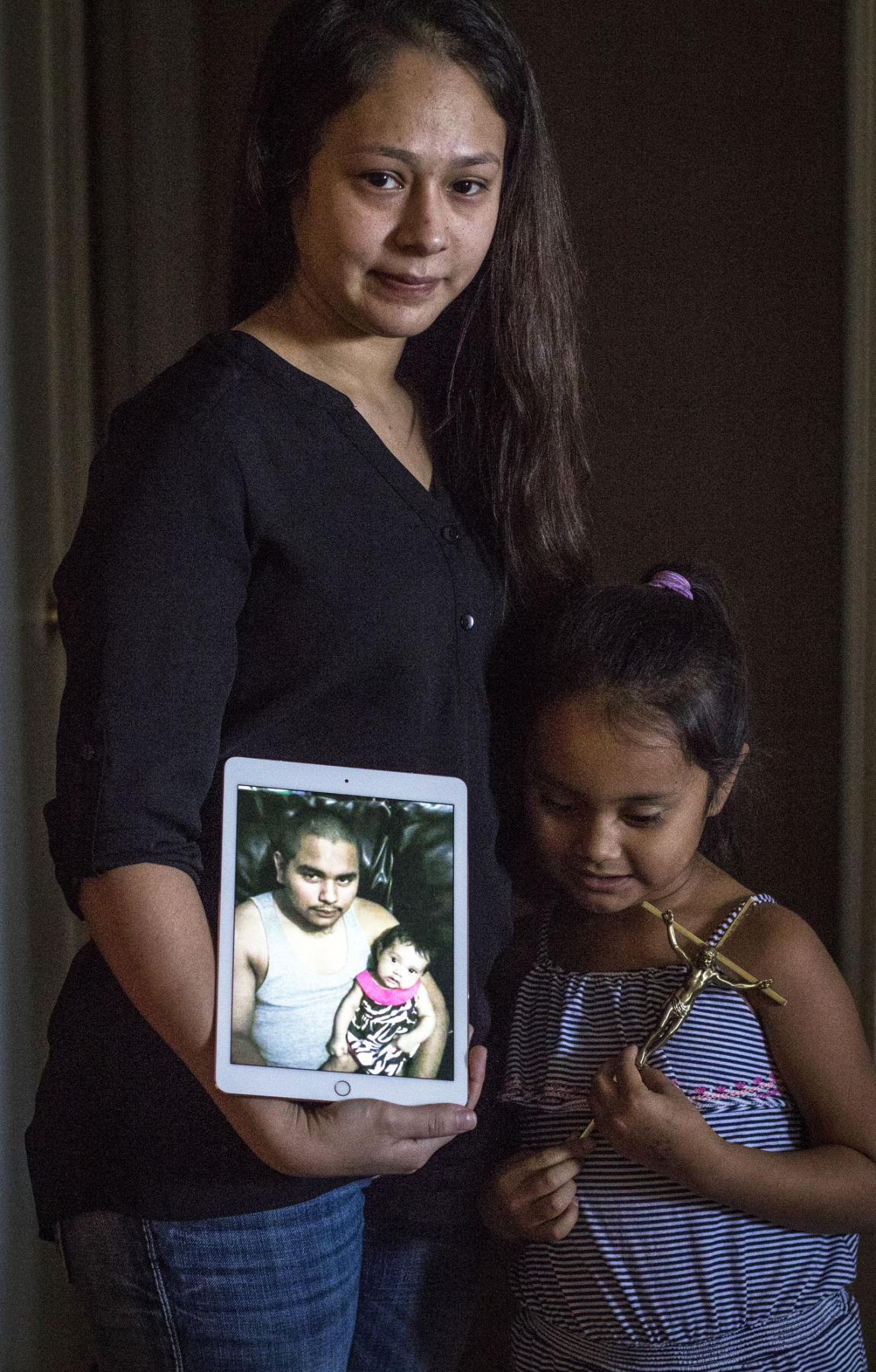 Alyssa Garcia holds a photo of her husband, Leroy Sanchez, who was shot to death. Her daughter, Bethany Sanchez, 6, holds a cross she uses to speak to her father. 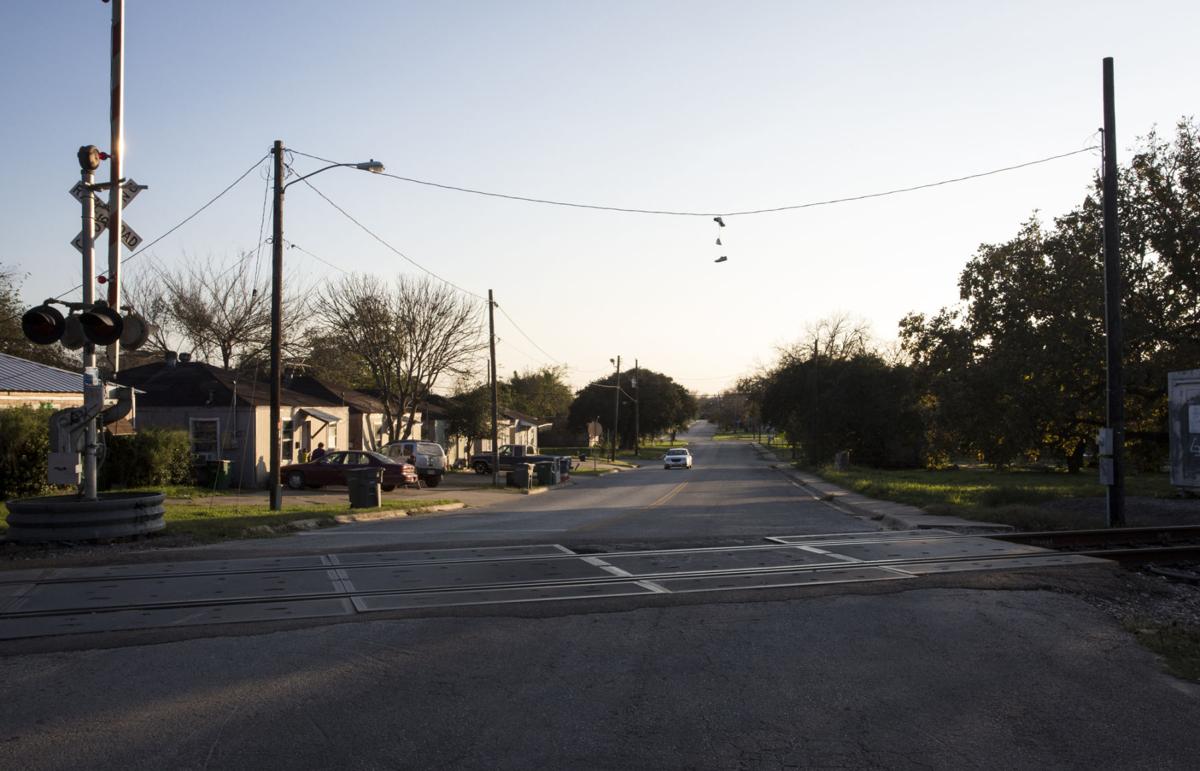 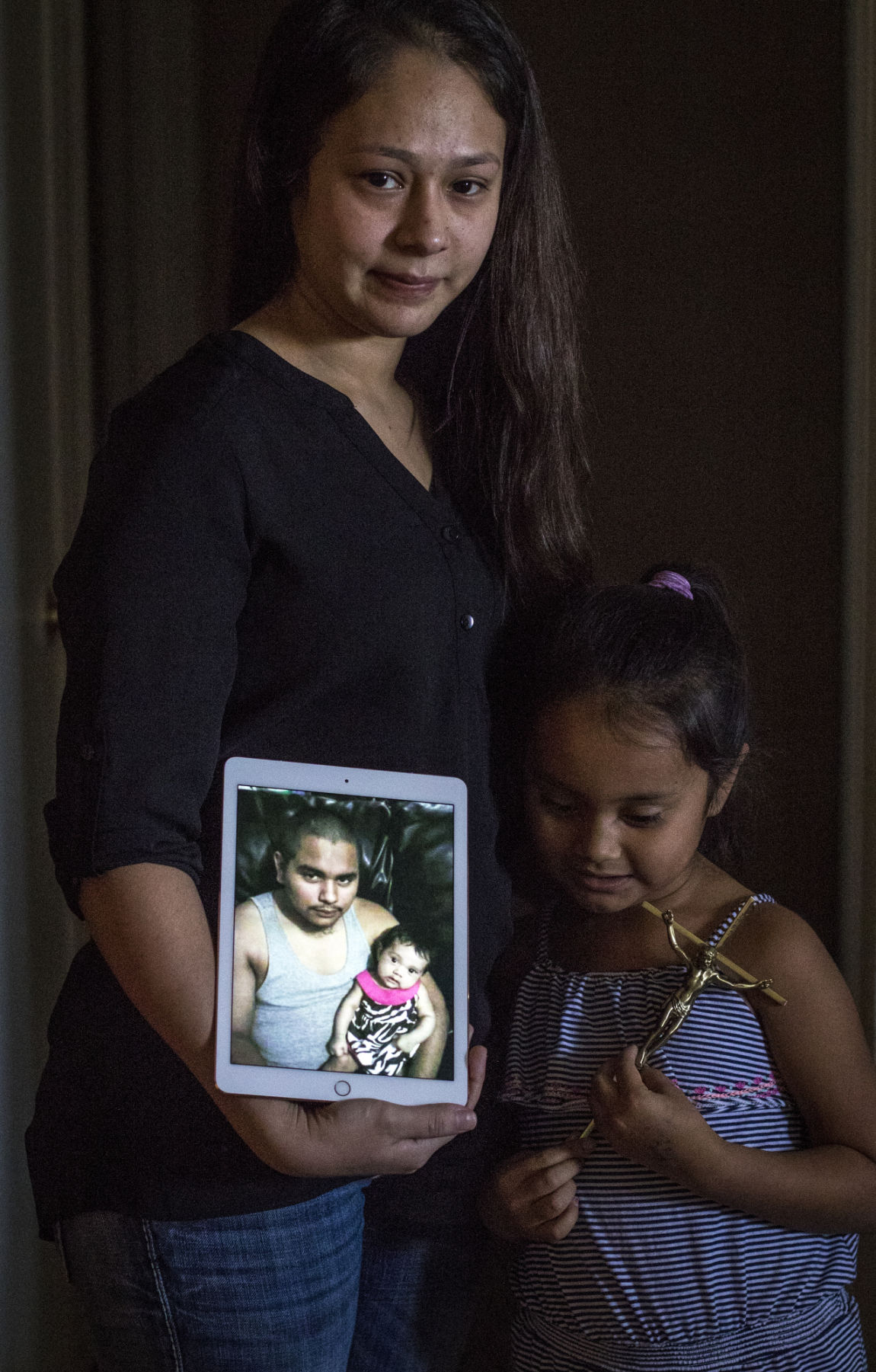 Alyssa Garcia holds a photo of her murdered husband, Leroy Sanchez, and her daughter, Bethany Sanchez, 6, holds a cross she uses to speak with her dead father. Sanchez was murdered in October 2015.

Alyssa Garcia and her daughter, Bethany Sanchez, 6, talk about husband and father Leroy Sanchez in their home. Sanchez was shot to death in October 2015.

Alyssa Garcia holds a photo of her husband, Leroy Sanchez, who was shot to death. Her daughter, Bethany Sanchez, 6, holds a cross she uses to speak to her father.

Alyssa Garcia holds a photo of her murdered husband, Leroy Sanchez, and her daughter, Bethany Sanchez, 6, holds a cross she uses to speak with her dead father. Sanchez was murdered in October 2015.

A 6-year-old Victoria girl uses a gold cross she got from Our Lady of Sorrows to pray to her dead father.

Bethany Sanchez asked her mom to show her how to pray after her father was killed in 2015.

She shares many traits with her "Tata," Leroy Sanchez. She loves to eat snow crab, oysters, shrimp and crawfish. She pronounces dentist as "dientest." She has big, round, brown eyes and a dark complexion.

"It doesn't make it easier that she looks just like him," the girl's mother, Alyssa Garcia, said tearfully.

Sanchez spent much of the day of his death at Saxet Lake with friends.

Ryan Martinez dropped Sanchez off at a home in the 900 block of South Navarro Street shortly before sunset at 7:10 p.m.

Martinez then went to Bible study at the Covenant Life Center and woke up the next morning to a Facebook message about his best friend being fatally shot.

"I thought it was a nightmare. I remember I just booked it over there," he said about DeTar Hospital Navarro, where Sanchez was declared dead. "I just collapsed."

Garcia may have learned about the shooting moments after it happened.

She said shortly before the shooting, Sanchez called her and warned her not to drive their shared 2013 white Toyota Camry around town. He told her that a gang called the Southside Locos was following the car.

A few minutes later, she received another eerie phone call from him. This time, he didn't answer.

"I was like, 'Hello? Hello?' I just heard yelling. I heard him yell one name so clearly, and after that, it was a bunch of other names, and the phone either fell or, I don't know, it just clicked off," Garcia said.

Garcia tried calling him back, but he didn't answer. Sanchez's twin, James Sanchez, then called her to tell her about the shooting.

District Attorney Stephen Tyler said Victoria police detectives Jason Stover and Melissa Rendon looked into the name Garcia heard Sanchez yell on the phone, but nothing has developed from that lead so far.

Garcia said she's also shared with the detectives inflammatory posts she found on Facebook about Sanchez and his death, but they told her they needed more proof.

The Victoria Police Department empathizes with Sanchez's family, but some family members also have hindered the investigation by contacting potential witnesses themselves, Lt. Eline Moya said.

Moya said the investigations unit is comprised of detectives assigned to solve both crimes against people and property, and they pool their resources on big cases.

"What's good about that is that you have a wealth of knowledge," Moya said. "The chief is confident in our investigation team. ... He knows in some cases, one of them being Leroy Sanchez's, that there's been some difficulties."

Although both Garcia and Martinez said Sanchez was not a gang member, the district attorney said he thinks the shooting happened because of a disagreement between two gangs, the Northside Klan and the Southside Locos.

In 2015, Sanchez, his twin, James Sanchez, and Joe David Cuellar were all charged with engaging in organized crime and two counts of aggravated assault with a deadly weapon.

They were charged with being members of the Northside Klan and threatening to shoot two people.

Sanchez's case was dismissed after his death. His brother's case is ongoing. In November, Cuellar went to trial, and a jury voted 11-1 for guilt. Because they were not unanimous, a judge declared a mistrial, and Cuellar may be tried again.

Despite his criminal history, Sanchez's family and friends describe him as funny and hardworking.

Garcia met Sanchez during a world geography class in 2008. She moved into his family home on Levi Street when she was 16 and got pregnant with his child when she was 17.

"He just made us laugh all the time. He liked to act all of his stories," she said.

Although Sanchez dropped out of high school to support his family, Martinez said he encouraged others to continue their education.

"He told me all the time since I graduated, 'How come you don't go to college?' He told me he would have," Martinez said.

Sanchez was working as a heavy equipment operator or pipe layer Monday through Saturday. Sometimes, he worked 18-hour days.

When he was off, Sanchez liked to take his daughter fishing. He was also meticulous about his appearance.

"He liked to buy his shoes and Jordan shirts and the matching shorts and caps and everything," Garcia said.

On his birthday or on Christmas, his mother bought him gold rings or a necklace.

Garcia and Sanchez were separated at the time of his death. She said the separation was partly because of his heavy drinking. But they had reconciled, and she was going to move back in with him on Levi Street.

"If I were to kill somebody, I don't think I could live with myself. But I guess there's just heartless people out there. It hurts that my daughter has to be without her dad," she said.

Martinez said if police were to find the person responsible for Sanchez's death, his Christian faith would compel him to forgive that person.

"That's what God wants us to do, is to forgive, but justice still needs to be served," he said.

To read story about another unsolved murder, click here.

Even though she didn't know her father, he was out there somewhere.