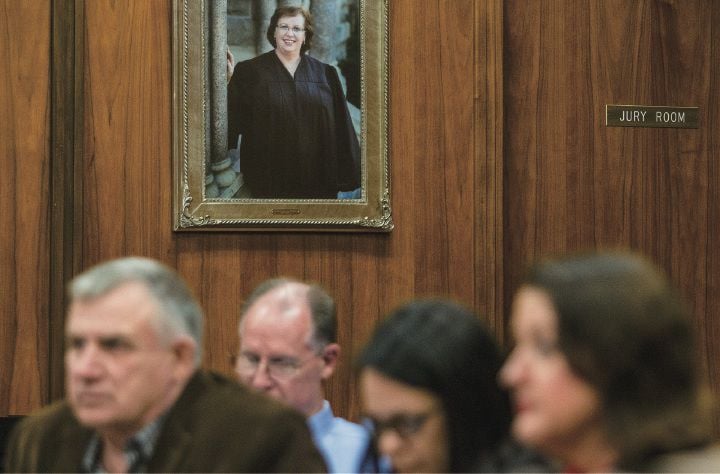 The portrait of former Victoria County Court-at-Law 1 Judge Laura A. Weiser, hangs on the wall inside the DWI special court meeting room. 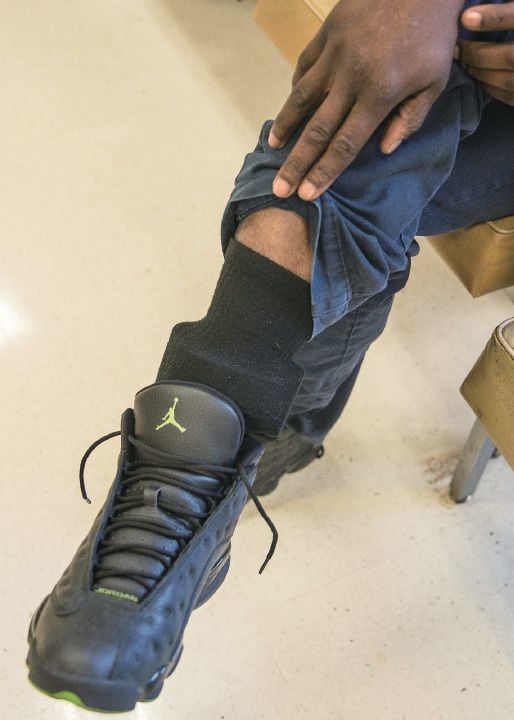 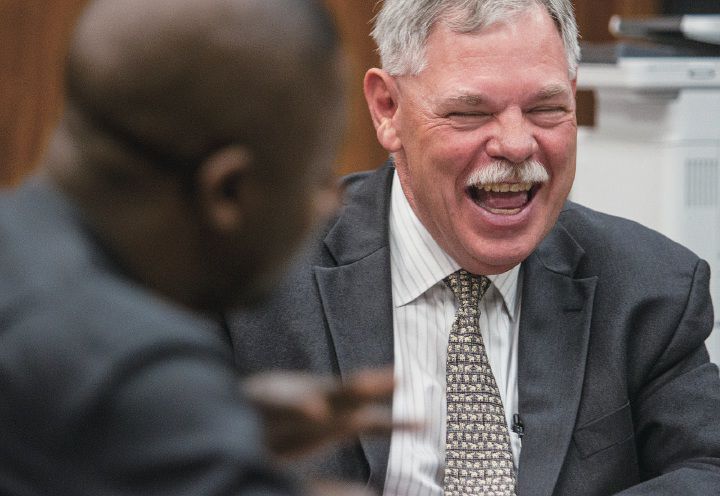 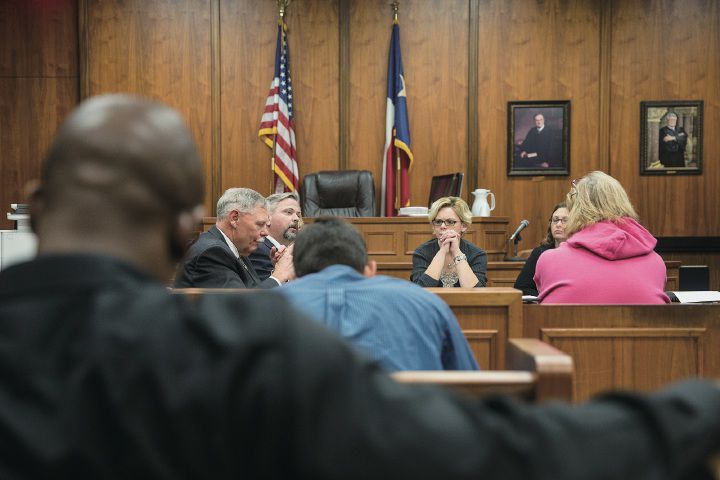 Micki Hauschild, 67, right, makes her appearance at the DWI special court inside the Victoria County Courhouse. 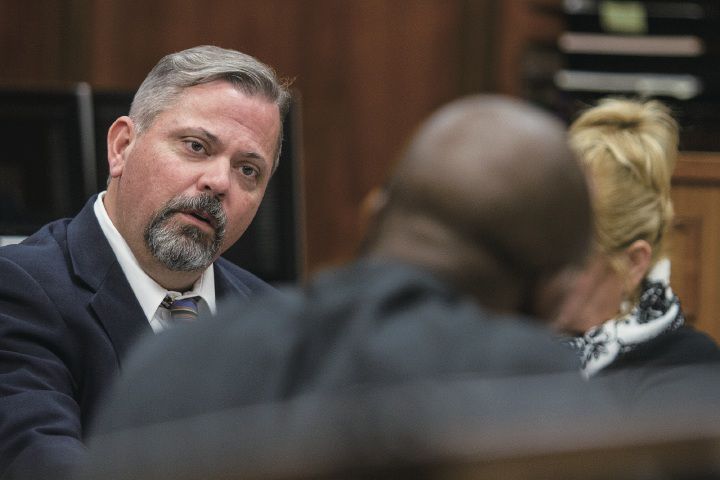 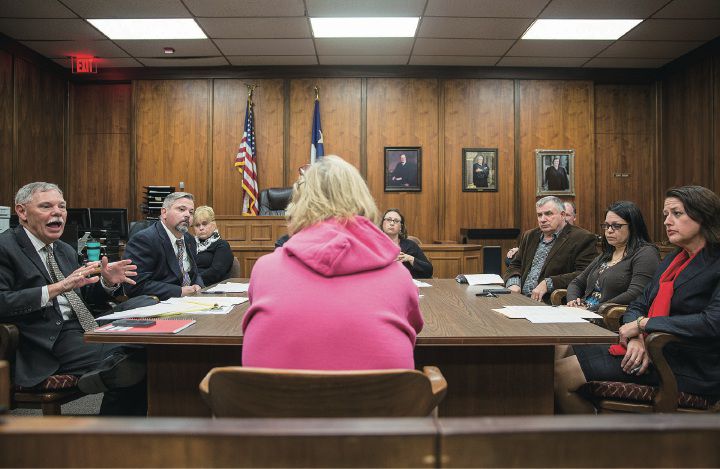 The portrait of former Victoria County Court-at-Law 1 Judge Laura A. Weiser, hangs on the wall inside the DWI special court meeting room.

Micki Hauschild, 67, right, makes her appearance at the DWI special court inside the Victoria County Courhouse.

Victoria resident Joseph Garrett enrolled in the Victoria County DWI court because he wants to be alive when his son graduates from high school.

"I thank God for the program," said Garrett, 38, a self-described functional alcoholic who is now more than six months sober.

Thursday, Garrett and four other participants appeared in an upstairs courtroom at the Victoria County Courthouse to report their progress in their personal battles to stay sober. Like numerous other such special DWI courts in Texas, this program offers personalized support and supervision for those struggling to control their drinking.

"The main value of the specialty court is the combining of very strict accountability with treating the underlying causes of the offenses," said former Victoria County Court-at-Law 1 Judge Laura Weiser, who began the program about ten years ago.

After missing a probation appointment for his second DWI, Garrett started drinking with abandon.

"In my mind, I had already given up on myself," he said.

Then, he showed up to the Victoria County Probation Department drunk but was given a chance to enroll in the program and avoid jail time, Garrett said.

"I reached the point where I realized I needed to get some help," he said.

"An addict or alcoholic sometimes will do anything for that next hit or drink. Traditional courts didn't necessarily deal with that real well," said Gilliam, who presides over the program with County Court-at-Law 1 Judge Travis Ernst.

But that doesn't mean participants get a break, Gilliam said. In fact, the four-step program, which takes a minimum of about nine months to a year to complete, is in many ways more demanding than traditional options, the judge said.

New participants must make bimonthly appearances before both county court-at-law judges and their panel of probation officers, counselors and attorneys.

They must stay completely alcohol- and drug-free for the duration of the program.

And they are required to use a variety of alcohol detection equipment, such as ignition interlock devices and anklets, among dozens of other demands set by the court.

According to probation department records, about 80 percent of participants have graduated, and about 90 people have enrolled.

If participants fail to meet any of those requirements, judges can hand down sanctions, such as jail time. Furthermore, participants must complete their probation terms after graduation.

"When our folks have relapses, we may put them in jail for, say, a weekend, but we (continue to) hold them accountable," Gilliam said.

That accountability was apparent Thursday when Garrett reported he had not yet signed up for a series of mandatory classes with Billy T. Cattan Recovery Outreach.

"I'm going to tell you the rules right now," said Ernst, meeting Garrett's eye in the courtroom. "You're going to call Billy T. Cattan. You're going to schedule all seven of those appointments ... , and if you miss them, there will be jail time."

Friday, Garrett said he had scheduled the appointments.

"I need to be held accountable," he said.

Research has shown face-to-face interaction between judges and participants has a major effect in promoting accountability, Weiser said.

"The research shows that just putting someone in jail keeps them from drinking in jail, but it doesn't really change their behavior pattern," she said.

Weiser said she started the county's DWI program after speaking with a judicial resource liaison for the Texas Center for the Judiciary, a nonprofit that provides education for judges in the state. In 2013, she resigned from Court-at-Law 1 to take that job herself and handed the reins of her then-five-year-old program to Ernst.

These days, Weiser is dedicated to teaching judges about the effectiveness of DWI programs and how to develop them.

She said the evidence is clear: DWI courts are powerful and efficient tools in keeping the public safe from drunken driving.

In 2013, the National Transportation Safety Board endorsed the creation of DWI courts as a proven strategy for repeat DWI offenders. According to the National Center for DWI Courts, DWI courts reduced repeated DWI offenses by 12 percent, and the best of such courts did so at 50 to 60 percent.

And state and local officials are taking notice, she said.

According to his office's website, Gov. Greg Abbott supports the creation of DWI courts and has provided grants for funding in local jurisdictions.

Victoria County's program is funded at no cost to taxpayers through fees billed to those convicted of DWIs, Gilliam said.

Despite the successes and benefits championed by Gilliam, Ernst and Weiser, District Attorney Stephen Tyler said he has doubts about the program's effectiveness, arguing he has yet to see data suggesting the program prevents repeat offenses in Victoria County. Instead, he claimed a policy instituted by him from 2014 to 2016 that disallowed plea agreements and required trials for all misdemeanor DWI offender has.

Gilliam said prosecutors who once participated as advisers to the court stopped attending when that policy began.

Tyler also had concerns about the severity of punishments and sanctions handed down by the court.

"No one stops drinking or breaking the law because they fear meeting a judge for Coke and cake to celebrate sobriety," he said.

Johnson, who currently serves on the court as a defense attorney adviser, played a key role in founding the court, Weiser said.

"Prison is not necessarily the place for (second-time DWI offenders) just yet, but if they can't get it together, it will be," Johnson said. "We are trying to prevent (them) from killing themselves or killing someone else."

Since Tyler's changes, second-time offenders are no longer automatically screened by the probation department, which prevents many who could benefit from the program from getting the help they need, Johnson said.

"It's a risky situation," she said.

Johnson said she and other Texas Republicans, such as members of the Right on Crime movement, are waking up to the effectiveness of special courts.

"It's a wide gamut of people locally, and that says to me loud and clear that the community recognizes that it's time for a change," she said.

• More than two million drivers in the U.S. have three or more DWI convictions.