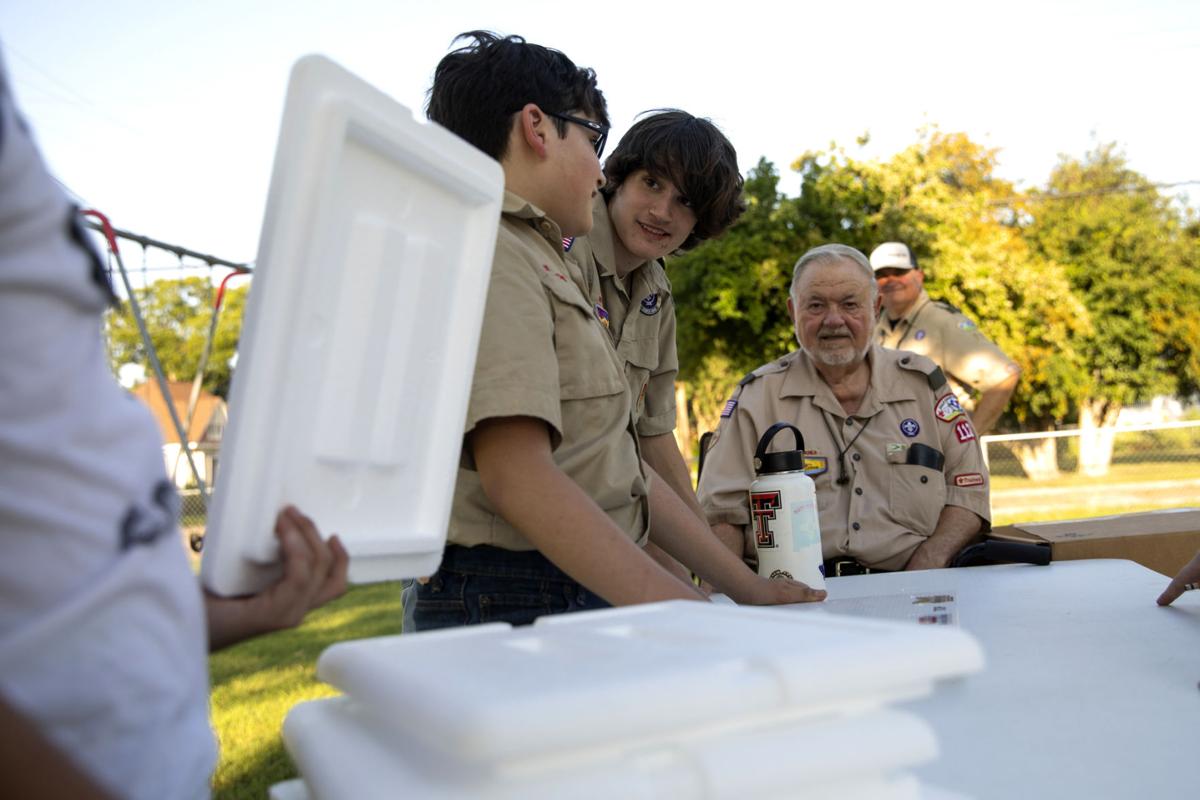 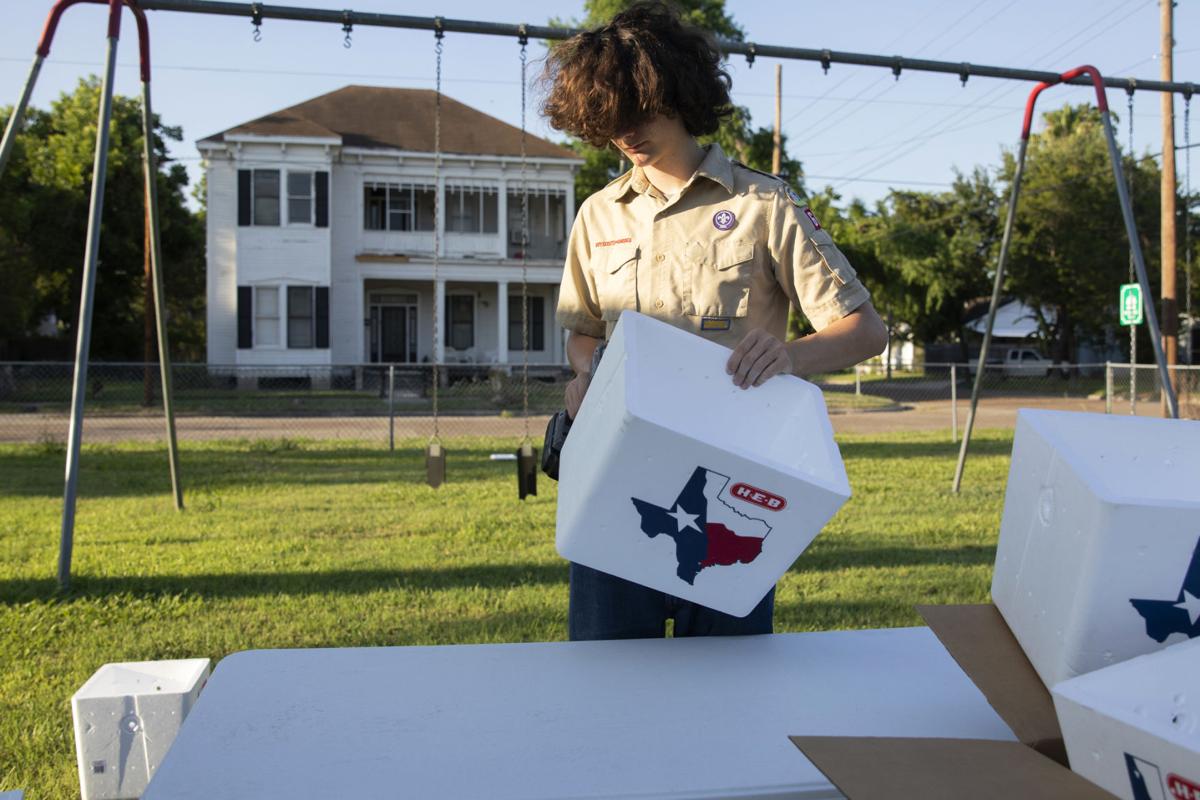 Jack Thompson, 15, drills holes into the bottom of a Styrofoam cooler for sea turtle egg incubators. 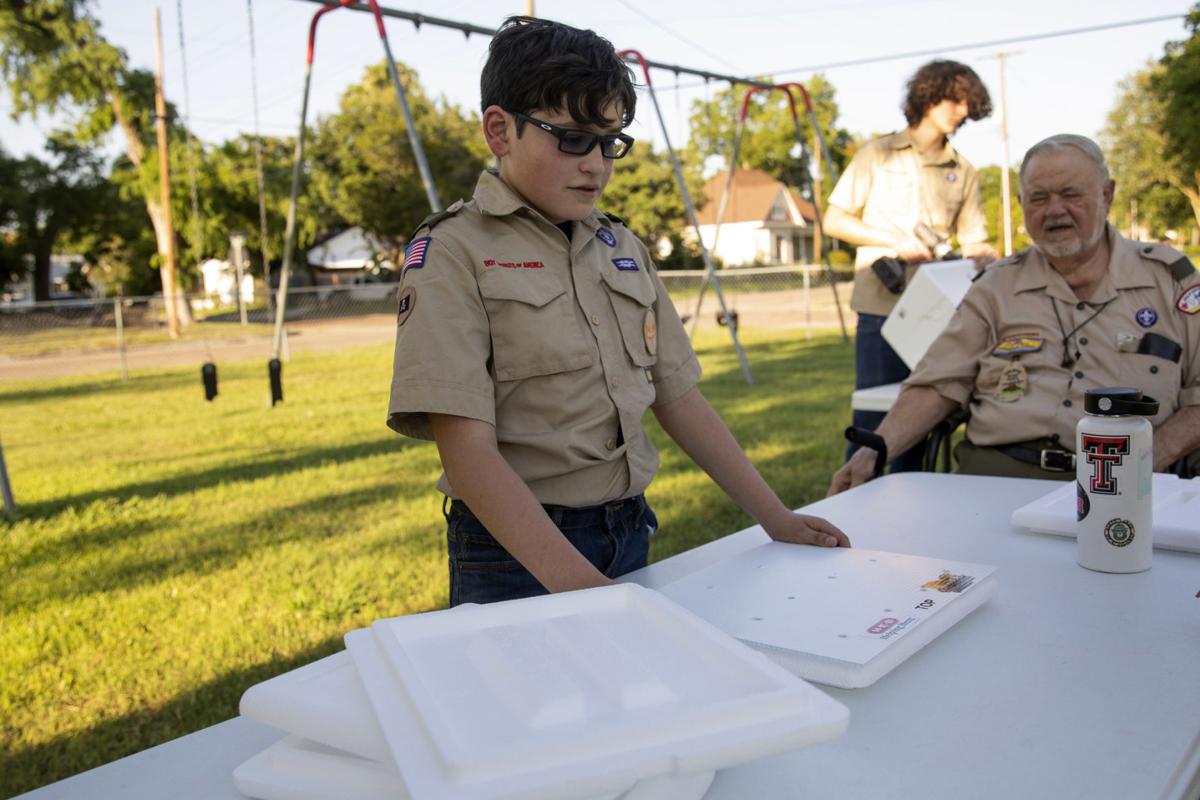 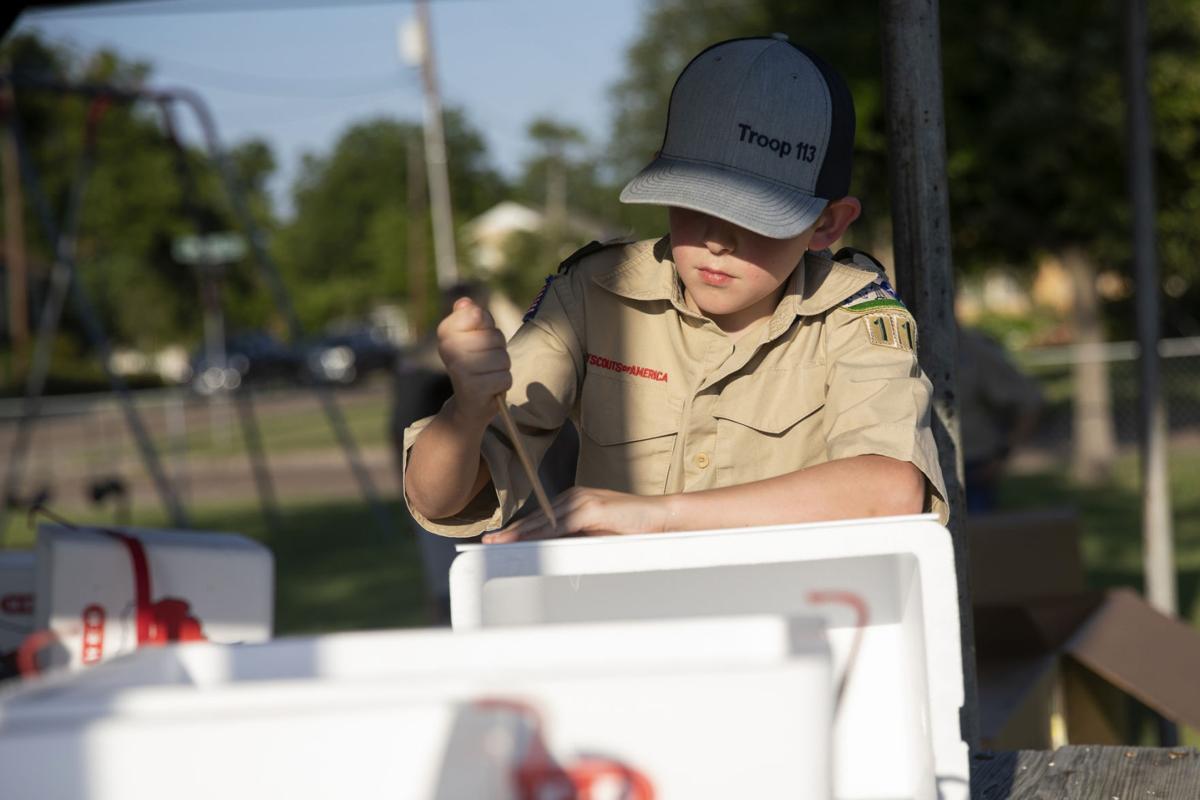 Elijah Montgomery, 12, pokes holes into the top of a Styrofoam cooler. 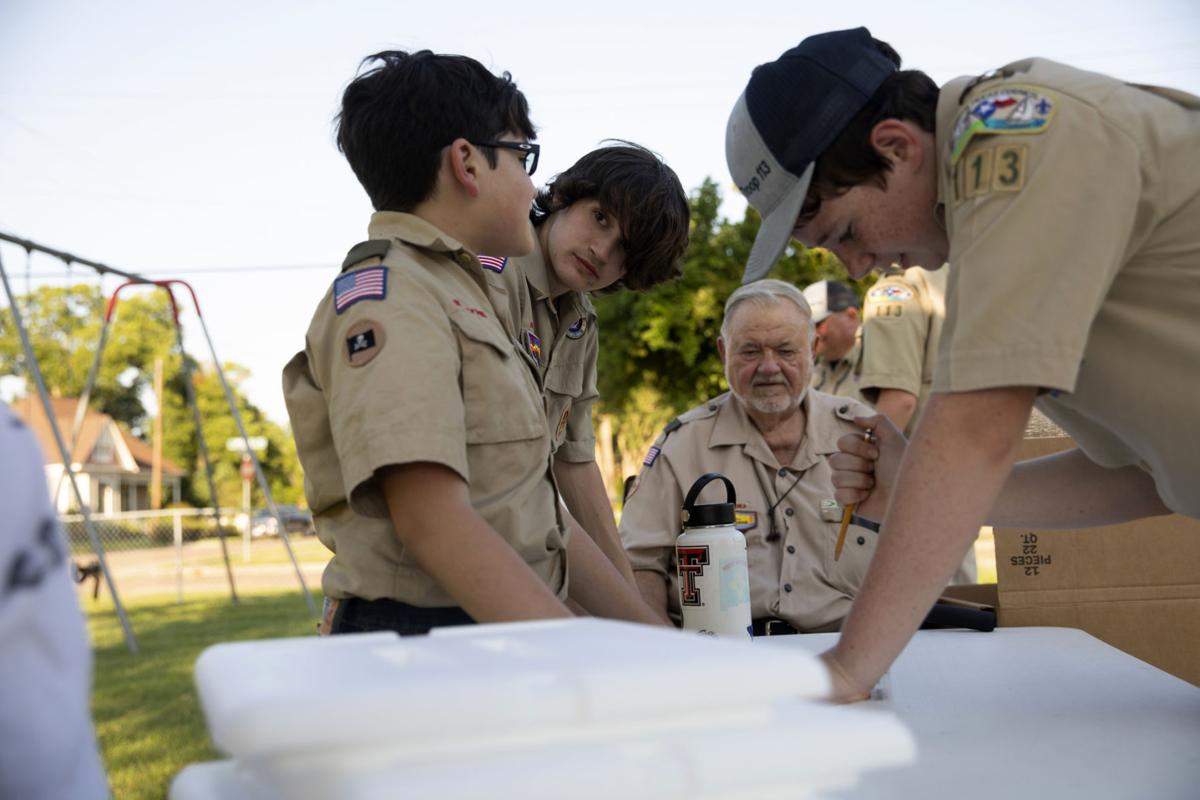 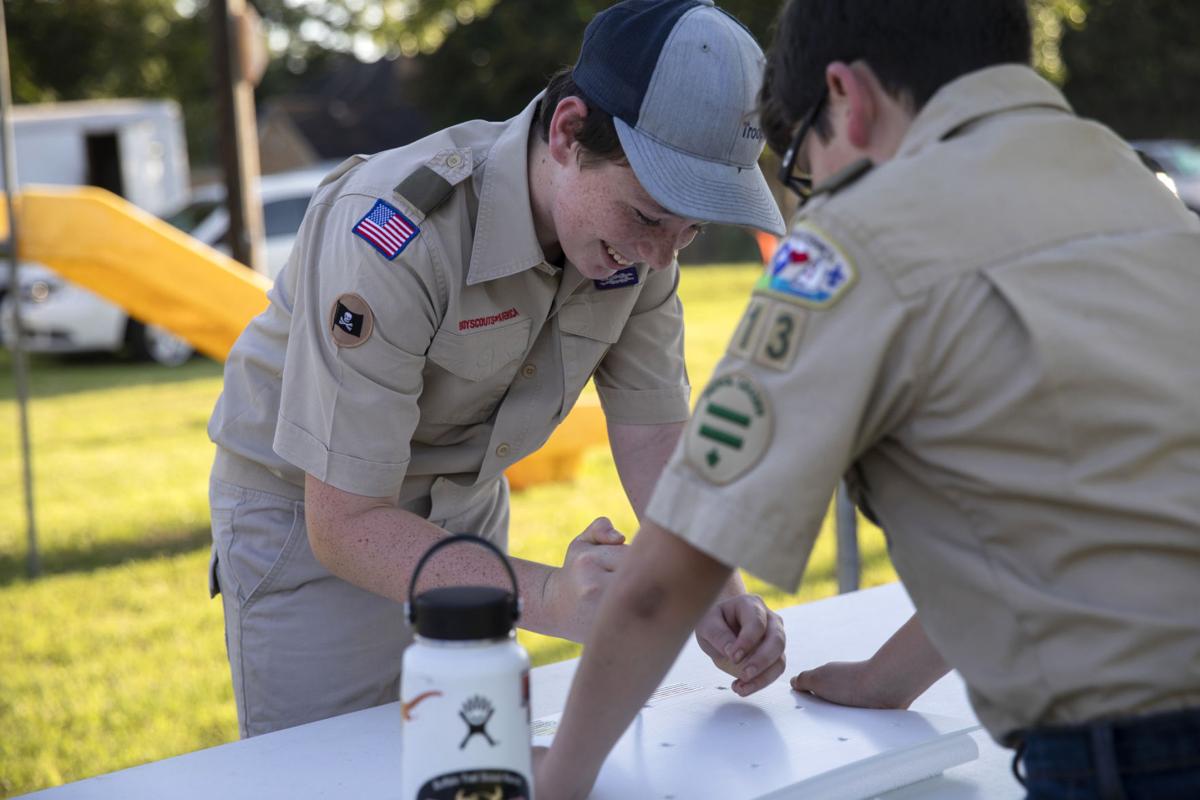 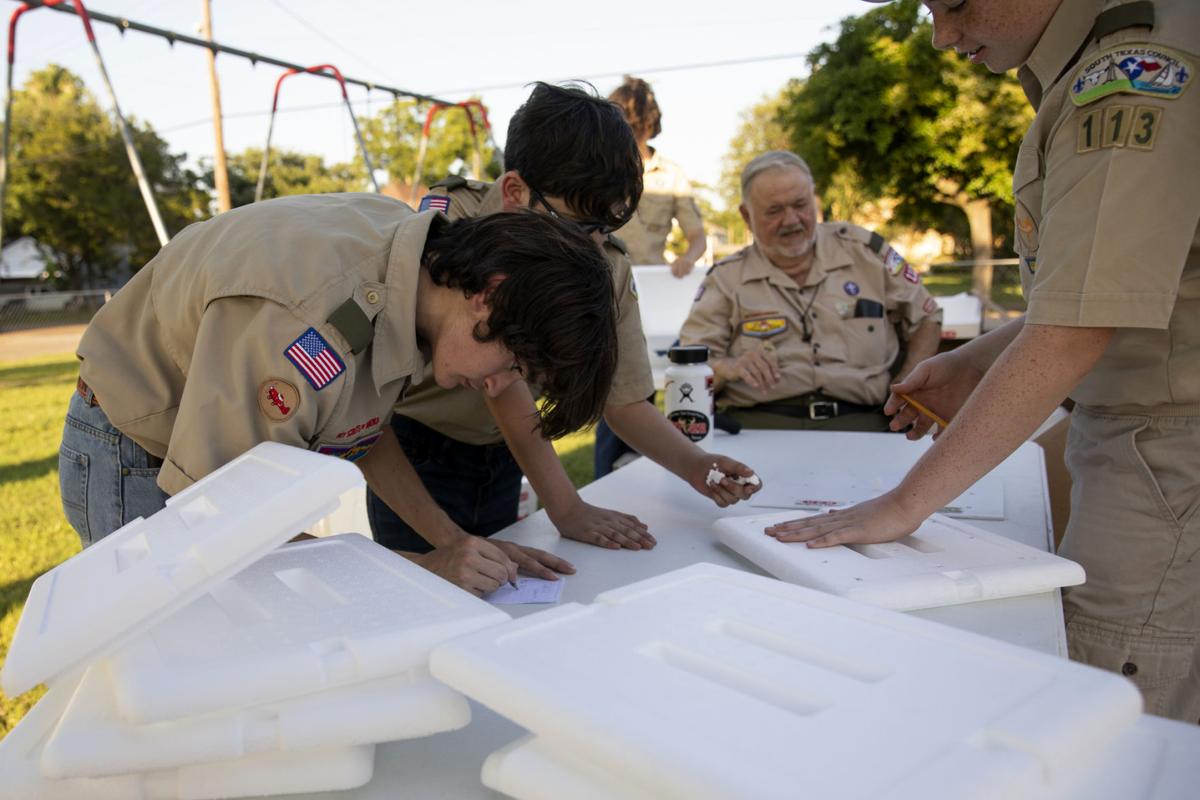 Jack Thompson, 15, drills holes into the bottom of a Styrofoam cooler for sea turtle egg incubators.

Elijah Montgomery, 12, pokes holes into the top of a Styrofoam cooler.

Alex McCaskill, 16, a sophomore at Goliad High School, will soon complete his final project to become an Eagle Scout and, in the process, critically endangered Kemp’s Ridley sea turtles will benefit.

He spent a couple of weekends with his stepfather, Todd Janota, cutting PVC pipe, donated by Padre Island National Seashore, to the sizes needed to construct the carriers. When COVID-19 made it impossible for members of the troop to gather and build the carriers together as planned, Lucas Johnson, scoutmaster, and Joe Saenz, assistant scoutmaster, put the PVC pipe carriers together.

On June 8, members of the troop gathered in a parking lot in downtown Victoria to drill holes in the Styrofoam ice chests donated by H-E-B. The eight holes on each of six sides of the coolers are necessary for airflow. Bungee cords that are stretched across the PVC pipe carriers hold the ice chests in place. The carriers soon will be loaded on trailers and delivered to Padre Island National Seashore.

Each ice chest will hold about 100 ping-pong size sea turtle eggs nestled in sand, Alex said. Each turtle can lay more than 100 eggs.

There are only an estimated 8,000 to 10,000 female turtles left in the wild, said Cynthia Rubio, supervisory biologist with the division of sea turtle science and recovery at Padre Island National Seashore. They are endangered mainly because of poaching and incidental takes by commercial fisheries. Mexico is home to 90% of the turtle nests. Fifty percent of the nests in the United States are located at the Padre Island National Seashore.

“This is the most critically endangered sea turtle species,” Rubio said. “After 40 years of efforts in the U.S. and Mexico, we are starting to see them come back. Because of the human impacts, we have an obligation to protect the species.”

As part of a patrol program at the park and along the coastline, groups of employees, interns and volunteers look for turtle tracks on beaches from sunrise to sunset from April to mid-July. The locations where the turtles nest are marked and the eggs are retrieved and placed in the protective egg carriers. The carriers, which can be safely strapped in vehicle seats, were invented more than 20 years ago to prevent bouncing that might cause damage to the eggs.

While Alex attended required training to aid in retrieving and transporting the eggs back to the facility, he cannot partake in the activity because of coronavirus. A small group of highly experienced volunteers and employees are assigned to the task this year.

The eggs remain in the coolers in the incubation room for 45 to 50 days until the turtles hatch. They are released immediately. So far this year, eggs from 255 Kemp’s Ridley sea turtle nests have been collected along the coast. They expect to reach at least 300 and hope to beat the 2017 record of 353 nests.

“We are happy about their hard work and can’t wait to get the boxes,” Rubio said of the Boy Scouts.

Alex’s father, William “Billy” McCaskill, and grandfather, William A. McCaskill, were Eagle Scouts, so he wanted to keep the tradition alive. He said the experience has helped him build leadership skills and taught him about the importance of patience and teamwork. After high school, he plans to attend Texas A&M in Galveston to become a marine biologist.

“I didn’t just want a boring Eagle Scout project like building a few park benches and calling it done,” he said. “I really like sea turtles. They fascinate me.”