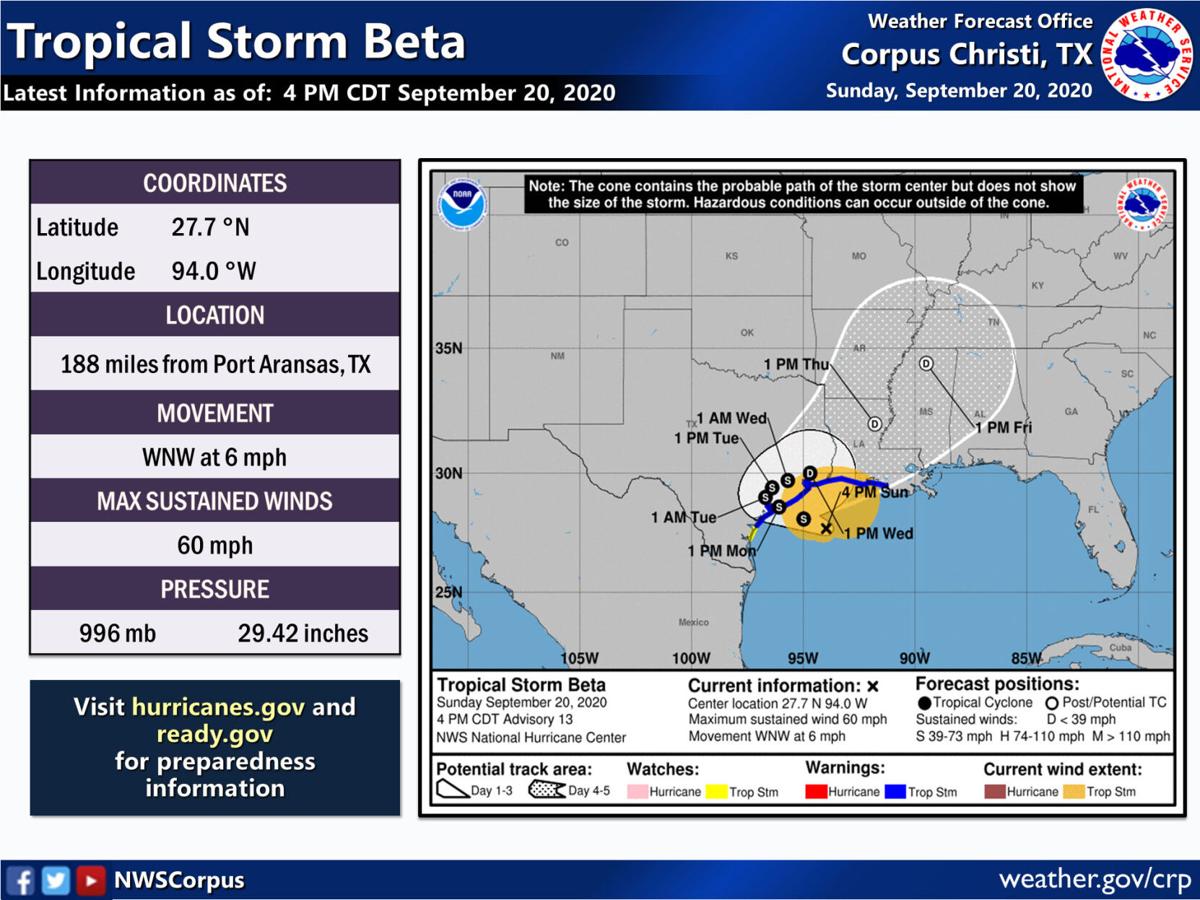 Tropical Storm Beta is predicted to hit the middle Texas coast on Monday. Some Crossroads schools closed in advance of the impending weather. 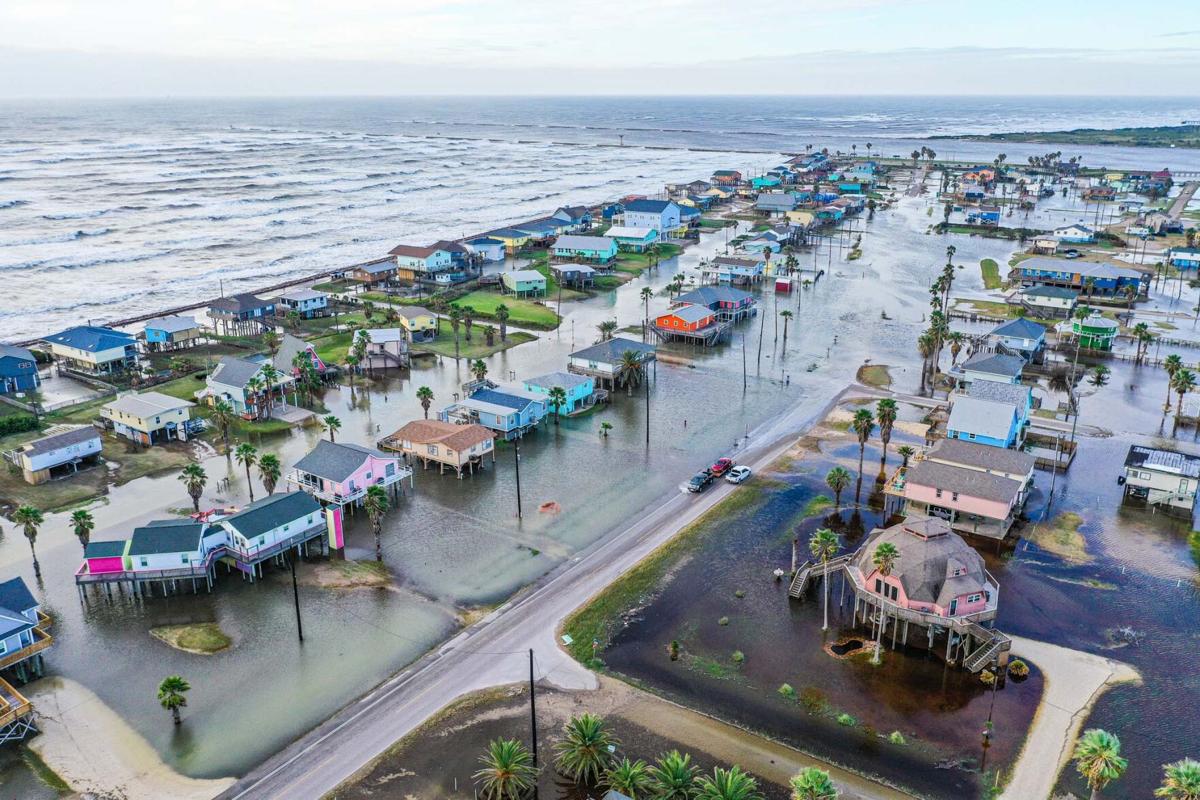 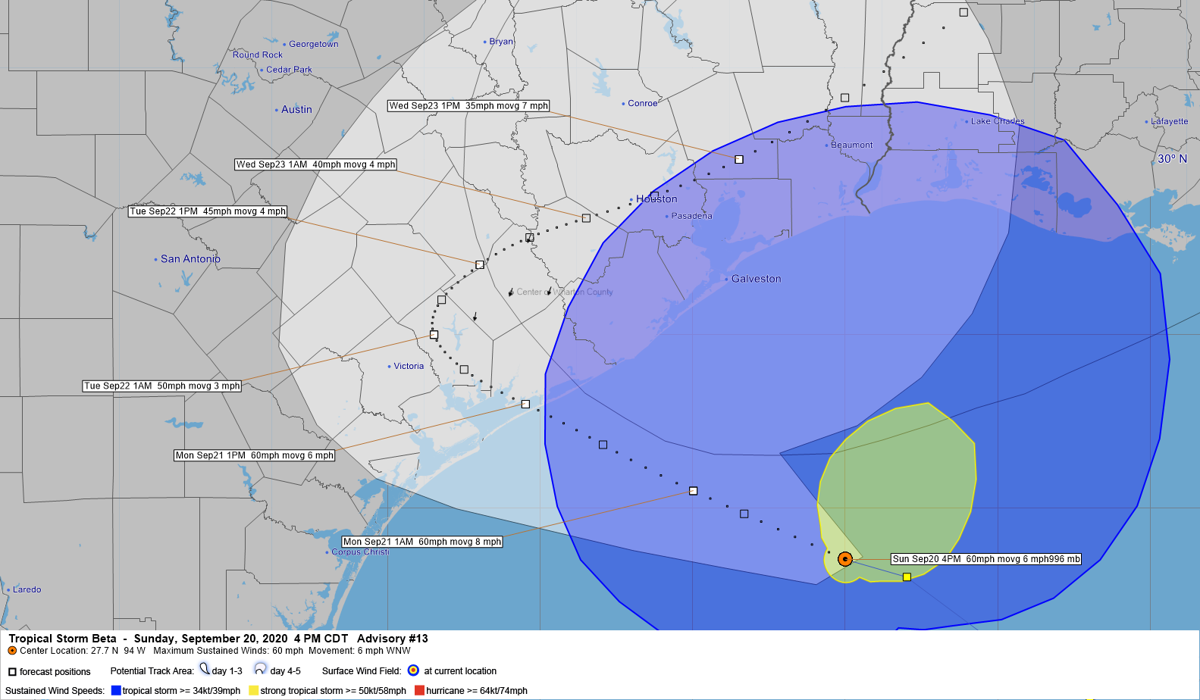 Tropical Storm Beta is predicted to hit the middle Texas coast on Monday. Some Crossroads schools closed in advance of the impending weather.

School closures and county-wide orders were issued Sunday for parts of the Crossroads as Tropical Storm Beta approaches the coast.

In advance of the storm, a shelter-in-place order for Calhoun County and a voluntary evacuation for Jackson County were issued along with closures for some Crossroads school districts.

The University of Houston-Victoria closed its Victoria and Katy campuses Monday.

About 9 p.m. Sunday, City of Victoria officials announced the closure of all city facilities and cancellation of trash and recycling services for a 24-hour period. Victoria County closed all nonemergency facilities Monday.

Tropical Storm Beta is predicted to make landfall near Port O'Connor Monday afternoon as a tropical storm, rather than a hurricane, according to National Oceanic and Atmospheric Administration.

A tropical storm warning, in which power outages are possible, is in effect until further notice for Victoria, Goliad, Refugio, Calhoun, Jackson, Wharton and Matagorda counties. Winds of 40 to 50 mph and gusts of up to 60 mph are possible. The maximum sustained wind speed of the storm as of 10 p.m. was 60 mph.

A storm surge warning is in effect for parts of Refugio, Calhoun, Jackson and Matagorda counties. The surge has the potential to raise water 2 to 4 feet above normally dry ground and presents a “dangerous, life-threatening situation,” according to an NWS news release.

Winds will be strongest Monday to Tuesday, said NWS meteorologist Melissa Huffman at a Sunday evening meeting with the Victoria Office of Emergency Management.

A flash flood watch also is in effect through Tuesday night.

Five to 8 inches of rain are predicted for the Crossroads with largest rainfall amounts to the right of the storm’s center. Up to 10 inches of rain is possible in coastal areas.

Winds: Most likely time of arrival for tropical-storm force winds along the Middle Texas Coast is later this evening.

Rainfall: Rainfall amounts will be highest along and to the right of the center of the storm.

Victoria Crossroads: 5-8” with isolated amounts to around 10" possible.

Flash flooding will be possible within areas that receive the heaviest rainfall.

Storm Tides: Tides will continue increasing tonight, and coastal flooding is expected to continue through Tuesday morning. Significant dune erosion could occur with this storm.

School was canceled Monday for the following schools and districts:

You can find the Advocate's latest updates on Tropical Storm Beta by clicking here.

Sure am happy this is not a real storm.

Right on, Leonard. For those with lawns and plants, which is most of us, this provides a perfect end of summer pick-up and recovery.