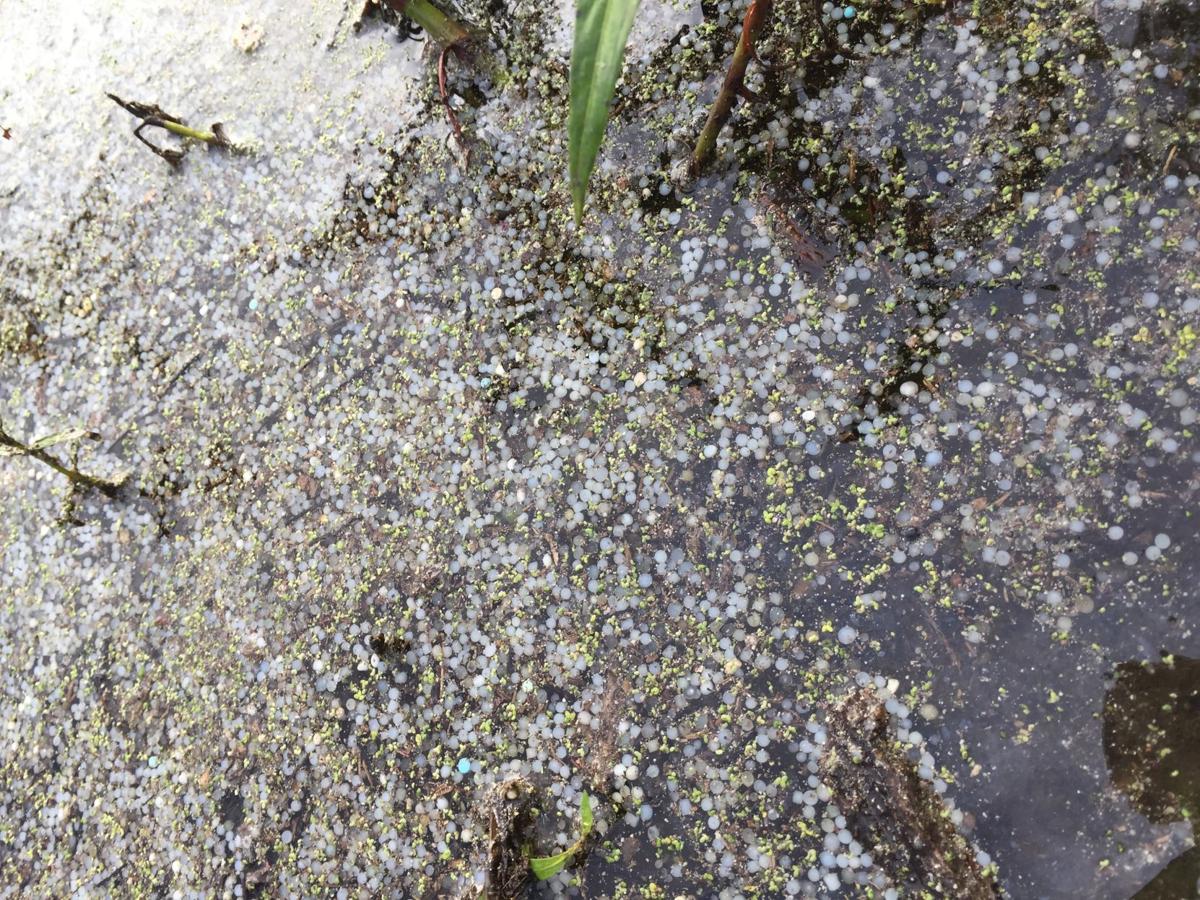 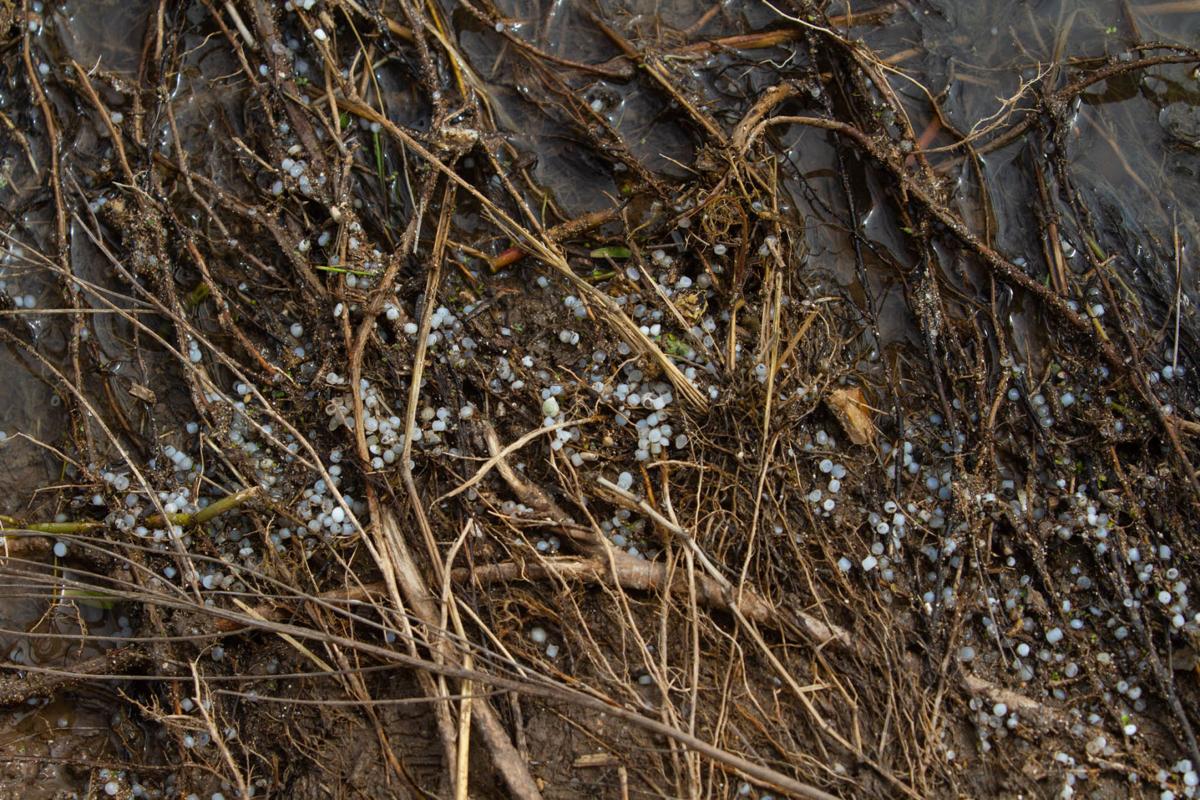 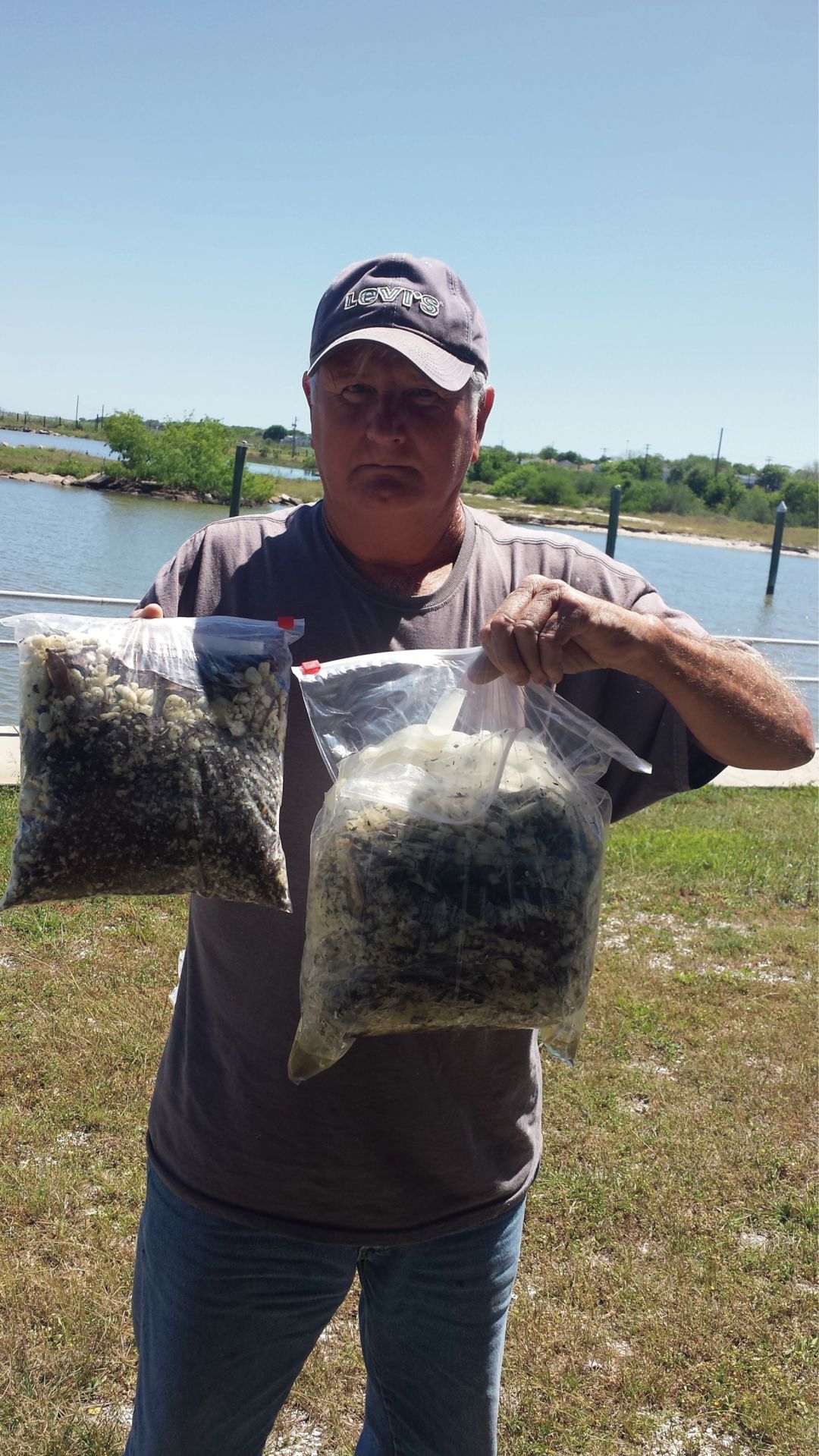 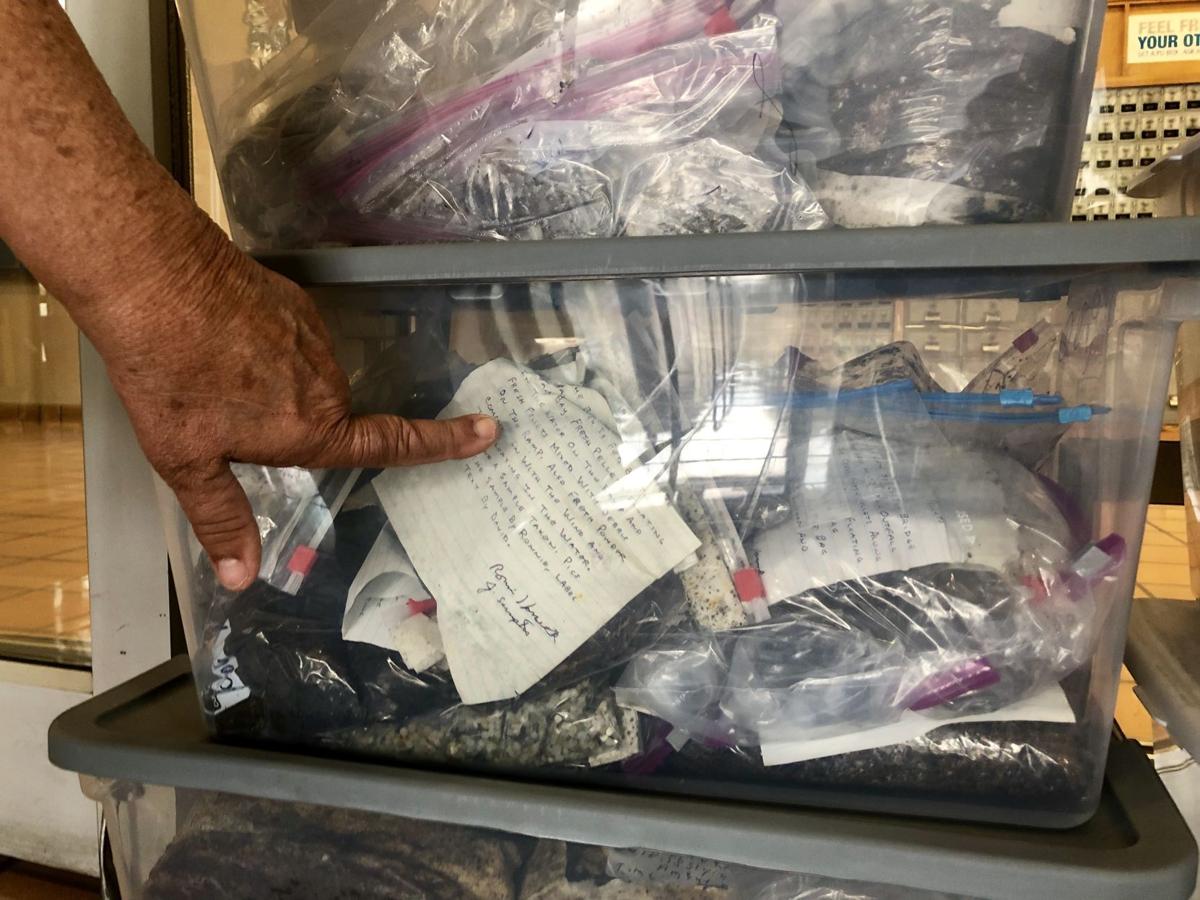 Crossroads plaintiff Diane Wilson pointed to a note included with a sample of plastic pellets and powders on the first day of a lawsuit filed against Formosa Plastic Corp. 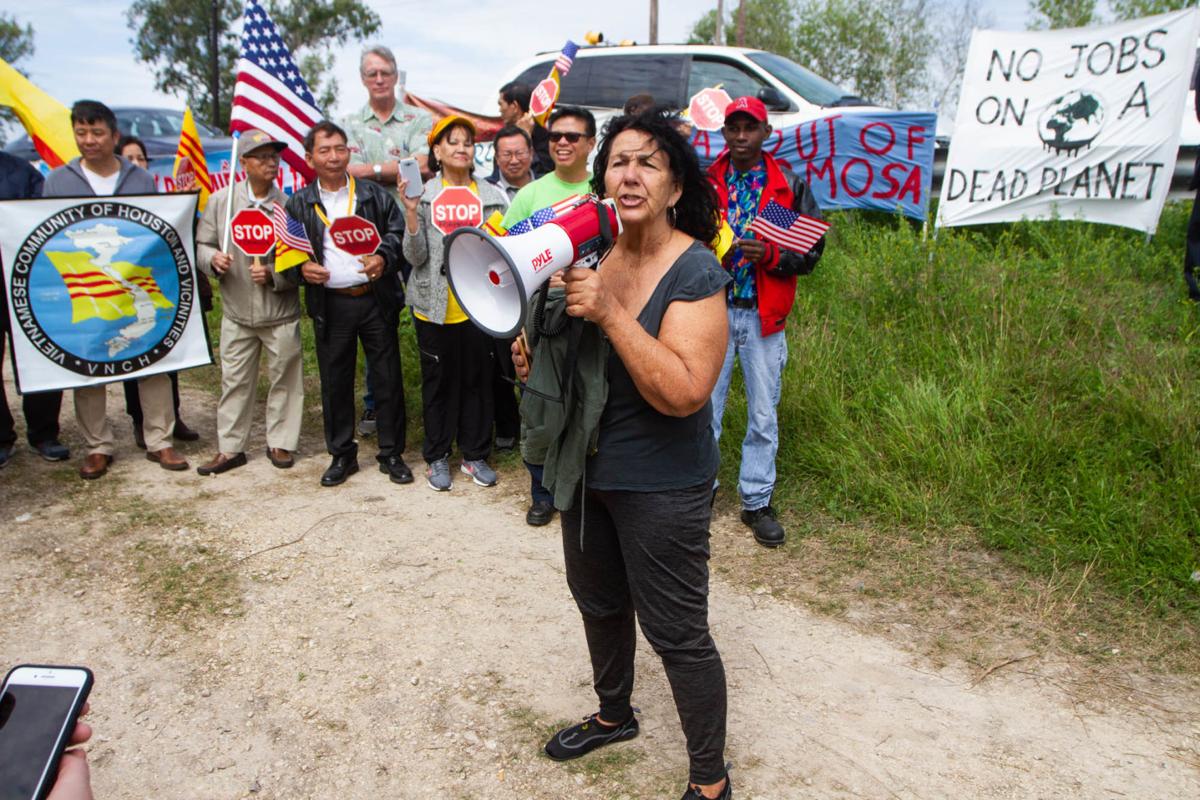 Diane Wilson rallies activists about pellets by Formosa Plastics near the Lavaca Bay and Cox Creek.

Adversaries became partners Tuesday morning at the federal courthouse in Victoria where a judge approved the largest settlement on record of a Clean Water Act lawsuit filed by private individuals.

“I appreciate the opportunity to share good news and be confronted with good news,” said U.S. District Judge Kenneth M. Hoyt, who will formally sign the document on Thursday. “I think this is a great thing because we need to be concerned about how we lead the community.”

Hoyt agreed with the $50 million settlement from Formosa Plastic Corp., which he characterized as a “serial offender” of the Clean Water Act for discharging plastic pellets into waterways after environmental activist Diane Wilson and San Antonio Bay Estuarine Waterkeeper members collected more than 2,400 plastic pellet and powder samples presented during the trial.

The corporation agreed to zero discharge of plastic pellets in addition to the funds, which will be allocated entirely to pollution mitigation projects in Calhoun County during the next five years.

“It is amazing to come to the end of the lawsuit and the beginning of making the discharges stop and fixing things inside Formosa and cleaning up the bay,” Wilson said. “I think it is precedent-setting, and I hope this is a new beginning.”

If Formosa issues any sort of press release or reference to the projects funded by the settlement, the corporation will be required to specifically state that the projects were undertaken as the result of the lawsuit, as outlined in the public statements section of the consent decree.

“Formosa has been on the front page of some of the newspapers holding the big check as they’re donating $1 million here, donating $2 million here, and actually it was part of an environmental enforcement and they had to pay it, and that just doesn’t come up,” Wilson said. “So we want people to know it took a lawsuit to get them there and this is due to that lawsuit and those waterkeepers and those citizen activists.”

Wilson is a fourth-generation shrimper from Seadrift who has been fighting Formosa for decades. While the judge’s approval marks the end of a two-year lawsuit, the settlement also rings in the beginning of collaboration between both parties that will start in January.

“If we succeed, I think we will become a model for the industry,” John Riley, an Austin-based attorney representing Formosa, told the judge Tuesday.

The hope is to have an engineered process that other facilities discharging plastic pellets can use as a model, said Amy Johnson, an attorney with Texas RioGrande Legal Aid representing Wilson.

The settlement, almost 30 pages long, details how and when Formosa will make plant improvements to eliminate plastic pellet discharge with the involvement of the environmental activists, who will be allowed to review decisions and make objections throughout the process.

If Formosa is found to be in violation again, the corporation will pay for additional documented discharges, and those payments will go into the settlement fund.

Prior to the judge’s ruling Formosa attorneys argued that the lawsuit’s validity was debatable because the Texas Commission on Environmental Quality fined the corporation $121,875 for discharges – less than 1% of the settlement amount.

Hoyt heavily disagreed, writing that “TCEQ’s findings and assessment merely shows the difficulty or inability of TCEQ to bring Formosa into compliance …”

TCEQ did not respond to requests for comments by deadline Tuesday.

Both parties will agree on an official monitor who will make bi-weekly inspections for discharges, but Wilson and members of the San Antonio Bay Estuarine Waterkeeper also plan to continue monitoring.

In fact, Ronnie Hamrick, a member of the Waterkeeper and former Formosa employee, was out collecting discharge samples in front of the bayfront marina a few days ago.

“If it wasn’t for the pellets, that is what won the lawsuit and the shear amount of them,” he said. “You’ve got to have the evidence.”

Wilson is particularly excited about the cooperative that will be established by the Federation of Southern Cooperatives to revitalize marine ecosystems and promote sustainable fisheries.

“I love what we’re doing in terms of starting the co-ops and trying to revitalize the fishing because it is in a crisis, and the fishermen that I’ve talked to, the oyster men, the shrimpers, the crabbers, they’re all despondent, and I think, you know, they are concerned that they are seeing the end of it all,” she said. “The potential really is tremendous.”

Calhoun County Judge Richard Meyer acknowledged the significant amount of funds that will be put toward projects in the county, particularly the $10 million that will go toward environmental development of Green Lake Park and $750,000 toward the Port Lavaca YMCA that will be used toward camps for children to learn how to be good stewards of the environment.

The county has granted Formosa millions in tax abatements since the corporation moved into Point Comfort in 1983.

“These things happen and hopefully this is an awakening to all of the industrial industries in the county and the surrounding counties to keep this from happening,” he said.

The $50 million will go toward the following projects:

Formosa Plastics agreed to pay $50 million for polluting waterways Tuesday, setting a record for the largest settlement of a Clean Water Act l…