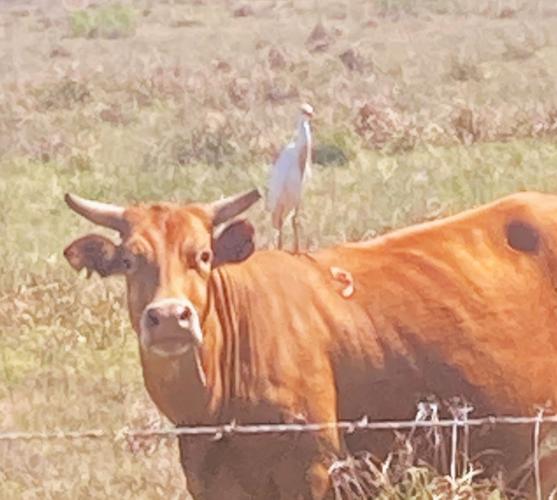 A cattle egret taking a ride. 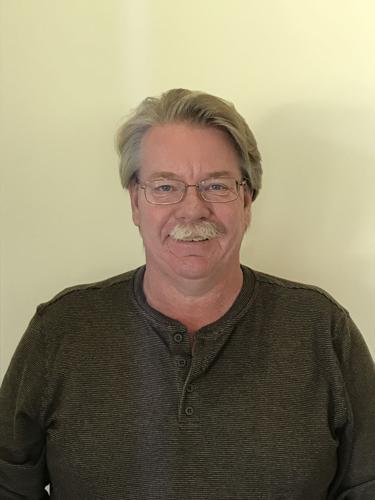 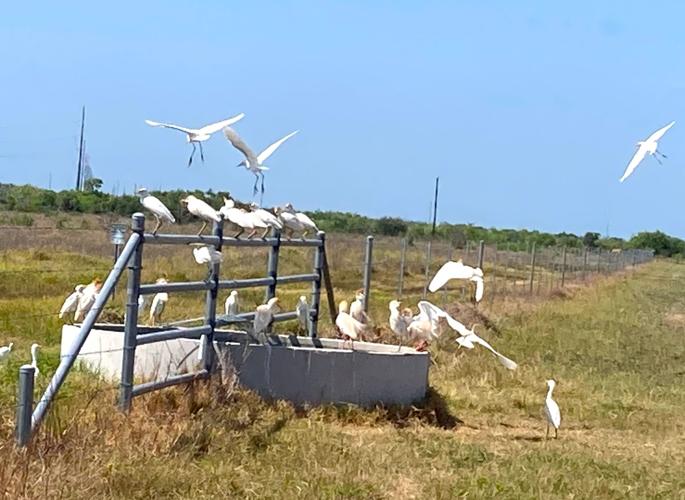 Cattle egrets flock together to get a drink. 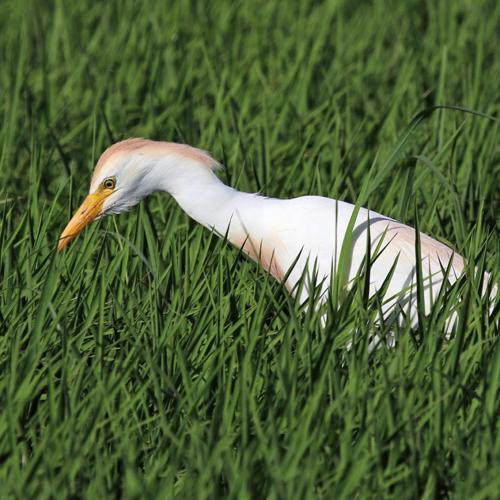 The bright white of a cattle egret’s plumes is easily spotted.

Some bird species are very content to stay put in a certain geographical area and never expand their range. They might migrate seasonally, but their range never shifts or grows. Other species seem to have a penchant for world domination.

One of those birds that seems to have exploded into most of the world in the last century is the cattle egret. They are originally from Africa and some parts of Asia. But they are very adept at traveling to new regions and moving in.

They somehow got to South America in 1877, landing in the northern parts. It is thought that they were ship “assisted,” meaning that they landed on a freighter crossing the Atlantic and flew off onto shore once in the Americas. It is believed that they did so via the Caribbean islands as their first stop, and then on to South America. And from there they slowly wandered north.

The cattle egrets made it to the U.S. in 1941, when they landed in Florida for their first North America tour. From there, they rather quickly spread across the continent. By 1953 (or maybe well before that) they were nesting in the U.S. Since then, they have become one of our most common wading birds, although they rarely “wade.”

Cattle egrets are most often found in pastures and grasslands, not water, following flocks of cattle or other large animals such as bison or horses. They’re often in large flocks amongst these other animals. The cattle egrets eat the insects that these animals stir up when they’re walking. It’s a perfect symbiotic relationship it seems ... or maybe it’s really more of an opportunistic “partnership,” I suppose.

These birds are even seen sometimes on tops of cows’ backs, riding along, and at times they pick at the ticks on the large animal. If there are grass fires, the Cattle Egrets will comes as close as they can and eat the insects that are escaping the flames. They will also eat pretty much anything they can catch. Small snakes, rodents, frogs and even birds are all on the menu.

These egrets obviously get their name from their foraging partners … normally cows and other grazers. In other parts of the world those grazers may also be elephants, rhinos, camels, or even tortoises. And their names often reflect those species in other parts of their range.

They are rather short, stocky, and thick-necked for an egret, although they do have fairly long legs and bills like their other egret and heron cousins. They are normally all white, with black legs and yellow bill, but in breeding season, their plumage shows orange streaks and patches, and their legs turn orange, as well. Their bills go from yellow to a bright carrot color. Quite striking.

Cattle egrets are colonial breeders, meaning they nest in colonies together in trees, often with many other species of herons or egrets forming a breeding roost. They do so along water ways like marshes, reservoirs, lakes, swamps, rivers, and coastal shores.

They utilize trees for their nests that often hang over water to keep predators away. Their young are just now coming off the nests all along the Texas coast and inland, and it’s a good time to see them feeding in large flocks along roads and in pastures. Next time you see one go ahead and admire them a bit. Their tenacity deserves that much.

Martin Hagne is the executive director of the Gulf Coast Bird Observatory. The GCBO is a nonprofit organization dedicated to saving the birds and their habitats along the entire Gulf Coast and beyond into their Central and South America wintering grounds.

Nature Notes: Spiders of our area

Texas is home to hundreds of different kinds of spiders and the vast majority are not harmful to humans. Two that have dangerous venom (and should therefore be avoided) are the brown recluse spider and the black widow.