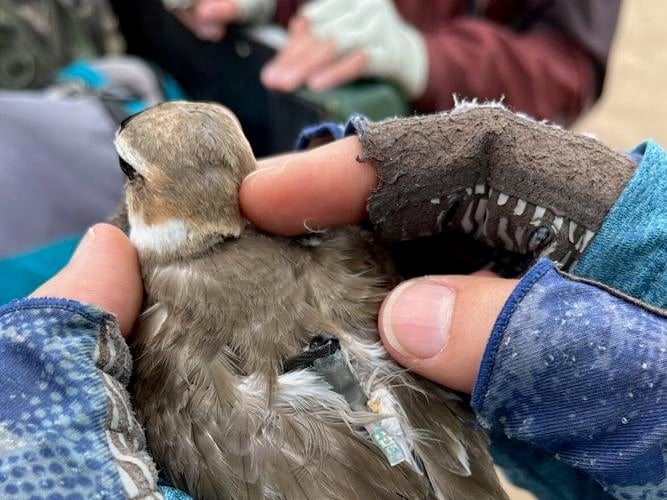 WIPL geolocator: A closeup of what a light-level geolocator looks like. This is the first adult male Wilson’s plover (T6 “Timothy”) to receive a geolocator at Sargent Beach on April 26. 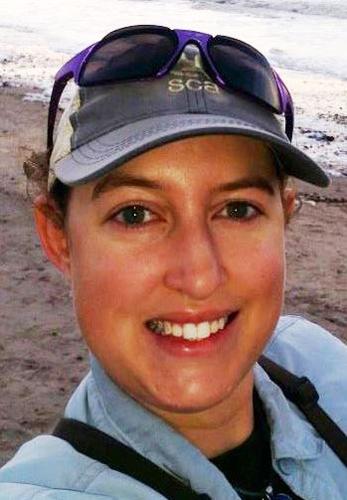 At Gulf Coast Bird Observatory, we are researching beach-nesting birds and the obstacles that they face. We are excited to add a new aspect to our study this year: light-level geolocators.

The main monitoring sites, we are focused on for this project are Matagorda Beach and Sargent Beach. The target species are Wilson’s plover and least tern. The Wilson’s plover is a shorebird that nests in the soft sand along the dunes, mudflats and shelly areas with vegetation. The least tern is a water bird that nests in large groups mainly in flat open shelly areas. Both of these species are protected by the Migratory Bird Act and are considered species of high concern due to habitat loss and disturbance.

For each species, we monitor for pairs, nests, and chicks. We have banded 21 Wilson’s plover adults (13 Sargent Beach and 8 Matagorda Beach) and 12 Wilson’s Plover chicks so far. Twenty-one adults received some new bling in form of a light-level geolocator to help track these birds over time.

There are many different methods biologists use to help track bird species over time. Banding birds is one of the most common ways; we attach a lightweight band to the bird’s leg with a unique number combination, let the bird go, then wait for the banded bird to be re-sighted. This is a simple method, but it relies on someone spotting it and reporting it, which often doesn’t happen.

Another tracking method is the use of nanotags, which send out a signal that can be picked up using a receiver. At Gulf Coast Bird Observatory, we use this method for our Loggerhead Shrike project. This method is more effective and allows a better way to track a species in real time using telemetry equipment.

For our research with the Wilson’s plover, we are using light-level geolocators. We are hoping to find out where the Wilson’s plover migrate for the winter. We already know where they breed, so figuring out where they winter will give us a better understanding of the species as a whole. These geolocators are different from nanotags in that they don’t emit a signal. Instead, they measure light levels.

Nature Notes: We have carnivorous pants in Texas

The geolocator is attached on the back of the bird like a backpack using a harness that wraps around the legs and doesn’t hurt or hinder the bird’s movement. Each geolocator has a microchip to store data and a light sensor that sticks out. Based on the light levels over the course of the day, latitude and longitude can be determined, resulting in a rough location. Latitude is calculated from day length from sunrise to sunset. Solar noon (the point when the sun is highest in the sky) is different across the globe, and helps determine longitude.

This type of geolocator is a little less expensive than nanotags and tend to last longer since they don’t need as much battery to operate. They are also incredibly lightweight. But because they don’t emit a signal or have a GPS, there is no way to track the bird in real time. We simply have to rely on the bird coming back the following breeding season, when we can catch it and remove the backpack.

Nature Notes: The shoebill is a 'living dinosaur'

The geolocator then gets transferred back to the company that made them to download the data off of them. Then the data is analyzed using a specific program. We will not know until next breeding season if any of them come back, but we are hoping for the best.

On behalf of Gulf Coast Bird Observatory, thank you for reading and please remember to fish, swim and play 50 yards away from beach nesting birds and their chicks.

Taylor Bennett graduated from Old Dominion University with a Bachelor of Science degree in Biology concentrating in Marine Biology, and performs shorebird surveys along the upper Texas Coast. The GCBO is a nonprofit organization dedicated to saving the birds and their habitats along the entire Gulf Coast, and beyond into their Central and South America wintering grounds.

Nature Notes: Spiders of our area

Texas is home to hundreds of different kinds of spiders and the vast majority are not harmful to humans. Two that have dangerous venom (and should therefore be avoided) are the brown recluse spider and the black widow.

Do you support the construction of an oil refinery near Victoria County’s Bloomington?