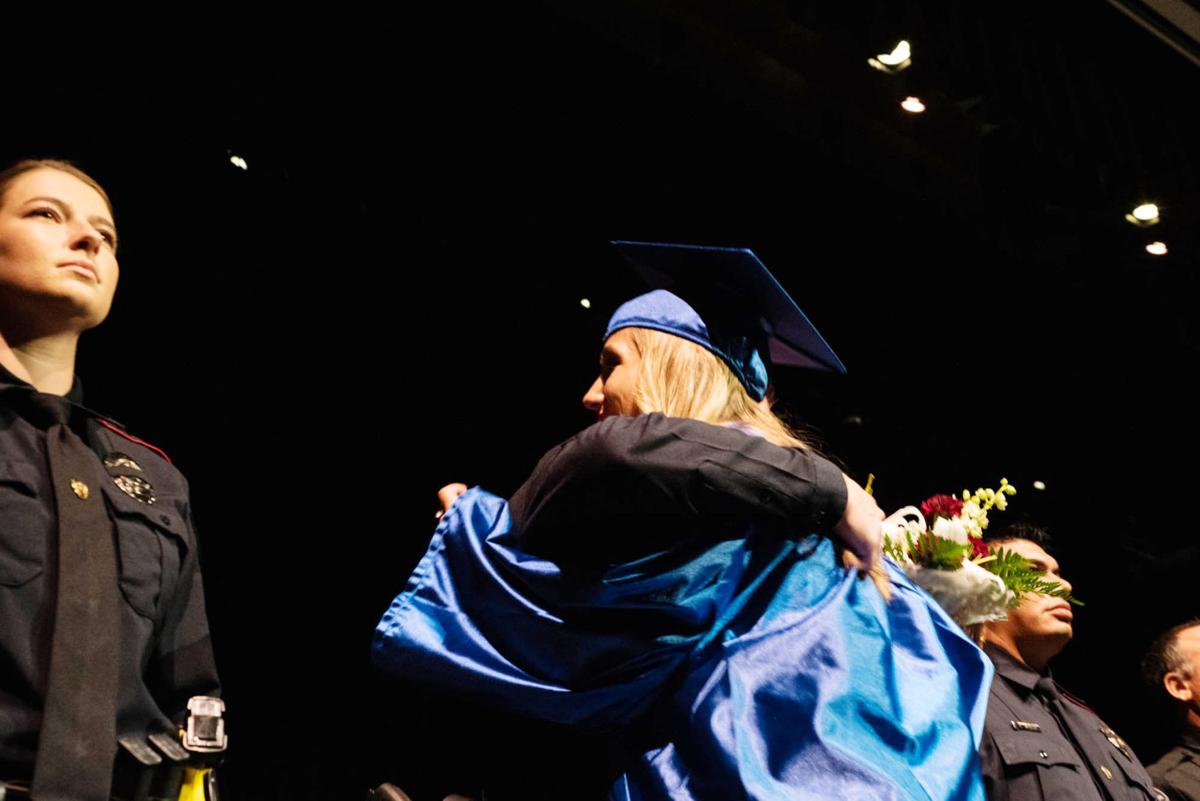 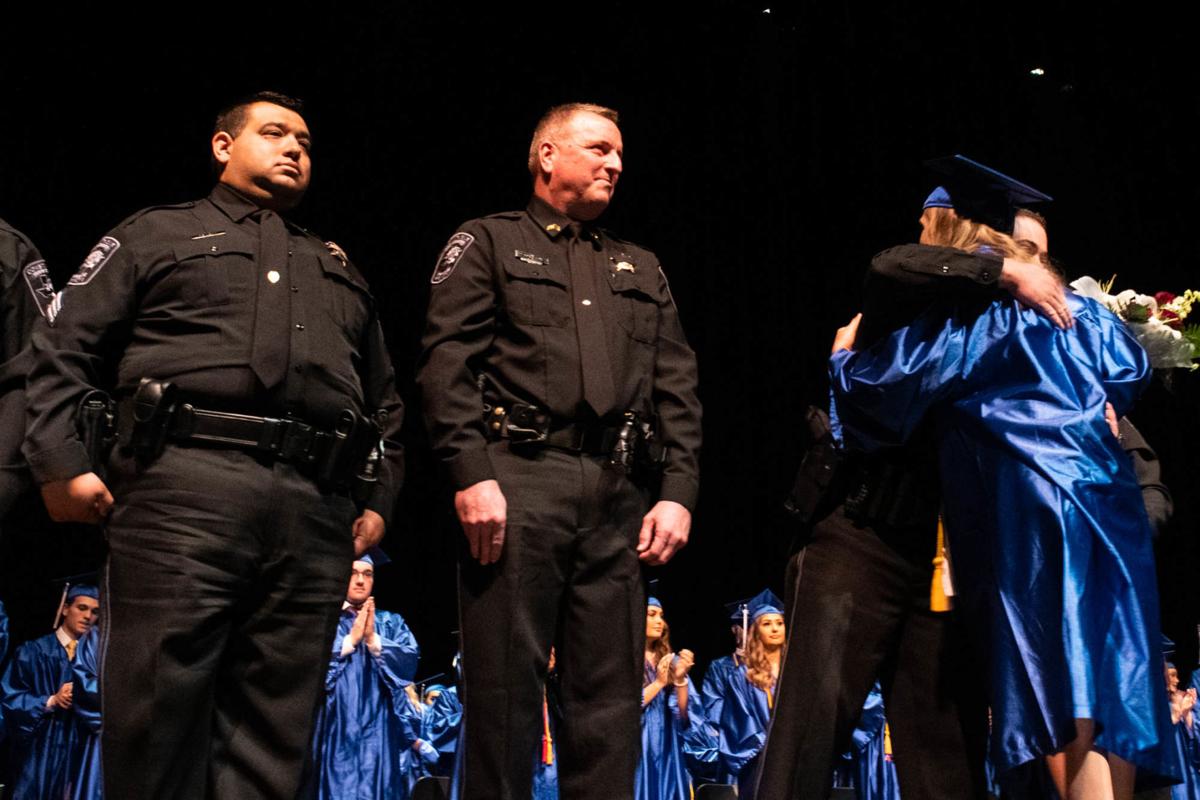 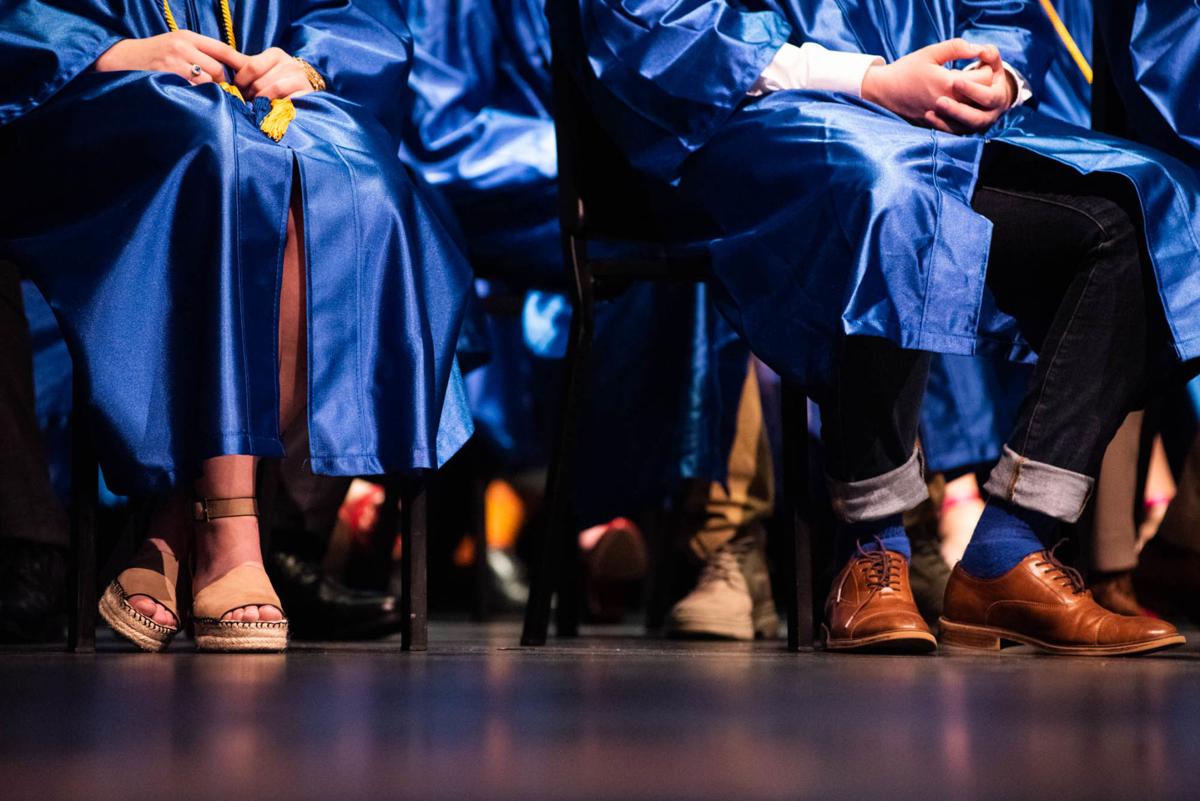 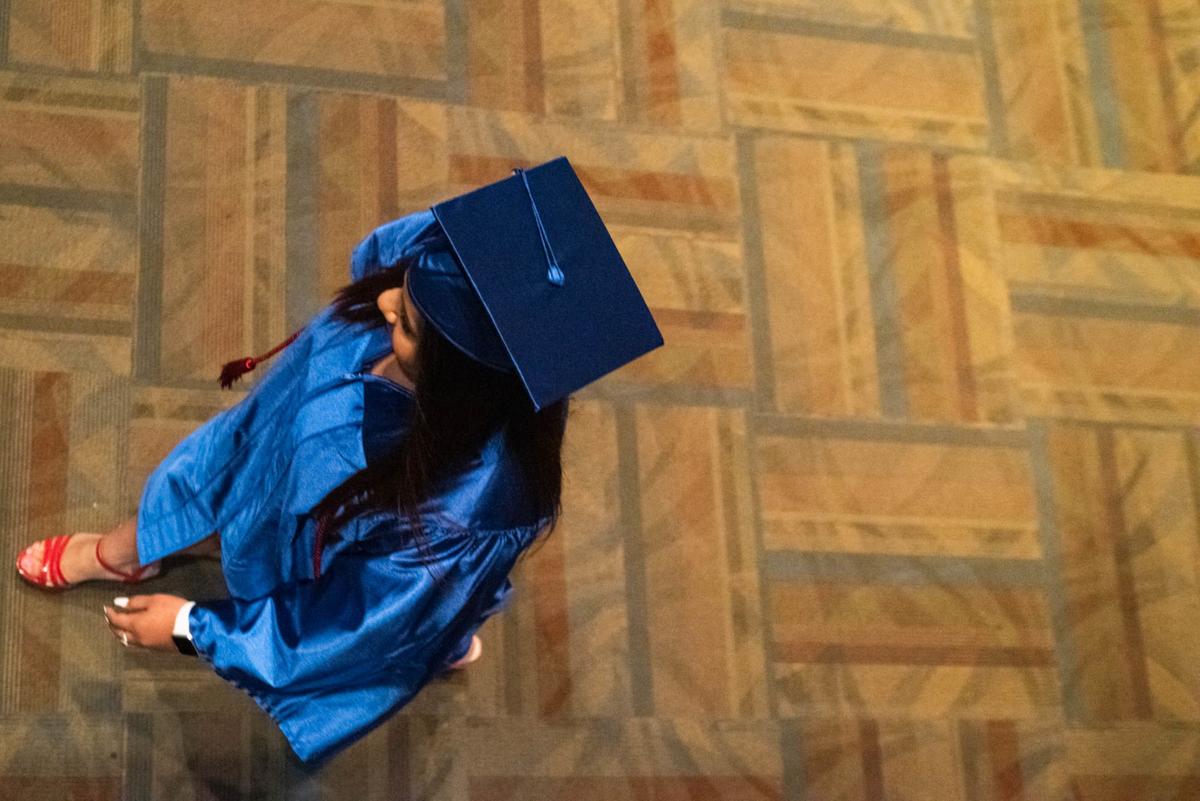 A St. Joseph student walks to her seat during graduation Sunday afternoon. 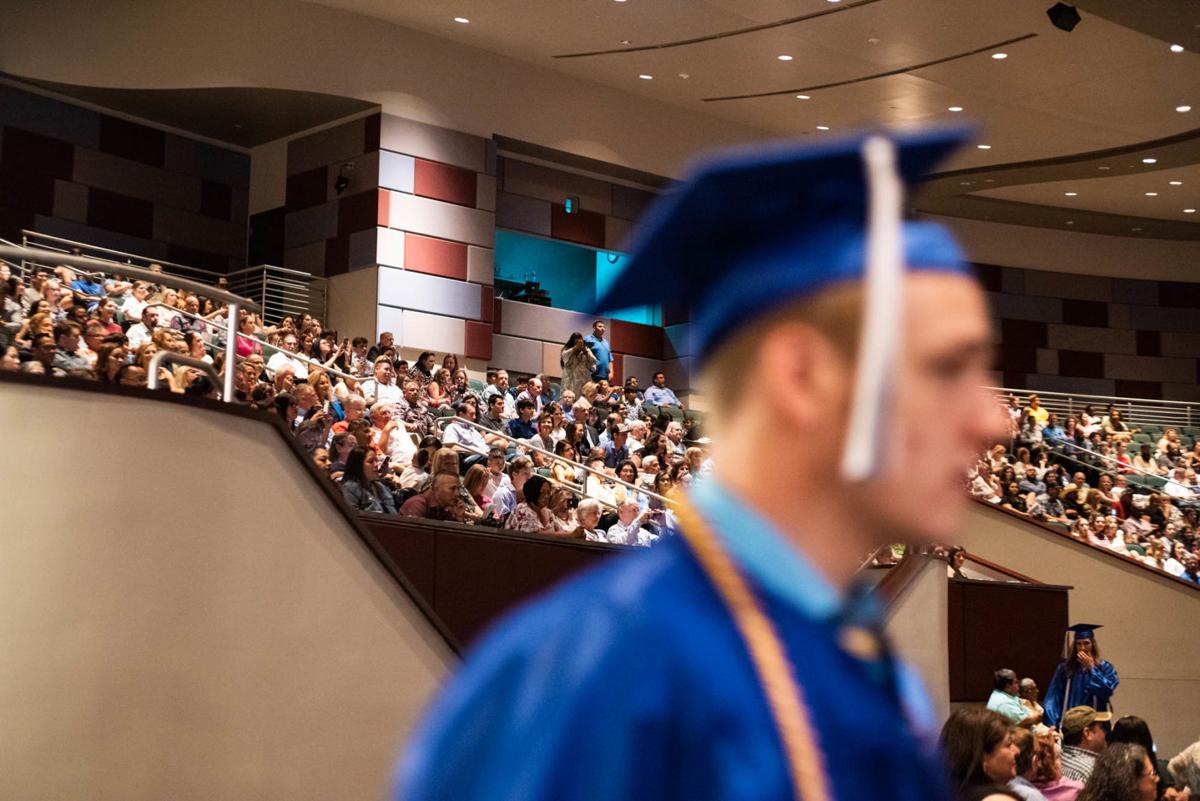 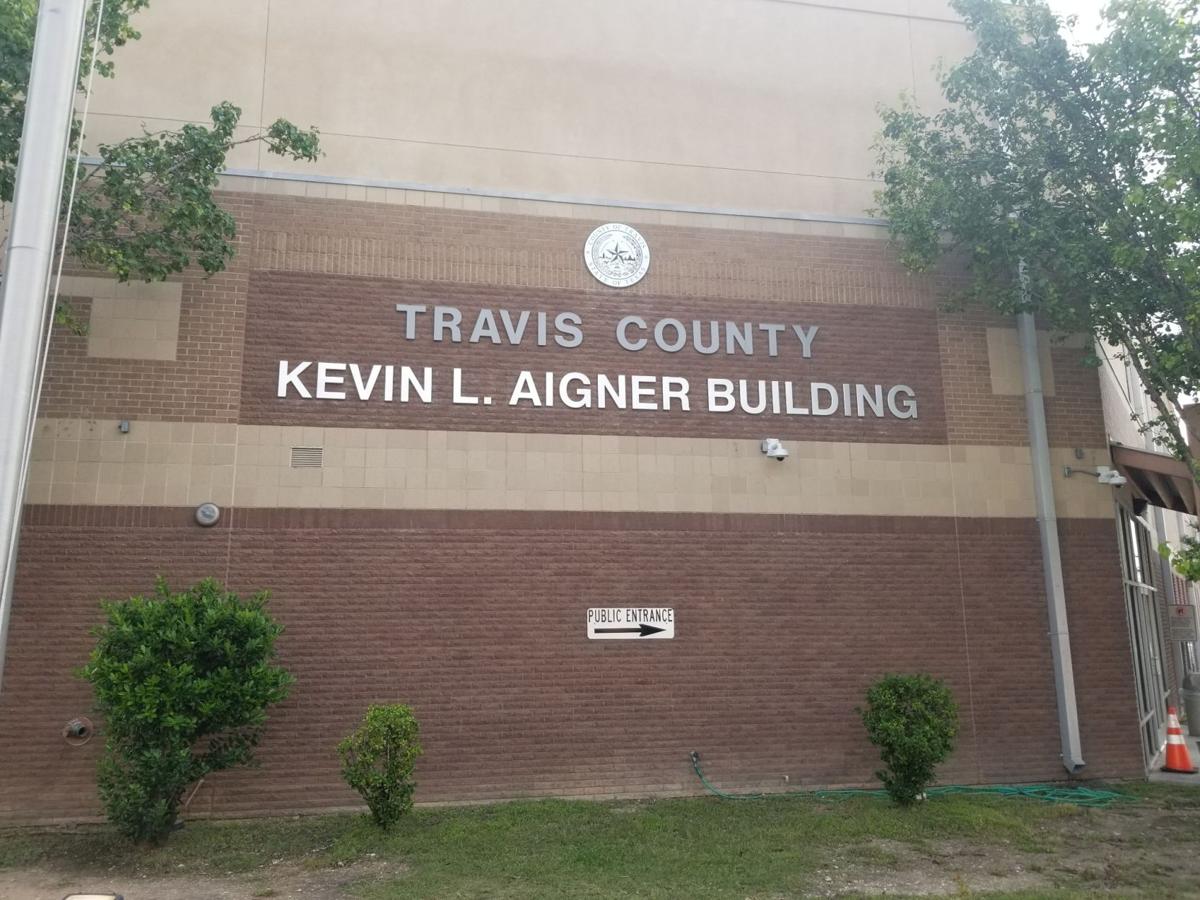 A St. Joseph student walks to her seat during graduation Sunday afternoon.

Aigner, who worked for the county’s Precinct 2 Constable Office, died in 2011 while helping victims of the Steiner Ranch wildfire.

In a tribute to her father and to her accomplishments, deputies from Travis County and officers with the Victoria Police Department paid special tribute to the Aigner family and the corporal’s sacrifice during Sunday’s ceremony. When Tatum Aigner received her diploma, nine uniformed officers joined her onstage to congratulate her.

“It felt like he was here,” said Kelley Metzler, Tatum’s mom.

Metzler, who was joined Sunday by her husband, Burt Metzler; Tatum’s siblings; and other family, said she felt “more pride than I knew I was able to feel” as she watched her oldest child cross the stage.

Tatum’s father collapsed on the job while helping victims of the Steiner Ranch wildfire, which destroyed 23 homes in the small community located about 20 miles west of Austin. He was 38 when he died and had spent days working through intense heat and heavy smoke to help families evacuate and help firefighters, the Austin American-Statesman reported. Aigner began his law enforcement career with the Calhoun County Sheriff’s Office, where his father was a sergeant.

Deputy Vincent Dodd remembered Aigner as a caring colleague with a “massive heart.” Dodd joined the Travis County Constable Precinct 2 office in 2006. After years of working as an emergency room nurse, Dodd decided to begin a career in law enforcement.

“Kevin Aigner was one of the people that knew I was a rookie in the middle of my life, and he was always there to help,” Dodd said. “If there were more people like Kevin in law enforcement, law enforcement would have a better image. That’s the type of person Kevin was.”

The county decided to rename its Precinct 2 building in Aigner’s honor earlier this year.

Tatum Aigner graduated third in her class and was recognized as the school’s top female academic athlete because of her GPA and her athletic ability on the school’s cross country and track teams. Aigner plans to go to Texas A&M University and eventually wants to become a veterinarian.

“It feels good to be able to make my family proud,” she said. “I’m sure he would have supported me no matter what I chose to go into.”