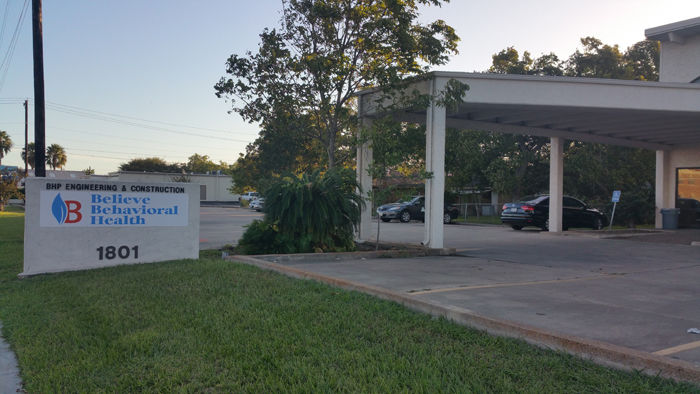 The outside of Believe Behavioral Health. 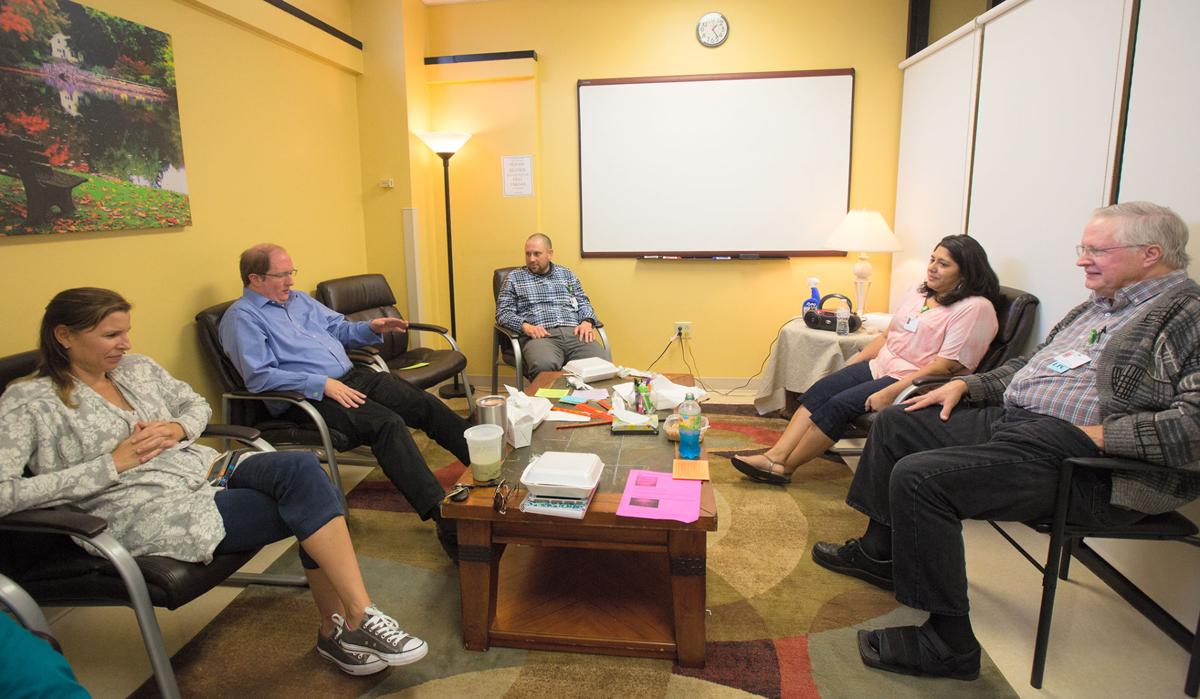 From left to right, Eliza Welder, James Haliburton, Joseph Smullen, Jacqueline Perez and Steven Gengenbacher discuss past issues or situations they've encountered while speaking to patients during an intensive outpatient program at DeTar Counseling and Wellness Center. During the meeting they give each other advice on situations they've come upon. 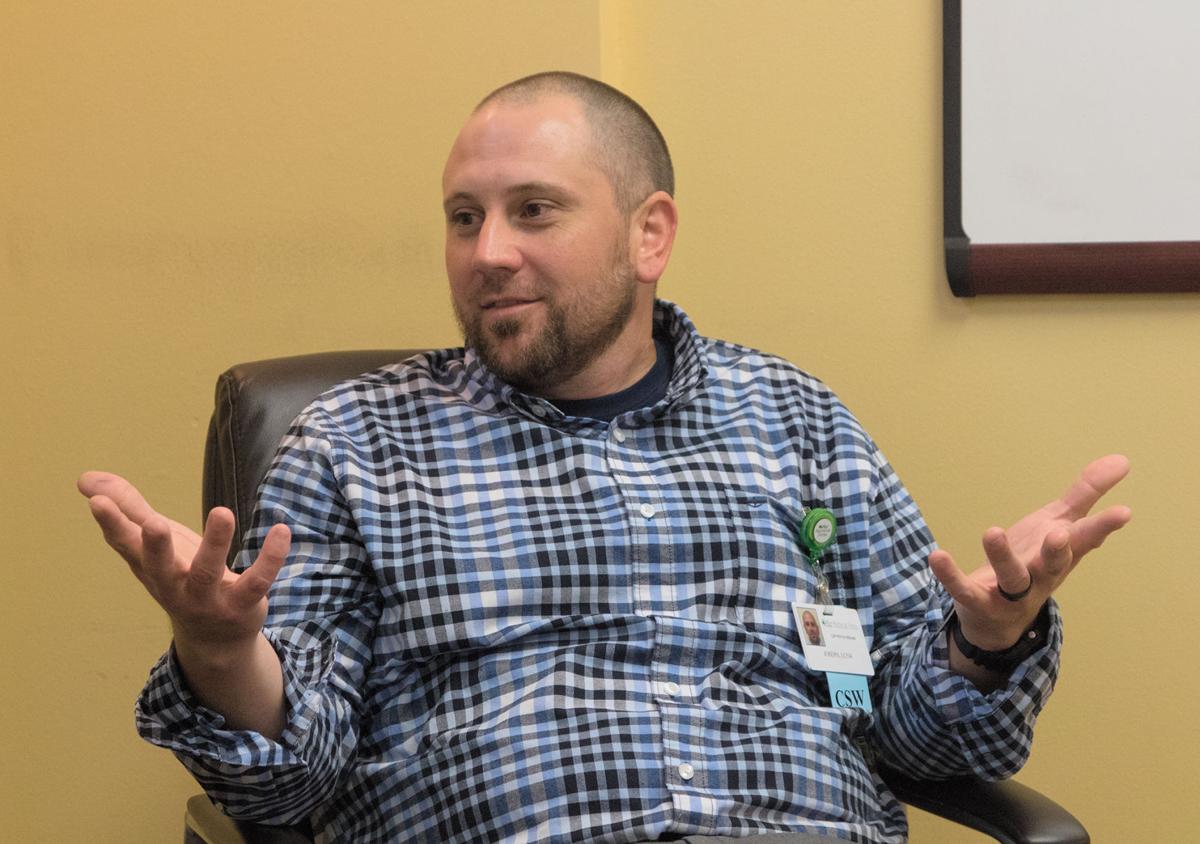 Joseph Smullen, licensed clinical social worker, discusses past issues and situations he and other counselors have encountered while speaking to patients during an intensive outpatient program at DeTar Counseling and Wellness Center.

The outside of Believe Behavioral Health.

From left to right, Eliza Welder, James Haliburton, Joseph Smullen, Jacqueline Perez and Steven Gengenbacher discuss past issues or situations they've encountered while speaking to patients during an intensive outpatient program at DeTar Counseling and Wellness Center. During the meeting they give each other advice on situations they've come upon.

Joseph Smullen, licensed clinical social worker, discusses past issues and situations he and other counselors have encountered while speaking to patients during an intensive outpatient program at DeTar Counseling and Wellness Center.

One by one, people entered DeTar's Counseling and Wellness Center, a building tucked discreetly behind the hospital on the north side of Victoria.

They greeted each other, sipped coffee from Styrofoam cups and sat down.

A hot pink flier advertising the date and time of the group's meeting sat on the center table. It showed a picture of clouds clearing over a flat horizon, a metaphor for what they would be discussing that day.

What will their future look like one, five or even 10 years from now?

Some marveled at being able to answer that question; it meant they could see the clouds clearing.

"I get to chase my dreams again," said one man, who has depression and is nine months sober.

Although many programs for those with mental illness have been cut in the Crossroads, a few remain to fill some of the gaps in treatment.

DeTar's Counseling and Wellness Center, or the intensive outpatient program, is one of them. Believe Behavioral Health is another.

Started in July 2013 with a grant, the center serves people 18 and older. Patients do not need a referral nor a diagnosis of mental illness, but a behavioral issue interfering with their life to qualify.

A nurse does an initial screening and within a day or two, the patient is placed into group counseling led either by Steven Gengenbacher, a licensed professional counselor and licensed marriage and family therapist, or Joseph Smullen, a licensed clinical social worker.

"And they are usually with the psychiatrist within a week," Gengenbacher said of DeTar's psychiatrists, Drs. James Haliburton and Dennis Ugboma. "The speed with which we get these people in, I don't think you really hear that anywhere in Victoria at all."

Before it switched to a new scheduling program this summer, the average time new patients waited to see a psychiatrist at the Gulf Bend Center, the mental health authority for the seven-county region, was six months.

Gengenbacher said the Center is intensive because by the end of its four-week program, patients will have spent 36 hours in group counseling and four hours in individual counseling.

Gengenbacher used to work at the Gulf Bend Center; Smullen at the University of Houston-Victoria.

Both said they were drawn to DeTar because they liked the wisdom shared in the group sessions.

"It's empowering," said Deborah Hoppe, the director of the Center, "to tell your story and have other people find value in it. It is empowering and it helps fight stigma."

Physician Liaison Eliza Welder added, "You may have someone who is 80 years old and someone who is 20 in the same group and still, they can learn from each other."

The program is supposed to be a step up for people not thriving in individual counseling on a weekly or monthly basis and a step down for those discharged from a psychiatric hospital.

While the majority of the patients have commercial insurance, Medicaid and Medicare also cover the program and DeTar works with those without insurance. So far, it has served 238 people. The grant that got the Center going ends on Dec. 31, 2017.

But "there are plans to extend the program in some form another three years after that date," said Jace Jones, an assistant administrator for the DeTar Healthcare System.

"I call this place a recovery center," Gengenbacher said. "My favorite phrase is we're all recovering humans."

Although Daniel Rodriguez's parents did not go to college, they told him it was important that he go. And all through high school, Rodriguez thought, surely, someone would show him how to get there because his parents' best wishes could not.

"I vividly remember graduation was on a Thursday and they told me Friday the diplomas would be ready at the high school. I remember going to get my diploma, and I remember sitting in my car and looking back at the high school and thinking, 'S---, no one showed me how to get to college,'" Rodriguez said.

Rodriguez figured it out, eventually becoming a licensed professional counselor and working for the Gulf Bend Center.

Today, he is the co-founder of Believe Behavioral Health, which he says is the only privately-run counseling centers in the state that offers case management. Case management can help people not only with mental illness but with other dilemmas affecting their quality of life, like the one Rodriguez found himself in years ago.

"I always tell our case workers that people come to you for one thing, but if there's any other way you can help them out in another area, do that," Rodriguez said. "So, we have our case workers running around with their clients like, 'Hey, you've never had a job. Let's do a mock interview,' or, 'Hey, you don't know how to apply for college. I didn't either. Let's figure it out.'"

Rodriguez said its preventative steps like this that keep the burden of serving people with mental illness off their families, emergency rooms and law enforcement.

Until September 2013, case management was a service offered only by and billable to the state's 39 mental health authorities. Senate Bill 58, authored by Sen. Jane Nelson, R-Flower Mound, changed that. It coordinates physical and behavioral health better and increases the number of providers, according to the bill's analysis.

Now, Rodriguez said, privately-run counseling centers, such as Believe Behavioral Health, can bill Medicaid for case management, which incentivizes case workers to work later to ensure someone does not go into a crisis and need hospitalization.

Rodriguez described mental health authorities as top heavy with administration whereas almost everyone working at Believe Behavioral Health sees clients out in the community on a daily basis.

Believe Behavioral Health has five licensed professional counselors, including Rodriguez, and six case workers. A psychologist, David B. Hensley, is credentialed to practice there and a psychiatrist, Dr. Raul R. Capitaine, of Corpus Christi, is also there every Friday.

Rodriguez said being lean makes preventative care such as this efficient.

Since opening in October 2015, Believe Behavioral Health has served more than 200 people.

What events do you miss most from before the coronavirus?