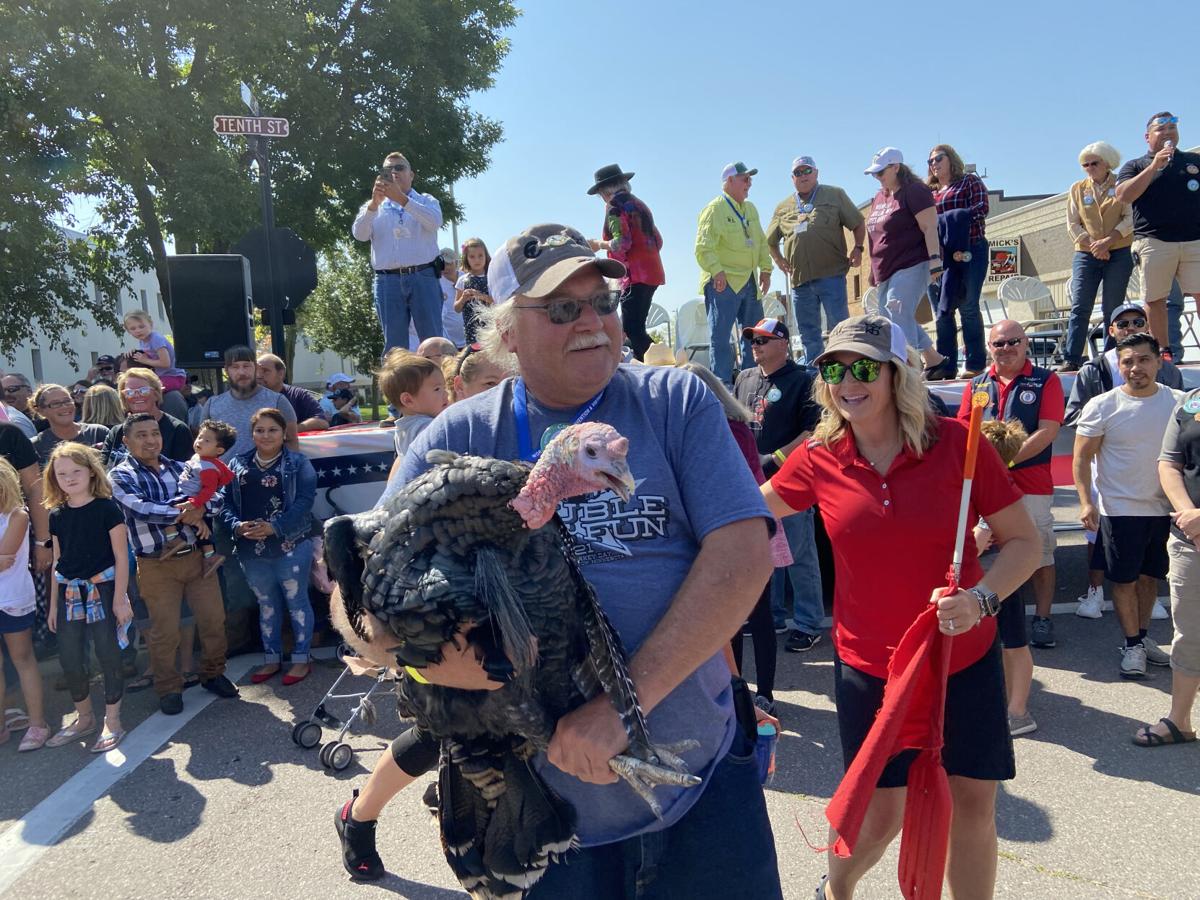 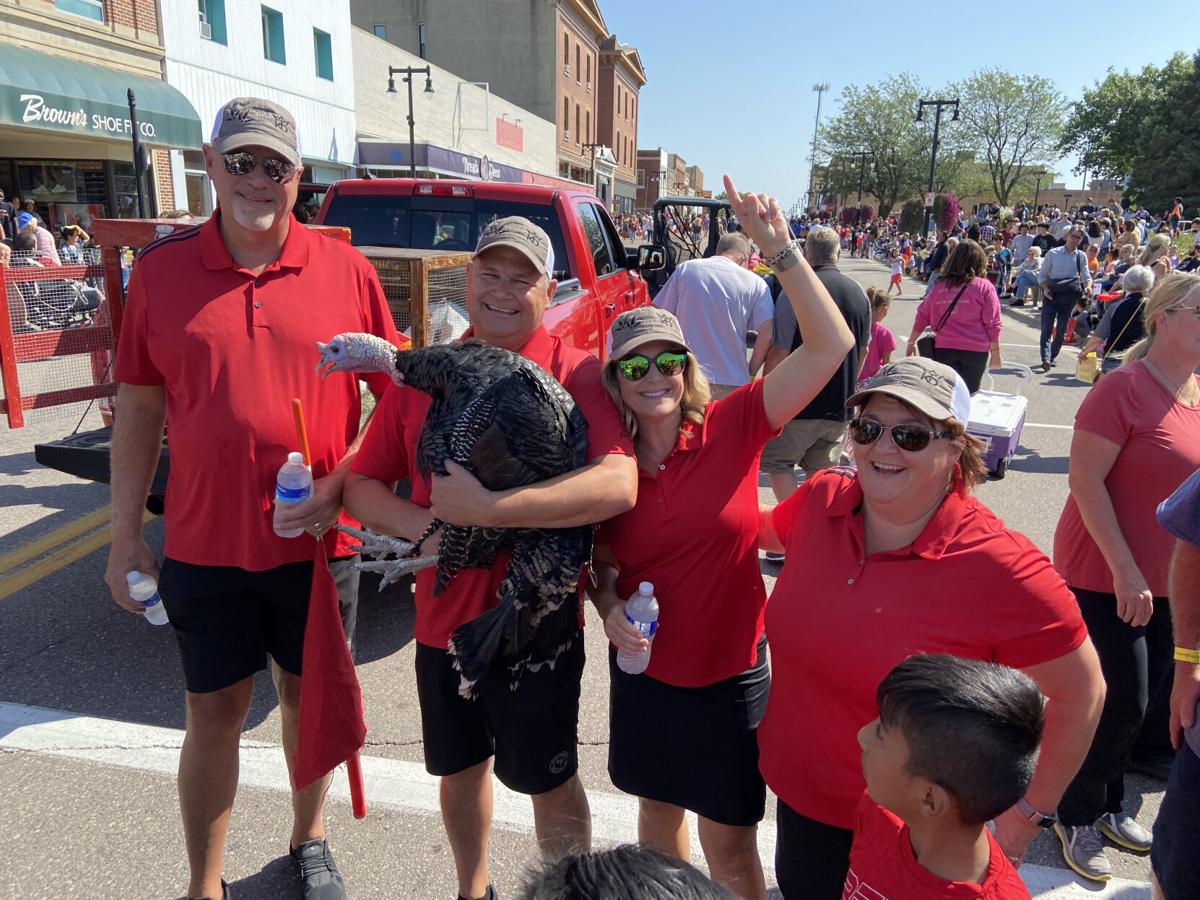 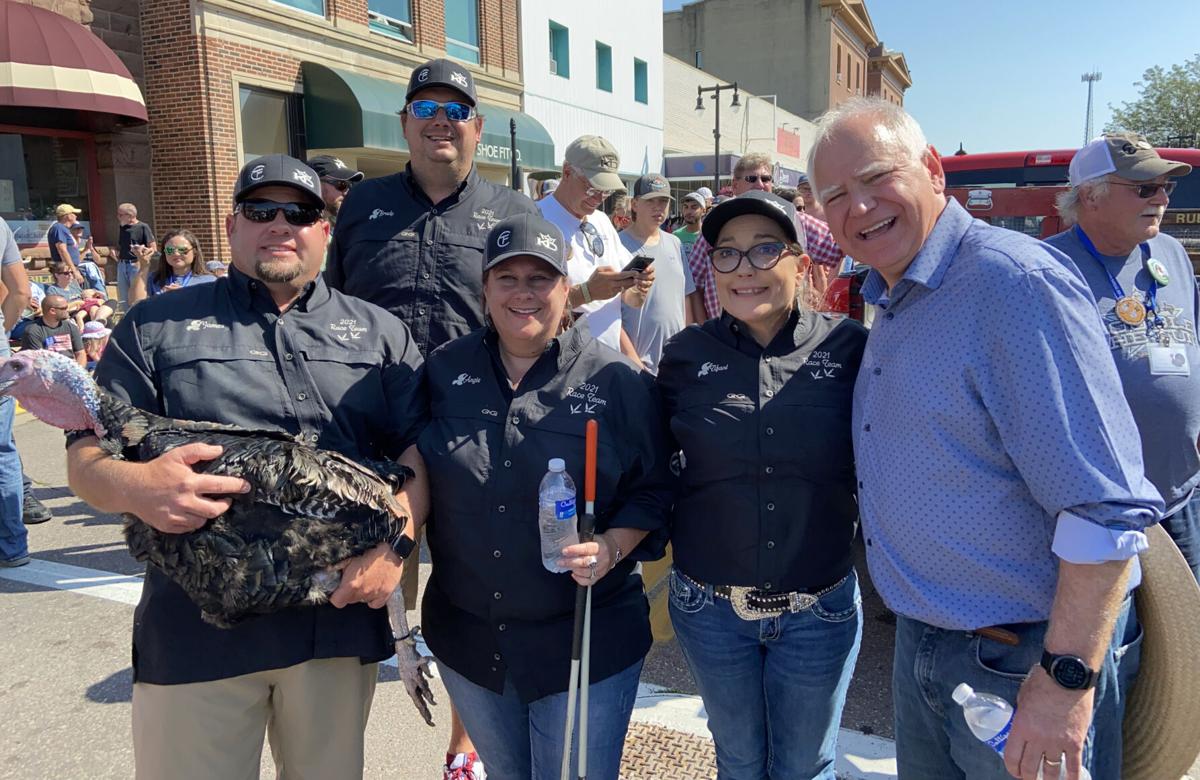 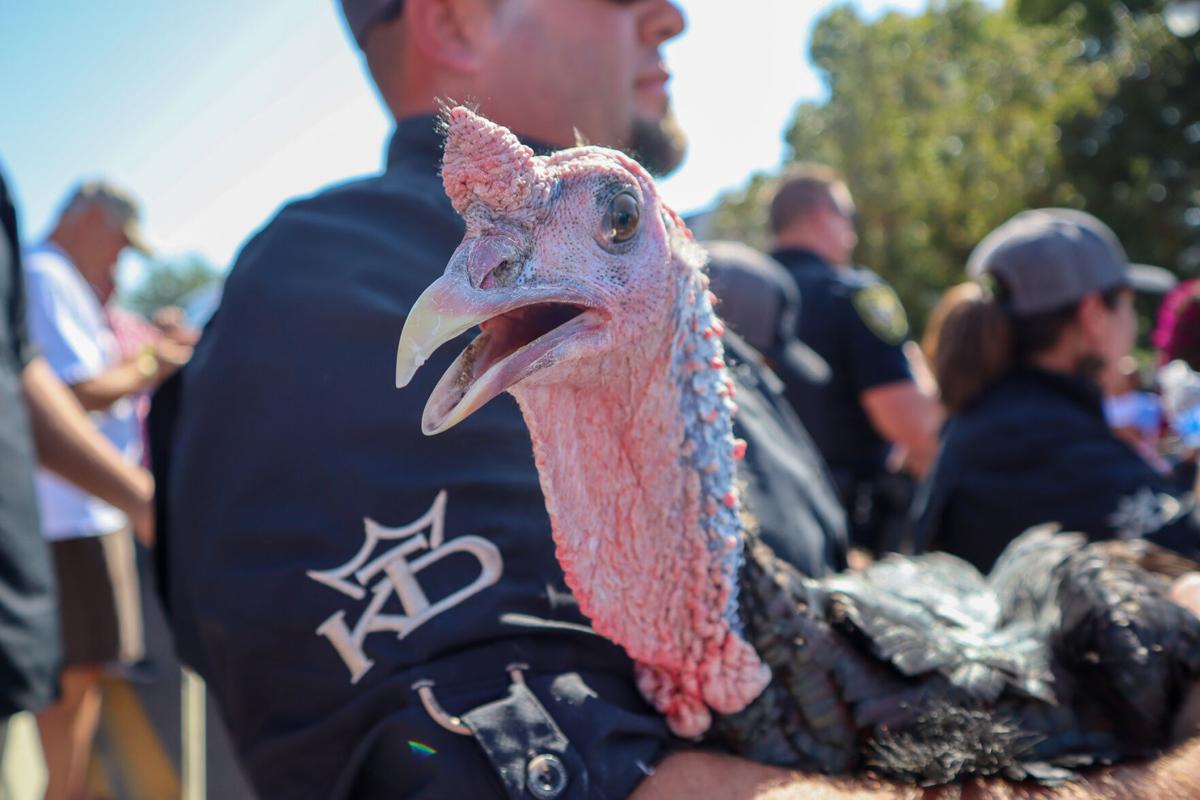 During a “test run” in Cuero in July, Ruby Begonia put up a 36.8-second finish time. 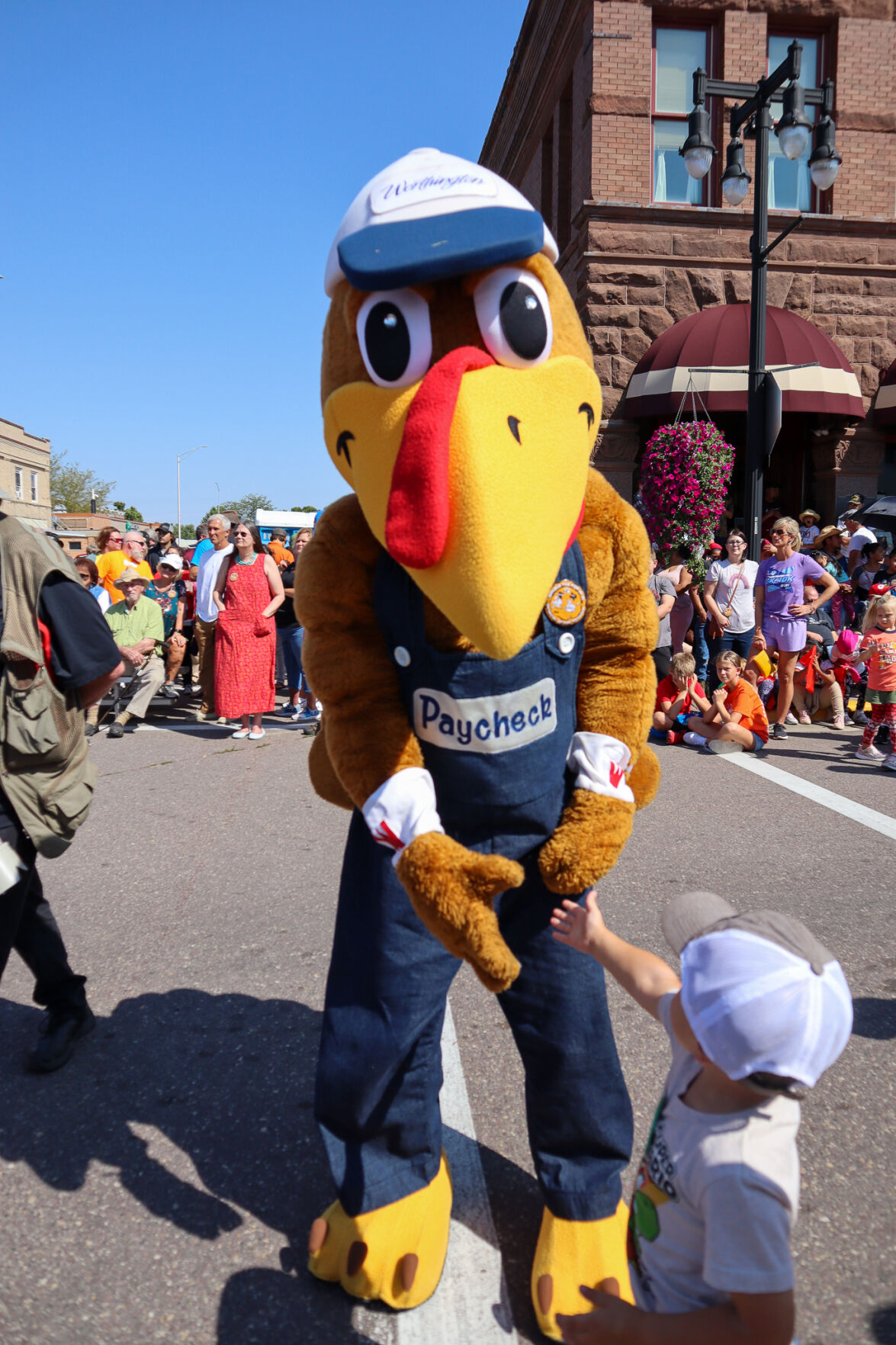 The Paycheck mascot gives five to a child during King Turkey Days in Worthington, Minn., on Saturday. 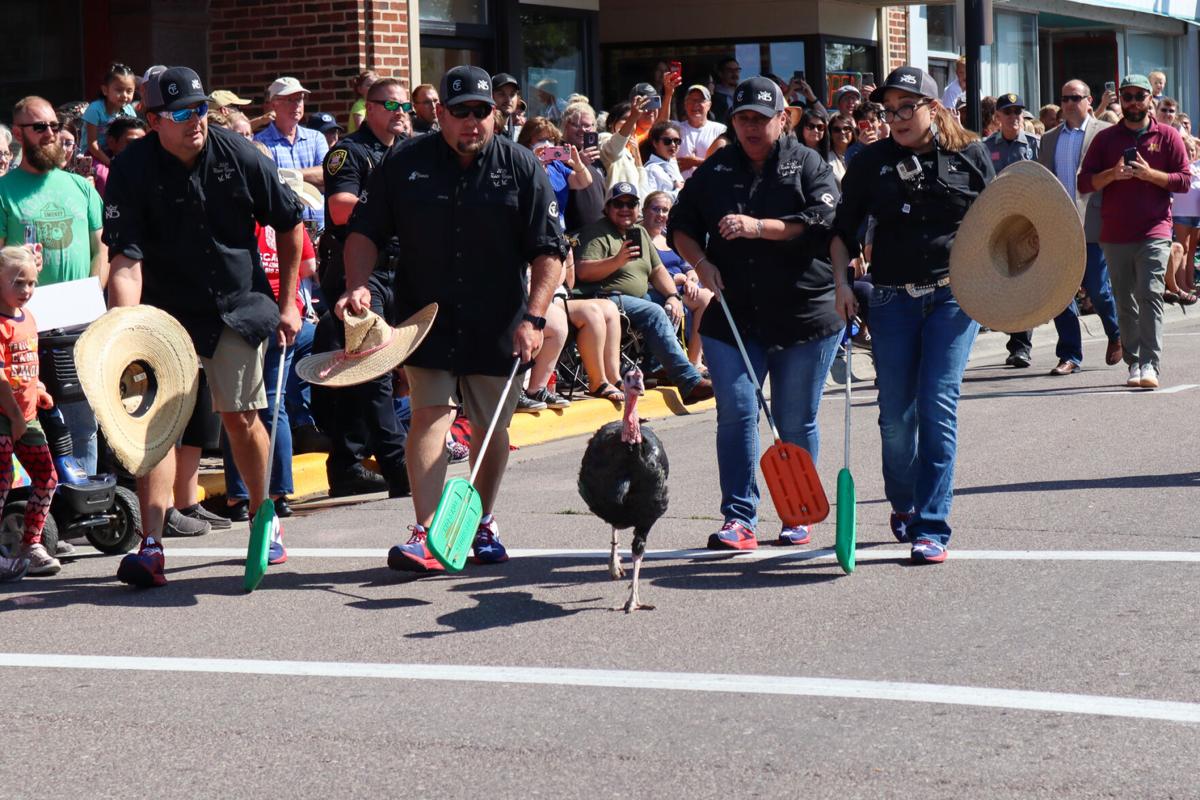 The Cuero race team and Ruby Begonia cross the finish line during the Great Gobbler Gallop in Worthington, Minn. on Saturday. 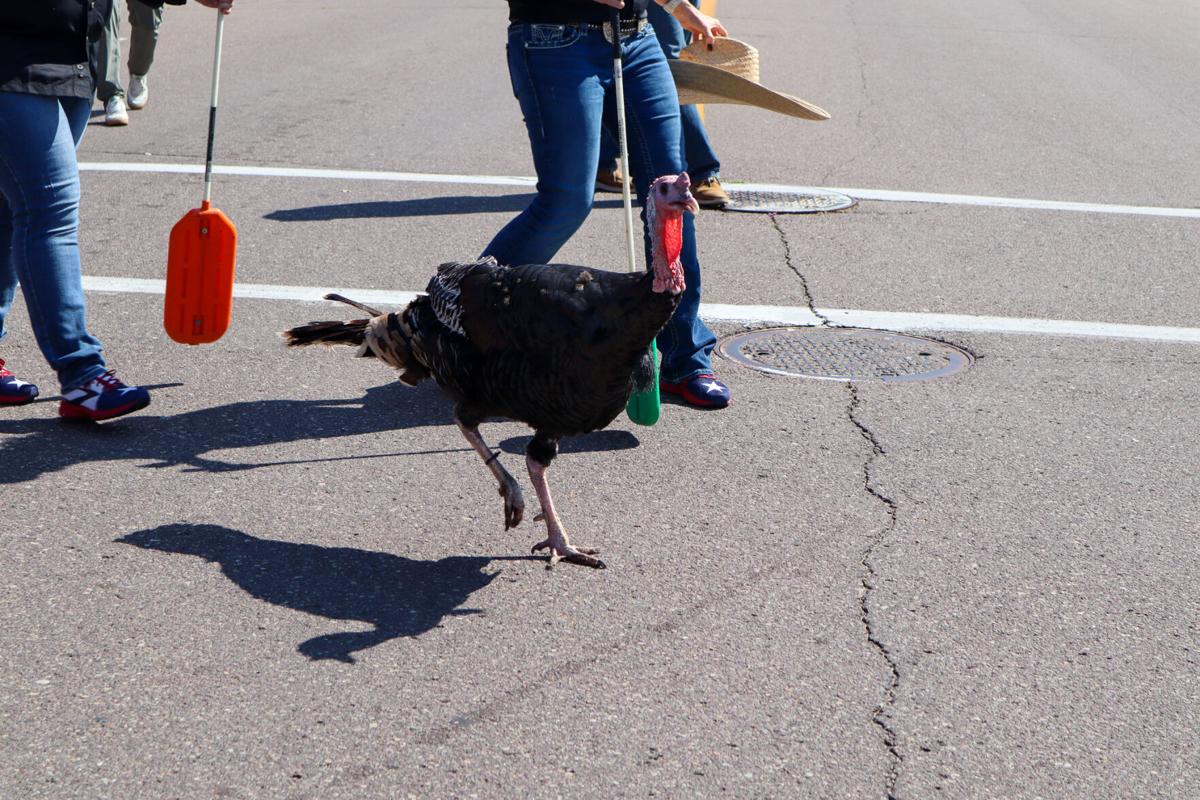 The Paycheck mascot gives five to a child during King Turkey Days in Worthington, Minn., on Saturday.

The crowd stepped back as the turkey drag race came to an exciting end, which saw the hometown bird, Paycheck, besting his Texan rival.

“We knew Paycheck was freaky fast, but that caught us off guard,” said Doug Tate, the Worthington team’s race coach. “We could barely keep up.”

In a continuation of a decades-long tradition between Cuero and Worthington, Minn., turkey watchers flocked to the Gopher State on Saturday for the first heat between the two flightless birds.

Turkeys Paycheck and Ruby Begonia, of Cuero, got off to a slow start at first, Tate said, but halfway through the race, the Worthington bird sped off to the finish, flapping its wings and skipping.

“We were doing really well, and then Paycheck came out of nowhere,” said Angie Cuellar, a Cuero race team member and executive director of the Cuero Chamber of Commerce. “He was crazy, but Ruby was calm and collected.”

Ruby Begonia kept a mostly steady pace throughout, only stopping for a moment a few feet from the finish line. After thinking a moment to “socialize” with the crowd, Cuellar said, the Cuero team coaxed the bird to finish the race.

“It was still a strong finish,” Cuellar said. “We didn’t have any penalties, and Ruby didn’t fly off into the crowd.”

In October, Cuero will host the 49th annual Turkeyfest, which will include the final leg of the race between Ruby Begonia and Paycheck. After that, the turkey with the best combined times will win the title.

Both teams are ready for the final showdown.

“We can still do well in Cuero and win this thing. We’re hopeful,” said Cuellar. “It ain’t over til’ October.”

“We’ve got a crazy bird. We’re in for more of the same in October,” he said with a laugh. “Paycheck will be ready.”

Philips is shooting a documentary about the decades-long tradition. Follow The Turkeyfest Project on Facebook for updates and more information regarding the film.

'Ruby will do the talkin': Cuero's racing turkey to meet opponent in Minnesota (w/ video)

Do you have a family member who served in the military during WWII?