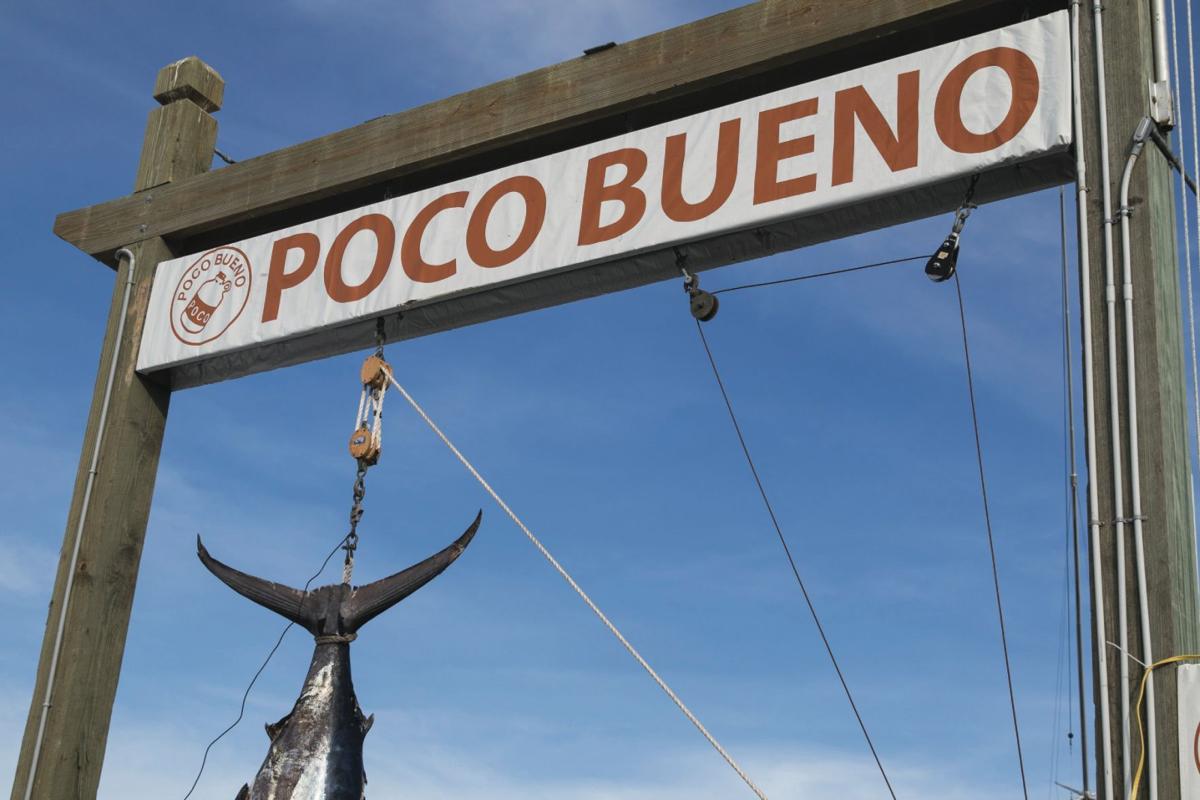 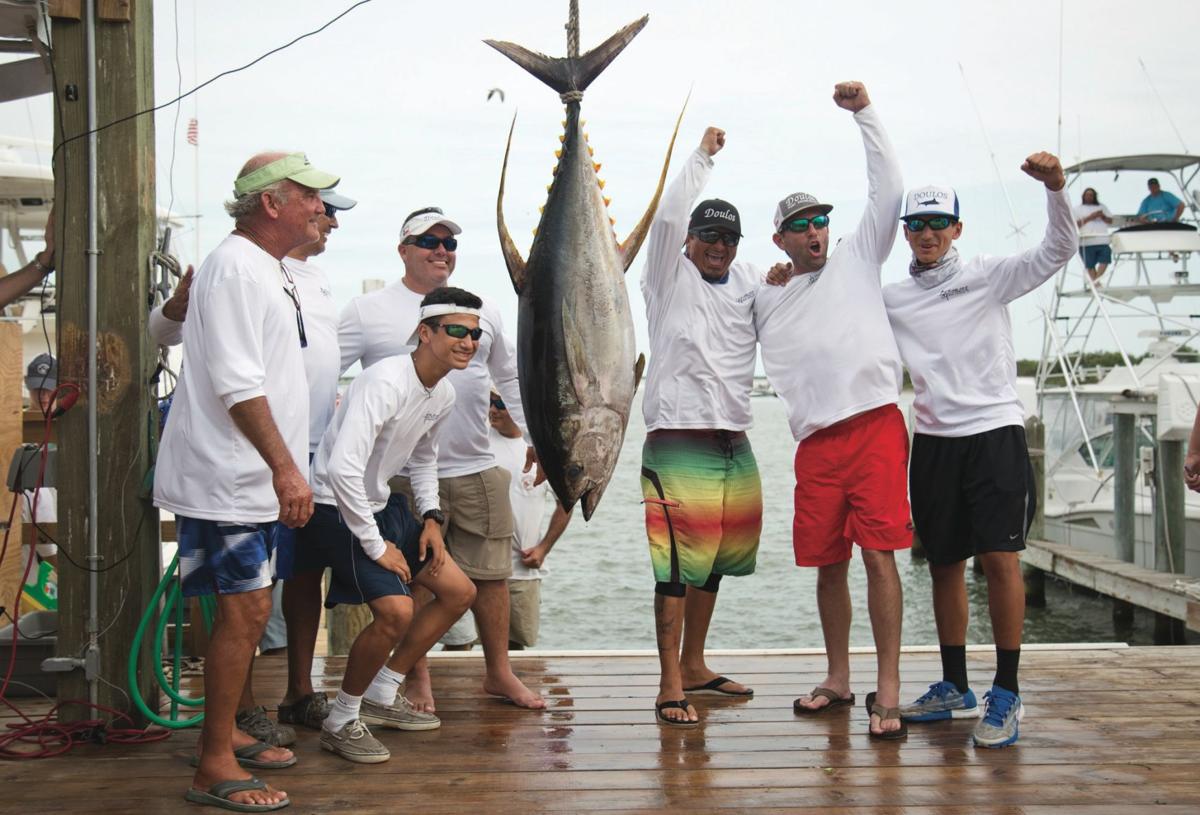 Team Doulas celebrates their win of largest tuna on the second day of Poco Bueno in 2017.

“It is indefinite at this state, (and) I don’t know what it would take to change that,” he said. “We have seen a decline in the last few years, and unfortunately with the numbers that we have for offshore this year, it just didn’t make sense for us to try and take a chance that we wouldn’t have as many boats that we had last year … so we just decided that if we’re going to cancel, it is better to do it now instead of later.”

Nine offshore boats had registered for the 2019 tournament prior to cancellation, which Fondren IV said is a little less than where they were about the same time last year. The tournament was planned for July 17-20.

All entry and Mano-y-Mano payments made by participants will be fully refunded, according to an email Fondren IV sent to registered participants about 2 p.m. Tuesday.

During the past 49 years, the tournament grew to become a sporting event known across the Gulf Coast and a major contributor to Port O’ Connor’s economy.

At its peak, 123 offshore boats participated in Poco Bueno. In 2010, the blue marlin calcutta reached $1.375 million, though the pot amounts are often not released to the public each year, making comparisons of the changing purses over the years difficult.

“The Poco has a big economic impact on our area,” said Russell Cain, of Russell Cain LLC, who sells homes and rentals in areas across Calhoun County, including Port O’ Connor. “Many, many people look forward to coming to that and schedule their vacation around that time.”

Some people would book their rentals for the tournament a year in advance to ensure they reserved a particular house, he said.

“It will have an impact on the rental market. There will be some other things that take up the slack, but there is nothing like the Poco Bueno and all the history that the Fondrens have in our area,” he said. “It is hard to replace people like that who were that interested in the sport of fishing and the respect that they have for the fishing industry – you can’t put a price on it.”

Noral McCauley, who owns POC Liquor Store and Overboard Marine, said he also expects to see a loss in liquor sales during the third weekend of July, when the tournament was annually held.

“I’m probably looking at missing out on close to $5,000 probably for that week, but I can’t compare that because we’re still going to have something going on, and it’s going to take part of that (lost revenue),” he said. “I think we’re going to be OK; I mean, we always are. Port O’Connor, when the river floods, we just kind of move around it and keep on going.”

Even though Poco Bueno has been canceled indefinitely, McCauley said could not bring himself to believe that the tournament is gone forever.

Both days of the offshore tournament were canceled in 2014 because of inclement weather, and in 1969, during the first year of the tournament, bad weather also forced a cancellation.

When the tournament was canceled in 2014, McCauley said he was left with a significant amount of liquor that he had ordered for the event.

“I think I had $15,000 of liquor, and they shut it down,” he said. “We got hung with all that liquor, but it turned out OK because the Lone Star Shootout is the following weekend.”

The Lone Star Shootout appeared to be growing in recent years while Poco Bueno was decreasing in participation, McCauley said.

The Lone Star Shootout takes place the weekend after Poco Bueno. The catch-and- release-formatted tournament moved to Port O’ Connor in 2009 after tournaments in Freeport and Galveston, where the invitational offshore tournament began in 2005.

Many of the boats that fished Poco Bueno also fished the Lone Star Shootout, said John Harper, the owner of Madden’s Lounge.

“The problem is that a lot of people didn’t fish the Poco (in recent years), so they didn’t come down a week before Lone Star,” he said.

Harper said he anticipates a loss in business because of the volume of people that came to Port O’Connor to see the Poco Bueno weigh-in.

“When there were 100 boats or so (in the tournament), I was doing great, but it has been slowing down year after year,” he said. “(Still), it’s gonna hurt because people enjoyed it and the weigh-in, watching the fish come in and all.”

The decision to cancel the tournament was “heartbreaking” for the family, Fondren said.

“It started when I was 9 years old, not just when I was younger, so that took up a good part of our summer every year for my entire life almost,” he said. “It is not an easy decision to make, and obviously we feel for the vendors and the people that we work with down in Port O’Connor that have been with us for all these years.”

Poco Bueno passes the rod to The Lone Star Shootout

PORT O’CONNOR – For residents in this coastal community, Poco Bueno was the biggest event outside the Fourth of July.