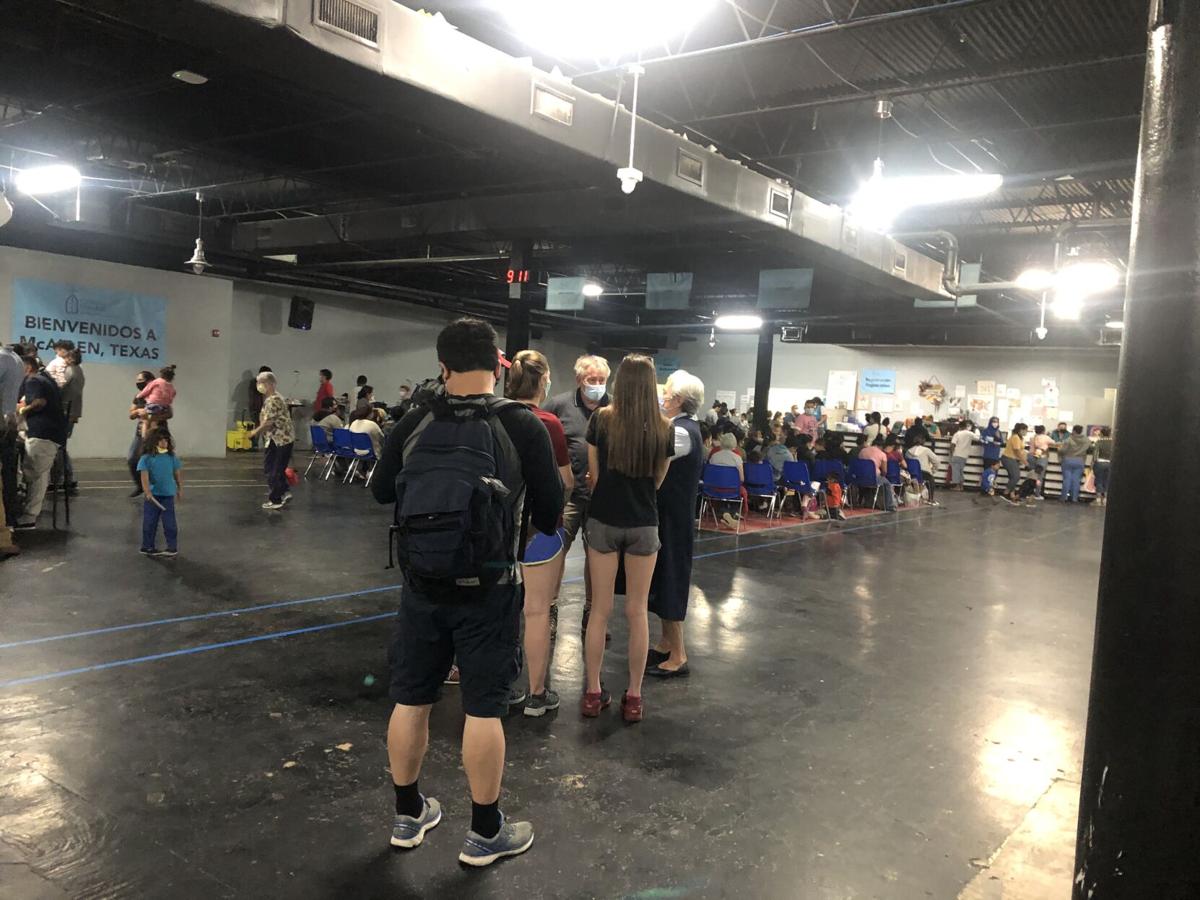 The entrance of the Catholic Charities Humanitarian Respite Center in McAllen. 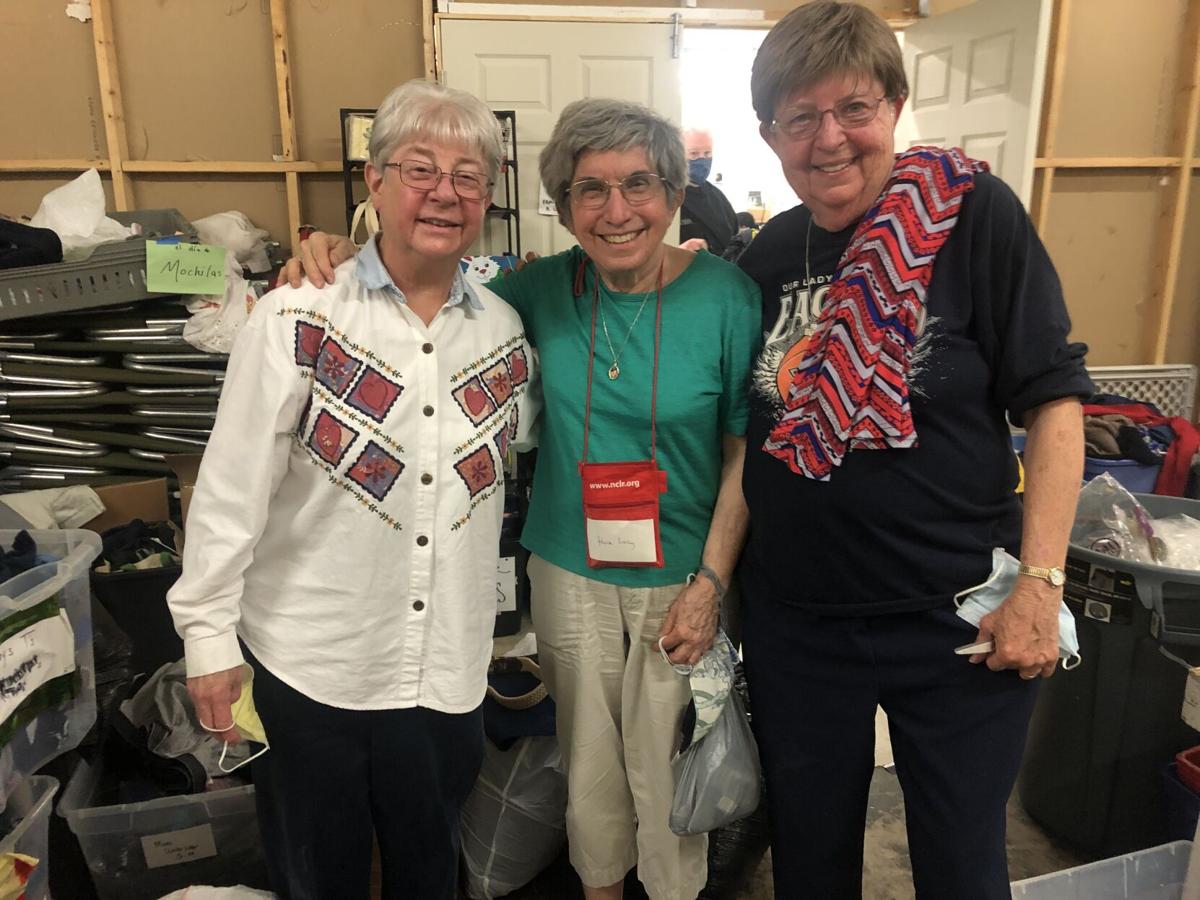 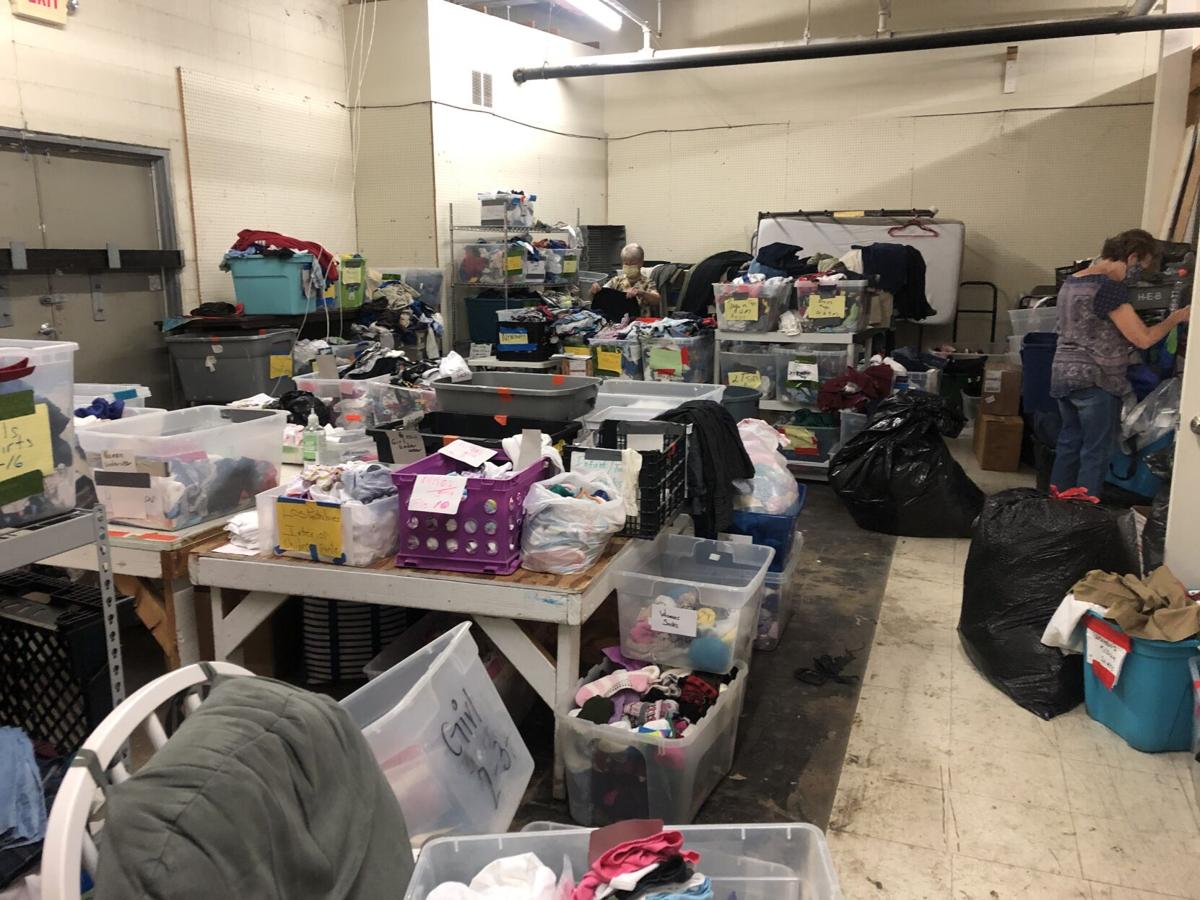 The room where Sisters Marian Sturm and Laura Toman distributed clothing to the immigrants. 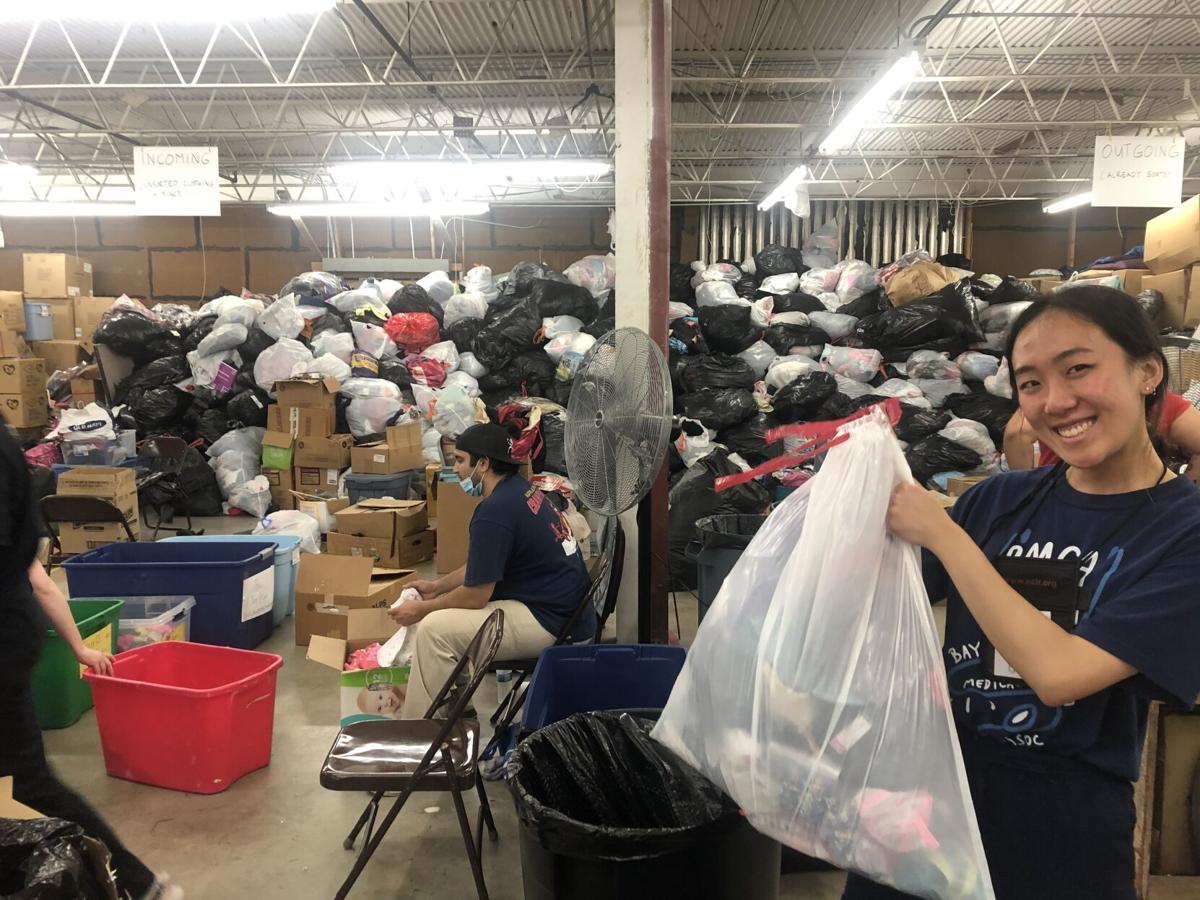 Piles of bags full of clothing that need to be sorted to give to the immigrants. 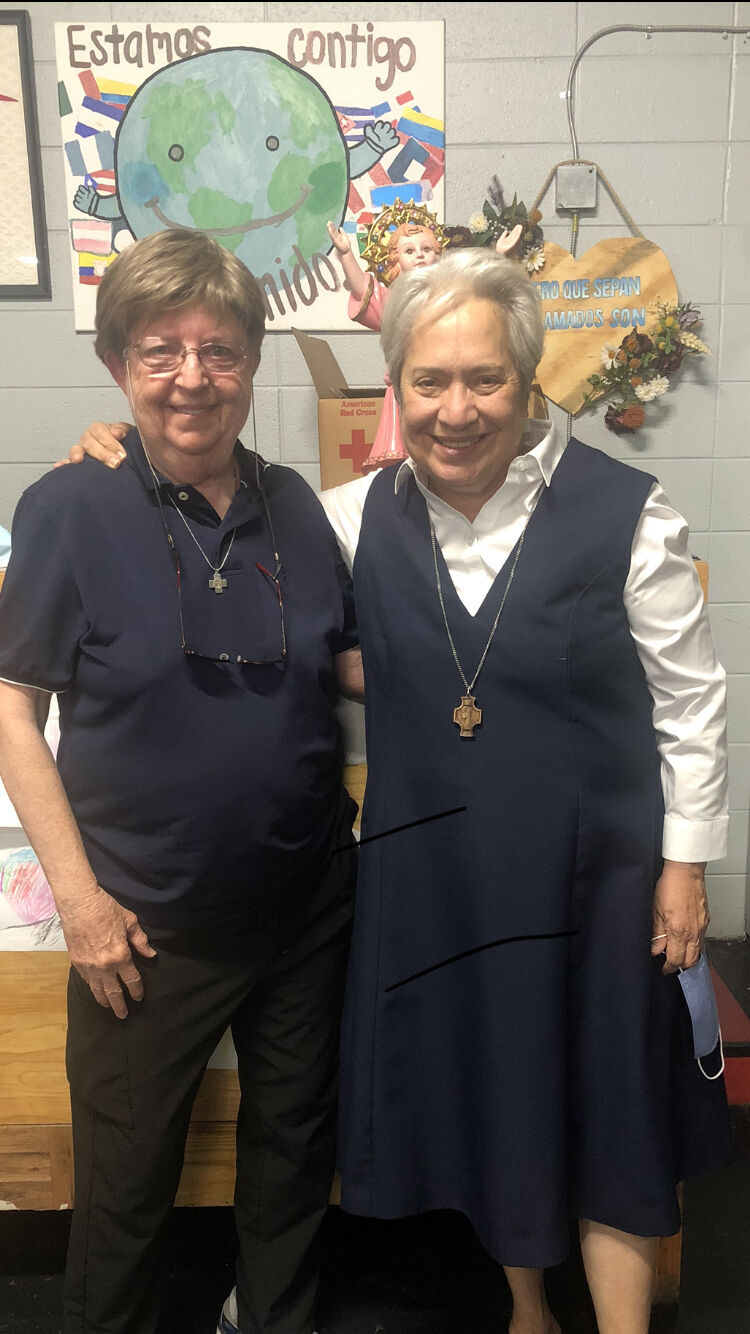 The entrance of the Catholic Charities Humanitarian Respite Center in McAllen.

The room where Sisters Marian Sturm and Laura Toman distributed clothing to the immigrants.

Piles of bags full of clothing that need to be sorted to give to the immigrants.

“Look at her feet,” said a staff member with the Catholic Charities Humanitarian Respite Center in McAllen to Sister Laura Toman.

The swollen feet of a young girl, about 11 years old, were covered in calluses.

“She’s walked miles and miles on those feet,” the staff member told Toman.

Toman said it broke her heart.

“But the young girl was tough and not feeling sorry for herself at all,” Toman continued.

Toman and Sister Marian Sturm, members of the Incarnate Word and Blessed Sacrament Convent in Victoria, traveled to volunteer at the respite center in the Texas border town May 6-20.

In 2020, Time magazine named the director of the center, Sister Norma Pimentel, one of the world’s 100 most influential people. She has also received high praise from Pope Francis for her work with immigrants.

“She’s a very simple and kind person who cares about those people,” Sturm said.

When the immigrants arrived on buses after being tested for COVID-19 at a hotel, they were given a number and a chair. The waiting room had about 200 chairs filled by young families, Sturm said. Numbers were called one by one, and staff helped the families make their travel plans to their host families located across the country. Texas, New York, Chicago and California were among the destinations for families boarding either buses or airplanes. They would leave with a brown envelope on which the staff stated they could not speak English. Inside were all the necessary documents to get them where they were going.

Once their travel plans were made, they were each given a mat and light blanket for sleeping. They were free to wander through the building and take advantage of the products and services offered to them, which included showers, clothing, food, pharmaceuticals, baby products such as diapers and formula, haircuts, television and eyeglasses. Childcare was available to the parents as well so they could take care of business. Meals included fried rice, pinto beans, potato salad, fajitas and chicken soup, among other offerings prepared by paid staff and volunteer American chefs.

Sturm and Toman helped distribute clothing to the immigrants. Each person was given three tops, three pairs of pants, three pairs of socks and three undergarments. They ran out of shoes quickly, Sturm said.

“I’m so very involved in things like this,” Sturm said of her decision to volunteer.

Sturm’s religious community asked her to join the Region 12 Social Justice Promoters Group under the auspices of the Leadership Conference of Women Religious (LCWR). The group advocates for three main issues — migration, climate change and racism.

Toman became a sister to dedicate her life to the church and people, especially children, which is why she decided to volunteer at the border. Before retiring in 2019, she was a school principal in Cuero, Selma, Floresville, Dallas, Weimar and Victoria. She now works with the homeless at Promise Pointe.

“When we got the call from LCWR, I asked, ‘Who is the Lord talking to? He’s talking to me,’” Toman said. “I have the time. I’m not bound by a school, so I’m going to go there. I love people.”

The sisters biggest problem was that they did not speak Spanish, but they managed to get the job done anyway.

“All of the children were well behaved — after all they had gone through,” Toman said.

Sturm said the families were quiet, gentle and attentive to direction. At first, they even seemed a bit fearful about what to expect.

“They sat there so meek and mild, and their kids clung to their parents,” Sturm said. “They were gracious and thankful for what they received.”

Sturm said the immigrants often are escaping desperate situations where they live — from droughts in South America and Africa to drug cartels and gangs.

“They’re coming here to save their lives and their children’s lives,” Sturm said. “America has always been a place of freedom for all people. They see that and they come here. Most of them have hardships in their lives, they are not criminals.”

Sturm said she sees the immigrants from a scriptural perspective.

“Love God above all things and love your neighbor as yourself,” she said.

She also referenced the parable of the good Samaritan as an incentive to help the immigrants.

Toman said when she returned home, she wondered about the inequalities and unfairness in all human existence.

Privilege depends on where one is born, she said. She compared those born in the United States with all the privileges and conveniences to the immigrants born into dire poverty and danger with few or no opportunities for health care, jobs, education and safety.

“Life is not fair, and we saw that firsthand in McAllen,” Toman said. “Scripture calls us to help the poor, the immigrants who have such remarkable courage to seek and hopefully find safety, peace and opportunity in our country where we just happened to be born and have so many blessings that the church and Christ call us to share.”

Sturm has some ideas for how to solve the immigration problem.

A shortage in legal help and judges makes the immigration process slower and more difficult, and the situation should be remedied, she said.

Another part of the solution, she said, is to enlist more faith-based communities like Catholic Charities to work with the incoming immigrants. The religious groups also can serve a purpose in foreign countries where they can help improve people’s lives so they can remain there.

“We need to change harmful policies so it’s easier for them to move in the direction of citizenship,” Sturm said. “I watched a seminar of the Center for Migration Studies that talked about organizing the whole area of immigration with a view of citizenship, so they can help move these people in that direction immediately once they come over. It doesn’t mean everyone is going to be accepted as a citizen, but they’re looking at making it easier.”

Sturm said there is a lot of space in the United States, and the situation at the border is not a crisis.

“When I look at what Catholic Charities does and what other religious groups do, it’s not a crisis. They are handling it,” Sturm said. “If you don’t do anything about it, it’s a crisis. But once you get your hands into it and start working with it, it’s not a crisis anymore. You take care of it.”

Catholic Charities has reached out to immigrants and helped them, thereby giving a welcoming face to the United States, Sturm said.

“I feel my presence there was a way to contribute to that welcoming, hospitable presence, so they can see Christ is present in the world here in the United States,” Sturm said. “God works through us in many ways. When people are kind and charitable and helpful to others, in most instances, people see that as God’s presence.”

Will you vote early or day of in Victoria’s July 3 special election?