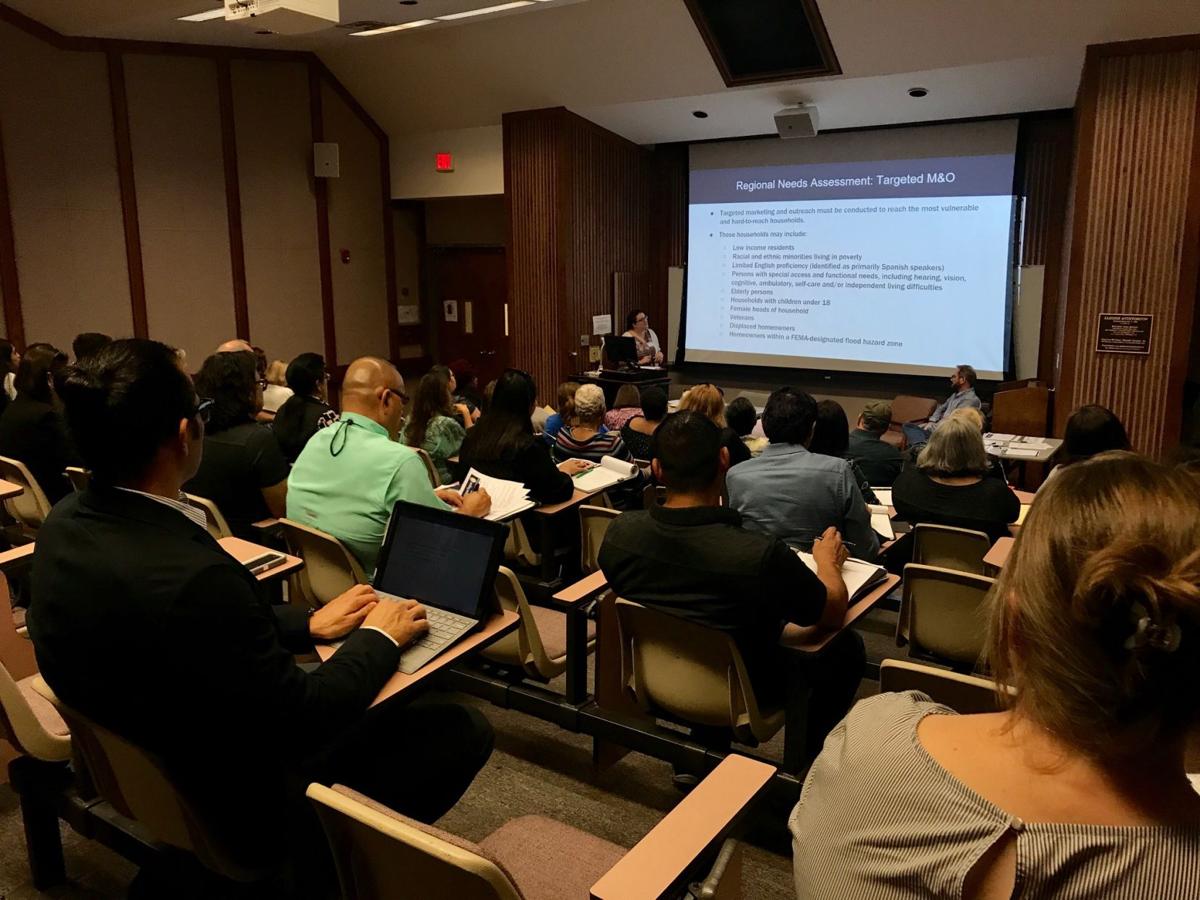 Disaster recovery workers listen to a presentation about the Texas General Land Office’s Homeowner Assistance Program, which will provide $116,828,970 in home repairs to Victoria and 18 other counties. 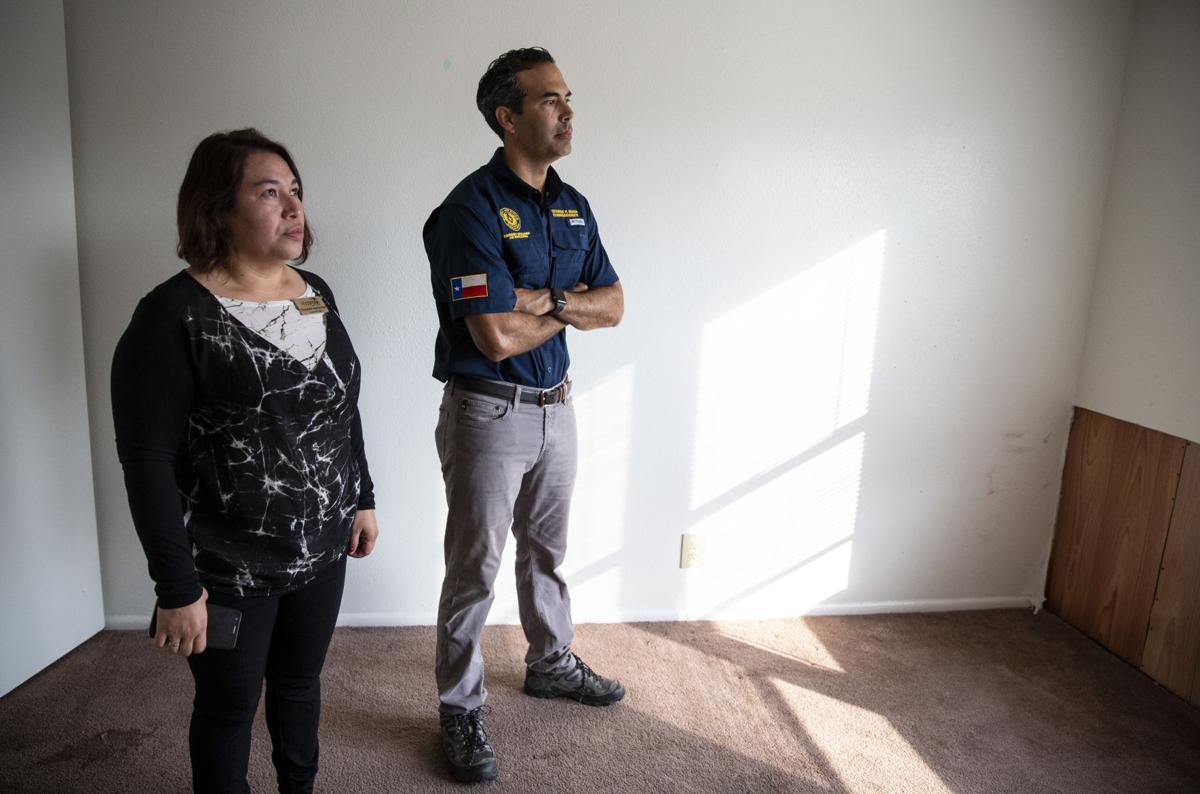 Some relief is on the horizon for homeowners still rebuilding after Hurricane Harvey.

Nearly $117 million has been allocated for the region to aid with rehabilitation and reconstruction of homes with the vast majority of the funds reserved for families with low to moderate income.

The Texas General Land Office met with about 50 people involved with disaster recovery Tuesday morning at the University of Houston-Victoria to discuss its Homeowner Assistance Program, which is expected to accept applications in late November.

The GLO is hoping that local agencies, case managers and long-term recovery groups will help the community take advantage of the program funded by the U.S. Department of Housing and Urban Development.

“I think from what we heard today, it’s going to be workable,” said Cynthia Staley, president of Golden Crescent Habitat for Humanity. “We’ll have to see how it plays out.”

Staley’s nonprofit has already repaired 88 damaged homes since the Aug. 25, 2017 storm in collaboration with the Victoria County Long-Term Recovery Group. She’s also secretary of the group dedicated to helping residents in the county recover from Harvey.

Habitat anticipates working on at least another 100 area homes in 2019.

Treasurer Dolly Stokes, who also attended the meeting, said they are cautiously optimistic and hope the partnership with the state will help them reach the most people in need.

She added that the provider of the GLO program in this region, GrantWorks, has a good reputation.

The presentation led by Eileen Manes, of GrantWorks, detailed the criteria for the Homeowner Assistance Program. A checklist is available online at recovery.texas.gov. 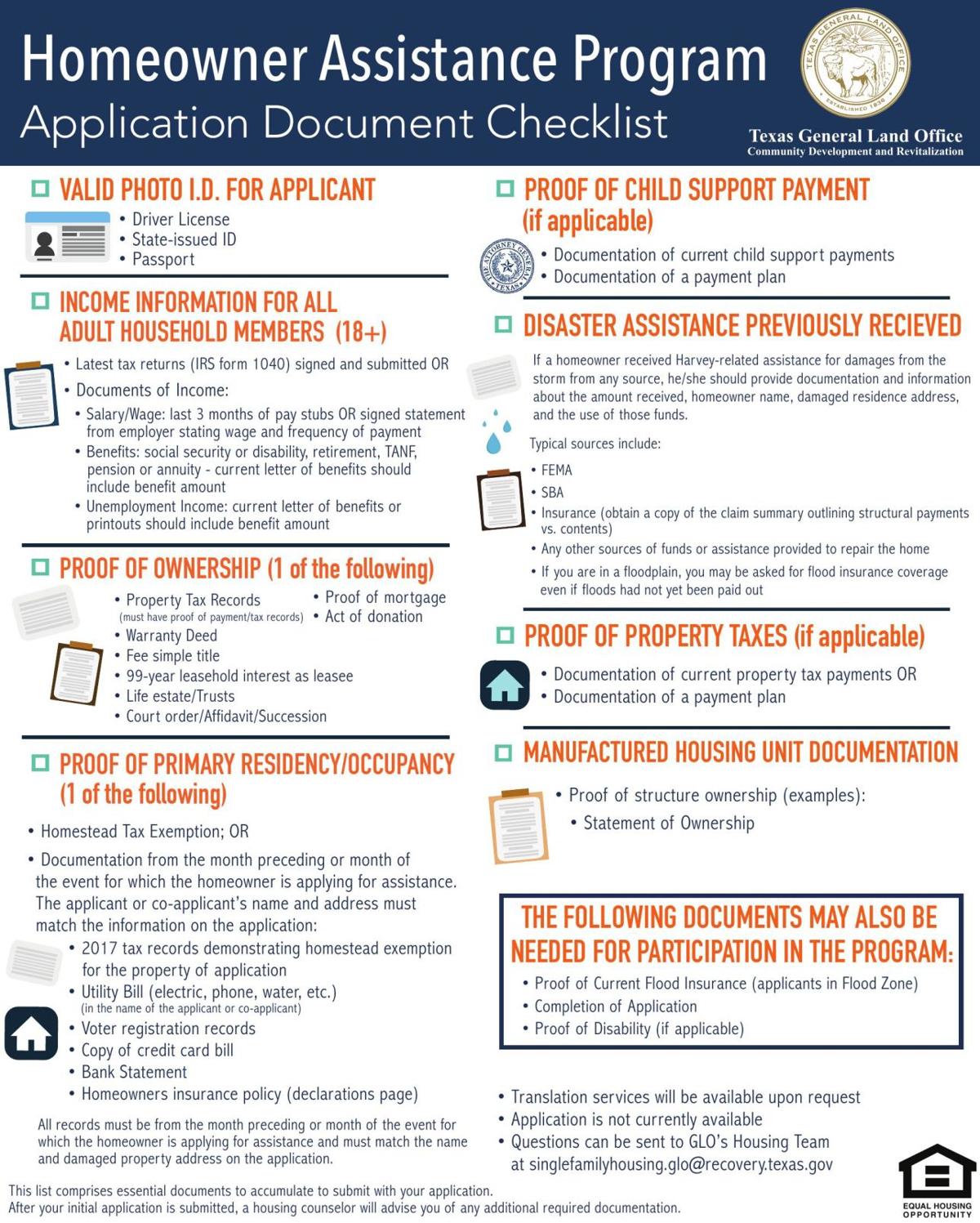 State officials are urging homeowners to start preparing their paperwork now because the funds are first-come, first-served. Unlike FEMA, which is tasked with temporary relief, this program will help homeowners fully recover.

Applicants will either qualify for rehabilitation up to $65,000 or be eligible for reconstruction. The new home will be based on the family’s needs, meaning it could be smaller than the home destroyed by the storm. The new homes will be more energy-efficient.

The applicants will enter into a three-year promissory note requiring them to maintain the home as their primary residence, make timely hazard insurance and property tax payments and not obtain a cash-out refinance on the home.

The work will be started within 45 days of approval by a state-certified contractor. The homeowner will need to relocate for 90 to 120 days during the construction process.

“We’re trying to make this as quick as possible for the homeowners,” Manes said.

Manes said a local office would soon open in Victoria and that the agency would do everything from canvassing door-to-door to promoting the program on local media sources. Intake sessions likely wouldn’t be scheduled until after the holidays.

Victoria County Commissioner Danny Garcia said he’s still getting calls from his constituents in Precinct 1, which includes the tiny town of Bloomington.

He attended the meeting so he will know the programs that are available and where to send residents for assistance.

Garcia and others asked about whether the money would remain in the area or if any unspent HUD funds would be allocated elsewhere.

Brittany Eck, director of communications for community development and revitalization for the GLO, said in an interview Tuesday afternoon that there is unlikely to be any funding left over after the Homeowner Assistance Program, but if there is, the funds would remain in the assigned region.

Garcia said he feels good about the communication level from the state.

While the program won’t be able to help everyone, such as renters or undocumented people, he said the Homeowner Assistance Program looks promising.

Dial 211 or contact the Victoria County Long Term Recovery Group office at 361-703-5567 to find out how to apply for assistance related to Hurricane Harvey. Donors can also call the office to arrange for donations of materials and labor.

There is a federally-funded program designed to help survivors with homes damaged by Hurricane Harvey at recovery.Texas.gov.

The funding is limited, and 70 percent is designated for families with low-to-moderate income. If accepted, the homeowner gets assistance with reconstruction and bringing their home up to code compliance. Some homes may need to be replaced. The Texas General Land Office hopes to start accepting homeowners after Thanksgiving.

More than 322 local families have been helped with more than $1.2 million in assistance through the Victoria County Long-Term Recovery Group.