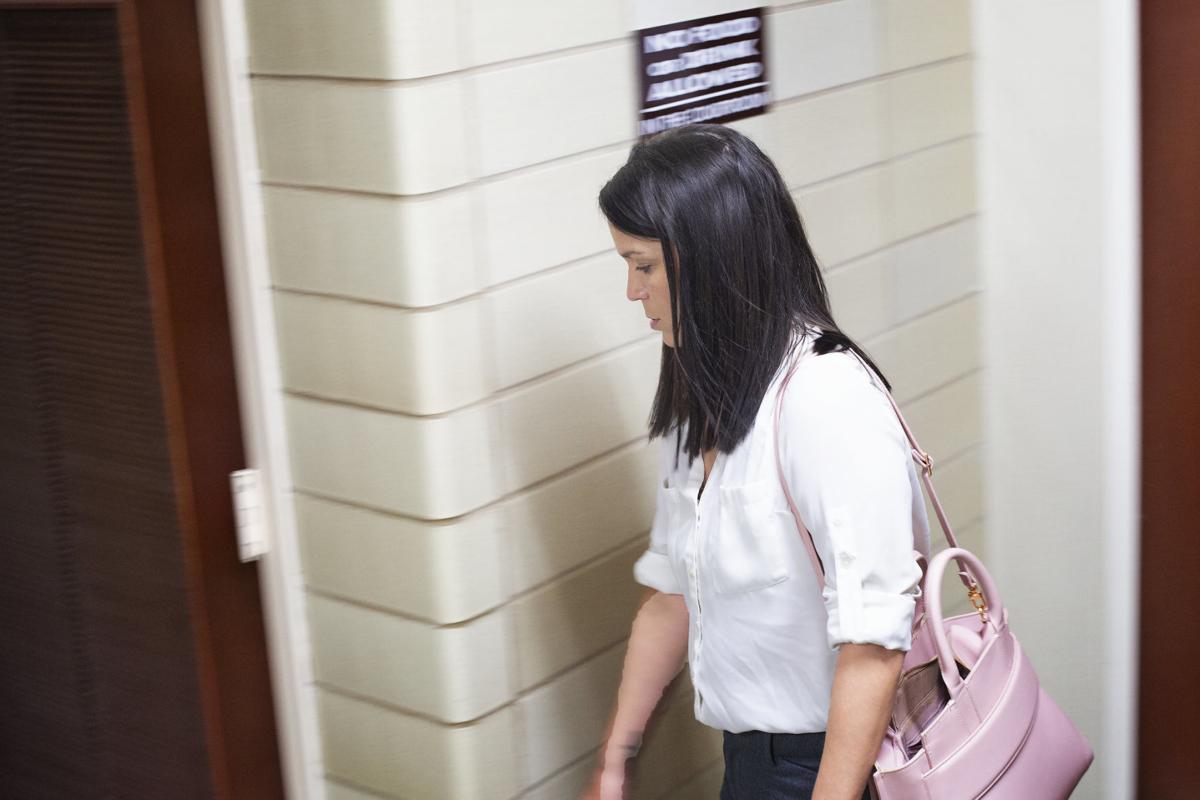 Amber Sorensen walks into the courtroom following the lunch recess. Sorensen, 37, is on trial for the shooting death of her boyfriend, Jarrett Parker. 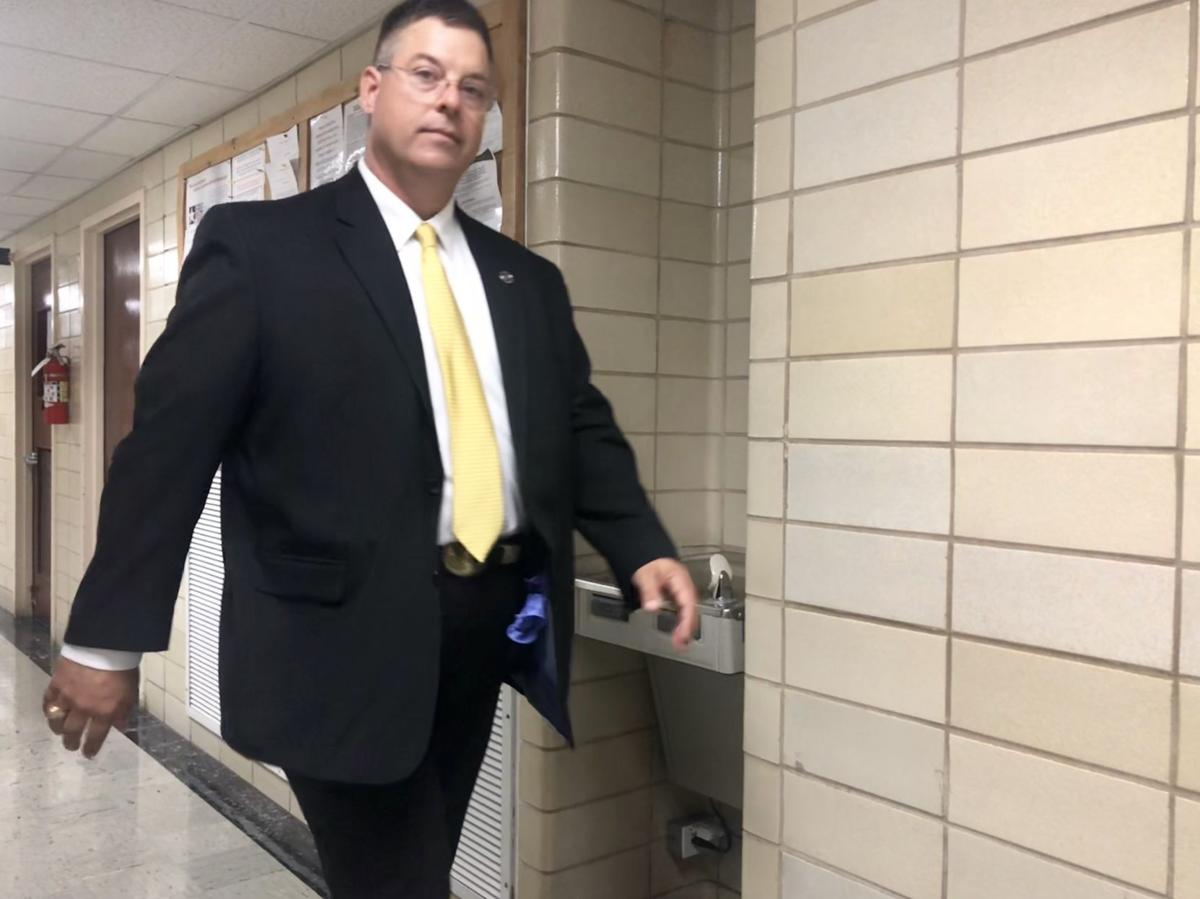 Texas Ranger Drew Pilkington walks into a Jackson County courtroom to continue testimony about forensic analysis and testing in the murder trial of Amber Sorensen.

Amber Sorensen walks into the courtroom following the lunch recess. Sorensen, 37, is on trial for the shooting death of her boyfriend, Jarrett Parker.

Texas Ranger Drew Pilkington walks into a Jackson County courtroom to continue testimony about forensic analysis and testing in the murder trial of Amber Sorensen.

Jarrett Parker was doing situps when his girlfriend shot and killed him, a Texas Ranger testified Thursday.

That testimony contradicted the version of events by defendant Amber Sorensen, who said she had shot Parker while he was standing in the bedroom of their Edna home. Sorensen told investigators that she had killed Parker, 33, in self-defense after he had assaulted her and threatened her life on Feb. 7, 2017.

“That was not possible with the injuries he received,” said Texas Ranger Drew Pilkington to jurors.

For hours Thursday, Pilkington led jurors through the conclusions of his forensic testing and analysis, which examined the likelihood of Sorensen’s version of events.

More than 60 people attended the trial on its ninth day.

Sorensen, who was intoxicated on the night of Parker’s death, had told investigators that she had shot Parker after he beat her, threw her to the ground, dragged her by the hair and held a gun to her head.

She said she shot Parker after gaining control of the .40-caliber semi-automatic pistol by knocking it out of his hand.

Previous testimony showed Parker did not refute text messages made by Sorensen in which she said he had beaten her.

“I’m not taking your verbal abuse just because you stopped hitting me,” one such message reads.

Thursday, Parker’s mother, father and stepfather disputed the allegation, saying they had never witnessed anything to cause them to suspect their son was abusive.

They instead testified about a New Year’s Eve incident in which they said Sorensen had lied to them about being abused.

Sorensen’s first cousin, the only defense witness to be called so far, said he saw bruises on her arms at two holiday parties in 2016.

When asked about them, Sorensen said they were from working out, he said.

“Is this scenario confirmed or rebuffed?” said Tyler of Sorensen’s narrative.

“It was disproved,” said Pilkington.

Tyler is serving as a Jackson County assistant district attorney in the case.

Prosecutors displayed photographs of Parker’s blood-spattered body to jurors, pointing out how his feet were under their bed’s frame. Pilkington noted the positioning of Parker’s feet as unlikely for a person standing.

Lying on his back, Parker’s arms were raised above his head, and his legs were bent.

During the repeated projection of those photos on courtroom screens and televisions, some of Parker’s loved ones cried. Others comforted them silently.

Pilkington said he himself has performed situps and crunches by placing his feet under his bed.

“What really stuck out to me was his body position,” Pilkington said.

According to differing statements made by Sorensen to investigators and grand jurors, she was kneeling on the master bed when she pulled the trigger. Parker was standing at various distances away when he was shot, which the ranger tested.

None of the distances offered by Sorensen in her statements to police and grand jurors, the ranger said, matched the fatal bullet’s trajectory.

According to medical examiners, the bullet pierced his chest at a 45-degree angle and punctured his aorta, a vital artery connected to the heart.

Jurors viewed a variety of diagrams with trigonometric calculations made by Pilkington that he said proved his point.

But Sorensen’s attorney, Stephen Cihal, pointed out that the height taken from Parker’s driver’s license and used by the ranger differed by two inches with measurements taken by medical examiners.

Other theories that included Parker standing and leaning forward, the Ranger said, were possible but not probable, considering his other evidence and analysis.

The ranger said patterns left by Parker’s blood on the wall and bathroom door jamb indicated his gunshot wound was about a foot off the ground when it began bleeding.

District Judge Bobby Bell approved Pilkington as a blood-spatter expert for the trial, but Cihal pointed out the ranger had not passed the most advance levels of his ranger certification.

Two other rangers in the state have completed those advanced levels, Pilkington said.

Pilkington also conducted tests on the pistol that killed Parker by measuring the trajectories of unfired bullets and spent shell casings ejected from the gun.

He said those trajectories placed Sorensen on the bed, but Cihal questioned him about whether the ranger had sufficiently replicated the bedroom at the gun range where the tests occurred.

Pilkington said the bullet and shell casing could have struck the bedroom’s ceiling and furniture.

To test Sorensen’s statements that Parker wielded the gun, the ranger painted a pair of deer skin gloves, which he then handled the pistol. The test’s aim was to determine whether dry paint would have rubbed off onto the weapon’s hard, course grip.

Investigators found white paint on Parker’s hands after they photographed his body. They found no paint on the pistol’s grip.

Because the deerskin gloves, which mimic human skin, Pilkington said, left paint behind on the test pistol, the ranger determined Sorensen’s claim unlikely.

Cihal questioned the effectiveness of that testing and asked whether the paint on Parker’s hands was wet or dry at the time of his death.

Pilkington said he did not know.

Although the ranger said his work may have left some unaccounted variables, he ultimately concluded the situp theory was the most likely to have happened.

“What scenario best fits the physical evidence in this case?” Tyler asked.

“Mr. Parker was on the ground ... doing situps or crunches,” Pilkington said.

WHAT: Day 10 of the Amber Sorensen trial

EDNA – A slain Edna man was not a perpetrator, but rather, the victim of abuse, his parents testified Wednesday.