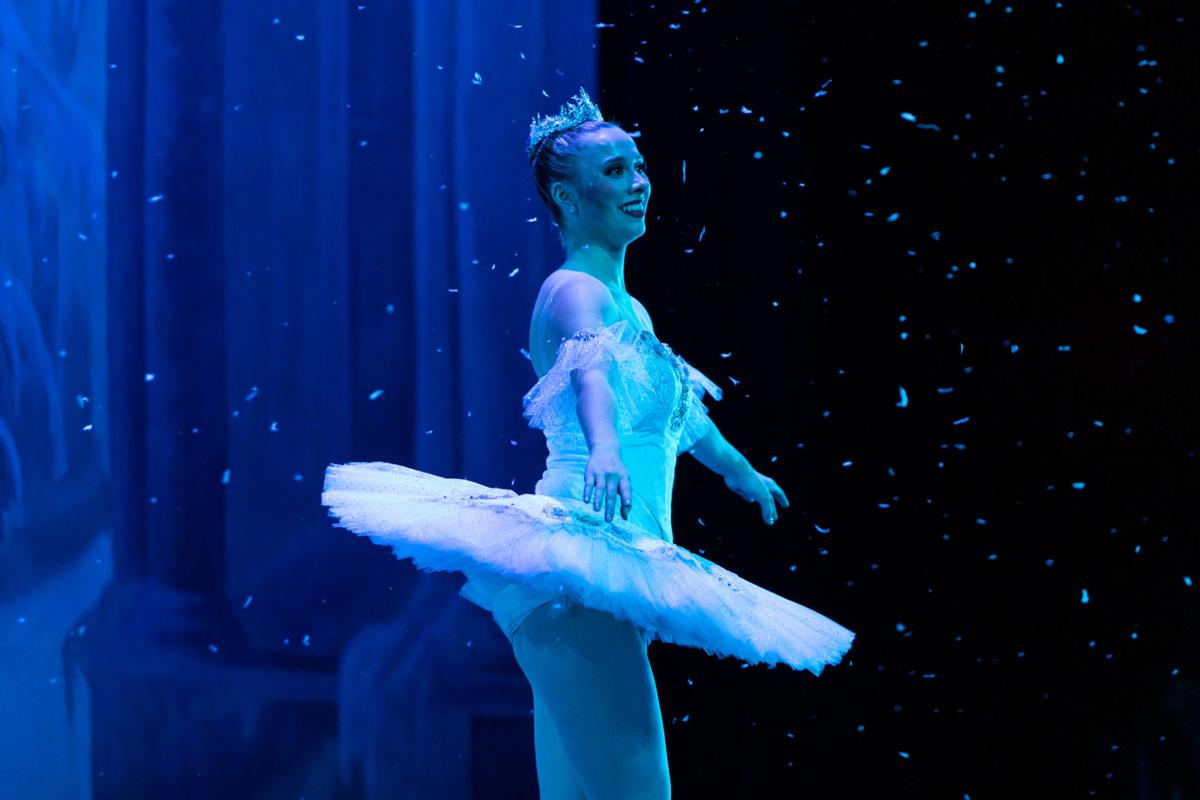 Madison High, 17, portraying the Snow Queen, dances on stage during the performance of "The Nutcracker" for students at the Leo J. Welder Center for the Performing Arts. 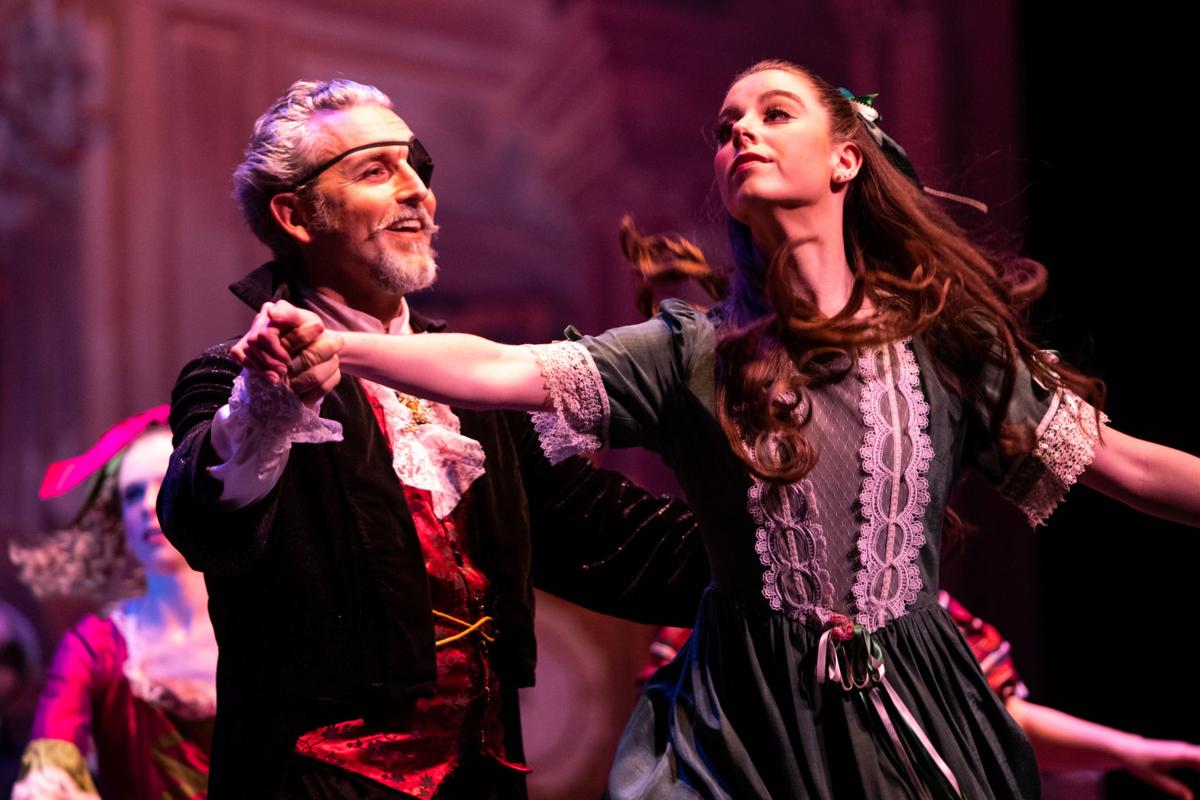 Clara, portrayed by Melbourne Motl, dances on stage with her Uncle Drosselmeyer, portrayed by William Tally, during one of the student performances of "The Nutcracker" at the Leo J. Welder Center for the Performing Arts. 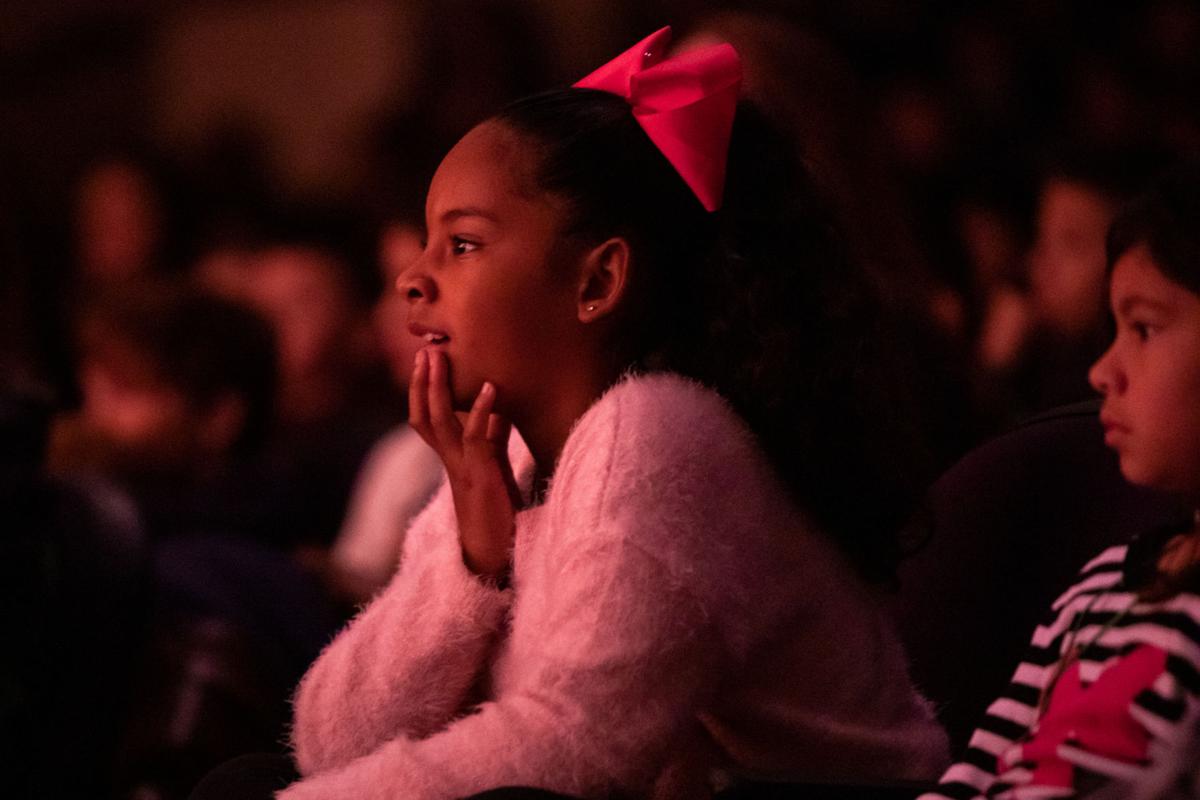 Aliyah Cervantes, 8, watches the dancers with awe from the front row during one of the student performances of "The Nutcracker" at the Leo J. Welder Center for the Performing Arts. 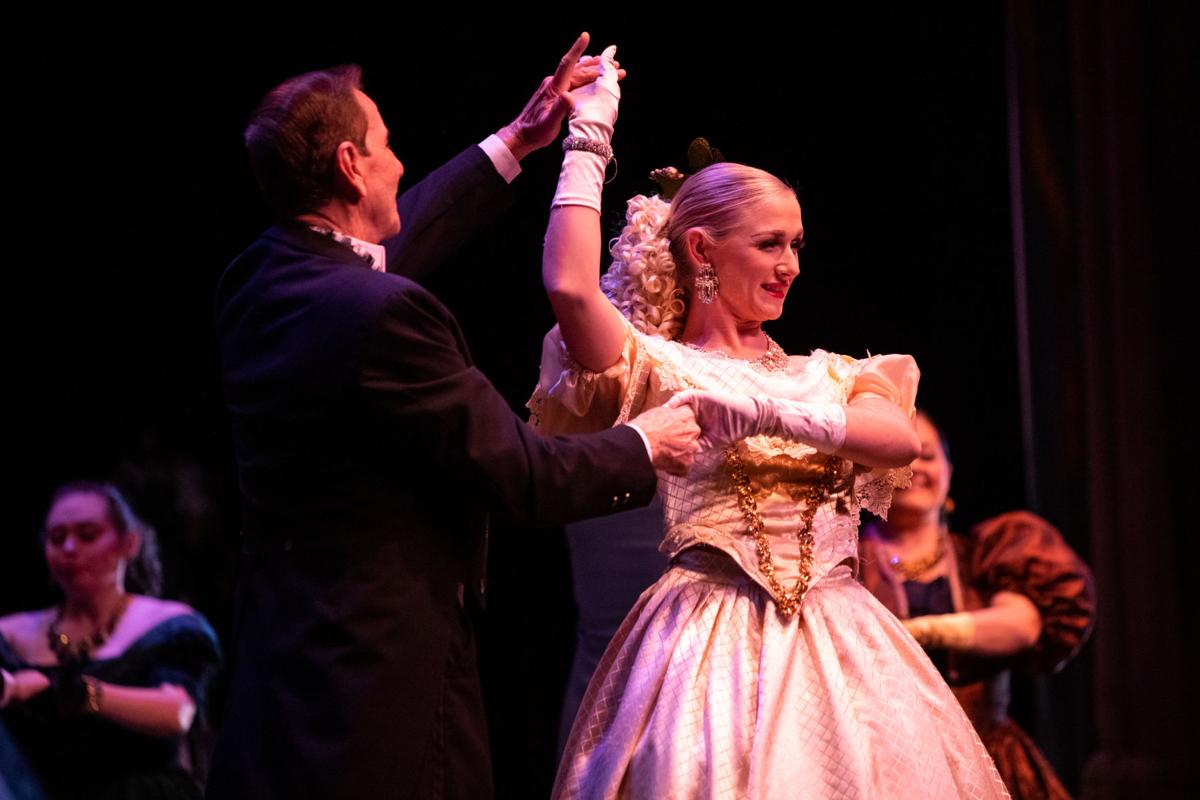 Caitlin Hoeft, who portrays Clara's mother, dances on stage during Act I of "The Nutcracker" for one of the student performances at the Leo J. Welder Center for the Performing Arts. 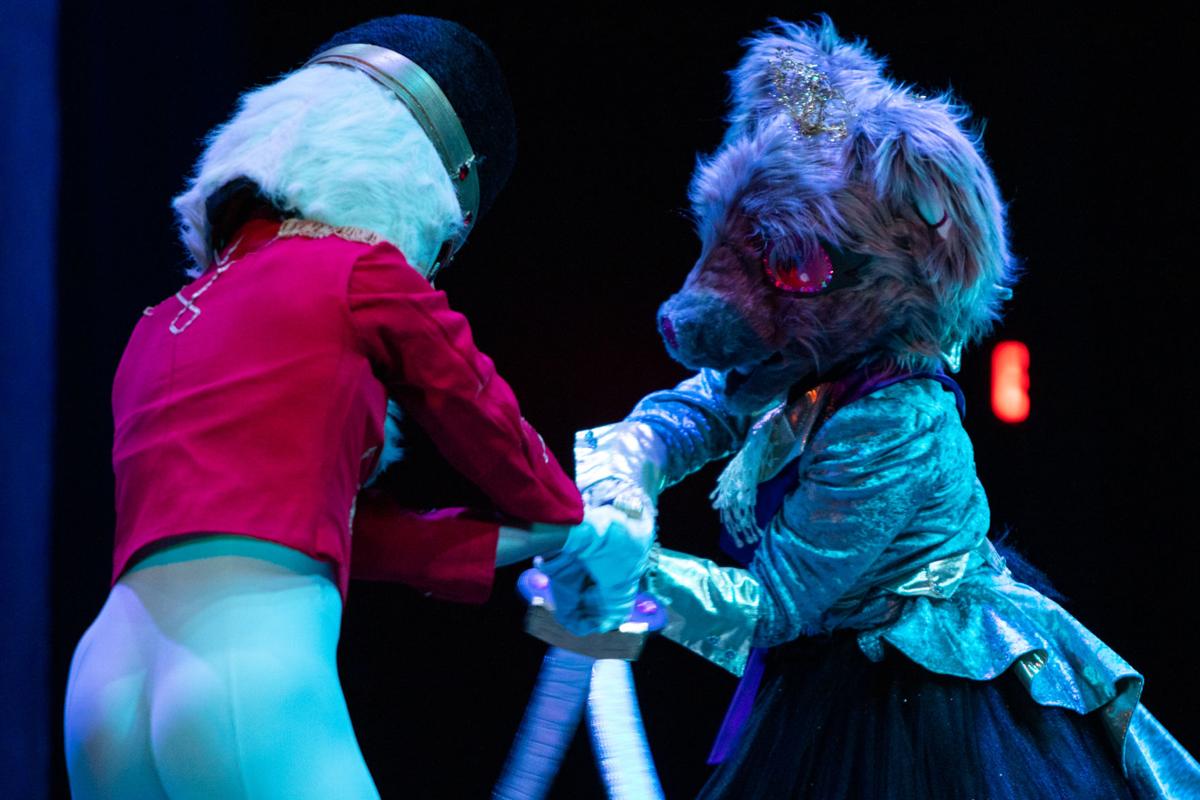 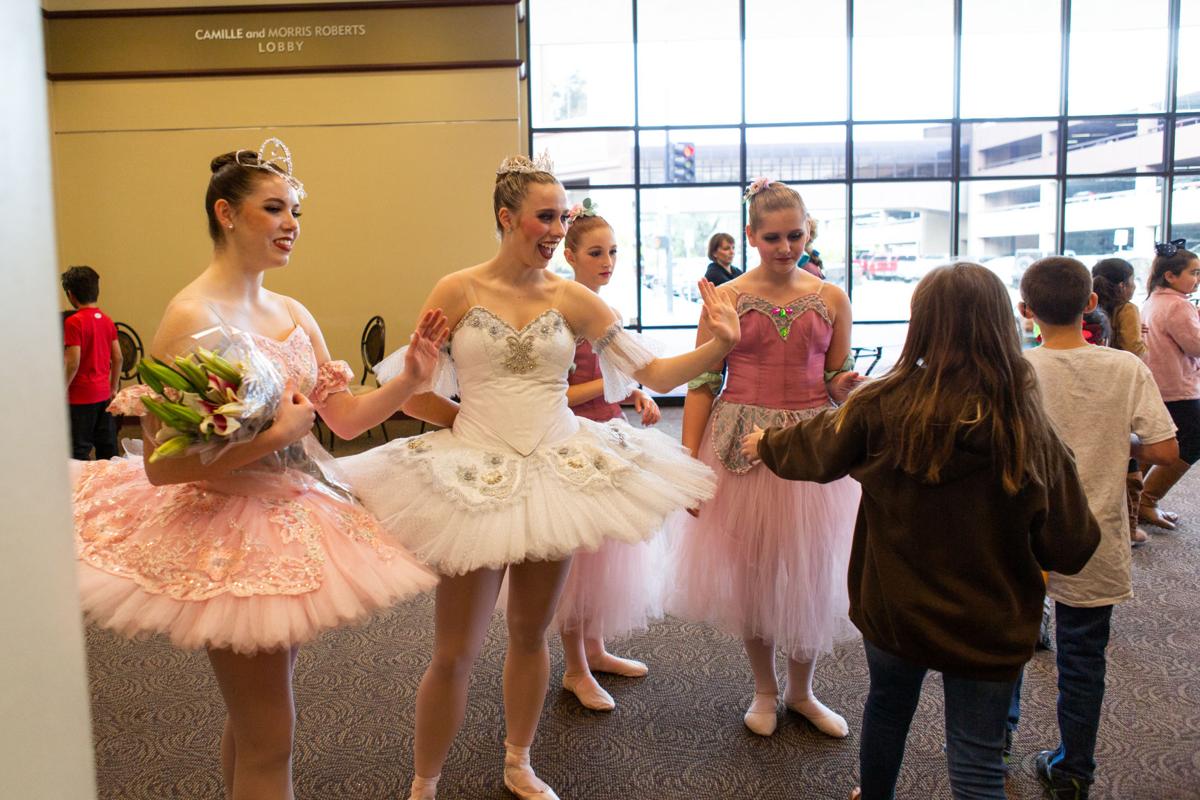 Hannah Friedrichs, 16, left, and Madison High, 17, wave goodbye to students as they leave after their performance of "The Nutcracker" at the Leo J. Welder Center for the Performing Arts. 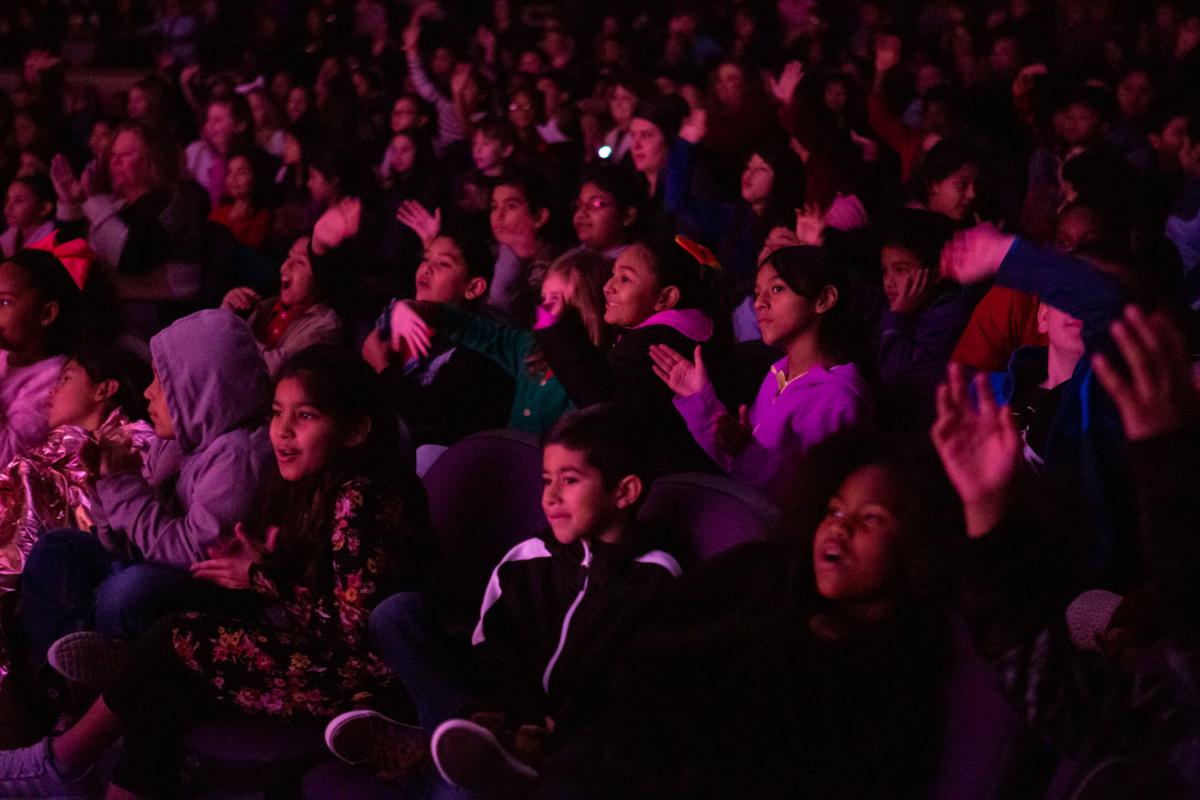 Students applaud the dancers at the end of "The Nutcracker" performance presented by the Victoria Ballet Theatre.

Madison High, 17, portraying the Snow Queen, dances on stage during the performance of "The Nutcracker" for students at the Leo J. Welder Center for the Performing Arts.

Caitlin Hoeft, who portrays Clara's mother, dances on stage during Act I of "The Nutcracker" for one of the student performances at the Leo J. Welder Center for the Performing Arts.

Students applaud the dancers at the end of "The Nutcracker" performance presented by the Victoria Ballet Theatre.

Eager faces peered from almost all 475 seats at the Leo J. Welder Center for the Performing Arts before the lights dimmed. Collective gasps and almost 1,000 little dangling feet began kicking with excitement on Thursday morning.

The third-grade students shushed each other just before Brenda Tally, artistic director for the ballet, took the stage to cheerfully welcome the room full of children. They were about to see this year’s first performance of the 35th annual production of “The Nutcracker” by the Victoria Ballet Theatre.

“Are you ready to see ‘The Nutcracker?’” Tally asked.

“What do you do when you like something?” Tally asked.

“What do you do when you really like something?” Tally asked.

“Yeeeaaahhh!” the children yelled as they clapped even louder.

When the lights brightened and cast members began appearing on stage, some of the students pushed their hands against their seats to prop themselves up for a better view while others settled back into their chairs.

The ballet opened with a feast for the eyes. An elaborately painted backdrop filled the entire stage wall, and the 19th century period costumes adorned with lace, ruffles and ribbons filled the stage with a kaleidoscope of color.

Who is your favorite Nutcracker Ballet character?

In the first scene, it’s Christmas Eve and Clara, who was played by Melbourn Motl, dances around a formal, gilded room with a small wooden sleigh in her hands. Guests begin arriving for the celebration, and the other children dance with swords, trumpets and dolls. When Clara’s godfather Drosselmeyer, who was played by William Tally, comes bearing gifts, the Nutcracker replaces Clara’s sleigh. Each scene ends with clapping and even soft giggling at times.

The Victoria Ballet theatre has been exposing third-graders to “The Nutcracker” since 1986 when the founding director, Debbe Busby, approached the school district. At that time, the Nave Museum exposed fourth-grade students to fine art and the Victoria Symphony exposed fifth-graders to classical music, so the 8-year-olds were the best fit for the ballet.

Historically, members of the community have helped cover the expenses associated with educational programming.

This year, a grant from Texas Women for the Arts, a program of the Texas Cultural Trust, also is helping cover the $6 discounted tickets.

Sophia Ortiz, 8, and Aliyah Cervantes, 8, both students at O’Connor Elementary School, were attending the ballet for the first time.

Ortiz called the dancing “amazing” and the costumes “very pretty.”

Cervantes, who has danced most of her life, sat in the front row. Her favorite characters are Clara, Drosselmeyer and the Nutcracker. She looked forward to telling her mother that she liked “everything” about the performance.

“Attending the performance gives them confidence because if they go somewhere else in high school or college, if they get invited to another play or a show, they have the self-confidence to walk in,” said Kara Dickinson, chair of the educational outreach committee for the ballet. “They know audience etiquette, and they’ve been to the Welder Center, so it gives them confidence.”

Each of the four educational shows will fill the theater for a total of about 1,900 students and their chaperones over two days. The third-graders attend public and private schools in Victoria and surrounding towns.

The educational programs bring our liveliest audiences – children, Tally said. She described the “oohing and aahing” at all the right moments.

“From the stage, you can see their eyes wide open as they sit on the edge of their seats,” she said. “It makes all the rehearsals, all the work, worth every minute.”

About 225 performers make “The Nutcracker” possible. Of those, 46 are members of the dance company, five are professional guest artists, and the rest are community members. Another 200 members of the community volunteer in various other capacities, Tally said.

“It’s wonderful to stand backstage from the wings and watch not only our own company dancers but also all the community members who dance in the productions,” Tally said. “Maybe it’s their first time on stage, or maybe they’re seasoned performers, but whether age 3 or 63, you can see the butterflies and nerves before the curtain goes up melt into a warm glow as they connect with the music, the dancing and the audience. They stand a little taller and move a little bigger – transforming into newly discovered versions of themselves.”

Tally said “The Nutcracker” is a gift to the community from Busby.

“Every audience member, every performer who has ever been connected with ‘The Nutcracker’ is better for it,” Tally said. “No one ever forgets the magic. Every time we hear the distant twinkle of the sugar plum music, or the sweeping notes from the waltz of flowers – whether in an elevator or at the mall – we pause just a moment and smile.”

All performances, Thursday through Sunday, of the "The Nutcracker" are sold out, but some tickets on hold might become available for Saturday's performance. Those interested can call the Welder Center box office at 361-570-8587 between noon and 5:30 p.m. Friday to inquire.