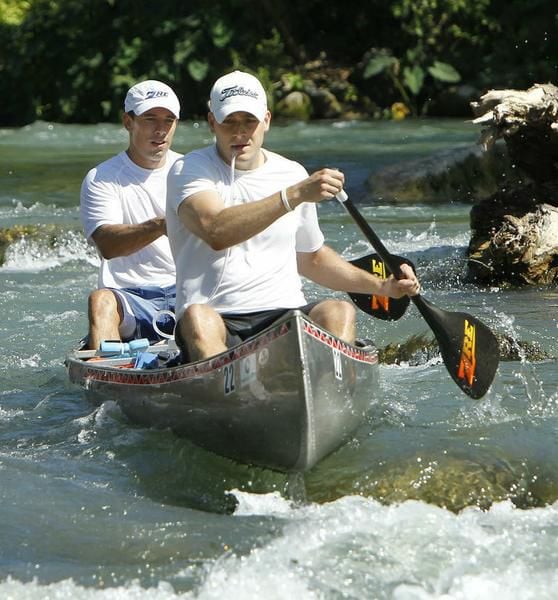 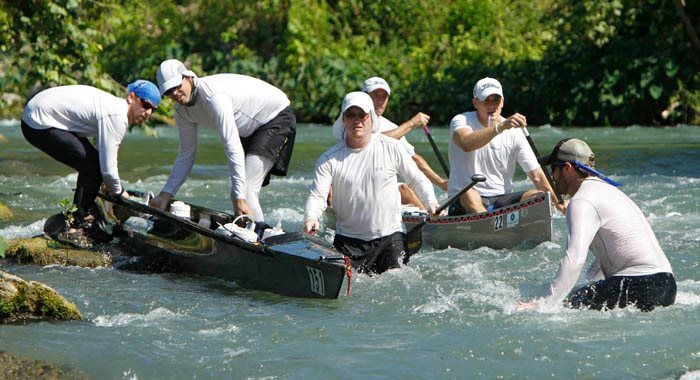 Boat No. 22 is shown passing through the Cottonseed Rapids in Martindale on Saturday early in the Texas Water Safari. Brad Ellis, 30, who paddled Boat No. 22 along with Ian Rolls, was airlifted from the river early Sunday and died in a San Antonio hopital on Monday.

Boat No. 22 is shown passing through the Cottonseed Rapids in Martindale on Saturday early in the Texas Water Safari. Brad Ellis, 30, who paddled Boat No. 22 along with Ian Rolls, was airlifted from the river early Sunday and died in a San Antonio hopital on Monday.

Scroll below for live coverage feed. To add your own updates on the race, Tweet using #txwatersafari.

To see a produced video about the start of the race, click here.

A Texas Water Safari paddler died Monday of too much water inside his body.

Brad Ellis, a 30-year-old Dripping Springs resident, died one day after he collapsed while in a boat on the Guadalupe River. His death was the first in the 50-year history of the safari, billed as the world's toughest canoe race.

Race officials cited the cause of death as water poisoning, also known as hyponatremia. The condition occurs when someone consumes so much water it creates a chemical imbalance in the body. A spokeswoman with the Brooke Army Medical Center in San Antonio said Ellis died at 1:30 p.m. Monday.

"It's shocking to the paddling community because we are an extremely tight-knit family," said Allen Spelce, president of the Texas Water Safari. "We have our own chat rooms and forums where we discuss issues, training and equipment, so we all know each other, so it's really hard."

Ellis was in Boat No. 22, a two-person aluminum boat with 34-year old Ian Rolls. This was the first time Ellis competed in the 260-mile canoe race from San Marcos to Seadrift. He worked in the Austin office of lobbying firm Ryan & Co., his friend Terry Dunn, of LaVernia, said.

Rolls entered and completed the race in 2011. Both men competed in and finished May's Texas River Marathon, completing the 40-mile tune-up race in 6 hours 29 minutes.

Ellis had been training for the race for months, Dunn said. An accountant by profession, he was meticulous in his planning, Dunn said. He labeled and packaged all of the food and supplies he and Rolls would need to stay properly hydrated, marking each item off the list after it had been consumed.

Ellis also kept careful track of the electrolytes he would need.

Dunn and Ellis, both outdoor enthusiasts, had been good friends for a year and a half, Dunn said. They met on texasbowhunter.com and Dunn and his other friends tracked his progress as Ellis spent months preparing for the race.

Dunn was at the hospital with Ellis' family and Rolls on Monday. Turning to Ellis' father, he told him what a wonderful person Ellis was.

"Brad was the kind of guy that every dad wanted his son to be, and that every father would be glad to have date their daughter," Dunn said.

Dunn described Ellis as a mischievous guy who liked to play jokes but was also deeply religious. In the wake of the loss, Dunn said, knowing that his friend had strong faith is comforting.

"He loved a good party, but he loved the Lord, and he was prepared for what happened. You never know when your time will be up," Dunn said.

The race continued on after word spread about Ellis' death. It will conclude Wednesday afternoon at the Pavilion in Seadrift.

Dan Waddell, a Gonzales-based game warden with Texas Parks & Wildlife, said Ellis' condition was reported 11 miles down river from the Gonzales city dam and about five miles south of the city.

Waddell received a call about the emergency at 5 a.m. Sunday.

Because there was a death, Waddell has begun an investigation. He expects the report to be completed by the end of next week.

Waddell said he did not see Ellis because the racer already was in an ambulance when he arrived. However, he spoke with deputies on scene and the property owner where Ellis was evacuated from, as well as his partner, Rolls.

Waddell said Rolls believed his partner may have had an electrolyte imbalance because he was drinking water and not beverages with electrolytes and salt.

"Mr. Rolls told me that he had been rowing for the last 20 miles by himself and the other gentlemen had given up and laid down for a nap in the boat," Waddell said.

Rolls relayed that he pulled over parallel to the bank for some reason, but Waddell does not recall the paddler's explanation for why it happened.

"When he shoved back off (the banks, Ellis) fell off the boat and the gentleman fell, sliding to the bottom. Mr. Rolls went down and rescued him."

In January, Ellis created a thread on texasbowhunter.com about his preparation for the 2012 Texas Water Safari, under the user name Concho Man. In March, he posted his involvement in the safari figured to be a one-time occurrence.

Ellis chronicled everything from how he was encouraged to try the race, to his practice runs, to his water intake. A follower updated the progress of Ellis and Rolls as they made their way down the San Marcos and Guadalupe rivers.

On May 7, less than 72 hours after completing a tune-up race, the Texas River Marathon, Ellis wrote:

"Only issue I'm having, and I've been this way my whole life, is the amount of water I consume. I was going through a gallon every two hours when it was that hot on Saturday. Most people consumed a gallon for the entire race on Saturday. Everyone who sees the two 1 gallon jugs (for me) in our boat always says that's way too much water. But to me, I need it."

"RIP Concho Man. You will be missed forever."