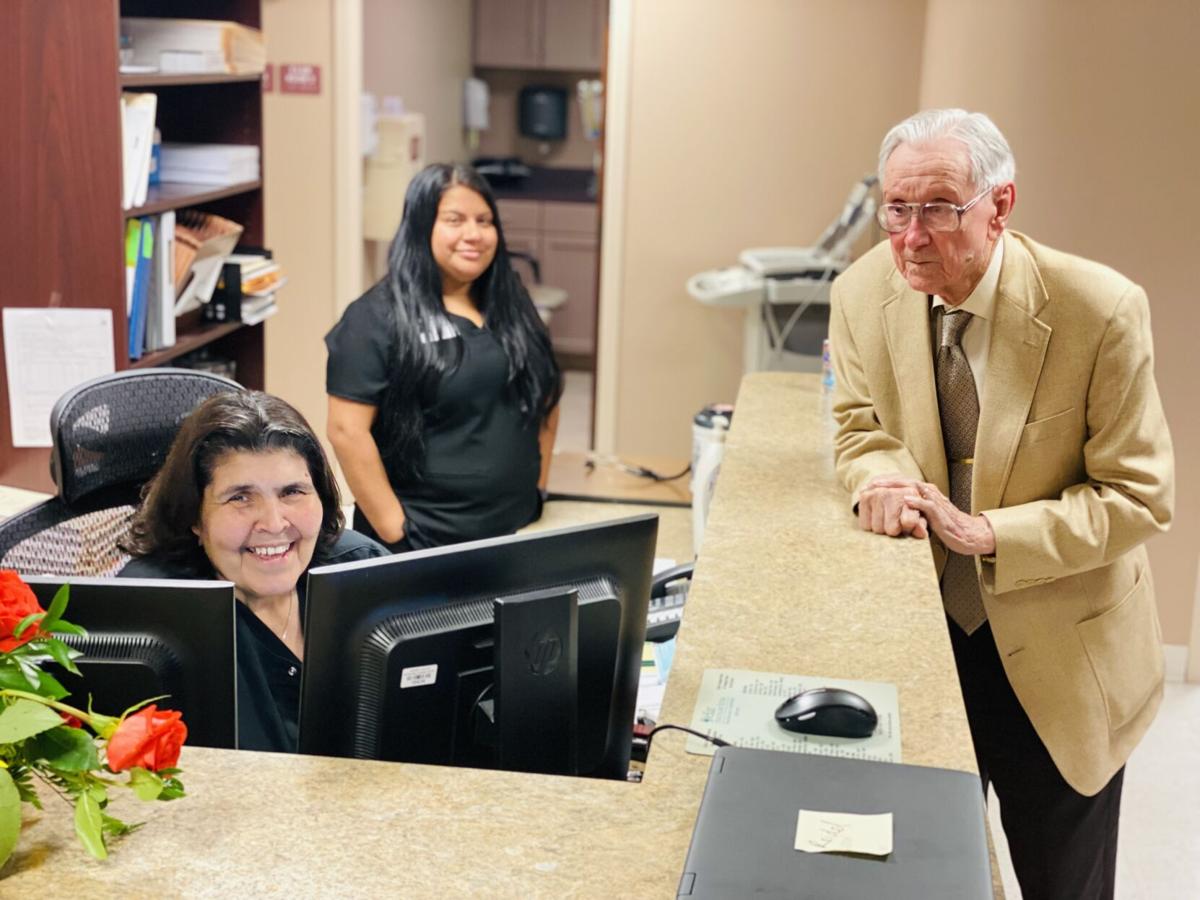 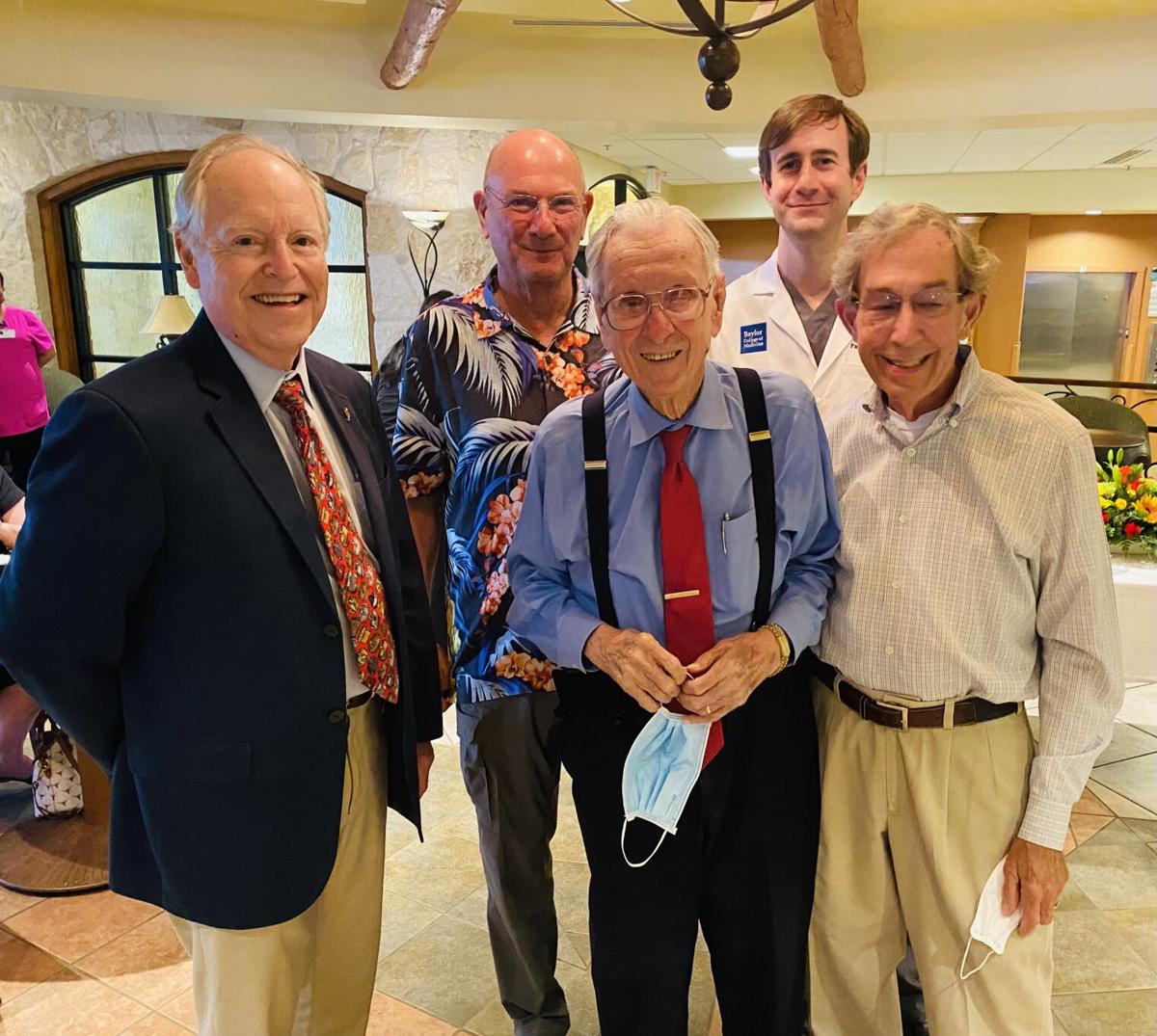 Dr. Larry Riedel, a physician of internal medicine with the DeTar Medical Group, has been serving patients for 65 years, and he has seen more medical advancements than he can possibly recall in one interview.

On July 22, members of the medical community, DeTar staff and family members gathered in the River Cafe at DeTar Hospital Navarro for a surprise celebration of Riedel’s 92nd birthday, which was July 23.

Dr. Bruce Bauknight, an internal medicine physician for 36 years before he retired, attended the party. Beginning in 1972, he traded night calls with Riedel, and he began sharing an office with him in the early 1980s.

“He is a wonderful doctor’s doctor,” Bauknight said. “Physicians pick him to be their doctor. He’s my physician. He has high standards, and his type of care given over the years has been highly recognized by all in the community. He probably takes care of more physicians and their families than anyone else.”

Bauknight continued that Riedel is a caring doctor who never turns patients away and always does what’s best for them. Riedel also keeps up with all of the medical literature and sends patients to subspecialists when necessary, he said.

“Until COVID, he would see patients at 2 or 3 in the morning and not leave it to the emergency room doctor,” Bauknight said. “My story was that I would wait until Dr. Riedel retired, and then I would retire one year later. I turned 66, and I said I better do it now.”

Riedel was born and reared in the Crossroads — Yorktown to be exact. He comes from a family of pharmacists including his father and his great-uncle who operated M. Riedel & Sons Drug Store in Yorktown.

Riedel initially decided to follow the same path and earned his degree in pharmacy in 1952 from the University of Texas at Austin. However, he soon shifted his attention to medicine.

“I just thought taking care of patients would be more fulfilling than filling prescriptions,” Riedel said.

He earned his medical degree from the University of Texas Medical Branch at Galveston in 1956, and he also completed his one-year internship and three-year residency in Galveston. In the middle of his residency, he served a three-year stint in the Army where doctors were in short supply.

Riedel arrived as a practicing internist in Victoria in 1963. At that time, DeTar was a single-story, stucco building on San Antonio Street, and Citizens Medical Center had opened just a few years earlier in 1956. The cost of a doctor’s office visit was between $3 and $5.

The medical breakthroughs Riedel has witnessed throughout his career have been overwhelming.

While in Galveston, Riedel waited in line with the children outside of school to get the polio vaccine, which put an end to the polio epidemic. At that time, there was no hesitancy like that of today with the COVID-19 vaccines, he said.

Before the development of the CAT scan, doctors used regular X-rays and examinations of patients to draw conclusions. And then they basically waited to see what was going to happen, Riedel said. In general medicine, the CAT scan now enables doctors to “almost” look inside the body to see what is happening.

When Riedel first arrived in Victoria, doctors used nitroglycerin, morphine and oxygen to treat heart attack patients. Now, cardiologists have heart caths. They put in stents when needed, and they remove blockages from arteries when necessary.

Sophisticated cancer treatments, organ transplants and kidney dialysis also were not part of the medical landscape earlier in Riedel’s career.

“When I started here, people didn’t get knee or hip replacements,” he continued.

The EMS system is another enormous step forward from the days when patients were transported to hospitals by funeral homes, he said.

“Now we go to the patient with EMS,” he said. “They can treat patients while bringing them to the hospital.”

“For instance, I remember at Citizens, one year, each doctor was assigned to cover one day (in the emergency room),” he said. “Can you imagine? There is no way you could handle that now.”

Statin drugs for treatment of elevated cholesterol also have helped doctors make huge strides. Before, there was no treatment except diet, which was not very effective, he said. Furthermore, there are a great number of medications to treat hypertension, which did not exist when Riedel started practicing medicine.

“Victoria really has become a medical center over the years with a great number of excellent specialists,” Riedel said.

Riedel practices medicine in his office five days per week, and for some patients, he also makes house calls, which was much more the norm in the earlier days of his career.

“There’s only so much you can do on a house call, compared to seeing someone in the office,” he said.

Riedel is married to Janyth Riedel. He has two sons, two daughters, two grandchildren and two great-grandchildren. At one time, he enjoyed playing tennis and sailing.

“The Victoria medical community is unique. There is very good cooperation between all the physicians here,” Riedel said.

A wonderful story about a oh so special Doctor who was my parents doctor for over 50 years. What a knowledgeable, caring., compassionate doctor who was always there at any hour to see to his patient's needs. He saw my parents through many health issues with my Mother living to 101 thanks to Dr. Riedel's excellent care with his caring heart. Dr. Riedel is one in a million and a true angel that God place on this earth . Thank you Dr. Riedel for all you have done for our family and the many families that you have been there for through the years. God bless you for being the oh so special Dr. Riedel.