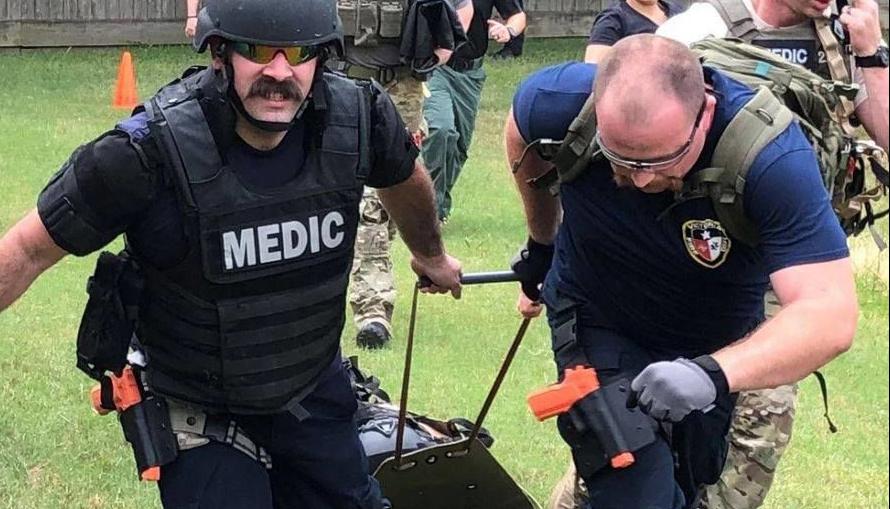 Christian Price, right, pulls a stretcher during tactical combat care training at Cypress Creek EMS. Price is one of six paramedics in the Victoria Fire Department’s new TEMS Unit, which is preparing to start deployment with the Victoria Police Department’s SWAT team in the fall. 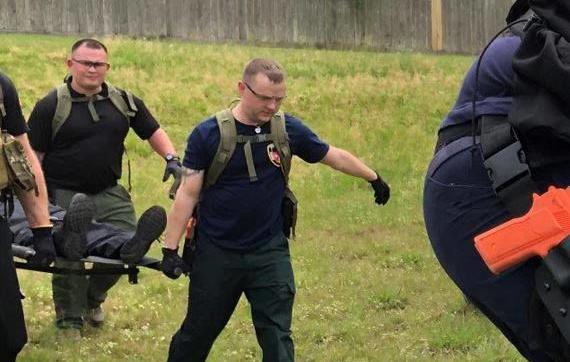 William Rollf, a paramedic with the Victoria Fire Department, carries a stretcher in May during the new TEMS Unit’s eight-day, 60-hour combat car training program at Cypress Creek EMS. All six members of the unit, including Rollf, are expected to be fully ready to deploy with the Victoria Police Department’s SWAT Team in the fall. Two more paramedics will also be added to the unit in October, said Fire Chief Tracy Fox. 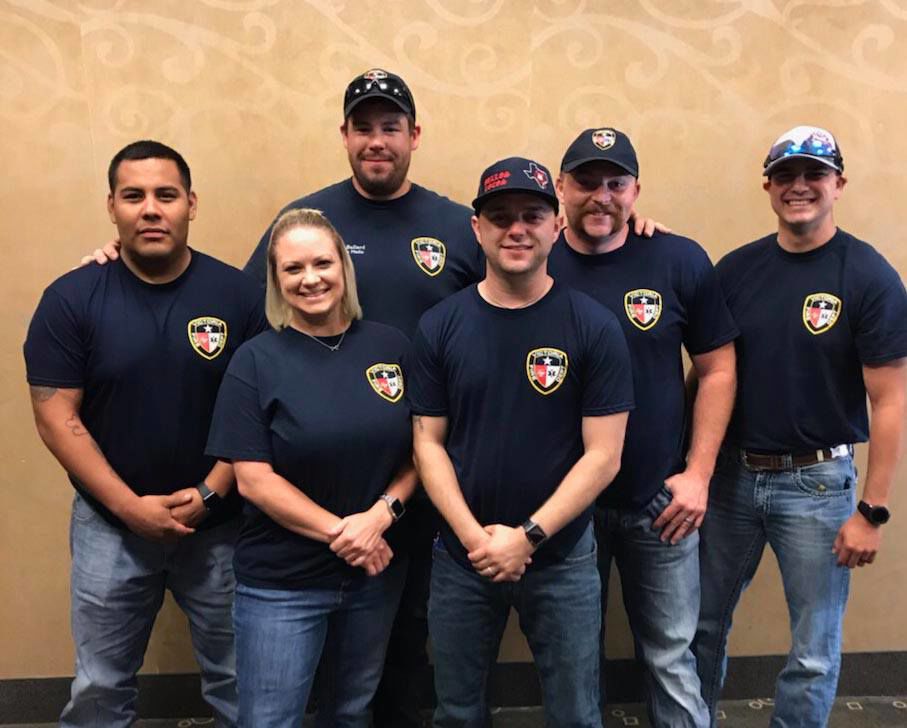 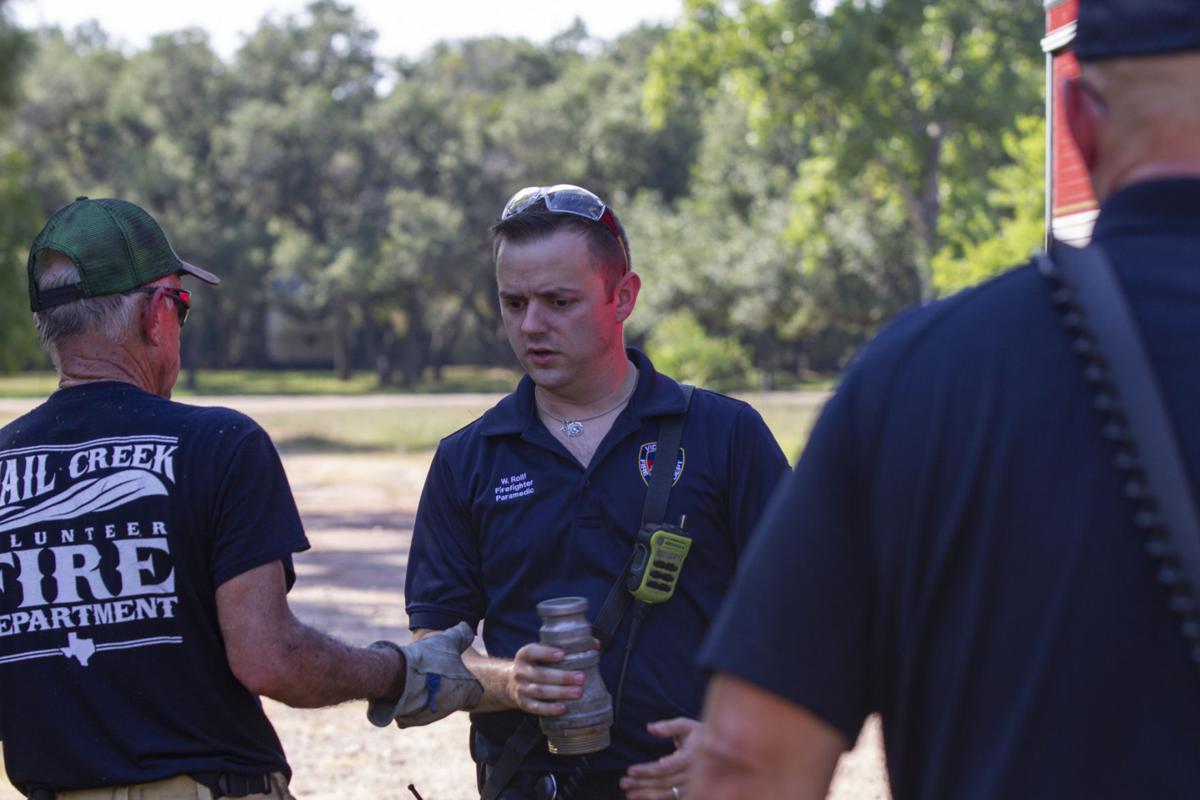 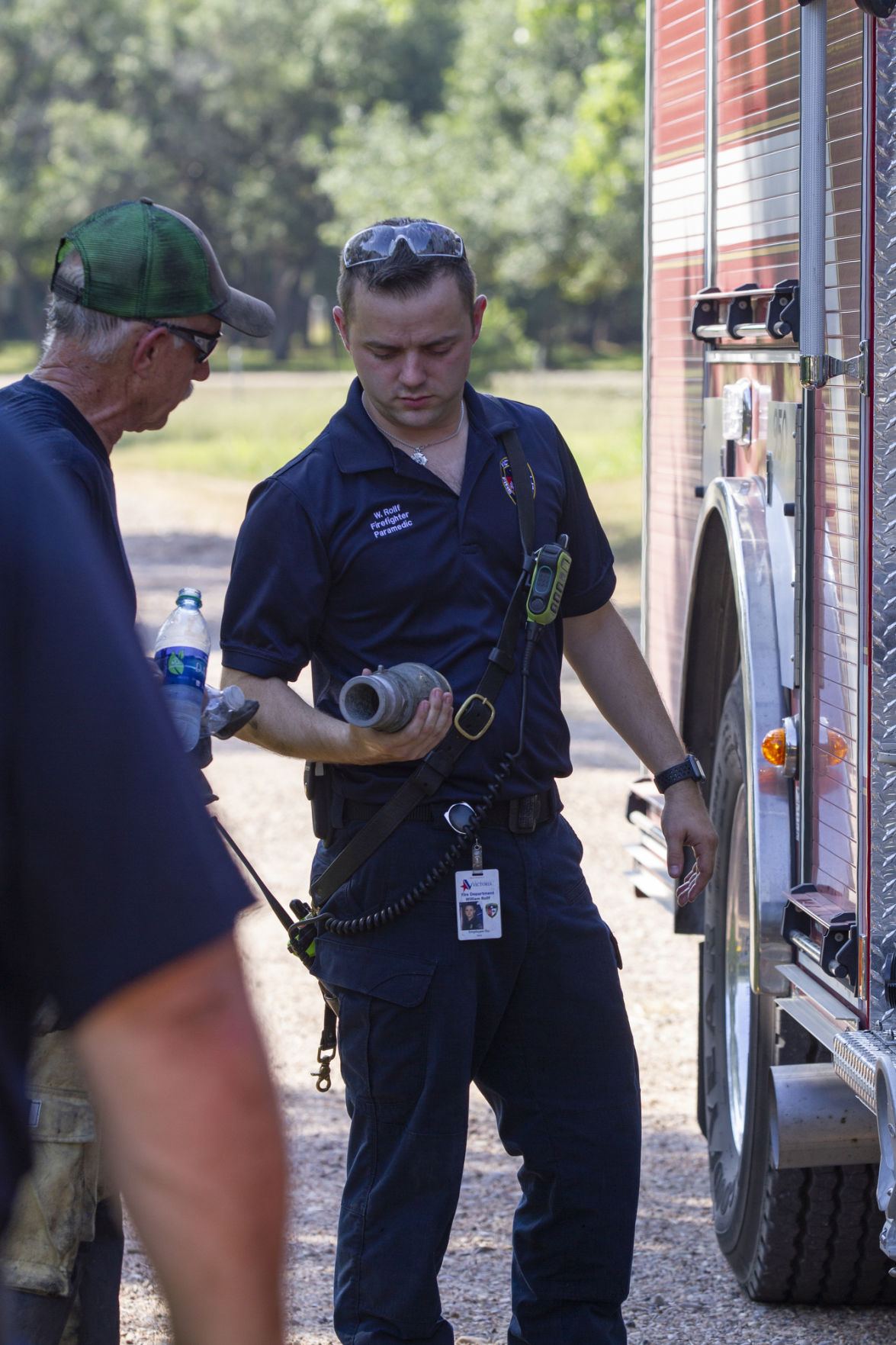 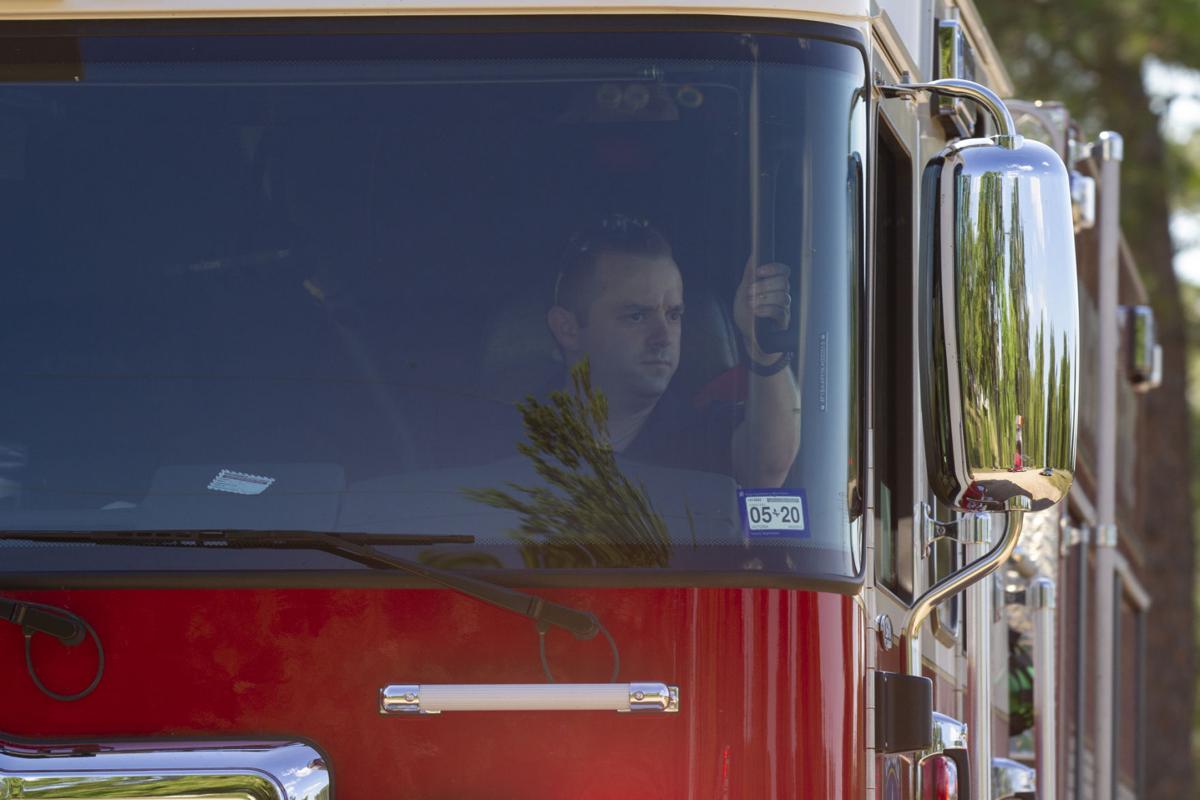 William Rollf, a paramedic with the Victoria Fire Department, leaves to fill up on water during a small grass fire in Victoria.

Christian Price, right, pulls a stretcher during tactical combat care training at Cypress Creek EMS. Price is one of six paramedics in the Victoria Fire Department’s new TEMS Unit, which is preparing to start deployment with the Victoria Police Department’s SWAT team in the fall.

William Rollf, a paramedic with the Victoria Fire Department, carries a stretcher in May during the new TEMS Unit’s eight-day, 60-hour combat car training program at Cypress Creek EMS. All six members of the unit, including Rollf, are expected to be fully ready to deploy with the Victoria Police Department’s SWAT Team in the fall. Two more paramedics will also be added to the unit in October, said Fire Chief Tracy Fox.

William Rollf, a paramedic with the Victoria Fire Department, leaves to fill up on water during a small grass fire in Victoria.

A 55-year-old Victoria man who was intoxicated and threatening to kill himself was shot by a police officer at a home on Hiller Street last year after he fired shots outside the home, where Victoria police officers had arrived.

The man survived, in part because of quick transport by the Victoria Fire Department. But the incident made Fire Chief Tracy Fox eager to find more ways to speed up care during high-risk incidents, where law enforcement and civilians can suffer traumatic injuries like major blood loss or breathing problems.

“It made us realize that we need to have this in place to save lives,” Fox said.

“Our paramedics will be dressed and attired just like the SWAT team, and they will deploy alongside to any kind of event they may have inside the hot zone, as we call it,” Fox said. “They will be able to render aid to any law enforcement officer or civilian that may be injured during that event, and dogs as well.”

The six paramedics who make up the Tactical EMS Unit went to Cypress Creek EMS in May for an eight-day, 80-hour Basic Tactical Operational Medical Support Course, which includes Tactical Combat Casualty Care certification. Two more paramedics will go through the same training in September, bringing the total to eight.

A major part of the cross-training is building trust, said Tim Decker, one of the Victoria paramedics named to the team.

“A lot of it is team cohesion,” he said. “In any kind of high-stress incident like this, even with the fire department, when we get in a stressful situation, we need to be able to rely on each other.”

As of July, the tactical medics are doing soft deployments with SWAT to get used to the process.

“If our tactical medics happen to be on duty when our police department needs us for a SWAT event, they’ll be our EMS standby crew,” Fox said. “They go to the SWAT briefing, participate in the pre-incident briefing and awareness of the event, and then they still stage away just because they don’t have the equipment and necessary stuff they would need to participate.”

Fox said he hopes they will be fully equipped to deploy by the fall, as procedures are still being formed and equipment purchased.

While there are currently no formal plans for the TEMS Unit to work with the Victoria County Sheriff’s Office’s SWAT members, Fox said they would explore collaboration with county law enforcement.

“Right now we’re trying to get our bearings with our city police, but we definitely believe it would be good to work with the county in the future,” he said.

The military started training medics to operate in combat zones during the 1980s and 1990s. The foundation of the training was largely outlined by a paper published by the Committee for Tactical Combat Casualty Care, which analyzed medic care during the 1993 Battle of Mogadishu in Somalia.

“Tactical teams, nationwide, the modern standard is to have a TEMS or tactical medic with the team, so I think we are moving toward (meeting) those nationwide or national standards for tactical teams to be integrated with medics,” said Lt. Clay Fetters, the technical commander of the police department’s SWAT team.

Decker, who served as a combat medic in the U.S. Army before joining Victoria EMS, said the training is “pretty much the same.”

“Everything’s kind of transitioning over to the civilian side,” he said. “In the society that we’re living in today, we’re seeing more of the calls where it is the active shooter or hostage situation ... By making this team, it helps give our SWAT team more support, medically, for them, as well as any victims.”

Providing care in the hot zone or combat zone is drastically different from a regular call for paramedics, Decker said.

“You’re going to be dealing with more gunshot wounds, possible stabbings, anything of that sort,” he said. “Medicine kind of speeds up, and in a way, we do more life-threatening things and interventions.”

“Now, you aren’t going into non-life-threatening situations. Every situation you go into actually has the potential to be very hazardous,” he said. “There is always fear of a worst-case scenario, getting shot or something, and then you build that camaraderie with the other people in the group with you, so if something happens and you’re unable to perform and save a life ... there is always that fear, too.”

Originally from San Antonio, Rollf said he applied to the TEMS Unit with no hesitation.

“Tactical EMS has always been kind of the next step,” he said. “When we’re on the street as regular paramedics, we have protocols that guide us, and we start off at a very basic level, then move to more and more invasive techniques. In the tactical field, there is no time sometimes … If we see an injury, we are trained to stop it with great measures right away.”

During regular calls, Victoria EMS is stationed in what is considered the ‘cold zone’ – a few blocks away from the potentially ongoing danger.

A life has not been lost as a result of a SWAT operation in Victoria because the team uses tactics that “actually make operations safer,” said Fetter, who has been on the SWAT team for more than a decade and in a leadership capacity on the team for at least seven years. Still, the past does not always reflect the future.

“Just because we’ve had good outcomes as far back as I know of doesn’t mean that tomorrow, a suspect can’t cause a serious injury to an officer or civilian,” Fetter said. “Victoria is not so different than many other towns that have had major incidents, you know, either mass casualties or situations where people have gotten serious injuries and police have had to intervene ... So it is not if; it is when.”

Decker said he jumped at the opportunity to be a part of the team because he sees the TEMS Unit as a way to show Victoria police that they have their backs and promote safety in the community.

“I wanted to be able to help our fellow brothers when it comes to the SWAT team, if something were to happen to them,” he said. “Our job – whether it is fire, EMS or law enforcement – we’re here to help people, and that is what we like to do, and anything that we can do to get better at that, I’m all for.”

While Victoria is the only county in the Crossroads with an entire TEMS Unit, Calhoun County EMS has been working with the Calhoun County Sheriff's Office's SWAT team in a similar capacity.

"They are there to protect the officers and those involved in their operations," he said. "We try to have someone available all the time, (and) we're both county, so we see them weekly."

"It incorporates law enforcement, EMS and fire and teaches us how to work as one team so we can go into warm zones, whereas in the past EMS and fire were kept away from them," said Brooke Moore, assistant director of Jackson County EMS. "(The training) was established based on school shootings but can be used in a wide variety of cases, (and) there are times a team can be established and put to use during different scenarios."