The city and county have a 929-page plan that outlines who does what, when and how in the event of a disaster like Hurricane Harvey.

That plan outlines critical steps governments should take to protect citizens, such as warning residents of oncoming hazards and protecting water supplies.

But during Hurricane Harvey, some parts of the plan weren’t followed, including steps to estimate damage to homes and businesses and organize volunteers.

Now, some community leaders are calling for an updated version.

“The lesson is learned,” said Victoria architect Rawley McCoy, who called for discussions on how to improve after the storm. “Now what are we going to do about it?” 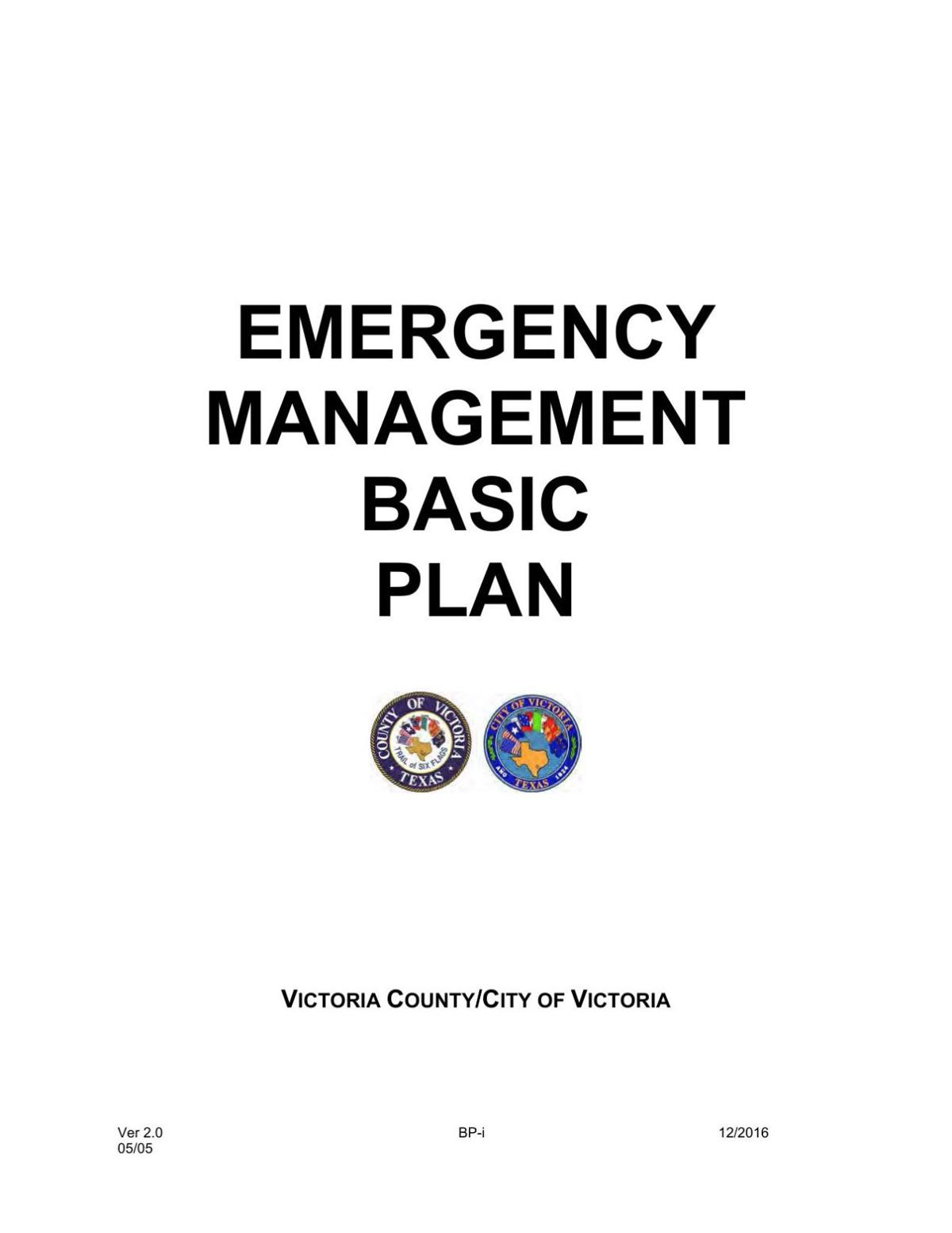 The storm forced displaced residents into shelters in Austin, shut down the city’s water system and left officials without estimates of how many homes and businesses were damaged.

In the storm’s aftermath, Councilman Jeff Bauknight asked for a copy of the plan and found some parts of it weren’t followed despite requirements for most of it to reviewed at least once a year.

In the new version, Bauknight said he hopes to see step-by-step plans to ensure residents are safe, for example, if there isn’t electricity powering the city’s water system or traffic signals are damaged.

“It’s stuff like that I want to see in the plan – here’s who you call and this is how to get what you need,” said Bauknight.

Bauknight said he hopes council members can review a new version of the plan this spring so it can be updated by the time hurricane season arrives.

Victoria’s top emergency official, Richard McBrayer, was out of town and could not be reached for comment about why parts of the plan weren’t followed or what officials hoped to improve in the updated version plan. County Judge Ben Zeller was also unavailable for comment Friday.

Even before disasters occur, the plan says Victoria should create and train damage assessment teams. The plan says there should be two teams – one that surveys damage to government facilities and another to assess homes and businesses.

When inspecting damage, the plan asks the surveyors to fill out forms about whether apartments, mobile homes or houses were damaged and to what extent. There’s a similar form for businesses, which calls for notes on damages and the length of any closures.

But that didn’t happen. In the aftermath of Hurricane Harvey, officials surveyed damage to government facilities, but there weren’t comprehensive estimates for damage to private property.

City Manager Charmelle Garrett said the reason why local governments do initial damage assessments is so they can ask for state or federal help. A few city departments did “initial windshield inspections” to estimate damage after Harvey, but detailed estimates weren’t needed because a disaster had already been declared.

“Once the state and federal government included Victoria County in the disaster declaration there was no need to complete the information,” said Garrett.

But the lack of data left local nonprofit leaders scrambling to identify the community’s needs. Mid-Coast Family Services, a nonprofit that provides rental help, ended up doing an informal survey to ask apartments if their units were damaged.

A few months after the storm, nonprofit leaders in charge of recovery were able to get some data from FEMA and are currently working to assess damage for people who ask for help. But it’s still unclear exactly how many people experienced home damage or have yet to returned home.

The plan calls for identifying volunteer groups that can provide help during disasters and lists a range of nonprofits including the American Red Cross and the Mennonite Disaster Service.

The plan also points to a local group that’s supposed to organize volunteer efforts and meet before a disaster ever strikes. But the group, called Voluntary Organizations Active in Disaster, had not been active for years and was not ready when Harvey struck.

The plan also says the VOAD generally oversees two sub-groups – a special committee to help meet residents’ unmet needs and another group to oversee donations. But it’s unclear if either of those groups were active before Harvey.

The lack of coordination left officials and nonprofit leaders hard pressed to organize help. In the emergency plan, lists of volunteer centers and distribution locations were both blank.

Bauknight, the city councilman, said volunteers who wanted to serve hot meals contacted him, but he didn’t know where to send them. He was told to call the VOAD group, but “they had no clue what to do.”

After the storm, emergency officials said they plan to ensure volunteer groups meet throughout the year to ensure they’re ready when disaster strikes. And nonprofit leaders who stepped up to help after the storm say they will keep organized even if local governments aren’t leading the charge.

For people who are especially vulnerable like those who are elderly or disabled, the plan calls for officials to send warnings over the radio, TV or going door-to-door to talk with residents.

It also says many people who don’t own cars will need help evacuating, and the government should arrange for school buses, ambulances or other vehicles to help transport people.

Usually, authorities aim to have 96 to 120 hours to prepare for evacuations. But Hurricane Harvey rapidly intensified during the course of a couple days, leaving government officials little time to organize evacuation efforts. That left some residents without cars or cash unable to evacuate.

Kim Pickens, who advocates for the homeless, took to the streets to warn people about the oncoming hurricane. For many people she talked with, it was the first they’d heard about the storm.

“They were panicking when they did find out,” Pickens said.

McCoy, the architect, said the government’s first priority should be protecting people who don’t have the means to protect for themselves. In the updated version of the plan, he would like to see the government figure out how many people need help and include detailed plans for evacuations.

According to the plan, local officials have “the ultimate responsibility for providing shelter and mass care to protect local residents displaced from their homes and others who evacuate into our jurisdiction due to emergency situations.”

Shelter, according to the plan, can range from short-term relief to longterm stays where evacuees need showers, sleeping and food.

But in Victoria, there were only two shelters during Harvey, both of which filled up quickly and could only house people for a couple days. So Victoria residents who needed long-term help were bused to San Antonio or Austin.

The plan says the American Red Cross oversees shelter operations and should make agreements with school districts, churches and other property owners who can offer shelters. But the list of shelters was redacted so it’s unknown where shelters are or if those agreements are in place.

However, community leaders are calling for a new shelter that can house people who lost homes. Derrick Neal, Victoria’s health department director, said there should be a designated building to shelter displaced residents for up to 90 days.

“It wouldn’t be a dome – maybe a gym, large church or community center – something that has showers and restrooms for several individuals,” Neal said.

The plan calls for taking all sorts of precautions to protect utilities like electricity and water, including curtailing residents’ water service to save water for fire fighting. It also says local officials should develop plans to install emergency generators in important facilities.

Some of Victoria’s important government buildings had generators, but a few important facilities needed to pump drinking water didn’t. Harvey shut down water service for a couple days, leaving the city limited supplies to fight fires.

And once the water service returned, residents were asked for about a week to boil water before drinking.

“We don’t want (hurricane season) to come around with a couple of things happening – we’re in the same position with water, and we don’t have an updated emergency plan,” said Bauknight.

During Harvey, the city was forced to borrow generators from a local hospital. To prevent the water system from failing again, the city is looking to purchase its own generators, said Bauknight.

Besides buying generators, Bauknight said he wants to see the plan updated with specific steps to ensure water supplies are protected. For example, if the person who oversees the water system is gone, is the plan detailed enough so others would know how to protect it?

“What do I do if we have a hurricane coming? What are the steps I need to take to make sure all the water towers are full – valve them off at a certain time to protect the water towers and water supply – all that stuff,” said Bauknight. “And that stuff is not in the plan.”