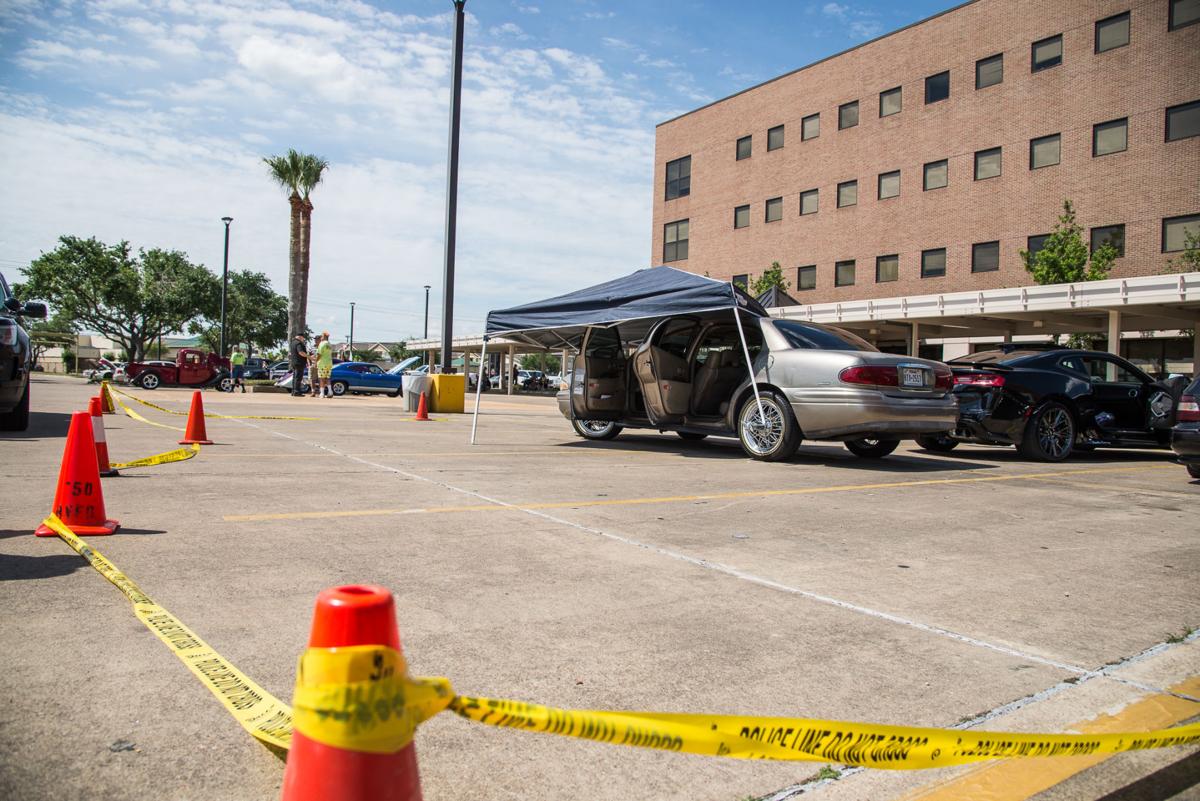 Caution tape blocks off a car involved in the death of a 65-year-old Goliad man during a Victoria car show. 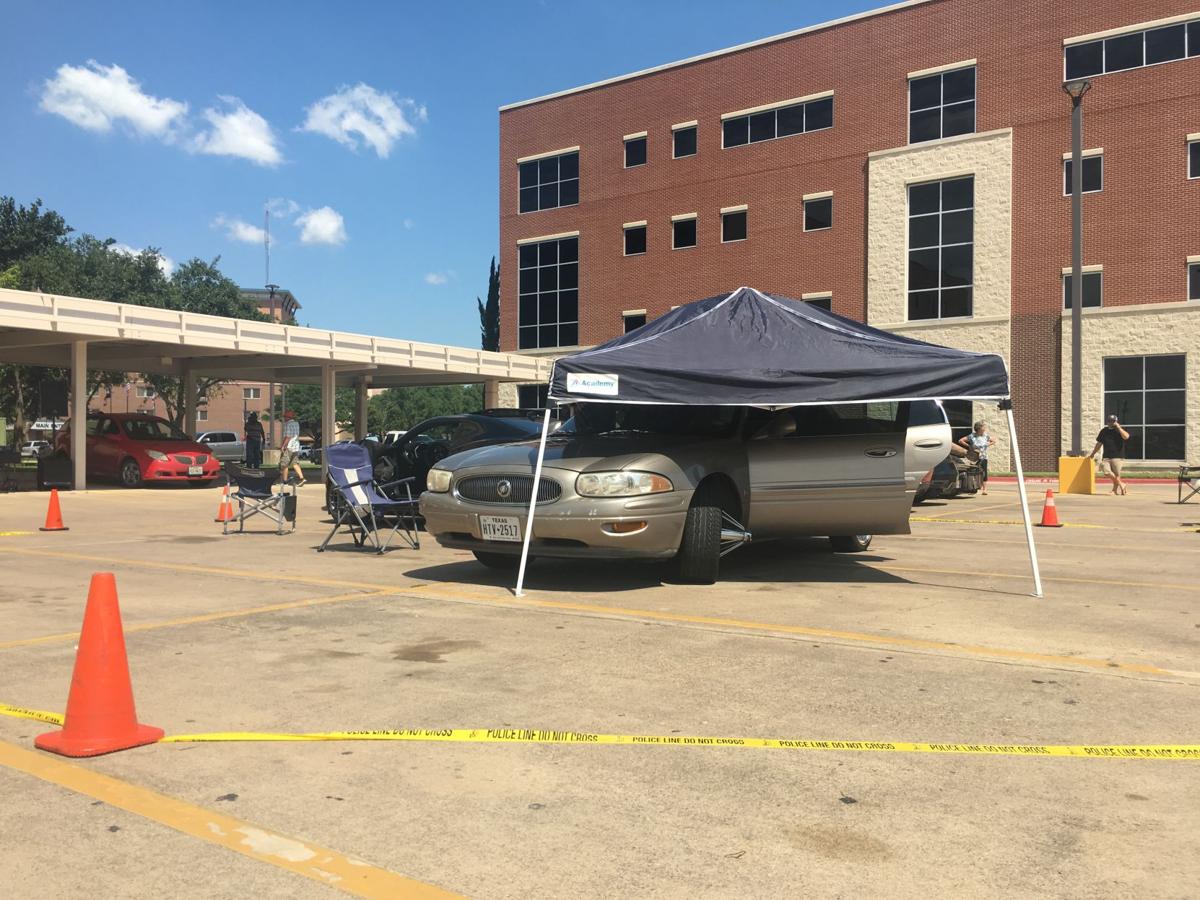 The driver was suspected of using this vehicle to run over a pedestrian. The crash occurred Saturday morning during the Father’s Night Out Car, Truck and Bike Show in the parking lot of Citizens Medical Center.

Caution tape blocks off a car involved in the death of a 65-year-old Goliad man during a Victoria car show.

The driver was suspected of using this vehicle to run over a pedestrian. The crash occurred Saturday morning during the Father’s Night Out Car, Truck and Bike Show in the parking lot of Citizens Medical Center.

“I’m trying to hold it together,” said Maria Pulido, a 52-year-old Victoria resident who held the dying man’s hand while praying and waiting for ambulances to arrive. “The look in his eyes is going to haunt me forever.”

Victoria police identified the driver of a tan Buick that killed Lawrence Christ, 65, of Goliad, as Victoria resident Johnny Durham, 37. Christ was pronounced dead at 12:35 p.m. at nearby Citizens Medical Center after he was struck about 10:15 a.m. in the parking lot of the hospital while working as a staff member at the Crossroads Cruisers Car Club’s Father’s Night Out Car, Truck and Bike Show.

According to court records, Durham has numerous convictions, including possession of controlled substance between 1 and 4 grams, evading arrest or detention and possession of marijuana but no violent criminal history.

His mugshot and charges resulting from the car show death were not available Saturday.

Police also could not answer whether Durham was intoxicated or suffering from a mental illness at the time.

Although Officer David Brogger, police spokesman, said Durham was taken to an unspecified hospital because of an unspecified medical condition, he did not provide further details.

“It was horrific,” said Douglas Jensen, a 53-year-old Indianola resident. “It’s not what you come to a car show to enjoy.”

Jensen and others in the crowd of about 100 visitors and exhibitors recognized the danger even before Christ, who was working there as a staff member, was injured by Durham’s Buick, he said.

Durham’s Buick immediately stood out to many in the crowd − many of whom had attended to examine or show off exotic vehicles.

His speed and apparent recklessness in driving through the crowd was another immediate cause for worry.

When Durham began speeding through the parking lot, which was crowded with about 100 visitors and car exhibitors, some in the crowd sprang into action, he said.

An off-duty Department of Public Safety trooper drew a handgun and ordered Durham to stop but did not fire. Others there, including Christ, ran to Durham’s vehicle in an attempt to stop him.

Their initial efforts were not enough to prevent the violence.

“Had (the trooper) shot (Durham), this poor man would not be in the hospital,” said Jensen’s wife, Dana Jensen, 53.

Jensen and his wife stood near their silver 2005 Ford GT and 1965 AC Cobra within feet of Durham’s Buick when they witnessed him drive over Christ. They were close enough to read Durham’s expression, which chilled them.

“He was looking straight ahead, just glazed over, no expression,” Dana Jensen said. “He looked possessed, like he was going to do something but didn’t know what yet.”

“He looked like he was a caged animal,” Douglas Jensen said.

Standing near the front, driver’s side of the Buick, Christ attempted to get the attention of Durham, who was then attempting a U-turn in a corner of the parking lot, said Pulido, who attended the car show with her brother and 7-year-old niece.

When Durham attempted to accelerate away from a crowd of people trying to stop him, his driver’s side tires ran over Christ’s body.

“You heard the screeching, and then he just got sucked up under the driver’s tire,” she said, adding, “It happened right in front of me.”

Pulido, Dana Jensen and others ran to the injured man’s aid as Durham drove to the other side of the parking lot.

Although his eyes were open and pulse present, Pulido could detect no awareness in Christ’s gaze.

“There was blood everywhere,” she said.

Others in the crowd kept Christ’s wife at bay to prevent her from witnessing the terrible violence.

As Pulido and bystanders held the man’s hand, others continued to pursue Durham, who drove to the other side of the parking lot.

After smashing into at least two parked vehicles, including a vintage red hot rod, the Buick stalled, coming to a rest underneath a tent, Douglas Jensen said. When Durham exited his stalled car, bystanders apprehended him, binding his hands with a leather belt.

Bystanders detained Durham until officers arrived. Although event organizers ended the event early, some visitors continued to peruse the cars there, taking photos and smiling as police investigators began their grim work at the scene. That sudden contrast gave pause to some who had witnessed the horrific events that morning.

“Our world has just gotten so crazy,” Pulido said.

A Victoria woman said the injured pedestrian was a car show staff member who tried to stop the car as it drove through a crowded Citizens Medical Center parking lot. pic.twitter.com/bMHEvOs29Y

Witnesses say a driver injured a pedestrian about 10:15 a.m. at Citizens Medican Center parking lot during a car show.

The Crossroads Cruisers Car Club recently donated $500 to the Crossroads Guardians of Hope. Shown with the donation, from left, are Agnes Howa…

I love asking people what they are passionate about. Working for the Victoria Advocate allows me to learn more about the fascinating things people are doing throughout their community.