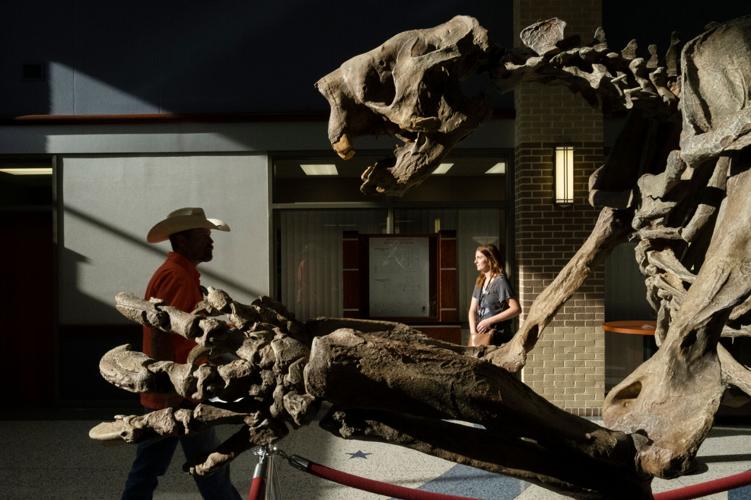 The sun sets on a Megalonyx jeffersonii, a giant ice-age ground sloth, during the grand-opening ceremony for Victoria College’s Life-size Prehistoric Fossil Exhibit on Thursday afternoon in the Health Sciences Center. 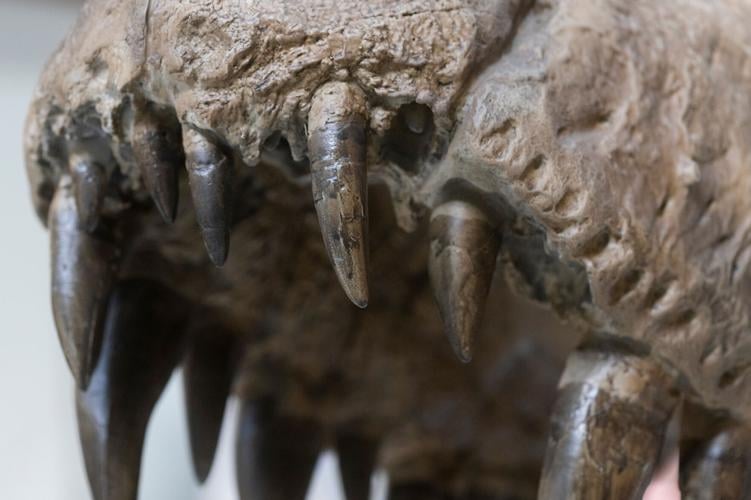 The Tyrannosaurus rex on display at the Life-size Prehistoric Fossil Exhibit is the only example of a prehistoric creature which hasn’t yet been found in Texas.

The sun sets on a Megalonyx jeffersonii, a giant ice-age ground sloth, during the grand-opening ceremony for Victoria College’s Life-size Prehistoric Fossil Exhibit on Thursday afternoon in the Health Sciences Center.

The Tyrannosaurus rex on display at the Life-size Prehistoric Fossil Exhibit is the only example of a prehistoric creature which hasn’t yet been found in Texas.

Most of the time, Victoria College is a modern institution educating students in new technology and ideas — but in one area, the college is positively prehistoric.

That area is the lobby of its health sciences building, which is now the home to a permanent exhibit of prehistoric fossil casts of animals who roamed what is now Texas millions of years ago.

The public exhibit, which officially opened Thursday afternoon, is home to animals such as Xiphactinus audax, the largest bony fish of the late Cretaceous period, Megalonyx jeffersonii, a giant ice-age ground sloth and even the Tyrannosaurus rex, technically the only dinosaur in the exhibit.

The exhibit is a part of the college’s goal of making STEM programs more accessible and inviting, which will include K-12 outreach and curricular enhancements for the college’s own STEM programs funded by a $3.6 million grant from the U.S. Department of Education.

“We cannot wait to see the families visiting this space, especially the children who dare to dream of a career in STEM,” the college’s President Jennifer Kent said. “We have the talent right here in the Crossroads, so we don’t have to depend on recruiting engineers, scientists, or mathematicians. I say we can grow our own.”

The exhibits are not the actual fossils themselves, but are replicas made by casting a mold of the fossil.

The replicas’ outer layers are epoxy, and their insides are expanding foam, according to Matt Weiler, an associate professor of geology at the college who led the project. This technique allows for scientifically accurate specimens to go almost anywhere, while also reducing their weight.

The oldest animals represented in the exhibit lived around 70 million years ago, while the youngest were alive as recently as 2 million years ago. All of them are replicas of fossils found in Texas, except for the Tyrannosaurus rex.

The exhibit is particularly significant for an institution the size of Victoria College, Weiler said.

“There’s a lot of paleontologists in the world who work at institutions who don’t always have these aspects, and so if you’re at the major research level … those levels will have some stuff like this available, maybe have one specimen,” he said. “For us here, this is off the charts.”

V. Bland Proctor, the chair of the college’s board of trustees, echoed Weiler’s sentiments at the exhibit’s opening.

“‘Prehistoric fossil exhibit.’ I never thought I would say those words as a trustee of Victoria College, but here we are, and what a fabulous occasion this is,” he said.

The Department of Education’s grant to the college will span five years, and is a part of the department’s Hispanic-Serving Institutions STEM & Articulation Program, which aims to increase the number of Hispanic and low income students who earn degrees in science, technology, engineering and math fields.

That grant will also go to fund other parts of the college’s STEM outreach programs, which is now equipped with a trailer to help bring programs to off-campus locations.

Several families at the exhibit’s opening were excited to see prehistoric animals here in Victoria, including Marissa Ball, a student at the University of Houston-Victoria, who was at the event with her kids after seeing the exhibits be installed while she was on the shared campus for class.

“I think it’s exciting for the little ones,” she said.

Now that the exhibit is officially open to the public, Weiler stressed how it shows the importance of science and Texas’ contribution to the field.

The board also gave the president a raise in line with the experience she's built as the college's leader, bumping her total annual compensation to $245,118.

Do you plan on visiting 5D Tavern in downtown Victoria?