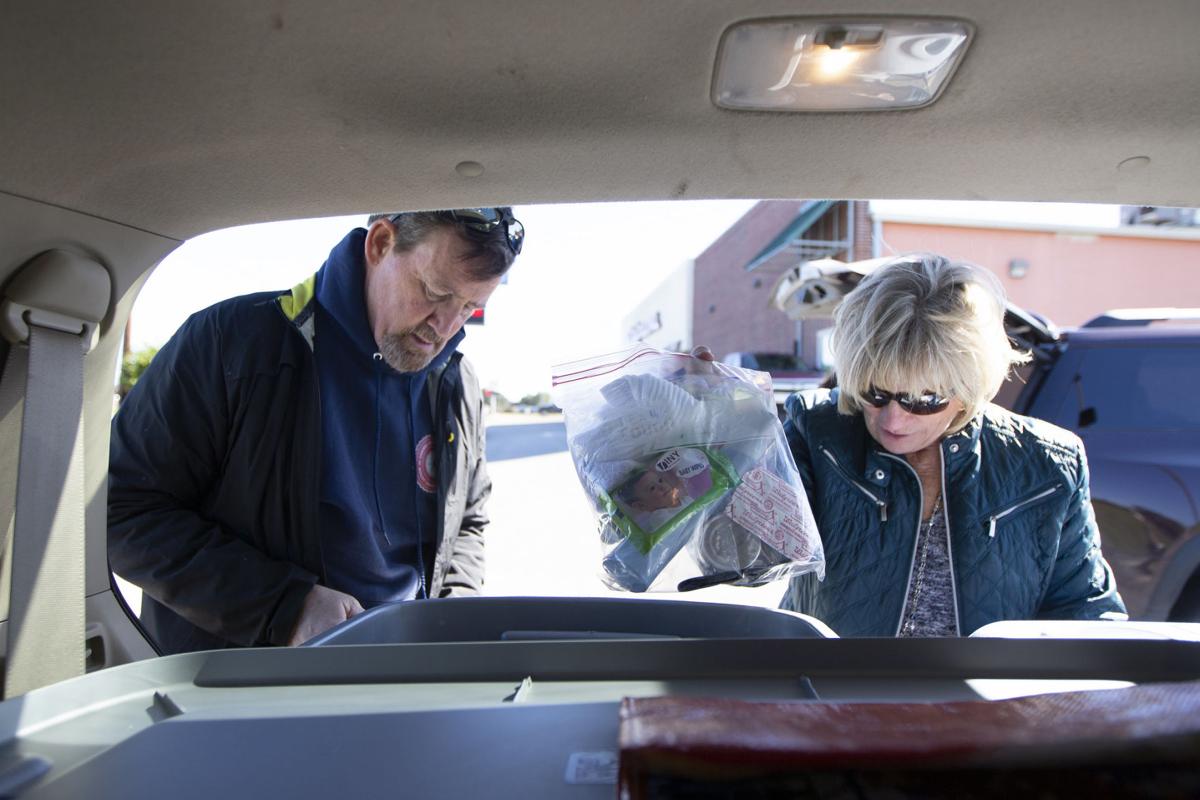 Mid-Coast Family Services board members Lee Keeling and Margaret Carver pack personal hygiene products in sandwich bags to offer the homeless as they prepare to visit encampments while collecting data for the national homeless count organized by HUD. 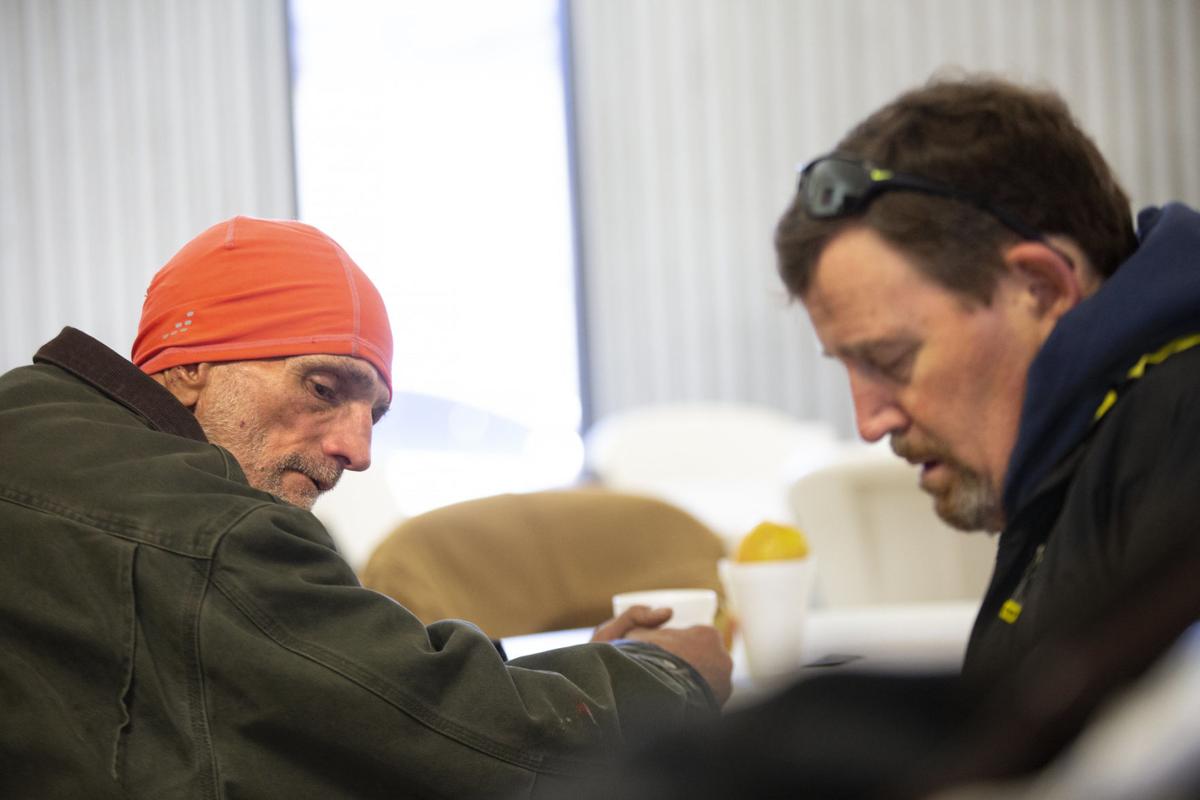 David Newman, 60, left, answers questions from Mid-Coast Family Services board member Lee Keeling at Christ’s Kitchen for the national homeless count by the Department of Housing and Urban Development.

Mid-Coast Family Services board members Lee Keeling and Margaret Carver pack personal hygiene products in sandwich bags to offer the homeless as they prepare to visit encampments while collecting data for the national homeless count organized by HUD.

David Newman, 60, left, answers questions from Mid-Coast Family Services board member Lee Keeling at Christ’s Kitchen for the national homeless count by the Department of Housing and Urban Development.

As soon as Wilfred Lugo wakes up each morning, he begins to worry, always about the same thing.

Where will he sleep that night?

For the past 17 months, the 54-year-old has bounced between friends’ couches and shelters, avoiding a cold and uncomfortable situation at all costs: sleeping on the street. He said this has been his anxiety-ridden reality since Hurricane Harvey sent a tree crashing into his rental home in August 2017. Despite months of searching, Lugo, who relies on disability checks after losing part of his leg to a motorcycle accident, hasn’t been able to find another rental that his roughly $770-monthly income can afford.

“It’s been tough; it’s been really tough on me,” said Lugo. “I’ve never been homeless like this.”

Lugo’s experience is not uncommon in Victoria. On Thursday, volunteers in Victoria listened to Lugo’s story, and dozens of others like his, as part of a nationwide effort to capture a snapshot of homelessness in America. Known as the Point in Time Count, this census is mandated by the U.S. Department of Housing and Urban Development, which then uses the data to decide how it allocates funding to combat homelessness in communities across the nation.

“HUD wants to have a clear picture of what the problem really is,” said Ginny Stafford, who runs Mid-Coast Family Services and spent Thursday tracking down people without stable housing. “At this point in time, how many people are living on the street?”

Armed with clipboards and plastic baggies filled with tissues, snacks and travel-sized toiletries, roughly 25 volunteers set out to abandoned buildings, shelters, camps and a soup kitchen to survey people without permanent homes. The volunteers ask questions about where the people are sleeping, what factors led them to lose housing and other demographic details. That information is then used to examine where communities need to ramp up services; for example, are they seeing higher numbers of teens or veterans experiencing homelessness?

The Victoria Area Homeless Coalition expects to have the region’s unofficial tally within the next couple of weeks. Last year, in the aftermath of Hurricane Harvey, volunteers counted 225 people without stable housing in Victoria and Calhoun counties – just a fraction of the actual number that advocates believe exists. Since volunteers only spend a day counting, the numbers are largely dependent on the weather and where people happen to be taking shelter at any given time.

“I feel like it’s a shot in the dark,” said Stafford, whose nonprofit provides housing assistance to people on the verge or experiencing homelessness.

In general, people find themselves without stable housing for a number of reasons. Their situations often involve a complicated mix of factors – like childhood trauma, mental health conditions, substance abuse disorders, health issues, a lack of family support and poverty. But without a stable home to live in, it’s hard to address any of those underlying issues, according to advocates.

“We talked to a lady this morning – she’s got 10 or 12 homeless people living in an abandoned building with her,” said Stafford. “And what she said to me is, ‘We can’t get off drugs if we don’t have a roof over our head.’”

“It reminds us how important housing is,” she continued. “To your mental health, to your physical health, housing is just critical.”

But in recent years, it’s become harder and harder for Victoria families to find an affordable place to live. Rents have risen, but wages haven’t kept up. Then overnight, Hurricane Harvey turned Victoria’s affordable housing shortage into a crisis when it damaged one-third of the city’s apartments, including 400 that were so bad that tenants were forced to move out.

Those experiencing homelessness, like Lugo, are all too familiar with that reality. Since losing his home, he spends most of his days in Christ’s Kitchen, a local soup kitchen where he can hide from the heat, wind and rain.

“I’ll pay my own bills; I’m a homebody,” he said. “Man, I just need some help getting an apartment – please.”

The following are just a few groups in Victoria working to help people experiencing poverty:

Do you know someone who is homeless?