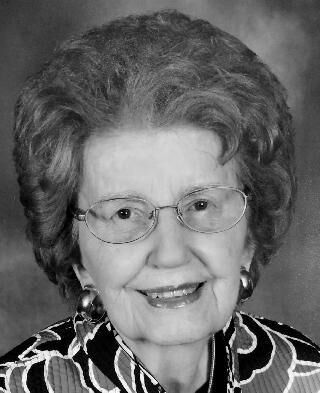 Betty Jean Cain
PORT LAVACA — Betty Jean Cole Cain was born April 19,1927, San Antonio, Texas, to George and Gladys Cole. She grew up in Goliad, Texas. After high school graduation she attended Baylor University where she received a Bachelor’s degree in Administration.
Jean taught business courses at Victoria Junior College. While teaching, she agreed to a blind date with a young Marine who had just completed his active duty. When he arrived, it was love at first site. She grabbed his hands and told him “I am going to marry you!”. On June 3, 1948, Mabry and Jean Cain were married at First Baptist Church, Goliad, Texas. Their life was one of love and devotion to each other, family and God.
The couple managed Cole’s retail stores in Yorktown and Edna. They were later blessed with two daughters, Candy and Cathy. In 1958, Cole’s, Inc. consolidated in Port Lavaca, Texas. After moving, Jean and Mabry joined First Baptist Church where they became active in their church and community.
Jean lived to serve her Lord, her husband and her family. She provided a loving and happy Christian home. She spread joy and happiness to friends and employees to show how much they meant to her.
Jean’s mantra was “to serve others as Jesus has served me”. And serve she did. Jean served by holding director/committee positions, taught Sunday School and shared in local and international mission fields. After a trip to the Holy Lands, Jean and Mabry volunteered to assist with child care while families visited incarcerated loved ones. She loved to color with the children and tell them stories about the love of Jesus.
Jean served Jesus in her later years by teaching English as a second language to Burmese and other non-English speaking nationalities. She was also on the board at Mary Hardin Baylor; member of the Chamber of Commerce; member of Alpha Omega and Junior Service League.
She always stood strong in her faith, her love for family and for her Jesus. The Lord has now brought his faithful angel home.
Jean was predeceased by her loving husband, Mabry L. Cain, Jr.; her parents, George and Gladys Cole and her beloved sister, Mary Lou Cole. She is survived by her daughter’s Candy Cain Taylor (George) of Seguin; Cathy Cain Clymer-Barrera (Trino) of Victoria; grandchildren, Clint Bowers (Shari) of Round Rock, Wes Bowers (Tim) of Houston; James Clymer (Beaumont); Jamie Clymer Ruiz (Jose) of Victoria; Sarah Clymer (Victoria) and 14 great-grandchildren.
Due to COVID 19, all services will be private. Thoughts and memories may be shared online at www.gracefuneralhome.net.
Arrangements and services under the personal care of Grace Funeral Homes & Cemeteries.

Prayers for the Cain Family

Are your children up to date on their vaccinations?