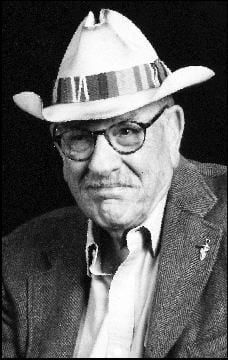 VICTORIA - 'To the man who lived everyday authentically and unapologetically himself. I'll miss you grandpa.' – Isabel McCan

Kerry McCan, a gentleman, scholar, historian, author, wingshot and cowman died peacefully at his home with his wife by his side on the afternoon of April 8, 2016.

He was born to Claude Kerry McCan, Sr. and Sue Ragsdale McCan on July 22, 1930 in San Antonio, Texas. Kerry was a 6th generation Texan and descendent of James Alfred McFaddin who established one of the largest cattle ranches in Victoria County in 1877. Kerry graduated from the Culver Military Academy, attended the Hotchkiss School and received his Bachelor's Degree from Yale University in 1954.

He played Polo during his years at Yale and continued to play Polo in south Texas, introducing his love for Polo to his son Bob McCan. Kerry also was a sportsman and excellent wingshot who traveled the world hunting birds. Kerry was a director of the Texas and Southwestern Cattlemen's Association for many years and a longtime director of the board of the First Victoria National Bank.

He was a first lieutenant in the U.S. Marine corps and served a year in Japan and Korea during the occupation. Upon his return to Texas, Kerry married Mary Carroll Groce on the fourteenth of May 1955. They made their home in McFaddin,Texas. Kerry was general manager of the McFaddin Ranch as well as the Welder-McCan Cattle Company partnership in Woodsboro,Texas for many years.

At his downtown office desk Kerry McCan wrote in longhand three historical novels. 'Brindy Polaris', an epic of the early cattle drives of Texas, 'Gringo Verde', a romantic and excellent history of the Mexican Revolution, and 'The Republic of the Sierras', starring Sam Houston as its President.

Kerry leaves behind a family who loved him: His wife of 61 years, Mary Carroll Groce McCan; sons: Claude Kerry McCan III and his wife Jane of Austin, James Robert (Bob) McCan and his wife Julie of Victoria; grandchildren: Rachel Irene McCan of Austin, Texas, Robert August McCan of McFaddin, Texas, and Mary Isabel McCan of Denver, Colorado. Kerry is also survived by his sister Sue McCan Cannon of Denver, Colorado, and his devoted nieces and nephews: Margaret Cannon Morrissey and her husband Mitchell, Madeline Sue Morrissey and Mitchell Cannon Morrissey of Denver, Colorado, Claudia Cannon Knudsen and her husband David of Lipan, Texas, Kerry McCan Cannon and his wife Susan of Australia, James Ragsdale Cannon and his wife Karen and their daughters Sophie and Phoebe of Golden, Colorado, Patrick Cannon of London England, and Sam Cannon and wife Hailey of Fort Collins, Colorado; cousins Sallie Dean and husband Larry Rouse of Vail, Colorado and Jesse Dean of Victoria; and also numerous cousins of the McFaddin family.

A private burial at Evergreen cemetery to occur on Wednesday April 13 at 12:00 followed by a funeral service at Trinity Episcopal church for all who wish to pay their respects at 1:00 pm Wednesday April 13. In lieu of flowers, please make any donations to Hospice of South Texas or Victoria Regional Museum Association.