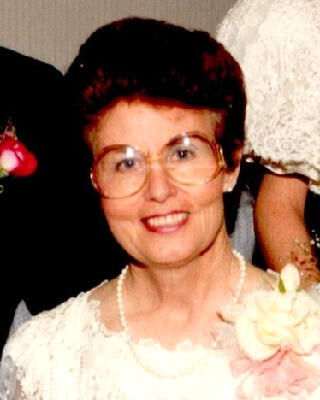 Margaret “Pat” Riddle
VICTORIA — On July 24, 2022, Margaret “Pat” Riddle went to her heavenly home surrounded by her two children and loving caretakers. Visitation will be held on Friday, August 12, 2022 at 9:30am, with funeral services beginning at 10am at Rosewood Funeral Chapel. Interment will follow at Memory Gardens Cemetery. Serving as pallbearers will be William “Will” Lane Garrett III, Collin Thomas Brown, Drew Claiborne Brown, Marc Garrett, Mark Rains and Greyson Slough.
She was born to Thomas Howard Claiborne and Edith Bradburn Claiborne on June 23, 1932 in Aguilar, CO. Her family moved to Mineral Wells, TX when she was a child. She graduated from Mineral Wells High School. Later she moved to Victoria, TX where she met the love of her life, William Lane (Bill) Garrett. They married on November 2, 1952 at Second Baptist Church in Victoria. She was employed at Timberlake Motors, Southwestern Bell Telephone Co. and Northside Baptist Church and Day school.
She enjoyed camping, studying her bible and spending time with her grandkids. She especially loved teaching kindergarten. Faith, family, and friends were her world.
Her hobbies included sewing (she was an excellent seamstress), quilting, playing cards with her family and playing many games of Scrabble with the late Mona Ruth Garrett.
She was preceded in death by her parents; first husband, William Lane Garrett; second husband, Robert W Riddle; brothers, Dennis Wheary, Phil Claiborne, Jack Claiborne, Eddie Claiborne and Billy Claiborne; and sisters, Addie Claiborne Smith, Mary Claiborne Smalley and Elaine Claiborne Dubin.
She is survived by her son, William “Rusty” Lane Garrett (Ann Chlapek Garrett); daughter, Tami Garrett Brown (Brian); grandchildren, William “Will” Lane Garrett III (Drew), Collin Thomas Brown (Kim Bova) and Drew Claiborne Brown (Allison Chown); and great-grandson, William “Liam” Lane Garrett IV.
The family would like to send a special thanks to Monica Lott and the staff at Silver Serenity and Hospice of South Texas.
Thoughts and memories may be shared at www.rosewoodfuneralchapel.com.

Add an entry as anonymous

I remember in our beginning days of membership at Northside Baptist that Bill and Pat Garrett were one of the first couples, along with Ruth Nelson and her husband that welcomed us to Northside. Later she would teach Sunday School with my children in her class. She alway has a sweet spirit and love for people she came in contact with. Earlier in the beginning times of Northside the Garrett family was friends with my grandparents, mother and uncle, James and Francis Brown. In the past recent months I came across a baby shower book of my brother's that Pat had attended and signed dated back to October 1958. My condolences and prayers to your family during this time. Kim Fikes

Keep it Clean. Please avoid obscene, vulgar, lewd, racist or sexually-oriented language.
PLEASE TURN OFF YOUR CAPS LOCK.
Don't Threaten. Threats of harming another person will not be tolerated.
Be Truthful. Don't knowingly lie about anyone or anything.
Be Nice. No racism, sexism or any sort of -ism that is degrading to another person.
Be Proactive. Use the 'Report' link on each comment to let us know of abusive posts.
Share with Us. We'd love to hear eyewitness accounts, the history behind an article.