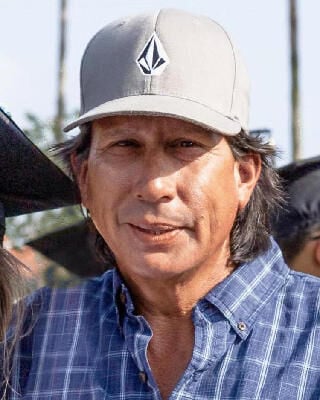 Oscar Lynn Gonzales
PORT LAVACA — Oscar Lynn Gonzales, 51, of Port Lavaca, TX surrounded by angels earned his wings and joined our Heavenly Father on Monday, March 22, 2021.
Oscar was born on April 3, 1969 in Port Lavaca, TX to Pauline Vargas Garza and since the age of ten years old was raised by his dad, the late Joe R. Garza, when they all became a family. He was preceded in death by his father Joe R. Garza, maternal and paternal grandparents, and two uncles.
He is survived by his mother Pauline Garza; son Zachary Lynn Gonzales; daughters Hannah Lozano and husband Jon-David, Haleigh Gonzales and fiance Zachary Cruz; grandchildren Noah Lozano, Emma Cruz, Jett Lozano and Blake Lozano; sister Joy Cardona (John) and several nieces and nephews.
Oscar was a kind and loving son, father, brother and grandfather. He enjoyed spending time with his children and grandchildren. He loved to surf and skateboard. He liked to watch movies and eat popcorn as well as listen to 80’s rock music. He will be dearly missed by all who knew him.
Pallbearers are son-in-laws Jon David Lozano and Zachary Cruz; Uncle Seferino Vargas, brother-in-laws Samuel Gonzales Jr. and Isaiah Gonzales Sr., and friends Richard Arriaga, Randy Reagan and Miko Garza. Honorary pallbearers are his nephews.
Visitation will be held Tuesday, March 30, 2021 from 6:00 - 8:00 pm with a rosary to be recited at 7:00 pm at Grace Funeral Chapel, 1604 W. Austin St., Port Lavaca. A funeral mass will be held Wednesday, March 31, 2021 at 12:00 pm at Our Lady of the Gulf Catholic Church, 415 W. Austin St., Port Lavaca with interment to follow at Port Lavaca Cemetery. Please join the family for an honorary dinner at the VFW, 16 Konrad Rd., following Wednesday’s services to honor Oscar’s life.
Thoughts and memories may be shared online at www.gracefuneralhome.net.
Arrangements and services under the personal care of Grace Funeral Homes & Cemeteries.