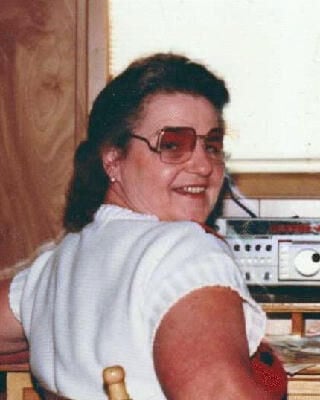 Rosalee Boldt Knutson
VICTORIA — Rosalee Eva Stepanski Boldt Knutson was born at home on October 30, 1931 to Frank J. and Regina Jendrzey Stepanski in Yorktown, Texas.She was called home to be with her Lord and Savior on January 18, 2021 at the age of 89 years.
Rosalee grew up in Yorktown where she attended Holy Cross Catholic School and Yorktown High School. She met the love of her life, Victor James Boldt, at a church picnic at the Yorktown Community Hall.Victor happened to be home on leave from the U. S. Navy and was playing in his brother’s swing band, the Leon Boldt Orchestra, when their love blossomed.They married October 19, 1950 at Holy Cross Catholic Church and celebrated nearly 40 years of marriage before Victor’s passing.
Victor, who was a radio engineer and station manager, introduced his wife to radio broadcasting. Rosalee was known as Ramblin’ Rose to many adoring fans who listened to her lively voice on the radio.Her radio career began at KIOX in Bay City. At the time she was one of the first female broadcasters in the state of Texas. Her career took her to KVIC, KNAL and KTXN in Victoria, as well as KWIV in Douglas, Wyoming.
Rosalee was active in the choir and as a reader at St. Mary’s Catholic Church. Her eleven children also kept her very busy. She was a proud mom to have had five of her sons serve in the U. S. Navy and a sports mom to her five daughters who all earned college basketball scholarships. Her favorite activities were dancing, dominoes and fishing, which she enjoyed frequently well into her eighties.
Rosalee met Kenneth “Bing” Knutson by means of ham radio.She travelled to North Dakota to meet him and after a short courtship they married. Kenneth made Victoria his home.The two travelled extensively, built a new home, and enjoyed many years together until his death in June of 2007.
She is survived by her children and spouses: Frank (Mary) Boldt, Eloise Warzecha, August (Diane) Boldt, Mary Martin, Gina (Ronnie) Walker, Anna (Ronnie) Franzoy, Louis (Sue Lynn) Boldt, Charles Boldt (Michele Prihoda), and Tisha (Gary) Martin, and daughter-in-law Dennise Boldt. She was grandmother to 19, great-grandmother to 32, and great-great-grandmother to one.
She was preceded in death by her parents and siblings, Joseph, Martin and Paul Stepanski, and Mary Luedicke; both husbands, sons Michael and Joseph Boldt, grandson Christopher Boldt, daughter-in-law Amy Janacek Boldt, sons-in-law Thomas McDuff, Deacon Gene Warzecha, and Anthony Martin.
A rosary will be recited at 9:30 am with a Christian celebration of life at 10:00 am at The Cathedral of Our Lady of Victory on Friday, January 22, 2021. Burial will follow at Resurrection Cemetery.
In lieu of flowers, the family humbly requests a donation to Our Lady of Victoria Catholic Church or Hospice of South Texas.
Thoughts and memories may be shared online at www.gracefuneralhome.net.
Arrangements and services under the personal care of Grace Funeral Homes & Cemeteries.

Have you ever talked with your mayor or county judge?