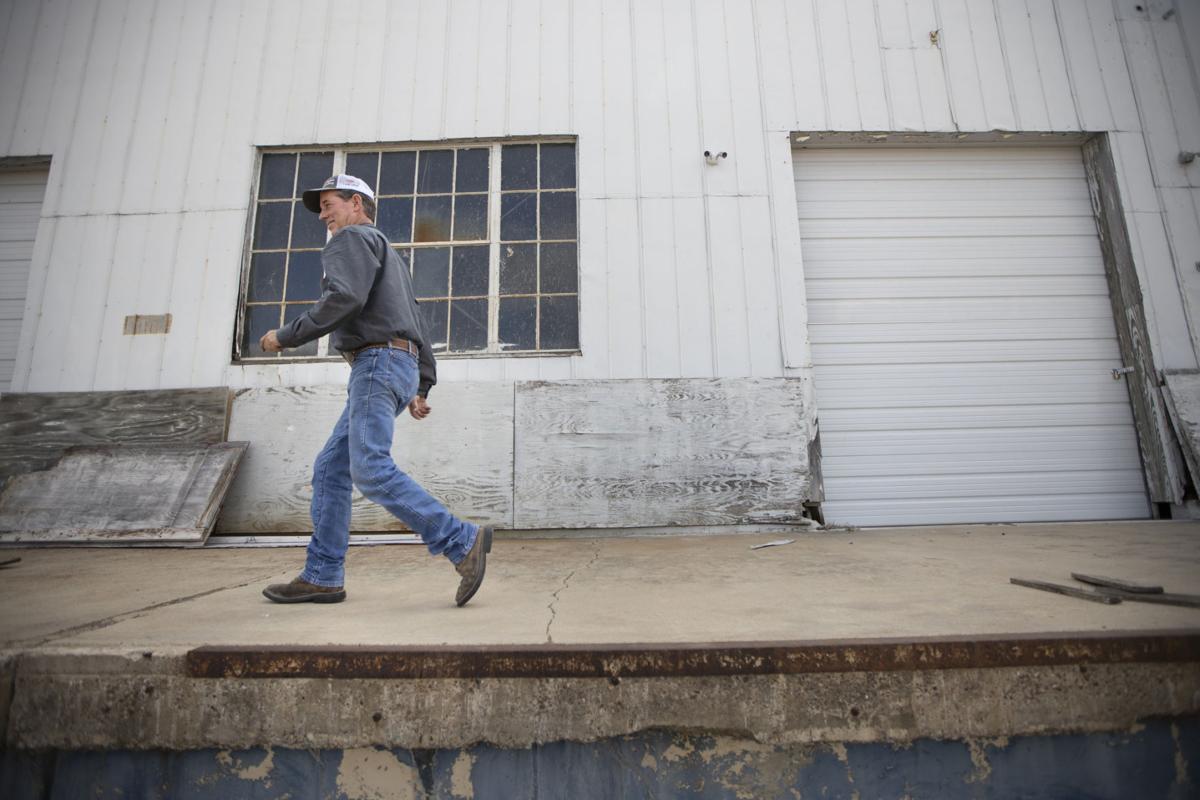 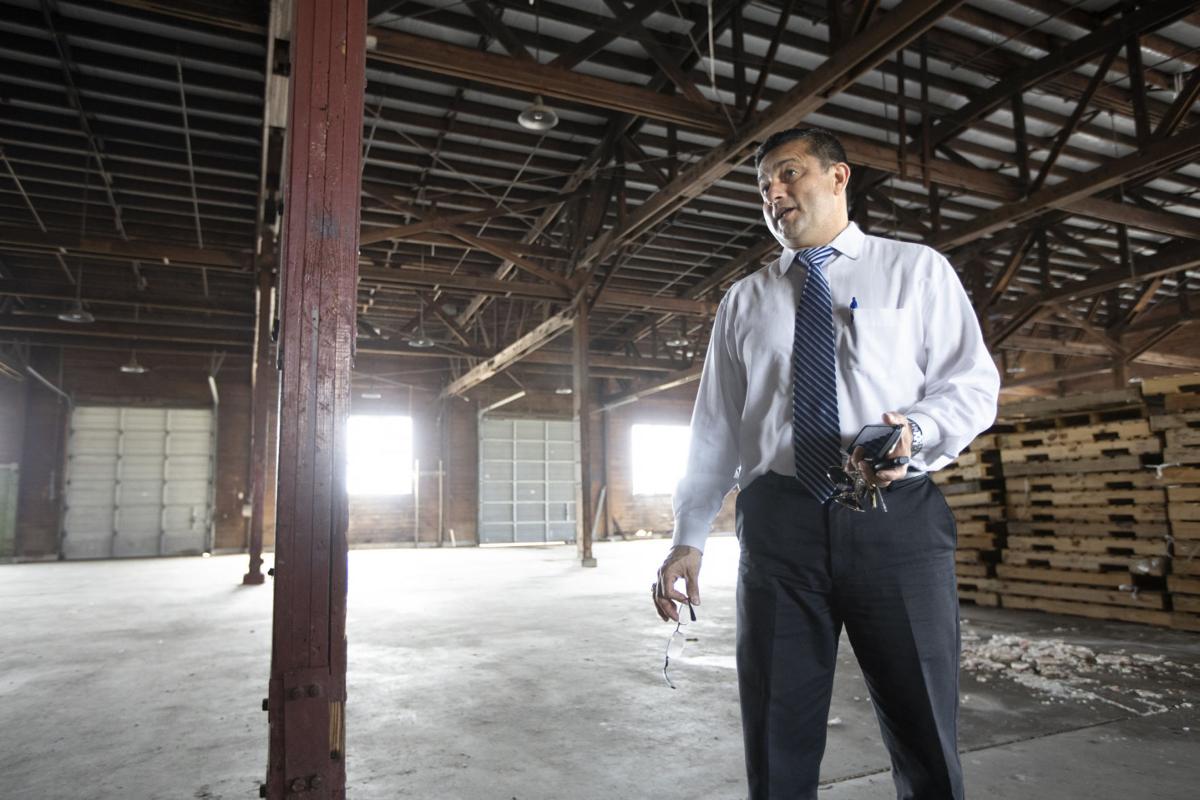 Victoria Regional Airport Director Lenny Llerena discusses the state of the Fisher Stevens building. The building on airport property was damaged by Hurricane Harvey. It has not been repaired. 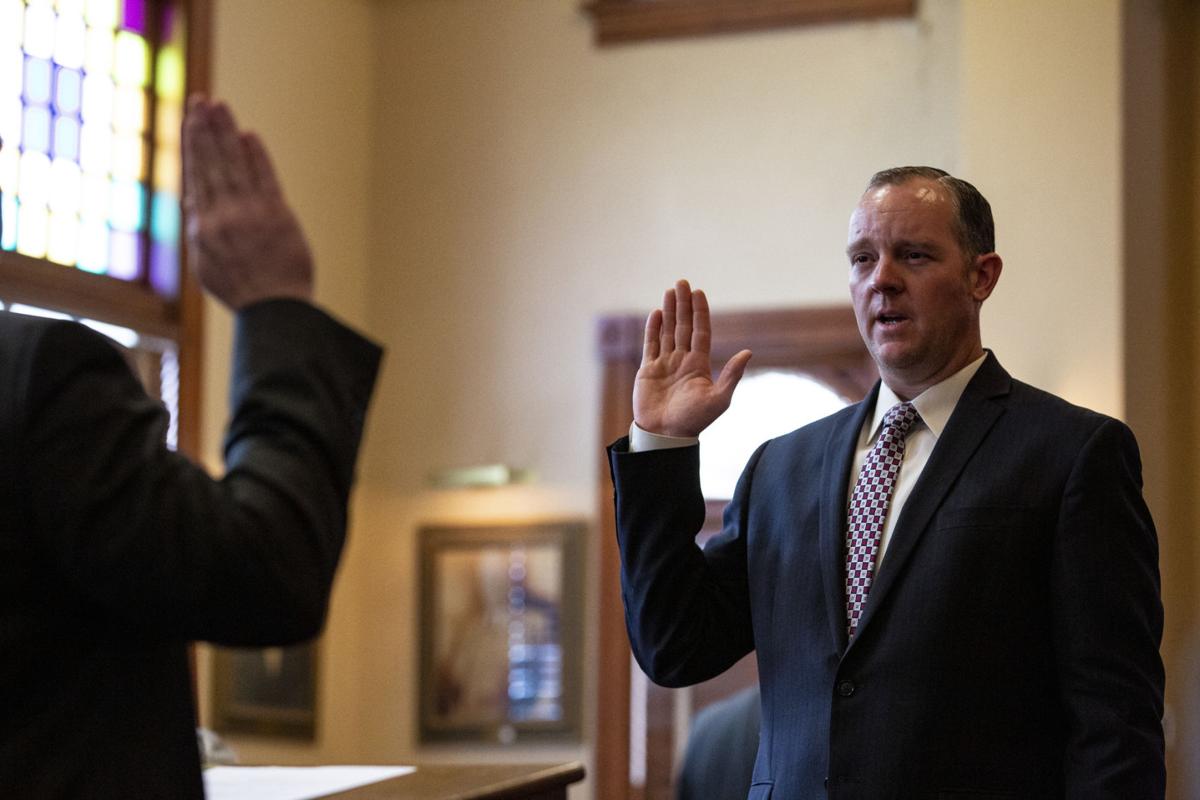 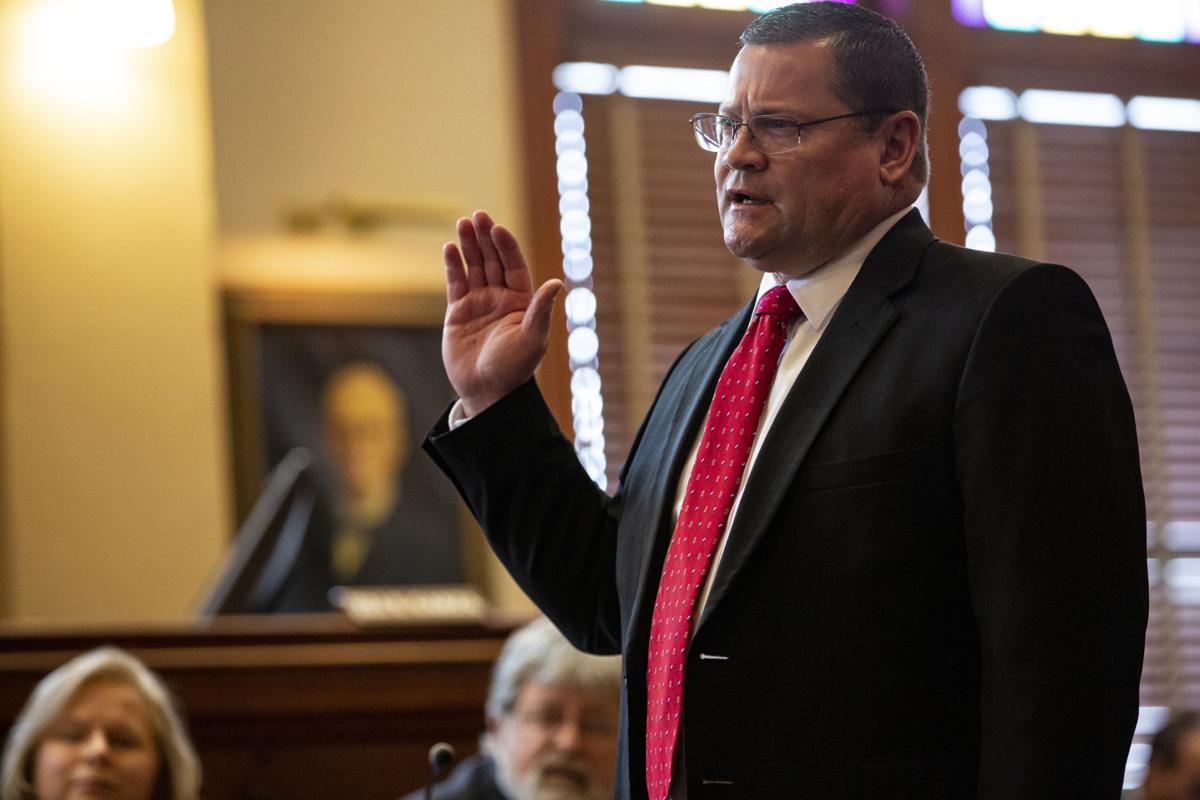 Commissioner Kevin Janak is sworn in Jan. 1, 2019 in the 377th Judicial District Courtroom. 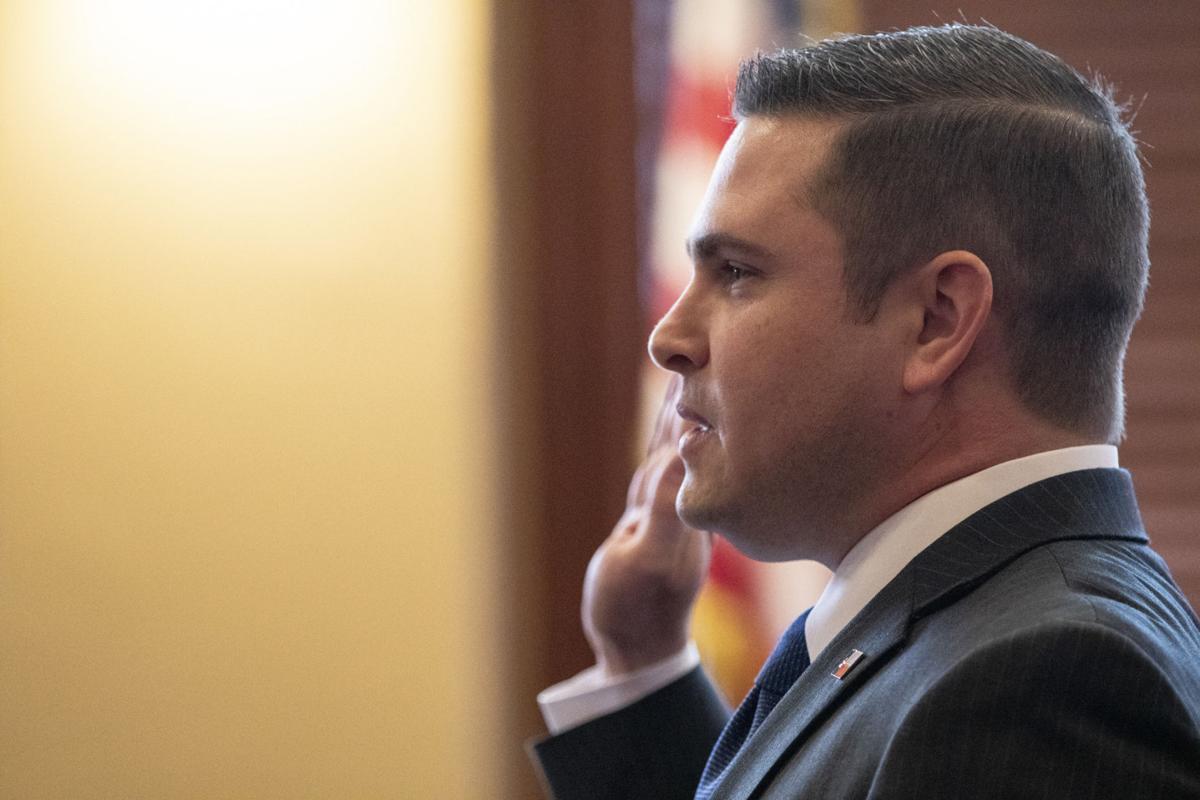 Victoria County Judge Ben Zeller is sworn in Jan. 1, 2019 for his second term in the 377th Judicial District Courtroom. 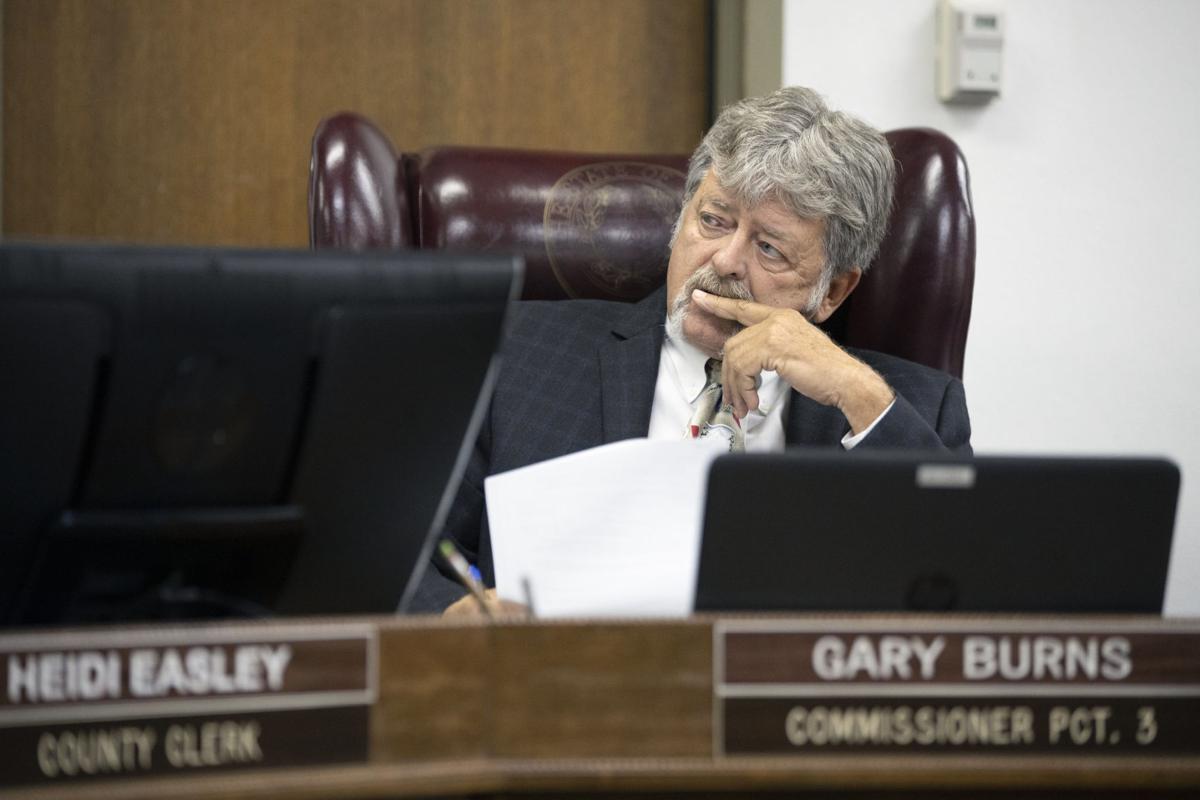 Gary Burns has been the only Victoria County commissioner calling for transparency about spending on Hurricane Harvey recovery work.

Victoria Regional Airport Director Lenny Llerena discusses the state of the Fisher Stevens building. The building on airport property was damaged by Hurricane Harvey. It has not been repaired.

Commissioner Kevin Janak is sworn in Jan. 1, 2019 in the 377th Judicial District Courtroom.

Four Victoria County commissioners are fighting so hard to cover up their Hurricane Harvey mess that they actually are questioning the need for an airport.

It would be laughable for a community of any size to not want an airport, but the commissioners seriously raised this question during their Sept. 3 meeting. Their reason for doing so was much more transparent than their recent approach to open government: They are angry some Victoria Regional Airport commissioners raised legitimate and important questions about how Harvey recovery money was spent.

The scary part is county commissioners control the airport. The good news is a growing number of Victoria businesspeople are watching closely the actions of County Judge Ben Zeller and commissioners Kevin Janak, Clint Ives and Danny Garcia.

Only County Commissioner Gary Burns is tackling head-on the serious issues raised about whether Victoria County received the insurance money it should have from the Texas Association of Counties and then spent those dollars properly through a no-bid contract with the Virtus Group, a little-known company from Olathe, Kan.

The latest revelation is that nearby Refugio County, which had the same association deal with Virtus as Victoria, is suing the insurance company for failing to properly handle its claims from Harvey. The lawsuit states the adjusters “conducted a substandard investigation and inspection of the properties, prepared reports that failed to include all of the damages that were observed during the inspections and undervalued the damages observed during the inspections.”

This lawsuit should give every Victoria taxpayer serious pause. In this light, how in the world can Victoria County commissioners not be asking similar questions? How can they be dodging the public’s concerns?

Burns stated the obvious during the Sept. 3 meeting: “I think we owe the taxpayers some answers, and we need them pretty quick.”

To that, Zeller, Ives, Janak and Garcia turned a deaf ear. More than that, they went on later in the meeting to attack airport manager Lenny Llerena for landing a $2.1 million grant to repair the runway and taxiway. The grant would pay 90 percent of the cost with the county matching only 10 percent.

The Victoria airport has a runway longer than most of its counterparts. That runway allows the airport to get a military contract for test flights and could lead to significantly bigger deals in the future. Already, a Texas Department of Transportation study showed, the airport yields an economic impact of 272 jobs, an $11.7 million annual payroll and a $42.3 million economic output for the region.

Yet, Zeller said of the airport, “From a financial point of view, the return on investment is not there.”

Here’s some basic math for the young county judge: The airport finished last year $60,000 in the black – and produced $42.3 million in economic output. That is the definition of showing a return on investment.

This is the crux of why businesspeople with common sense are rising up against the county commissioners. The questions about Harvey spending arose from business leaders on the airport commission tasked with making the airport profitable.

They see the potential of an airport run the right way for economic development and not as a source of cheap land for soccer fields, gardens and skeet shooting. Despite years of neglect and poor county commission management, the airport remains a tremendous asset for Victoria County and the region.

Business leaders understand that Caterpillar and other industry would not have moved here without a Victoria airport. They also know about good business practices for dealing with insurance claims and getting competitive bids for work to be done.

All the county commissioners seem to understand at this point is a desire to make the questions go away. Seemingly out of desperation, Ives asked Llerena whether the county could just give the airport back to the federal government.

If the county commissioners aren’t up to their jobs, it’s not the airport they need to give back.

After months of negotiations, it appears the Texas Mile and the Victoria Regional Airport are close to a new contract for the popular timed sp…

By exploring several opportunities and reading between the lines, Vinicio “Lenny” Llerena, the Victoria Regional Airport manager, saved the tr…

By exploring several opportunities and reading between the lines, Vinicio "Lenny" Llerena, the Victoria Regional Airport manager, saved the tr…

The Victoria Regional Airport has lost hundreds of thousands of dollars during the past three years.

There are a lot of controversial challenges facing the county. One of the most recent is the matter of leases at the airport.

Victoria County commissioners spent millions on repairing buildings after Hurricane Harvey, but they are just learning they still have roofs t…

Yes there is much the reading public can do. We can demand of Chrus Cobler that he employ reporters who accurately report. I attend/watch county meetings and shake my head in this "reporting". For instance the topic of airport closing was so taken out of context as to be laughable. The airport is a money pit and we can start with Linney our $150,000 a yr manager. Does his "talent" give us hope of profitability? Yes. The reason the airport is on the Aggrevate's radar today is filler. Cobler ran out of real news so he enlisted an old County Commissioner to breath life into a dieing paper. Good luck to the Victoria paper as it continues to stir and create news. Too bad all of its new rookie writers could not have had an opportunity to land a real learning position.

This is what our "real" reporters and other journalists regularly accomplish. Thanks for reading. "Victoria Advocate wins top honors in Texas Press Association contest" and "Texas journalism group names Victoria Advocate newspaper of the year."

Very well said, thanx. Is there anything We The Sheeple can do to apply pressure so this doesn't just quietly fade away?

Thank you. We encourage you to contact your county commissioners and to submit a letter to the editor on the subject. This may be emailed to letters@vicad.com. You also could contact state. Rep. Geanie Morrison and/or state Sen. Lois Kolkhorst.