Disgraced Congressman Blake Farenthold left his high-paying lobbying job in much the same way he arrived: with zero accountability to the public that pays him. 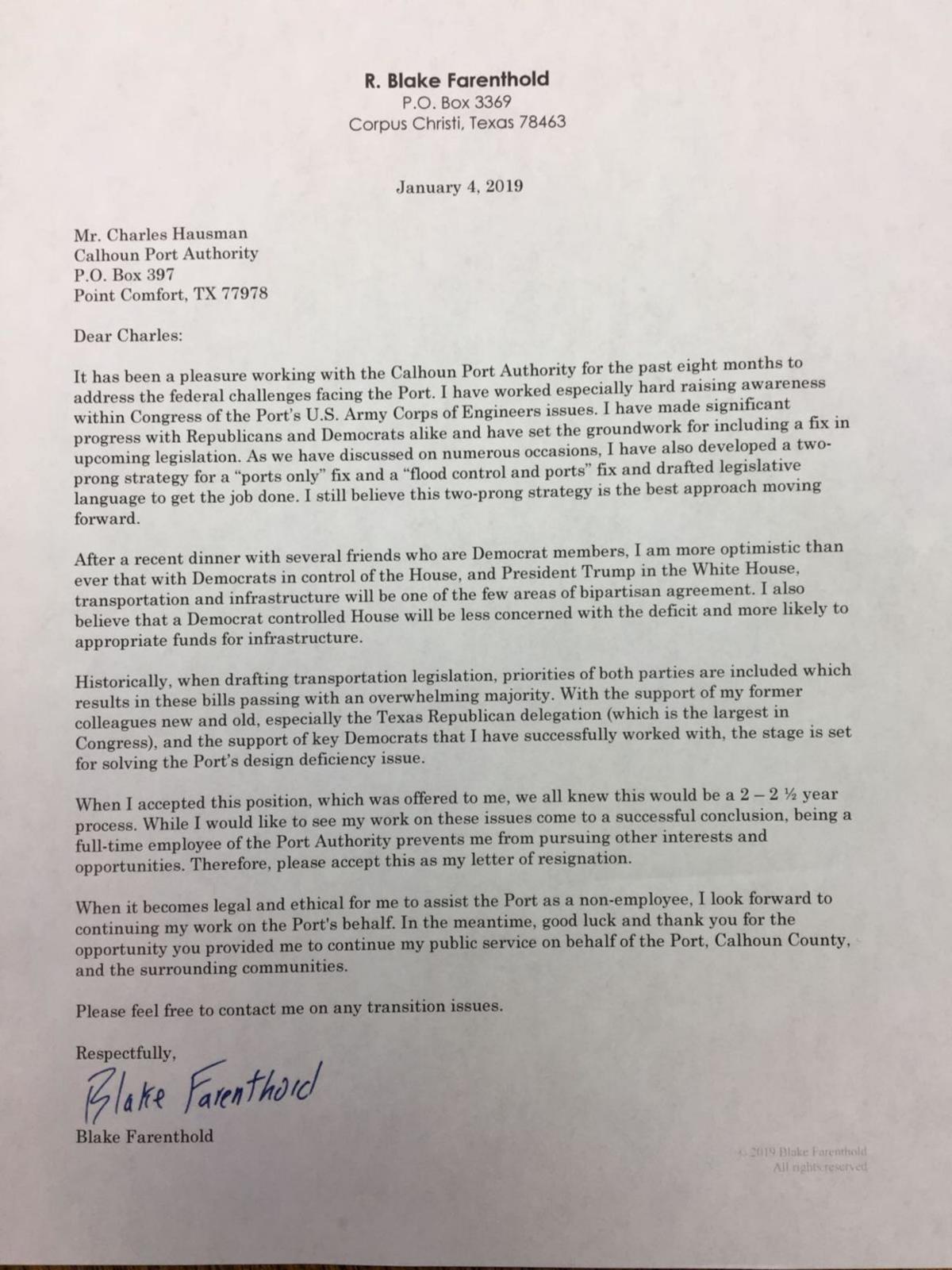 In his resignation letter earlier this month, Farenthold used the old political tactic of quitting and declaring victory. With absolutely no facts to support his claim, the former congressman said he had “made significant progress with Republicans and Democrats alike” in advancing legislation that would land the Calhoun Port Authority more federal funding.

As he has done since being hired May 9 by the port for $160,000 a year, Farenthold would not answer any questions from the public. He wouldn’t say why Congress, which had shunned him amid an ethics investigation, would be inclined to help him in any way. He also wouldn’t say why he was now leaving the lucrative and cushy port post.

The elected port board also continues to not answer to the public. Board members have never adequately explained why they created the position for Farenthold a month after he resigned under pressure from Congress. Farenthold’s resignation hasn’t changed their silence.

Board members still need to acknowledge they violated the Texas Open Meetings Act in hiring Farenthold without any prior notice to the public. If they don’t do this, then the public has no assurance the port won’t continue to operate in secret.

That is why the Victoria Advocate’s Opens Meeting Act lawsuit remains pending. Unfortunately, the port board has chosen to spend – so far – at least $80,000 of the public’s money in legal fees fighting the public notice requirement rather than simply doing the right thing as elected officials.

The board also is on the hook for the legal fees incurred by the newspaper, which sued on behalf of the public’s right to know. The Legislature wrote this provision into the law to give the people a fighting chance to legally challenge open-government violations. Sadly, elected officials too often use the deep pockets provided by spending the taxpayers’ money to fight the public’s right to know.

With Farenthold’s resignation, this presents an opportunity for the port board to quit spending good money after bad. Board members need to stop the charade that they properly hired Farenthold and instead move forward in the best interests of the Crossroads region. The Calhoun port is too important of a public asset for the board to continue to use it for private gain. As previous Advocate reporting exposed, board chairman Randy Boyd used Farenthold to further his private dredging company.

In Farenthold’s letter, the erstwhile congressman wrote that he regretted leaving his job unfinished, but it prevented him from “pursuing other interests and opportunities.” At the end, he curiously added a copyright claim to the letter, as if he had composed some great literary work rather than a disingenuous dodge for escaping a pay-for-play scheme that had blown up in his face.

The port’s executive director, Charles Hausmann, used the copyright claim as an excuse for not providing the resignation letter to media outlets that requested it.

Instead, the port made the letter available only to those who came to its Point Comfort offices to “inspect” it.

Of course, that delay tactic didn’t stop the Advocate. Similarly, the port board will be forced eventually to start operating in the public’s interest. If current board members won’t do that, a jury surely will eat their lunch if the newspaper’s open-government lawsuit goes to trial.

Now is a critical time for Calhoun residents to step forward to stop the out-of-control board. The filing period is open for candidates to fill three board seats. In the past, few residents knew about the board, and elections were routinely canceled because incumbents ran unopposed.

Calhoun residents have until the filing period closes Feb. 15 to make sure that doesn’t happen again.

The May 4 elections will be a chance for voters to stand up for a government of the people, by the people and for the people. Special interests win all too often in Washington, D.C. Locally, the people have to seize their chance to change that.

To Run For Port Board

The filing period is open for candidates to get on the Calhoun Port Authority ballot to represent Precincts 2, 3, or 4. The last day is Feb. 15. Election Day is May 4.

Port chairman's grip on board goes back a decade