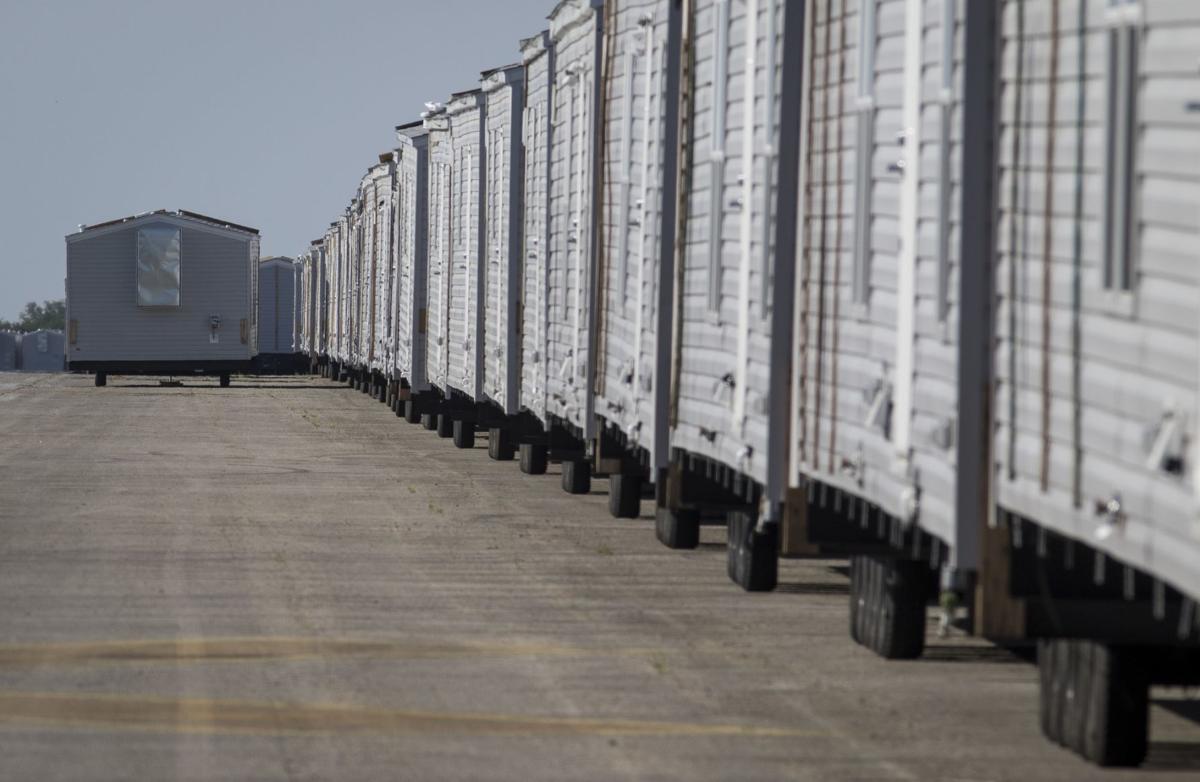 Nearly 2,600 FEMA RVs and mobile homes are stored at Chase Field in Beeville. The staging area serves the southern region of the United States. 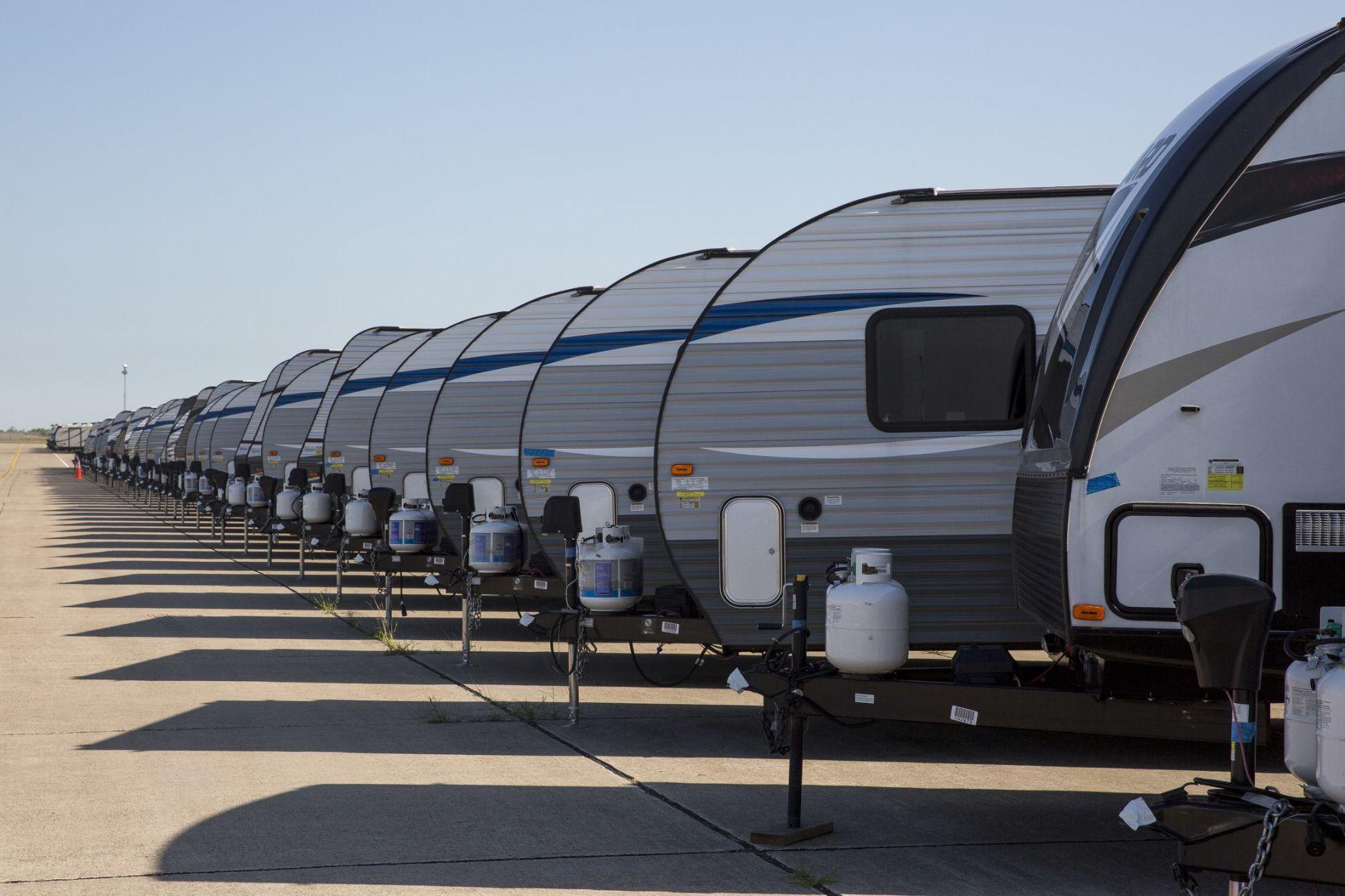 Almost 2,600 FEMA RVs and mobile homes are stored in April at the former Chase Field in Beeville. The staging area serves the southern region of the United States. 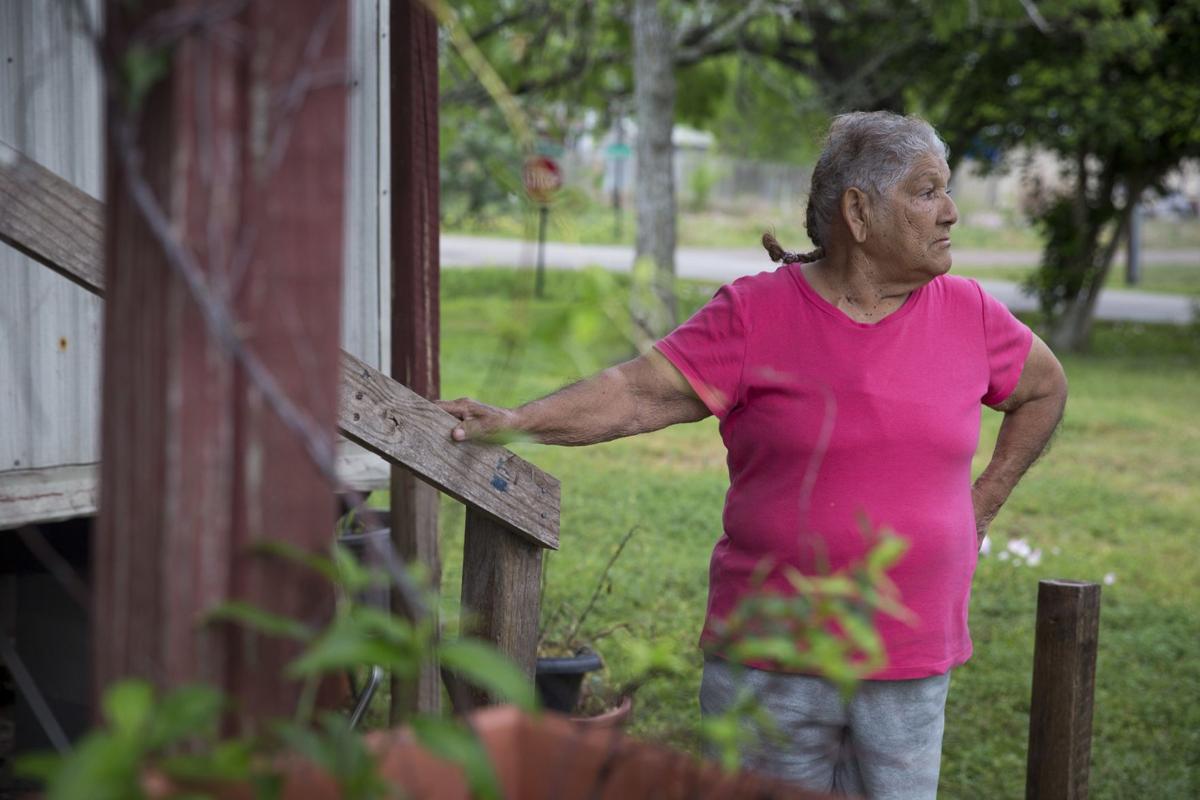 Petra Longoria, 78, stands outside her hurricane-damaged trailer home in Bloomington. Longoria has been displaced since Harvey and says FEMA has not helped her.

Nearly 2,600 FEMA RVs and mobile homes are stored at Chase Field in Beeville. The staging area serves the southern region of the United States.

When thousands of trailers and mobile homes sit unused in the heart of a region decimated by Hurricane Harvey, something is terribly wrong with this picture.

Sadly, the 2,600 trailers and mobile homes sitting on a Beeville runway are just the latest example of the federal and state government’s bungling of Hurricane Harvey recovery efforts. Housing advocates in the Crossroads will tell anyone who will listen that the need for adequate housing had reached crisis proportions before Harvey hit Aug. 25. The hurricane magnified that need by a factor of 10.

Yet, the Federal Emergency Management Agency lets homes sit unused while telling those in need that they don’t qualify for housing assistance. If so few qualify, why does FEMA have all these trailers stockpiled?

FEMA describes Beeville as a regional staging area for some unspecified future need, but that answer fails to satisfy anyone on the left or right of the political spectrum. At a cost of about $40,000 each, 2,600 trailers represent a total of $104 million. For those who argue the trailers need to be in the hands of those in need, this is a huge waste. For those who argue the government shouldn’t provide housing, this is an even bigger waste.

Compounding the waste is the knowledge the federal government auctioned off disaster-response trailers at fire-sale prices just before Harvey hit, according to an Associated Press investigation. More than 100 2017-model FEMA trailers were sold during the two days before the Category 4 hurricane landed in the Gulf Coast for less than $5,000 apiece.

Experts in the mobile home business say such trailers should have a lifespan of 15-20 years and could be used for multiple disasters during that time.

Almost eight months after the hurricane, it’s painfully clear federal and state governments are not up to the challenge. That’s mind-boggling given how many disasters have hit the United States in the past few decades, but Crossroads people on the frontline agree: The government didn’t start planning for the hurricane until after it happened.

About a month after Harvey, Gov. Greg Abbott announced a new approach to recovery efforts that would let local officials lead the way. That never materialized in the Crossroads, as the Texas General Land Office’s local conduit, the Golden Crescent Regional Planning Commission, reported frustration with receiving any information or money.

Last week, the GLO announced its plan to distribute $5 billion in federal block grants for disaster relief. Houston has fought for more local control of the money and apparently will get a considerable amount in the form of grant money to the city and Harris County.

The Victoria region is in line to get $110 million, but the only local control is some of that money will be routed through the overwhelmed regional planning commission.

Although state and federal officials haven’t asked, the Victoria Advocate’s Editorial Board did, talking with those involved locally in helping those in need. On the front line in Victoria is the Long-Term Recovery Group. Although the group also was unprepared for Harvey, its members have worked tirelessly and compassionately to help since and to stretch the little money they have received as far as it can go.

The group recently received a grant to allow it to form a 501©3 and to employ a full-time director and part-time bookkeeper. With this structure and based on the work it already has done, the recovery group is the best option for handing GLO and other recovery money. Its members are committed to the effort and not distracted with running other programs, as is the case with Golden Crescent Regional Planning Commission.

For a community located in the heart of hurricane country, a strong and active long-term recovery group is a must. It’s too late to undo the damage inflicted on Harvey victims for the past eight months, but there still is time to do better.

Gov. Abbott proclaimed Harvey recovery efforts would become a model for the country, and indeed they have: a model of what not to do.

How To Get, Give Help

Contact Mark Longoria at mlongoria@myffc.com to learn how to become a member of the Victoria County Long Term Recovery Group.

Gov. Greg Abbott created his own disaster by completely changing how the state and federal governments respond to hurricanes.

Seven months after Harvey caused an estimated $180 billion in damage, only about 6,600 households statewide qualified for state-run temporary housing programs. That represents only 2 percent of almost 372,000 who were deemed eligible for some sort of help from FEMA.

Joe Michael Ramirez won't have a place to call his own for at least six months.

Officials have no details on housing relief

Neither federal, state nor local officials know exactly how or when Victoria's Hurricane Harvey victims could see housing relief despite the s…

State plans to set aside $110M for Crossroads' Harvey recovery

As part of a plan to distribute $5 billion in federal grant money to rebuild after Hurricane Harvey, the Texas General Land Office is planning…

Victoria remains unprepared for next hurricane

The city of Victoria’s water system is better prepared than it was when Hurricane Harvey struck almost two years ago. Unfortunately, that’s no…