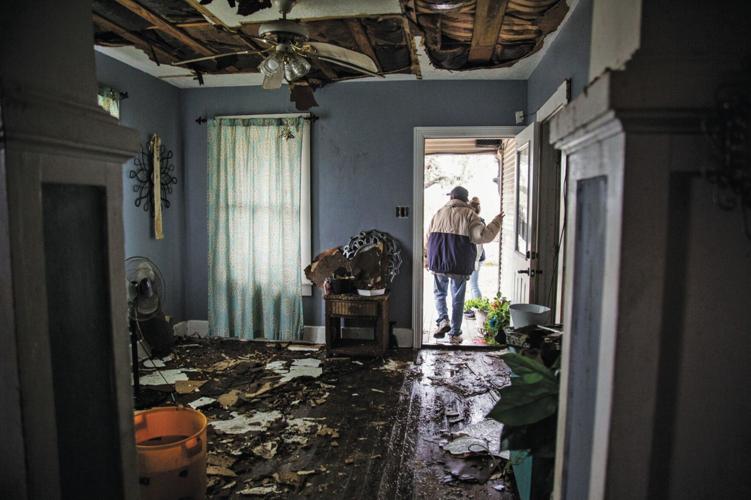 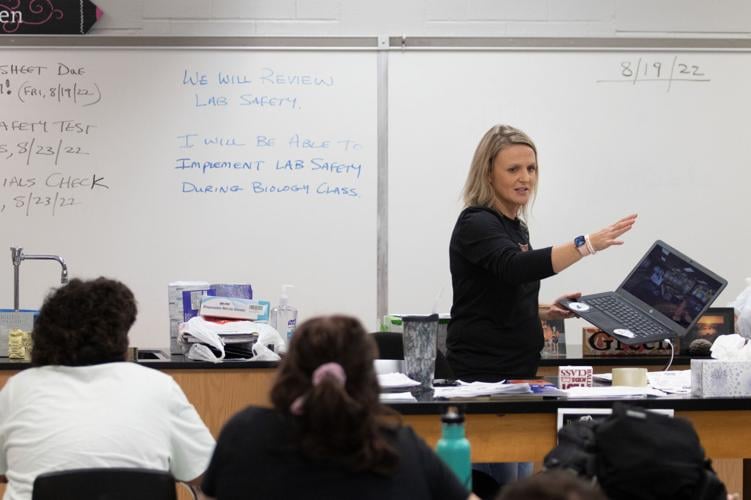 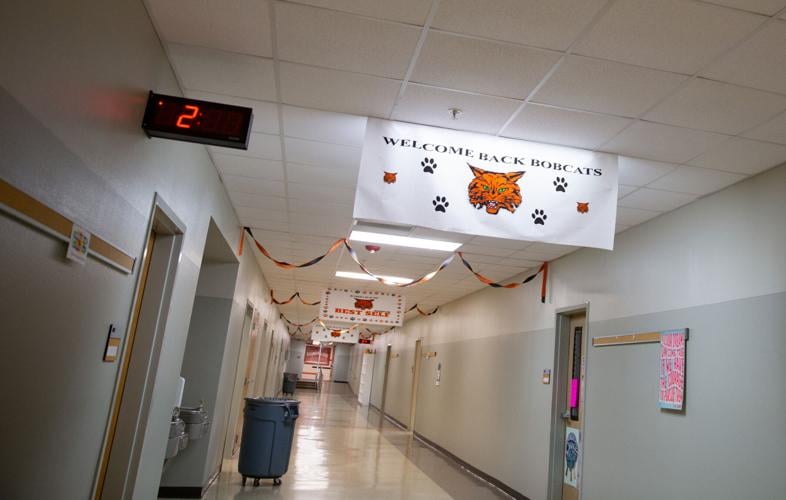 Current look of a hallway inside Refugio High School. 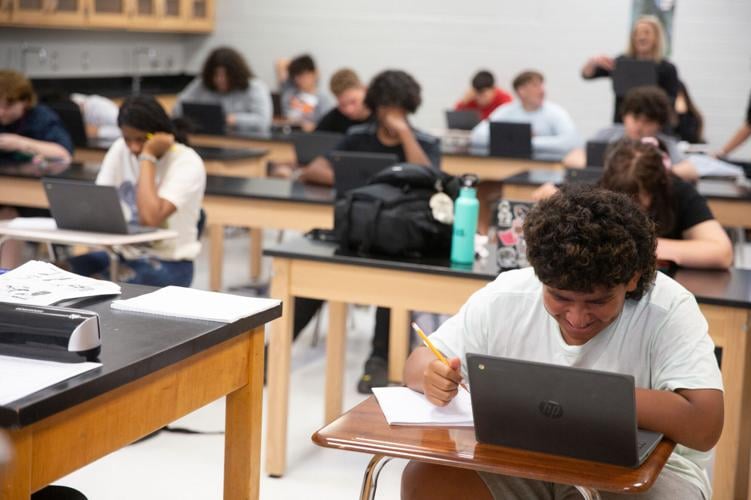 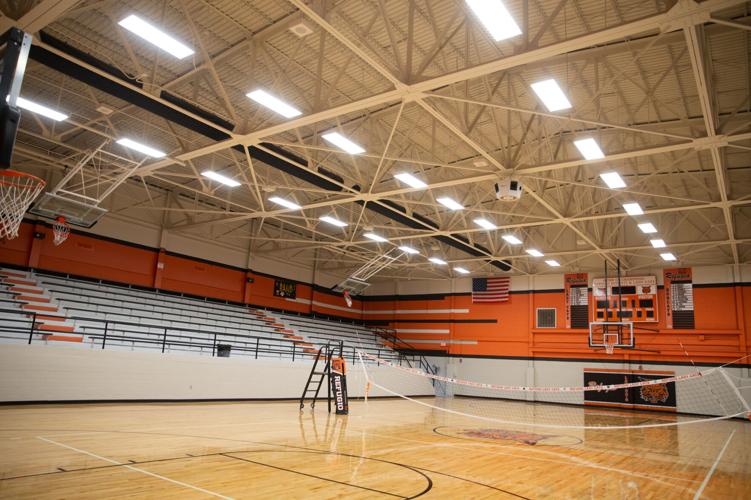 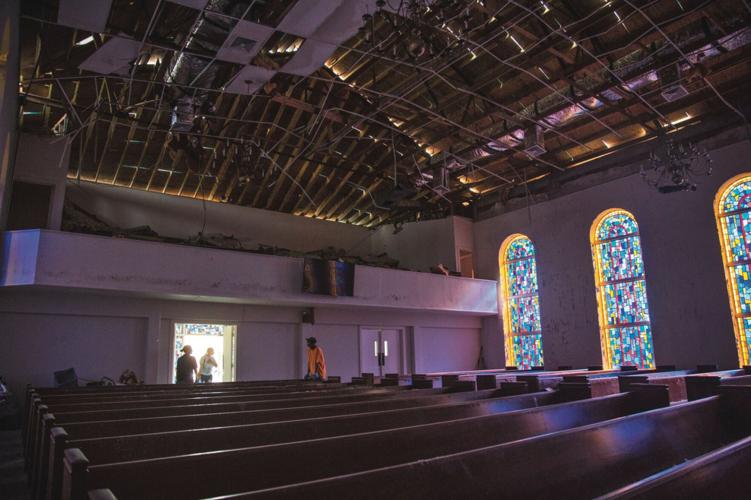 Volunteers walk through the Refugio First Baptist Church Sept. 15, 2017, which had its roof temporarily patched after it was torn off by Hurricane Harvey. 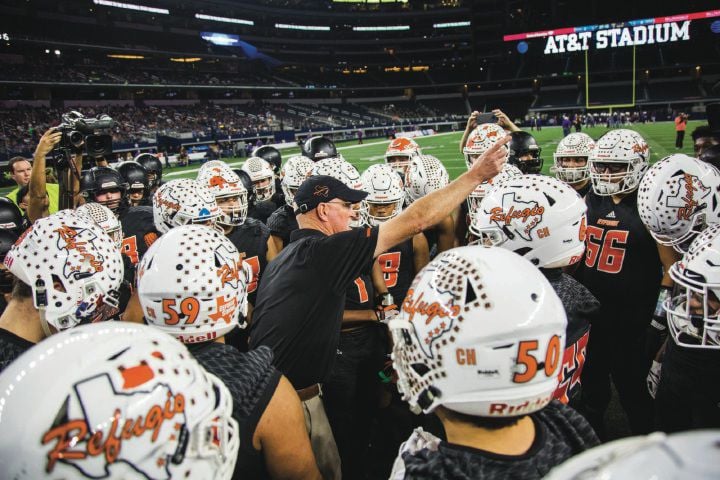 Refugio head coach Jason Herring talks to his team before the start of the 2017 Class 2A, Division I state championship game at AT&T Stadium in Arlington. 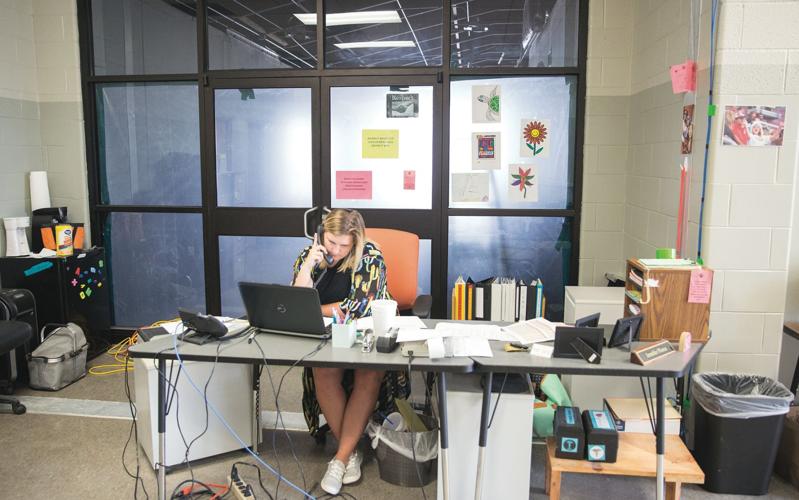 Jennifer Flores, an attendance clerk, answers the phone in a temporary office at Refugio High School in 2017. The auditorium behind her had severe mold damage and was stripped and rebuilt before it could be used. 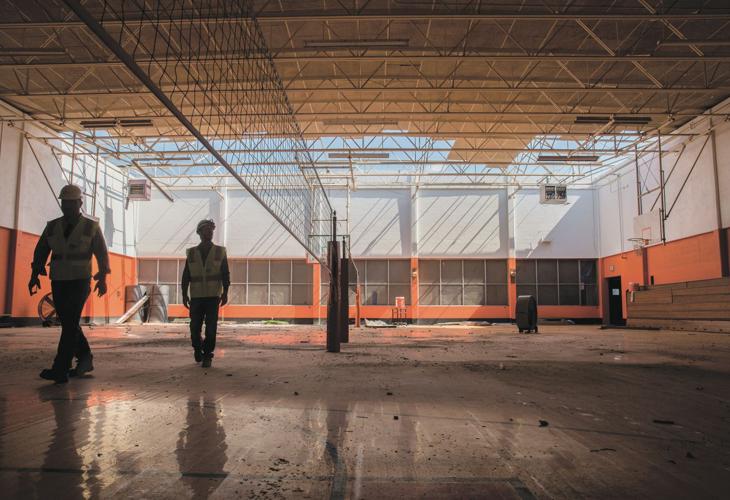 Electricians walk through a gym at Refugio High School in 2017 to assess the damages cause by Hurricane Harvey. 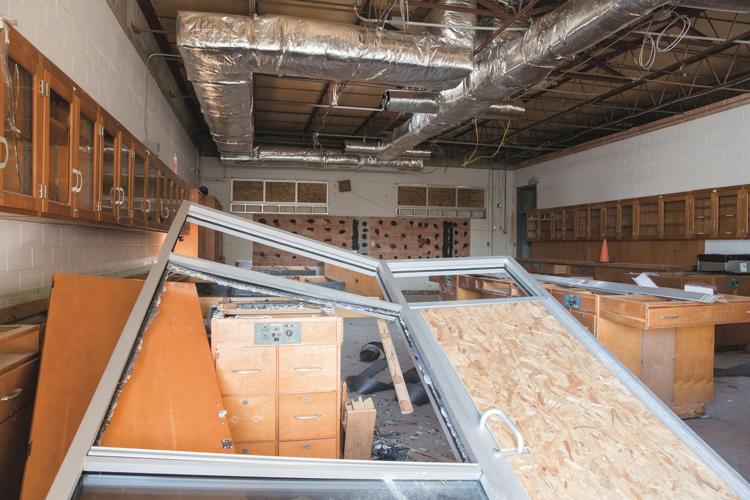 Current look of a hallway inside Refugio High School.

Volunteers walk through the Refugio First Baptist Church Sept. 15, 2017, which had its roof temporarily patched after it was torn off by Hurricane Harvey.

Refugio head coach Jason Herring talks to his team before the start of the 2017 Class 2A, Division I state championship game at AT&T Stadium in Arlington.

Jennifer Flores, an attendance clerk, answers the phone in a temporary office at Refugio High School in 2017. The auditorium behind her had severe mold damage and was stripped and rebuilt before it could be used.

Electricians walk through a gym at Refugio High School in 2017 to assess the damages cause by Hurricane Harvey.

REFUGIO — In Refugio, the last week of August 2017 divides time — before the hurricane and after the hurricane.

Five years ago, the rural town of about 2,700 began to feel the outer bands of Hurricane Harvey, at that point a Category 4 hurricane with sustained winds around 130 mph.

On Aug. 26, the storm’s eyewall made its first landfall in the United States, thrashing Aransas County’s barrier islands with 145-mph gusts of wind.

It moved northwest, slicing through Refugio County before it weakened and looped around toward Victoria and the Gulf of Mexico, eventually making another landfall in Houston and a final one in western Louisiana.

By that time, Refugio’s residents had begun their still ongoing recovery.

At the beginning of that last week in August, Katie Green was busy. The biology teacher at Refugio High School was caught up in planning birthday parties, the back-to-school rush, and a pregnancy.

But her focus changed on the 24th.

That morning was a teacher meeting with Melissa Gonzales, the Refugio school district’s superintendent, who had started her job earlier in August.

The meeting started off like usual: The fast-approaching first day of class, a renovated campus, kids picking up their schedules.

By the end of the meeting, nothing was like usual — Gonzales was off to an emergency management meeting, where she learned that instead of a tropical storm or a weaker hurricane, Harvey was strengthening and heading straight for Refugio.

As Thursday came to an end, it was clear there wouldn’t be a normal school year or a birthday party over the weekend.

“All of a sudden it was just this abrupt switch to ‘secure your homes,’ ‘get your life together right now,’” Green said. “So by the time that they got out of that meeting on that Thursday, we knew.”

Officials ordered a mandatory evacuation for Refugio County, leaving residents with little time to get their affairs in order before the storm arrived. Some were unable or unwilling to evacuate.

Joe Rose, a physical therapist at the Refugio County Memorial Hospital, was initially one of those residents inclined to stay put.

“We boarded up the windows and everything we were supposed to do, we weren’t planning on leaving,” Rose said. “We stayed in the house, contemplating the storm coming, and once it started to hit — we lived back by some water — one of our neighbors came and told us that the river was supposed to crest higher than it ever had. So we decided to leave.”

He was too late. By the time his family got out of their house and a mile outside of town, they realized the storm was already hitting Refugio, and decided to turn back.

They initially took refuge in the hospital’s physical therapy wing, but when the floors and ceilings started moving, they moved to the more sturdier main building.

“It was pretty frightening at times. I had my whole family with me,” he said.

Gonzales had been able to get out of the storm’s path in time, and remembers the “disappointment” of seeing reports of devastated school campuses rolling in from Refugio.

“Someone posted about the smell of gas coming from the high school, then someone else posted our auditorium roof that was over in the Whataburger parking lot, and the storefront doors were blown in,” she said. “It was a sinking feeling that I knew, I knew at that moment that we faced an uphill battle.”

“Uphill battle” was right, 2,547 buildings in the county were damaged, including every building in the school district, which has spent $21 million recovering from the storm, Gonzales said.

They still aren’t finished. Construction on the high school’s auditorium — whose roof indeed ended up in a Whataburger parking lot — is still ongoing, and the football stadium is under repair, as well.

At one point, over 90% of the district’s students were technically considered homeless.

Jason Herring, the athletic director and head football coach, said he remembers feeling a sense of guilt while waiting to get home after evacuating.

“My initial instinct was just to take care of myself, my wife and my kids, but in a weird way that felt a little selfish, just because I knew there were hundreds and hundreds or thousands of our families and kids that didn’t have the means to go anywhere,” he said. “...So you’re sitting there, wondering, ‘are our kids alive?’”

As Herring and his coaches got home, they started texting names into their coaches’ group chat.

There weren’t any details, since cell service and electricity were so limited, but each name meant a coach had made sure that kid was alright. They might not have had a house anymore, but at least they were alright.

There was an immediate urge to try and return to some sense of normalcy for Refugio’s kids.

“We had traumatized children, some who had been here and survived the hurricane, and some who had come back to find their homes destroyed,” Gonzales said.

Both of the district’s gyms lost their roofs, so Herring cemented poles into 5-gallon buckets and set up a volleyball net, so the volleyball team could start practicing again.

Refugio’s football coaches and players, who would go on to reach the state final that year, had already been working to help the recovery by unloading truckloads of donated supplies at a makeshift staging area and shelter in the district’s athletics facility.

By the time students returned to school on Sept. 18, teaching and learning were different.

Not only were teachers and students making do with damaged buildings and fewer resources, but they were also trying to rebuild their own homes and lives.

“I think the biggest issue was that all of us were full plate at school once we got back, but we got home and people were having to rebuild their houses, or rebuild their fences or clean up their yards,” Green said, adding, “We had tons of teachers, staff members that would literally go home and still didn’t have electricity.”

She remembers a conversation, months after the hurricane hit, when another teacher told Green she didn’t have gas at her house, because the storm had stopped it from passing necessary inspections.

“There’s people that lived with their roofs were failing and they had buckets, so they would teach all day, and then they would go home not to a safe haven, but to a whole other job,” she said.

As the post-impact weeks passed into months and eventually years, normalcy slowly began to return.

The gyms were rebuilt, so the Bobcats could have home games. Teachers started to have permanent classrooms, without having to move year to year. Refugio’s First Baptist Church, severely damaged in the storm, hosted worship and prayer.

“After the horrific nature of the storm and all that everyone was enduring, we ended up being very, very blessed,” First Baptist’s Pastor T. Wayne Price said. “We’re grateful.”

Price, and other residents and officials, maintained that amidst the awfulness of the storm, they can also see positives, at least in hindsight.

“The community rallied tremendously,” Price said. “The best qualities of Refugio, as happens in other places, was very evident during that first year really, but those first days and weeks was quite thrilling.”

The school district received a five-year grant for mental health programs, which Gonzales said has been impactful, and started an education foundation, which has raised tens of thousands of dollars for the county’s teachers.

Now, the youngest grades of Refugio’s schools are full of kids too young to remember the storm.

“I think that’s good. I’ll take that,” Green said. “I’ll take those little fresh babies that don’t have to feel that stress.”

First major hurricane to hit U.S. since Wilma in 2005.

Went from tropical depression to major hurricane in 40 hours

Losses in Coastal Bend – includes most of the Crossroads

Indirect fatalities – 1 – from a house fire in Aransas County

15,094 with major damage or destroyed

PART 4: Will small towns recover after Harvey? It's a matter of if, not when

“You like videos?” asks Robert Blaschke while sitting behind a large desk at the courthouse in Refugio, a once-booming oil and ranching county home to 7,300 people.