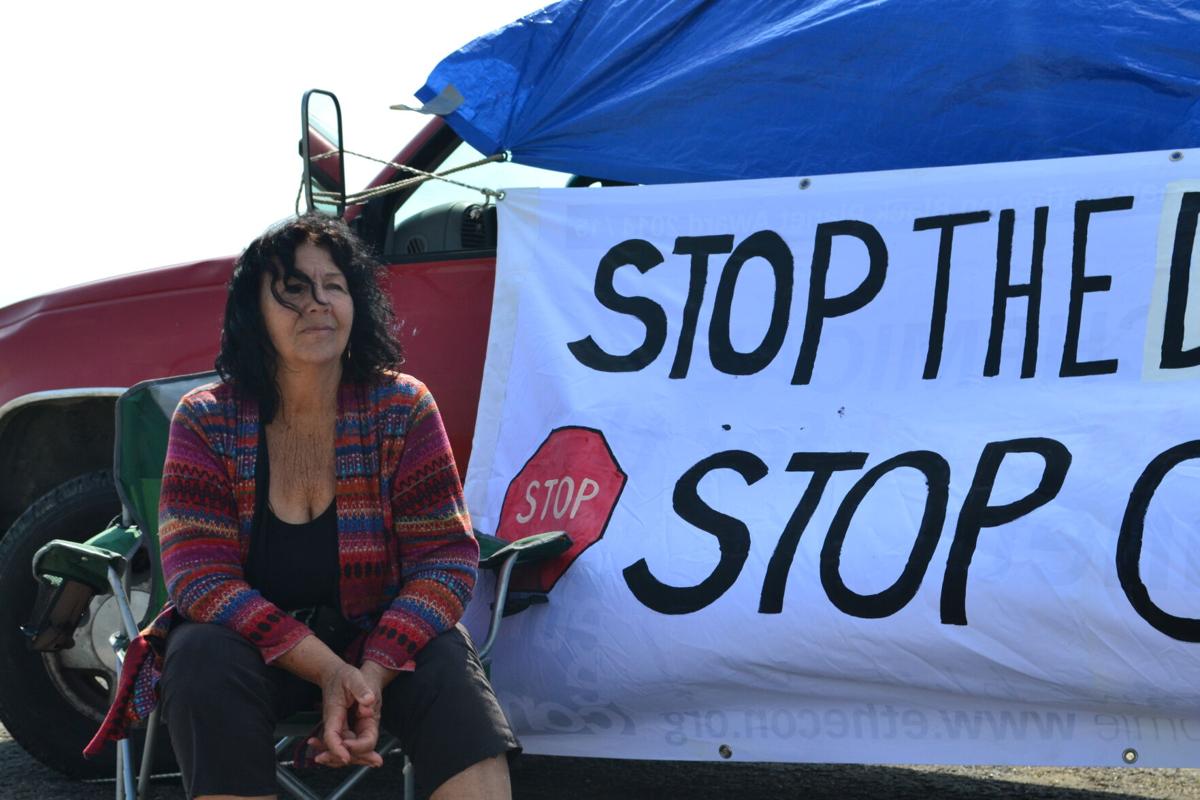 Environmental activist Diane Wilson sits in front of her truck Wednesday on the side of SH 35 in Point Comfort, where she started a hunger strike in protest of the Matagorda Ship Channel Improvement Project and Max Midstream Texas’ plans to export oil through the Calhoun Port Authority. 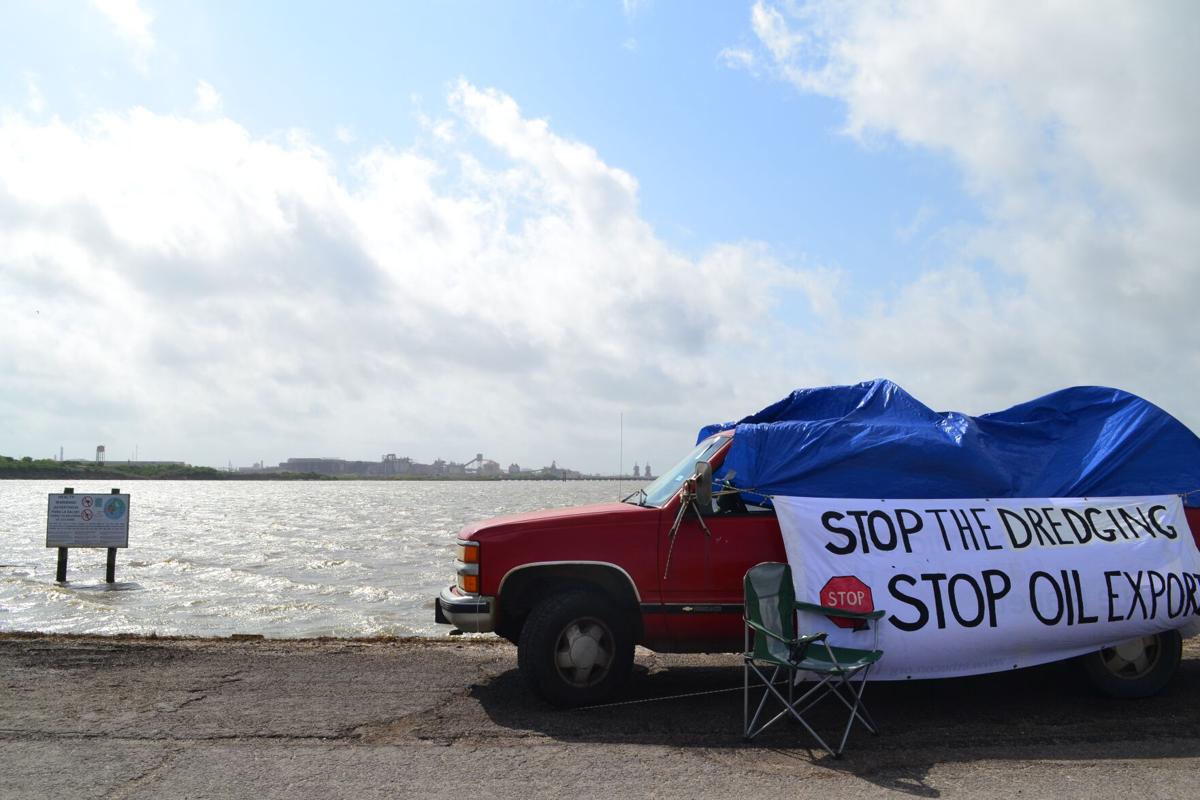 Diane Wilson parked her truck on the side of SH 35 Wednesday, near a sign that warns of mercury contamination in Lavaca Bay. Wilson is on a hunger strike in an attempt to stop dredging of the Matagorda Ship Channel and oil exportation through the Calhoun Port Authority. 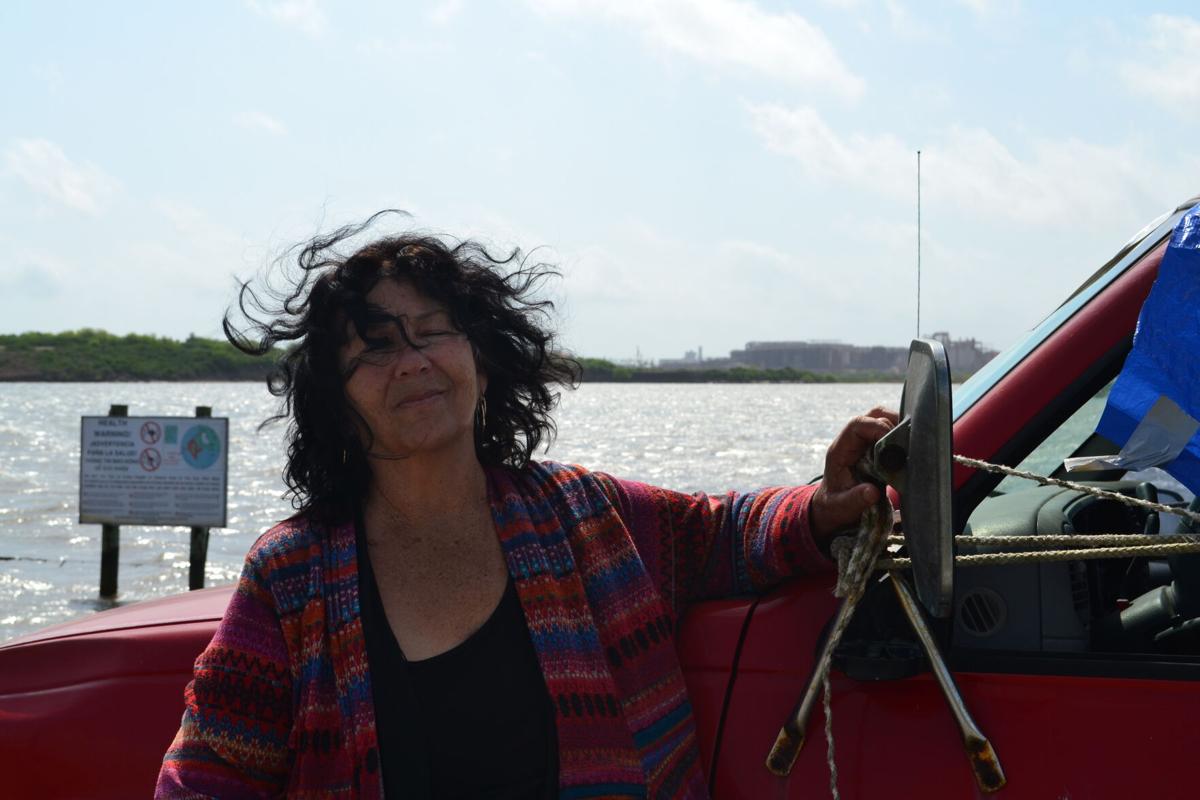 Environmental activist Diane Wilson stands in front of her truck Wednesday on the side of SH 35 in Point Comfort. She started a hunger strike in protest of the Matagorda Ship Channel Improvement Project and Max Midstream Texas' plans to export oil through the Calhoun Port Authority.

POINT COMFORT—Diane Wilson parked her truck on the side of SH 35 Wednesday morning with a large sign that read “Stop the dredging. Stop the oil export” in black, bold letters.

The longtime environmental activist hadn’t eaten for hours and said she doesn’t plan to anytime soon.

Wilson began a hunger strike along the waterfront at 8:30 a.m. to demand that President Joe Biden’s administration stop the Matagorda Ship Channel Improvement Project and reinstate a ban on crude oil exports to prevent companies, including Max Midstream Texas, from exporting oil through ports along the Texas coast.

Both multimillion dollar projects are intertwined and well underway in Calhoun County.

Through a public-private partnership with the port, Max Midstream agreed to invest $360 million in port infrastructure improvements, including financing the Matagorda Ship Channel Improvement Project that was federally authorized at the end of last year.

The investment was announced last October alongside Max Midstream’s plans for a $1 billion crude oil exportation project that will eventually enable up to 20 million barrels to flow to the revitalized Seahawk terminal at the port each month for export.

Wilson is urging Biden’s administration to declare a national climate emergency, which would allow the president to reinstate the crude oil export band that was lifted in 2015. She is among many environmentalists who argue that expanding crude oil exports will pose further risks to public health, the environment and the climate.

Edwards and Port Director Charles Hausmann did not respond to request for comment regarding Wilson’s hunger strike.

Hausmann previously told the Advocate that the widening and deepening project will expand economic opportunity for the port and surrounding areas.

The project will allow for larger vessels, including Suezmax and Aframax, to come into the port, which will enable businesses that use the channel to enhance economic productivity, he said.

“The port also anticipates that the project will lead the way to significant new investment in industrial infrastructure, as vessel traffic from a wide variety of regions, particularly those impacted by the Panama Canal Improvement Project, seek appropriate channels and facilities that are able to handle the increased vessel configurations,” Hausmann said by email.

The U.S. Army Corps of Engineers and Calhoun Port Authority are working to complete the pre-construction design and engineering phase by the end of the year, which will be followed by the construction bidding processes. The project is slated to be completed in 2023.

Wilson said there are no changes the Corps or port could make to the dredging plans for the ship channel that would satisfy her protest other than abandoning the project entirely.

The fourth generation shrimper’s biggest fear is that dredging to widen and deepen the channel will stir up mercury in the bay bottom’s sediment and cause further harm to the local fishing industry, she said.

From 1965 to 1981, Alcoa discharged inorganic mercury-laden wastewater into Lavaca Bay from its now shuttered aluminum refinery in Point Comfort. The Environmental Protection Agency declared the area a Superfund site decades later, in 1994.

After Alcoa permanently shut down in 2019, Max Midstream secured its position at the port for its operations. But the 450-acre Alcoa plant, 420-acre Dredge Island and portions of surrounding bays and waterways are still classified as a Superfund Site by the EPA.

One of the primary environmental concerns identified in the environmental assessment for the widening and deepening project was the possibility of mercury-contaminated dredge materials getting dug up during the dredging process.

When asked about that possibility at a recent meeting, Corps officials said they will follow all rules and regulations for contaminates and referred residents to the 211-page feasibility report and environmental impact assessment.

While the port will be responsible for the investigation, removal and disposal of any contaminates discovered during required testing, Alcoa will have to accept any mercury-contaminated sediment found on port property in accordance with a 2002 settlement, according to the document.

This is the eighth time Wilson has gone on hunger strike in protest of environmental, war and human rights issues, she said. Most recently, she went without food for 58 days in 2013 as part of a movement to close the Guantanamo Bay detention camp.

Hunger strikes have serious health risks, but Wilson said they been effective for her in the past.

“I’m really trying everything I can think of so that these industries can come back,” she said. “I don’t think it’s progress to give up the fishing industry for something like this. I’ll fight for it. I really will. This is my last stand.”

There's way too much money involved here for the responsible parties to cancel their plans because of a lady starving herself on the beach. Her action may be admirable or not, but IMO it won't accomplish anything useful, and there are far more pleasant ways to lose weight. I am curious though whether she'll literally starve herself to death rather than give it up. Not likely the Advocate will follow up and let us know.

Hi, sir! We recently published an update to this story. Linked here: https://www.victoriaadvocate.com/premium/environmental-activists-convene-at-lavaca-bay-to-oppose-crude-oil-exports-ship-channel-project/article_e79d8f7a-a5ec-11eb-b6c6-031ec6cf8629.html