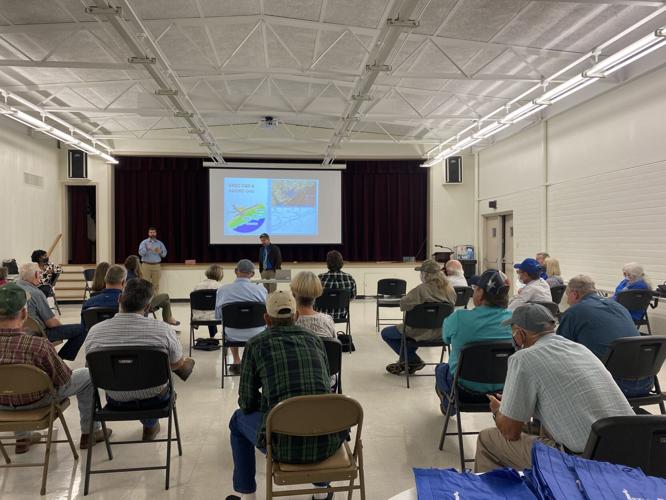 Officials with the Galveston District of the U.S. Army Corps of Engineers answer questions about the Matagorda Ship Channel Improvement Project Thursday evening in Port Lavaca. More than 25 people gathered at the county’s extension office for the meeting, which was hosted by the Lavaca Bay Foundation. 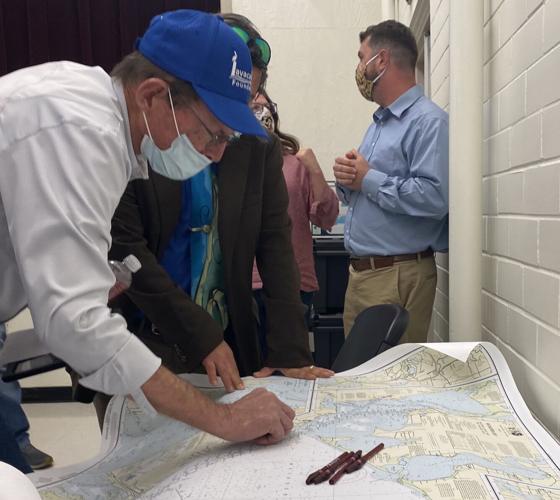 Coraggio Maglio, chief of hydraulics and hydrology for the U.S. Army Corps of Engineers Galveston District, discusses possible placements for dredging material from the Matagorda Ship Channel Thursday with a Calhoun County resident. 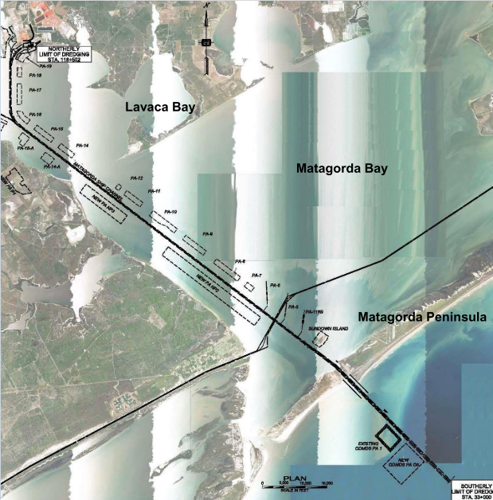 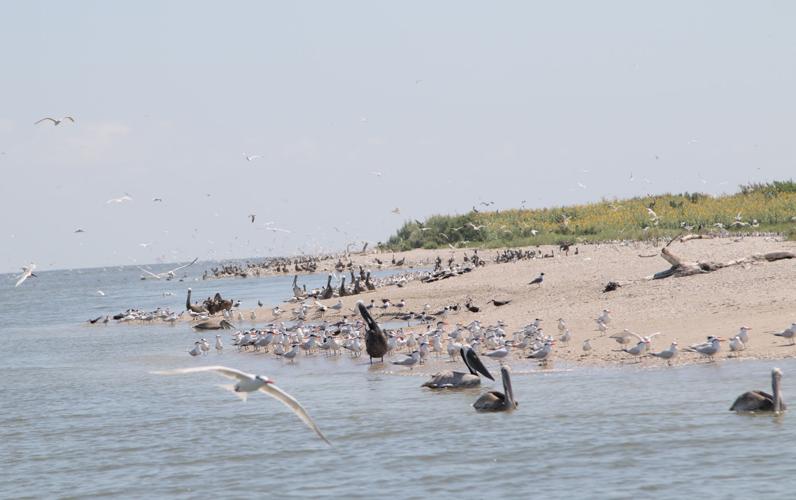 Brown pelicans, laughing gulls, oystercatchers, egrets and other birds flourish on Chester Island. The island was at one time reported to be 200 acres, but has eroded over time. 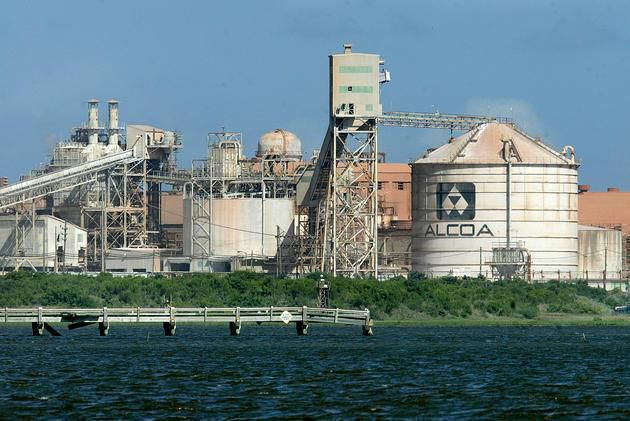 Inside, several residents and local officials gathered around to hear what the U.S. Army Corps of Engineers had to say about a massive undertaking to widen and deepen the Matagorda Ship Channel.

The Corps’ final Feasibility Report and Environmental Impact Statement for the project was signed in 2019. The federal government authorized the project at the end of last year when the Water Resources Development Act was signed into law.

On Thursday, the Corps stressed that they are under tight deadlines and cannot re-design the project but want to work with community members to ensure material dredged during the process is put to good use.

“Instead of doing hard, gray infrastructure, we’re trying to incorporate softer techniques, things that will last longer,” said Coraggio Maglio, chief of hydraulics and hydrology for the U.S. Army Corps of Engineers Galveston District. “It is something that actually does add a lot of value, especially when you are dealing with things like sea level rise and climate change.”

The Corps and Calhoun Port Authority are working to complete the pre-construction design and engineering phase by the end of the year, which will be followed by the construction bidding processes.

“Typically, when we go through an effort like this, we have a year, year and a half or two years to do what we’re doing,” Maglio said. “We’re condensing it down to 4 to 5 months so we’re tightening our timelines and working as fast as we can.”

Dredging of a 1,600-foot long sediment trap outside of the main ship channel entrance near Port O’Connor where an offshore sandbar is located is also planned, as well as the relocation of 16 pipelines.

To mitigate the project’s environmental impacts, about 130 acres of oyster reef habitat and a few acres of marsh will also have to be built. The locations for those mitigation projects have yet to be determined.

For decades, dredge material from the ship channel was placed in areas east of the channel. But the Corps has found that material placed in those locations primarily ends up back in the channel when it erodes, which leads to more maintenance dredging.

The Corps proposed several different placement sites, including Chester Island, south of the jetties on Matagorda Peninsula and areas west of the channel.

Formerly named Sundown Island, Chester Island is an Audubon Society bird sanctuary that was constructed in 1963 with sediment dredged from the channel and periodically receives material from maintenance dredging for the channel and Gulf Intracoastal Waterway.

The island provides critical habitat for several species, including the once endangered brown pelican, but is constantly eroding.

In coordination with Audubon, the Corps proposed placing about 2.3 million cubic yards of dredge material north of the island, which will significantly expand its size. Maglio said the north side is ideal because the sediment is less likely to return to the channel.

“We’re working with the U.S. Fish and Wildlife Service to ensure that the island is constructed so that it is not too big,” said Jeff Pinsky, chief of the environmental compliance branch for the Corps Galveston District. “As it turns out, rookery islands, if they get too big, can harbor mammal predators that are bad for the birds.”

The Corps proposed placing another 1.4 million cubic yards southwest of the jetties on Matagorda Island.

“That is going to be really, really useful for that beach because it is highly eroding,” Maglio said. “Some of our geomorphic simulations we’ve done have shown that the inlet is eroding so quickly that we could have a breach and we do not want that to occur. Placing additional sediment in that location adds to the resilience of the barrier island system, which is critical for safe navigation.”

The other proposed areas include six in open water west of the of the channel, one in the Alamo Beach area and one east of the channel near the Alcoa facility.

“The remainder of the volume is material that could go along the south shoreline of the bay, which the Corps believes could help rebuild some of the marsh habitat that eroded during Hurricane Harvey,” Maglio said.

Jan Regan, a Port Lavaca City Council member and local real estate agent, said she was concerned that material deposited south of the channel could plug up entrances to lakes and bays that are prime for recreation.

“I’m concerned that the spoils will eventually fill in that area where everybody uses what’s left of the beach, the crabbing bridge and the homes and everything,” she said. “We have a lot of marshland already there. The little bit that’s left for recreation and residential needs to be up for consideration.”

Maglio said the sediment should drift toward the shoreline, circulate and nourish lakes but will not be enough to plug them up.

“If we place material anywhere along the shorelines, we want to make sure that material is not going down Pass Cavallo and isn’t going to block off the entrance to Powderhorn Lake or any of the other regional assets you have here,” he said.

Grain size of the sediment usually determines where the material can go, Pinsky said.

One of the primary environmental concerns identified in the environmental assessment for the project was the possibility of mercury-contaminated dredge materials getting dug up during the dredging process.

Several people who watched the Thursday meeting via Facebook Live sent in questions echoing the concern.

Pinsky and Maglio said the Corps will follow all rules and regulations for contaminates and referred residents to the 211-page feasibility report and environmental impact assessment.

While the port will be responsible for the investigation, removal and disposal of any contaminates discovered during required testing, the Alcoa Corporation will have to accept any mercury-contaminated sediment found on port property in accordance with a 2002 settlement, according to the document.

“When it is something that is part of the superfund requirements, we would refer back to the EPA,” Pinsky said. “My job is to engage with the EPA to do whatever testing they say is required and then to coordinate the results with them and if anything did come up, to determine what that course of action would be.”

“We are acutely aware of the Superfund site right there.”