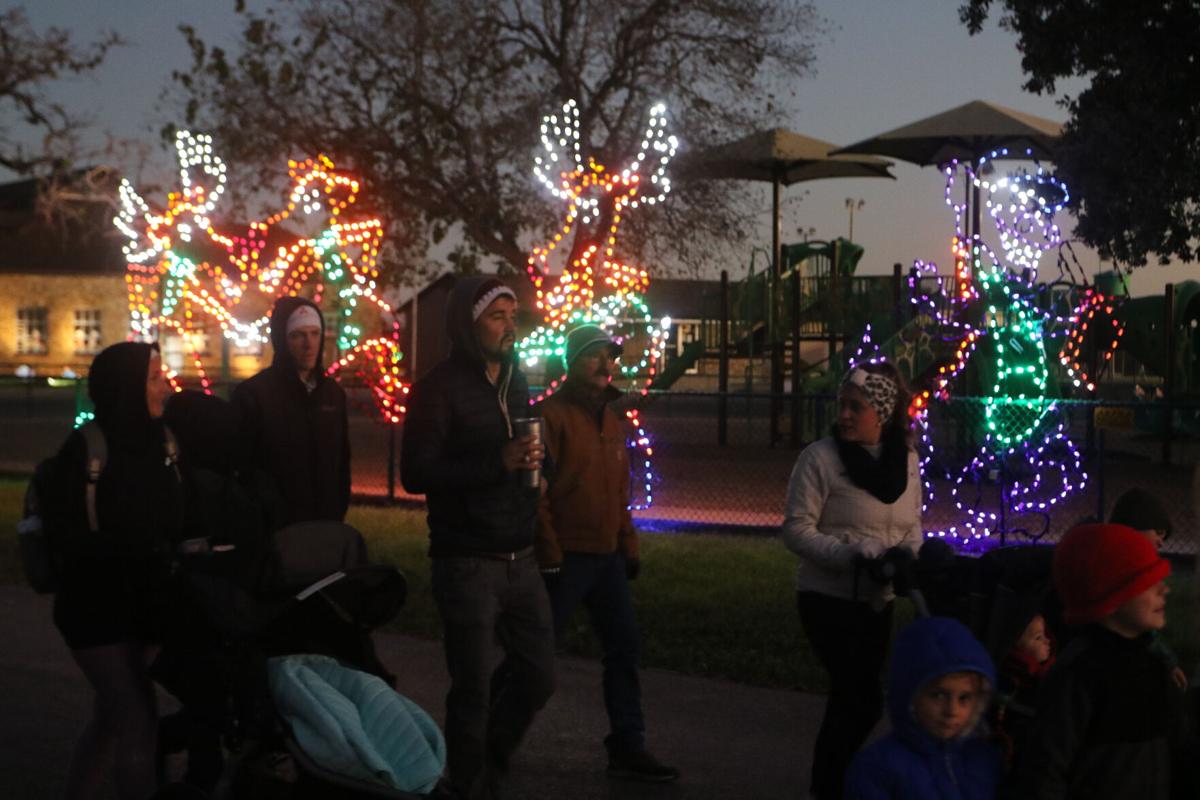 A group of people strolls through Cuero Municipal Park Sunday. 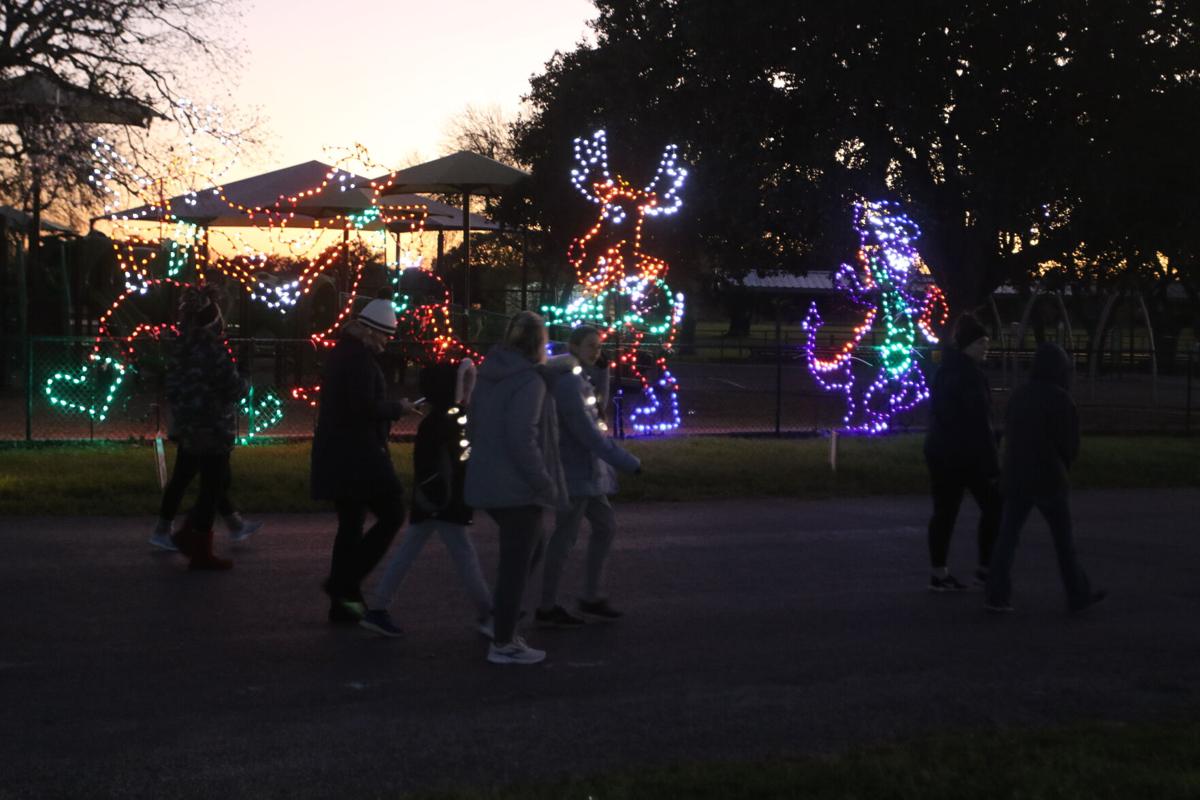 A group walks past a light display in Cuero Municipal Park Sunday. 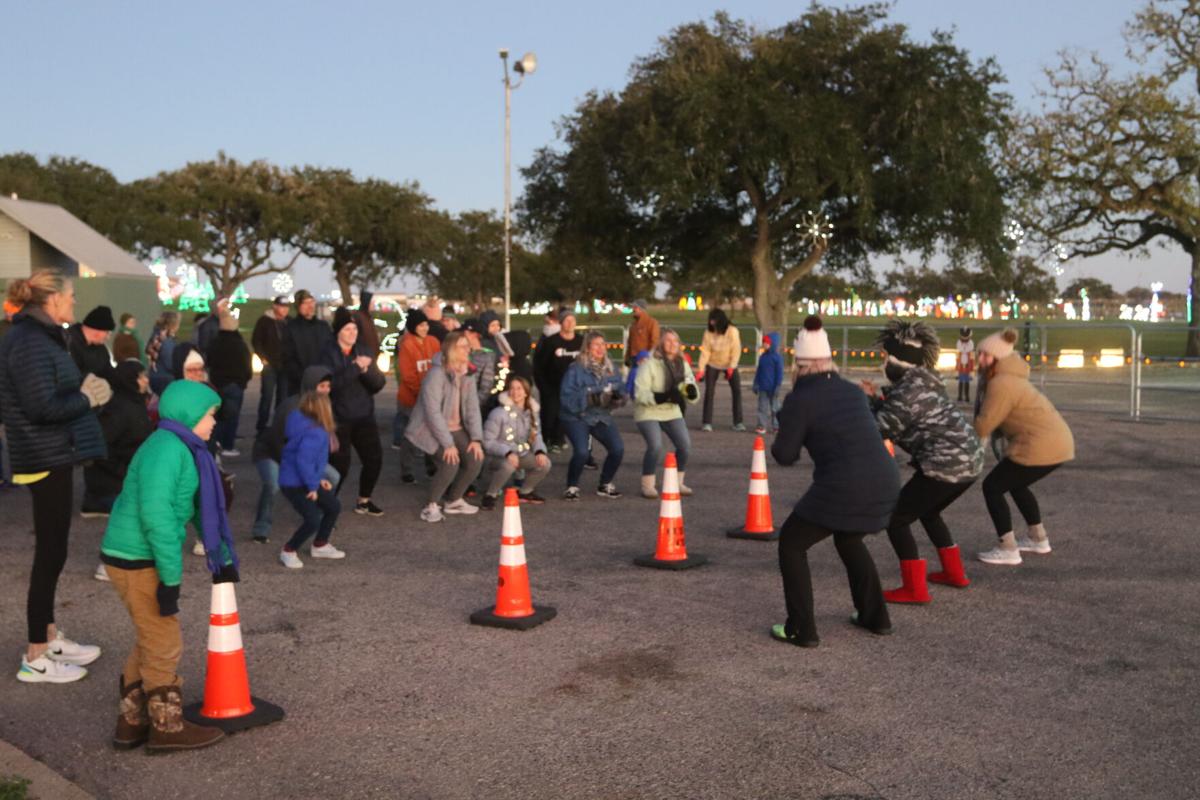 A crowd warms up for a walk through Cuero Municipal Park with some squats Sunday.

A group of people strolls through Cuero Municipal Park Sunday.

A group walks past a light display in Cuero Municipal Park Sunday.

A crowd warms up for a walk through Cuero Municipal Park with some squats Sunday.

CUERO — The temperature dropped low at Cuero Municipal Park Sunday, threatening to put a damper on a fun way for the community to ring in the new year.

For a moment, it seemed as though Cuero’s annual walk through the park would have a low turnout due to the cold, but as the sun set and the Christmas decorations blanketing the park lit up the night, several dozen people showed up to the pavilion near the park’s entrance.

At 6 p.m., those that showed up to brave the cold lined up and prepared. Standing in front of a massive green Christmas tree display, they got their blood flowing with high knees, squats and butt kicks. And then they were off on a brisk walk through the park, their path lit up with dazzling Christmas lights.

Cuero’s annual walk through the Christmas in the Park display had a big turnout despite less-than-hospitable weather conditions for South Texans.

This is the third year the event, hosted in conjunction by Cuero Regional Hospital and Cuero Wellness Center, has taken place, said Emily Weatherly, marketing and development director at Cuero Regional Hospital. Some participants were there to take in the lights, while others used the walk to kick start their fitness goals for 2022.

“Do a new year walk,” Weatherly said. “Have a fresh start. Come outside and get some fresh air, even though it’s freezing today.”

The walk itself is one mile, Weatherly said. The wellness center and hospital produced a special long-sleeve athletic T-shirt for the event, and proceeds from the T-shirt sales go directly to Cuero Christmas in the Park.

“It’s a huge initiative for our community every year,” she said, adding that the cost of the displays is high and that it’s important to help out.

Some, like Kathy Kueker, 71, of Cuero, used the walk as a way to jump start their fitness routines for the new year.

“One of my goals is to get involved and get some exercise done,” Kueker said. In 2018 she fell and broke her elbow and tore the tendon. Following the walk, she planned to start attending the Wellness Center again.

Others used the walk as a fun opportunity to take in the sights of Christmas in the Park up close with their loved ones.

“It’s a family tradition for us,” said Johnna Picard, 34, of Meyersville. Picard was there with her husband, brother, sister-in-law, and all of their children, she said.

The way the community gives to and maintains the displays in the park is a big factor in making it a tradition, Picard said, but the real draw is the most obvious one.

“The lights,” she said. “The kids love the lights.”

Weatherly agreed. “This year, being able to walk with your family, right as it’s getting dark, take photos of the displays, it’s just a fun way to be outside and get some fresh air.”

For Kueker, there was one display in particular she wanted to see up close, having driven through the park four times already.

“I actually have a display in memory of my daughter I lost in 2018,” she said. “That’s one of the reasons I want to be able to walk by and have an upfront, personal look.”

The display is an angel within a snow globe, Kueker said.

“I would rather her be riding with me, but I just wanted something in memory of her and it’s beautiful,” she said.