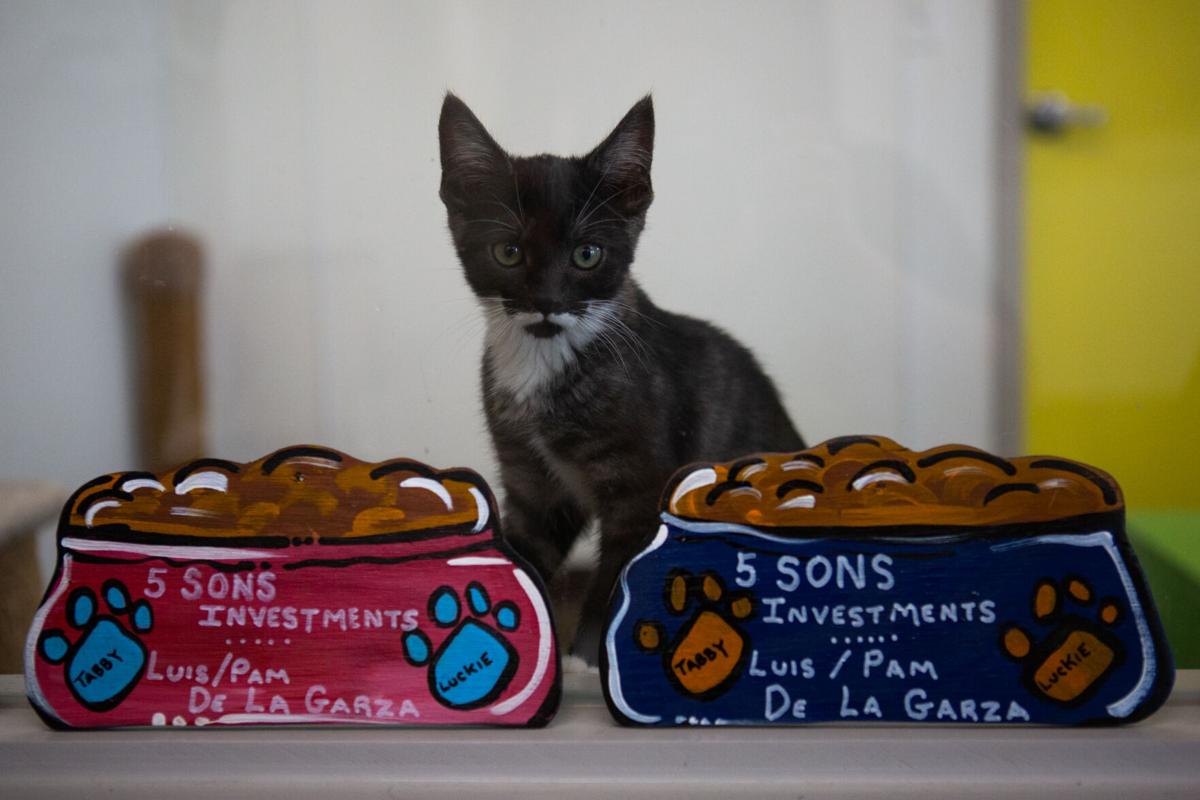 A kitten looks out from behind the glass of one of the cat rooms at the Calhoun County Humane Society on Tuesday. 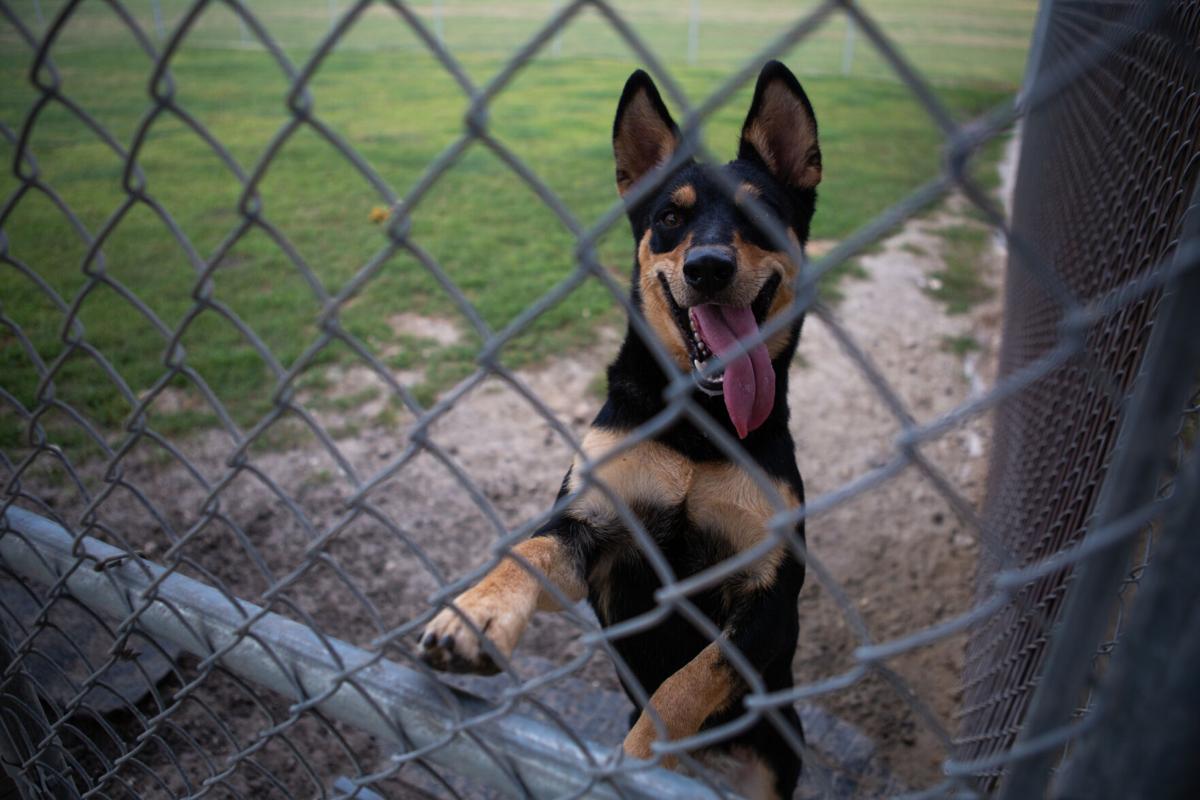 Dixie, a dog available for adoption, runs around a yard at the Calhoun County Humane Society on Tuesday. 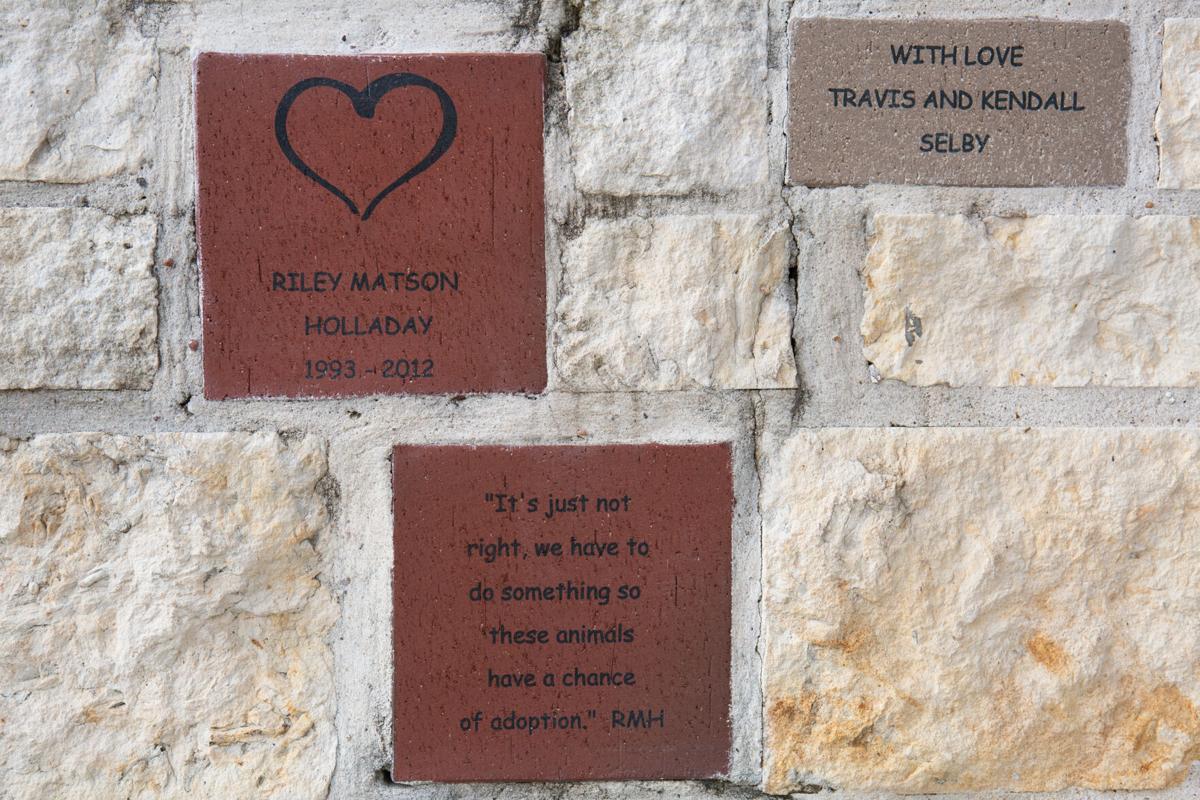 Tiles dedicated to donors can be seen on the outside of the Calhoun County Human Society facility on Tuesday. 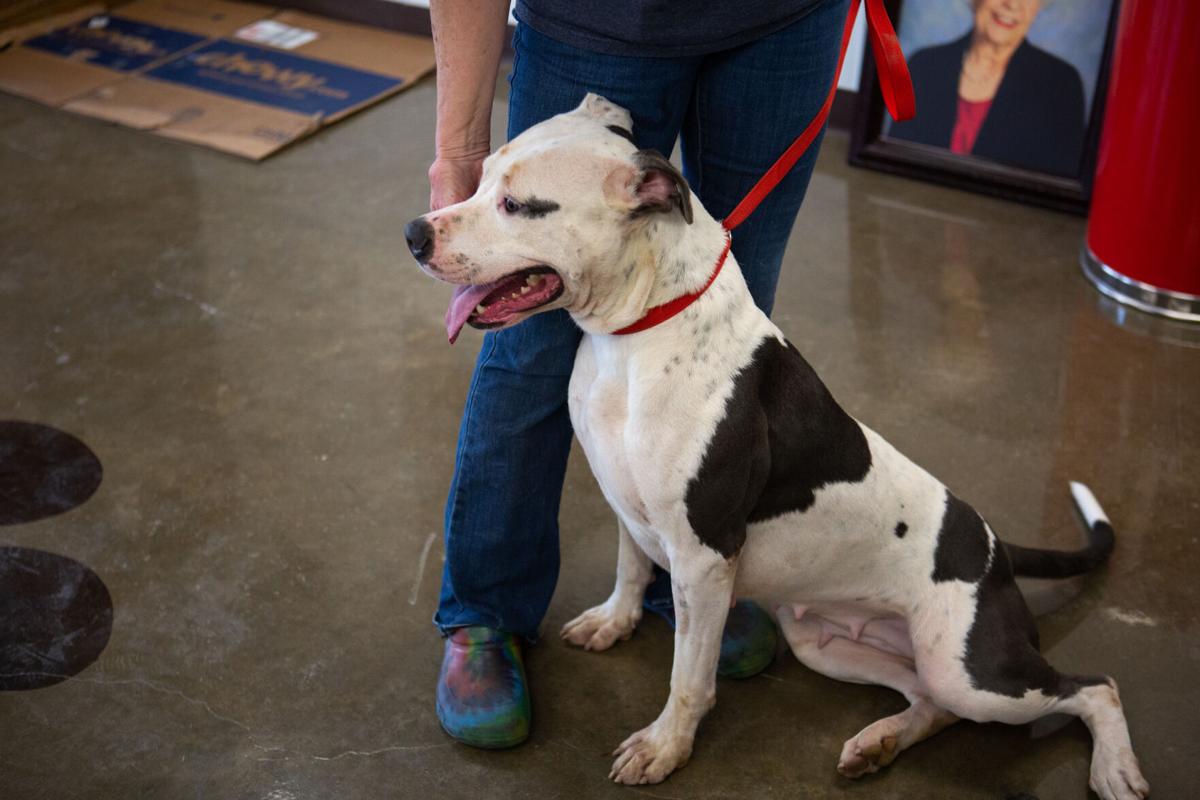 Elsie, a dog available for adoption, sits on the ground with volunteer Kim Tatum inside the Calhoun County Humane Society's new facility on Tuesday. 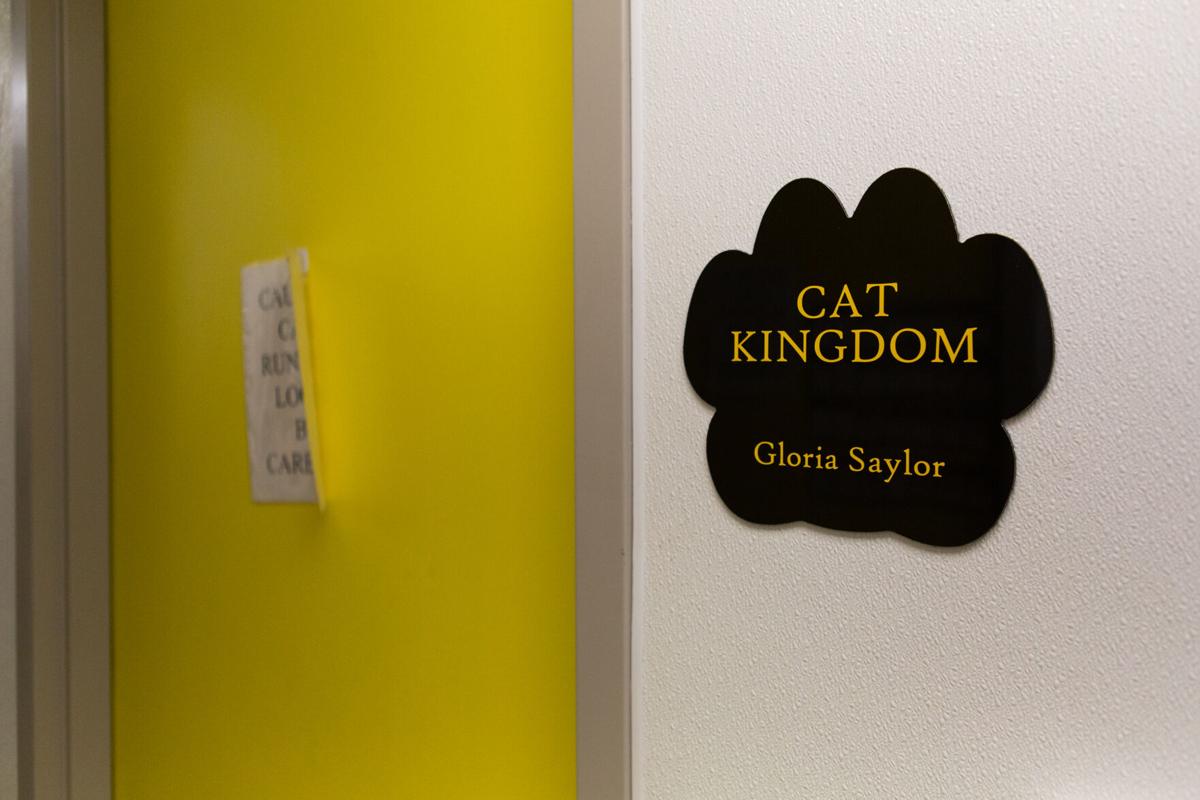 A sign for one of the cat rooms dedicated to Gloria Saylor, a founding member of the Calhoun County Humane Society. 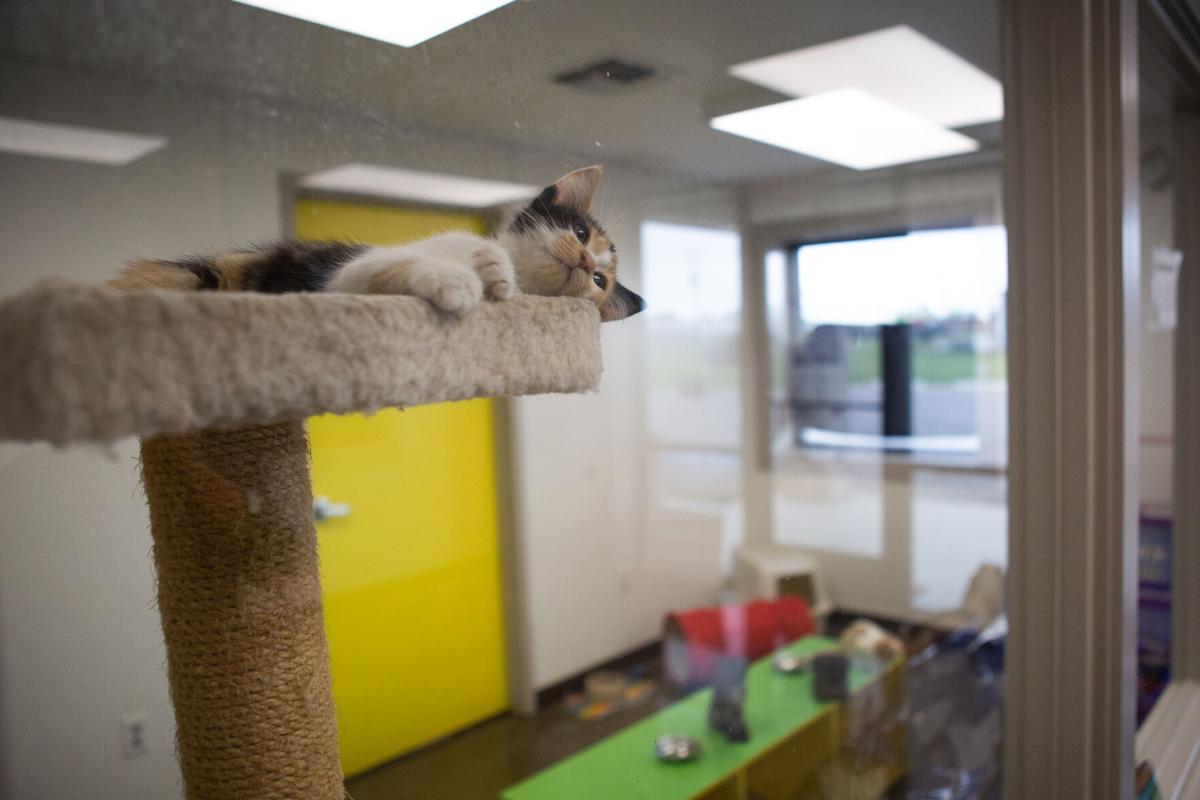 A kitten lays on the platform of a climbing tower in one of the cat rooms at the Calhoun County Humane Society on Tuesday. 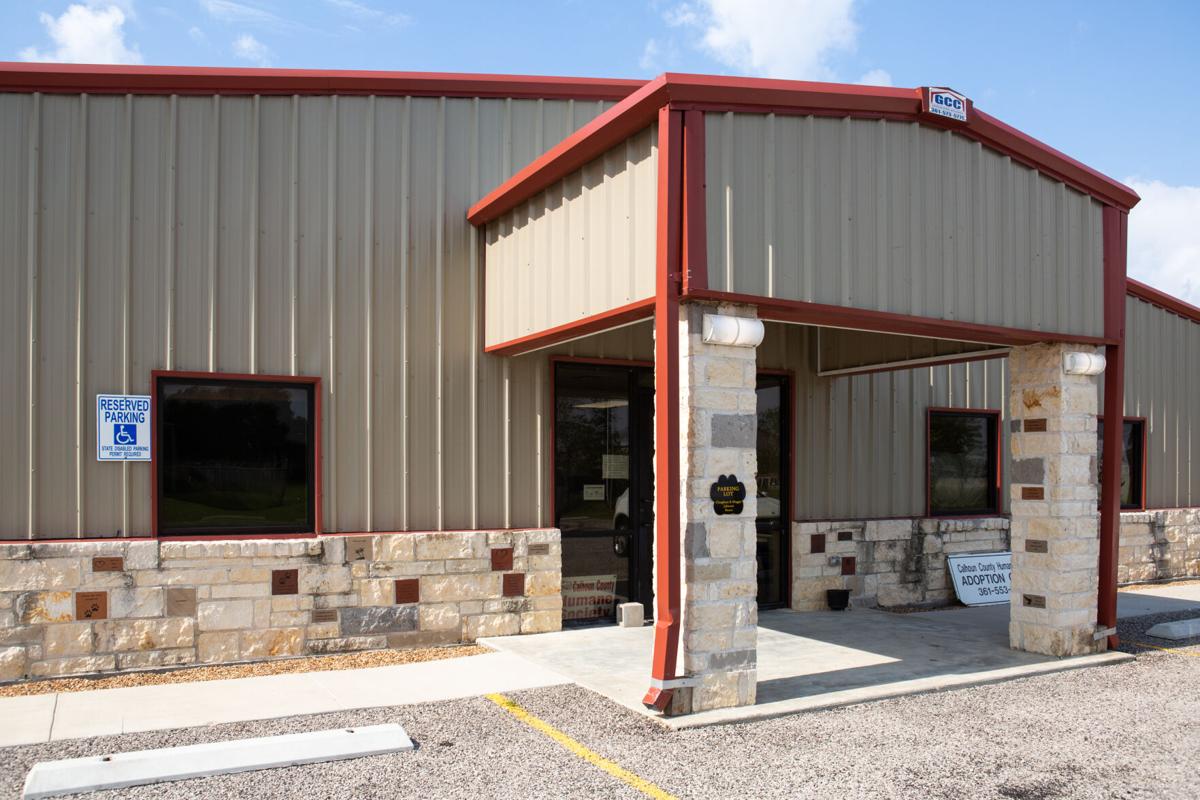 View of the outside of the Calhoun County Humane Society on Tuesday.

A kitten looks out from behind the glass of one of the cat rooms at the Calhoun County Humane Society on Tuesday.

Tiles dedicated to donors can be seen on the outside of the Calhoun County Human Society facility on Tuesday.

A sign for one of the cat rooms dedicated to Gloria Saylor, a founding member of the Calhoun County Humane Society.

PORT LAVACA — When Kim Tatum retired as an educator in 2012, she started seeking out ways to pass the time.

The longtime Port Lavaca resident found an outlet at the nonprofit Calhoun County Humane Society, where she said she has taken to working with the animals rather than people.

“They are just easier,” said Tatum, 64, with a smirk as she walked the halls of the nonprofit’s recently completed facility. She greeted the dogs and cats in her care by name — not missing a single one. “The best part of the new building is the space. We can hold about double the cats and dogs we used to, and that is great for me, personally.”

Located just outside Port Lavaca city limits, the nearly 5,290-square-foot building held its official grand opening late last month, capping off a years-long construction process funded mainly by donations and fundraisers. While the grand opening ceremony officially marked the facility’s unveiling, the all-volunteer force moved into the building in June 2020. Since then, the nonprofit has had a significant impact.

The facility has 30 large kennels for dogs and more than 30 kennels for cats. The large kennels are indoors, so the dogs are sheltered from the elements, and the room is equipped with ceiling-mounted space heaters and large fans. The heaters, in particular, were helpful in February when Texans faced record-low temperatures during Winter Storm Uri, said Tatum.

Costing about $750,000, the facility also includes individual “meet-and-greet” rooms for dogs and cats to meet potential adoptive families, an assessment room for intake of new animals, offices and a treatment room for medicating, bathing and grooming, said Janice Holladay, Calhoun County Humane Society board president. She also helped plan the layout of the building.

“It was inspired by our love of animals,” she said of the facility. “Our goal is to operate an animal shelter in a humane way. This facility helps us do that.”

Tatum and Holladay said the new facility is a significant update from the previous one.

In 2005, when the nonprofit was formed, the City of Port Lavaca allowed the volunteers to operate out of the same facility as the city’s animal control department, a 3,200 square-foot building on Stringham Drive. There, the volunteers worked alongside city employees, sharing the space, kennels and facilities equally, said Tracy Horejsi, who has led the animal control department for almost five years as a supervisor.

“We’d give them 15 kennels, and we’d take the other 15,” said Horejsi. “It worked smoothly, but it got cramped sometimes.”

Since the nonprofit moved, the entire facility has been open for use by city animal officers. As a result, the department has seen fewer animal euthanizations since the nonprofit gets most of its animals from animal control, Horejsi said. The nonprofit does not take in owner surrenders.

“We don’t euthanize for space ... We are incredibly close to becoming a no-kill shelter. We don’t have the official designation, but we are pretty much there now,” Horejsi said. Figures on animal control’s euthanization rates were unavailable because the department is upgrading their computers, he said. “They have done great work, and they are great partners.”

Efforts by the humane society have allowed his department to focus more on enforcement and education for the city since the nonprofit handles the majority of the adoptions, Horejsi said.

The facility’s construction, which started in 2017, has been years in the making and has had many hurdles. Hurricane Harvey slowed the process to a crawl and impacted the availability of building materials and contractors, said Holladay. Then, once the facility was completed, the nation was in the middle of the COVID-19 pandemic, which caused the nonprofit to lose volunteers.

However, with the official grand opening in the rearview mirror, the volunteers are looking forward.

“We have the capacity now to do a lot more good,” said Tatum.

People who donated funds or time to the Calhoun County Humane Society were honored in different ways at the facility. On the exterior of the building, bricks were etched with the names of dozens of donors along with special messages and  pets' names. Others have interior rooms dedicated to them. Donors who have purchased food for the animals had colored nameplates made with their name on them. Those are on display in the front lobby.

Holladay, the board president of the Calhoun County Humane Society, said she got the idea to start the nonprofit after visiting a vacated animal control facility with her son, Riley Holladay, in 2005. At the time, her son remarked on how he wanted to do something to help local animals in need of adoption. Riley died at the age of 18 in January 2012 in a car crash. His name is etched into a brick near the entrance of the new facility alongside a quote of his.

To volunteer time or donate money toward the new Calhoun County Humane Society facility, call 361-553-8916 or send mail to P.O. Box 1505, Port Lavaca, TX 77979. For more information, visit their website at calhouncountyhumanesociety.org or their Facebook page.

"We desperately need help greeting people and showing animals to potential adopters," said Holladay. "Come sit in the kitten playroom and socialize cats by holding and playing with them. Take a dog for a walk or give it a bath. Volunteer to transport an animal to the vet, PetSmart or to a rescue. Our volunteers devote all their time to cleaning, feeding and medicating the animals. No time is left for exercise and cuddling."