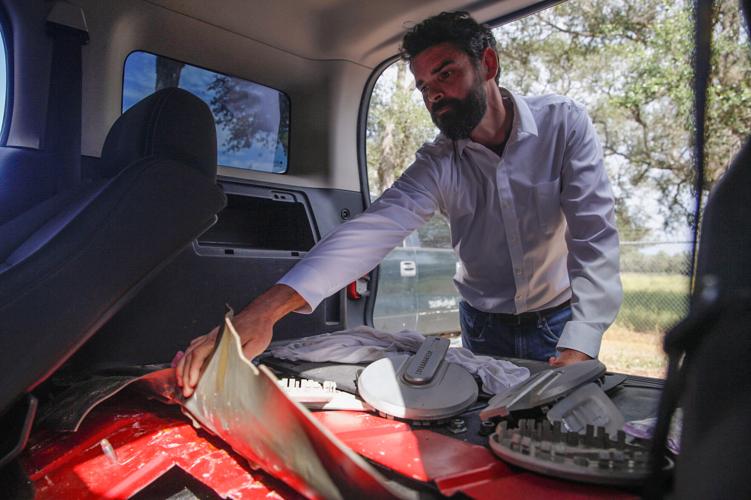 Tim Poynter, assistant district attorney, shows a hidden compartment found in one of the seized vehicles on Tuesday in Refugio. 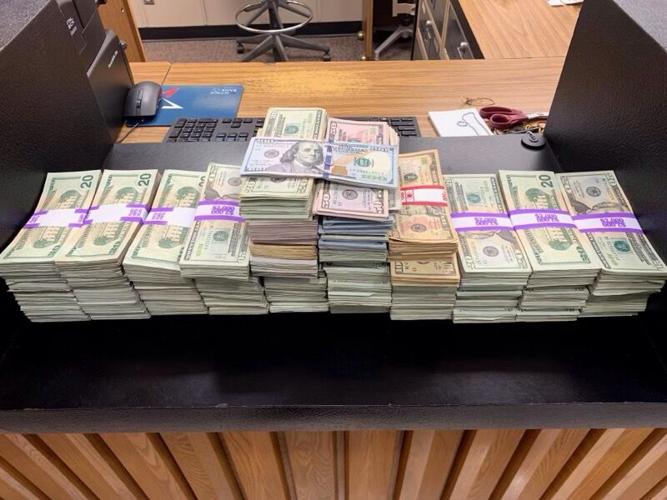 Stacks of seized money that were found hidden in a compartment in a semi trailer, said Assistant District Attorney Tim Poynter. 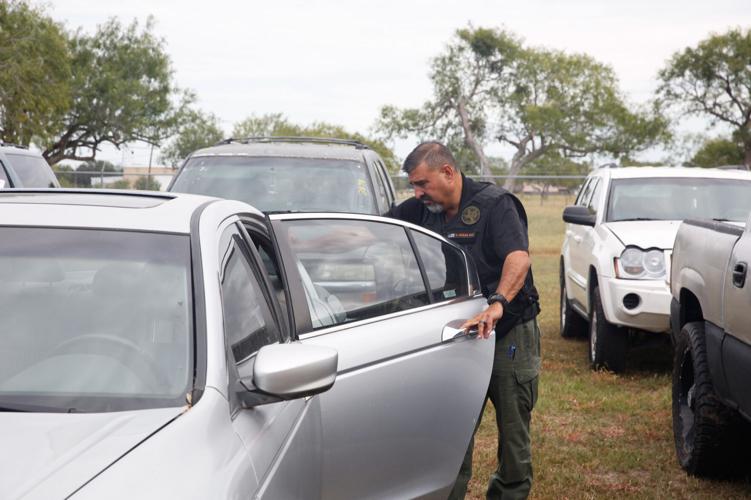 Lt. Hugo Rosas looks through the interior in one of the seized vehicles up for auction on in Refugio. 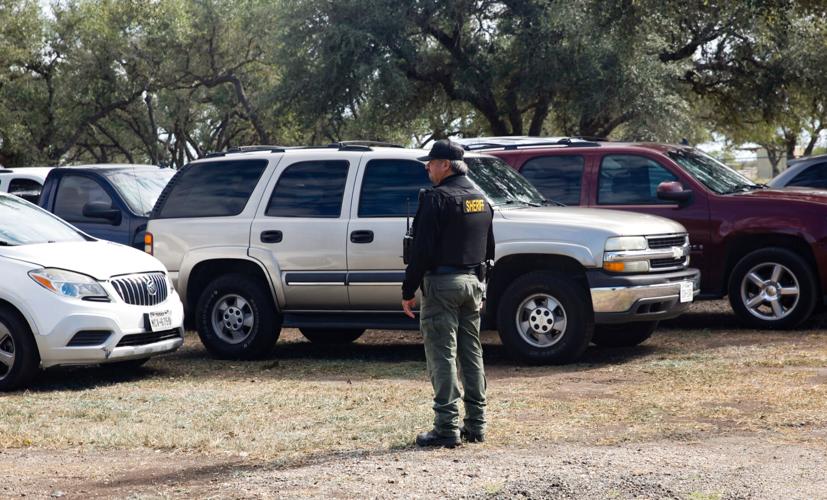 Deputy Dean Ochoa surveys a lot full of seized vehicles on in Refugio. 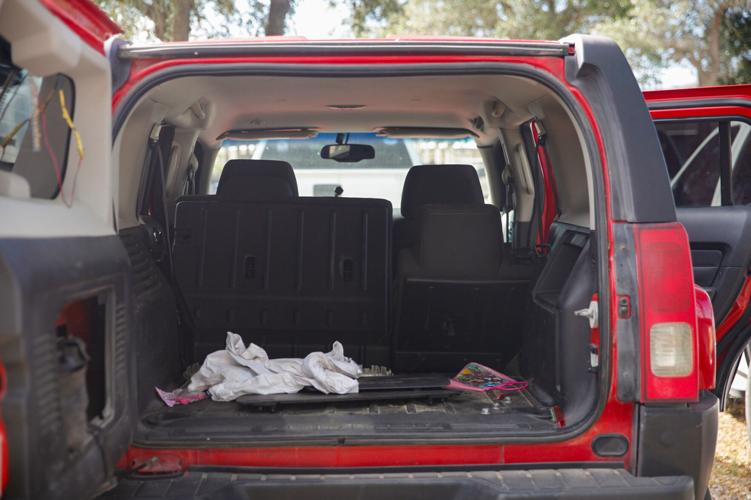 The interior of one of the seized vehicles on Tuesday afternoon in Refugio. 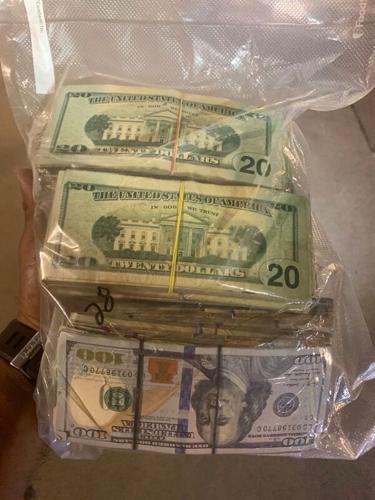 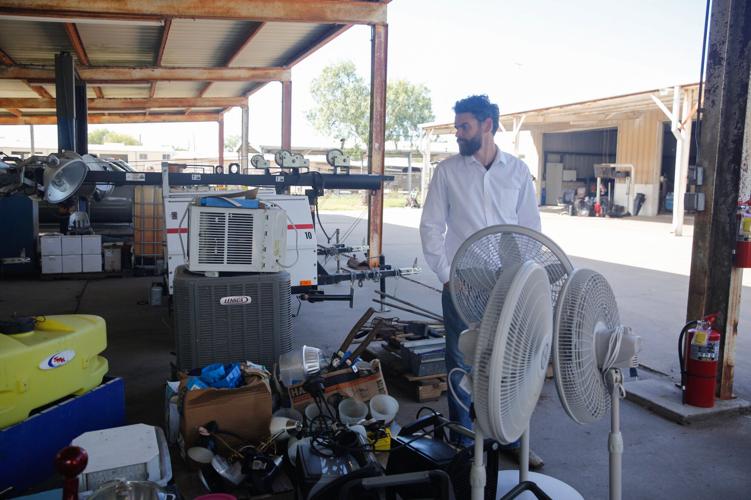 Tim Poynter, assistant district attorney, shows a hidden compartment found in one of the seized vehicles on Tuesday in Refugio.

Stacks of seized money that were found hidden in a compartment in a semi trailer, said Assistant District Attorney Tim Poynter.

Lt. Hugo Rosas looks through the interior in one of the seized vehicles up for auction on in Refugio.

Deputy Dean Ochoa surveys a lot full of seized vehicles on in Refugio.

The interior of one of the seized vehicles on Tuesday afternoon in Refugio.

In all the crime and court shows on television, a stack of money or a vehicle has never appeared on a witness stand or sat next to a defense attorney strategizing a case, and, yet, it is true that stacks of money, vehicles and other items are often seized during criminal investigations and are taken to court — then often forfeited to law enforcement.

In Victoria County, back in February, several Louis Vuitton, Michael Kors, Kate Spade and Chanel bags and wallets were named in a lawsuit versus the state of Texas. In the same case, a carpet-cleaning machine was sued, as well as $39,061, according to court records.

The two people accused of possessing those items — Rod Anthony Jackson, 47, and Kristie Lynn Kolodziejcyk, 43, both of Victoria, were suspected of dealing drugs, the arresting agency’s affidavit said.

Civil asset forfeiture cases are codified in Chapter 59 of the Code of Criminal Procedure and allow law enforcement officials to seize things — vehicles, money, drugs and other items — found during investigations of illegal activities.

Most assets in 2022 were found during traffic stops conducted while monitoring known criminals, according to Victoria County court records. In the above case, a search warrant was issued for the residence of the couple after a traffic stop yielded probable cause.

Thousands in seized money paid for a new gym facility in the basement of the sheriff’s office, the Victoria Advocate reported recently.

In forfeiture cases, the suit is against the seized items: the state has to prove they were used during or were part of a felony criminal act, such as drug trafficking or human smuggling. Once the state proves its case, the items become its property.

“In criminal law, if you use an instrument in commission of a crime, that item is seized,” Assistant District Attorney Tim Poynter, who serves DeWitt, Refugio and Goliad counties, said last week. “Things can’t be seized for misdemeanor crimes. It has to be a felony, and the nature of crimes is that you have to travel to do it, like in human smuggling or drug trafficking.”

“We don’t automatically get to keep seized vehicles,” he said. “We have to sue the vehicle. The reason for the suit is that we don’t always know who has the title to the vehicle. Sometimes, the owner is innocent. For example, a parent lets their kid use a vehicle and the kid uses it for a criminal purpose.”

In Refugio, Goliad and DeWitt counties, Poynter said, he has filed 69 forfeiture cases in the past 12 months. Of those, he was awarded 40.

According to Victoria County court records, there have been 25 civil asset forfeiture cases so far in 2022, the largest of which was against $120,079 seized by deputies during a traffic stop. The money was found in bundles and in the vehicle of a suspected criminal.

Victoria County District Attorney Constance Filley Johnson said Wednesday all the assets seized are put to the best possible use, materially aiding law enforcement for the most part.

The numbers are staggering.

Drugs are seized in remarkable quantities, as well, Poynter said. They are later destroyed.

“Drugs that are seized are scheduled for destruction,” he said. “They are usually burned. It’ a cheap way to destroy them. A can of diesel and a hole in the ground doesn’t cost much.”

On the other side of the fence, some civil liberties groups, such as the American Civil Liberties Union, have condemned the forfeiture process, saying that the process infringes on civil rights.

The House Committee on Oversight and Reform held a hearing in December in which experts testified “studies show that low-income communities and communities of color are disproportionately affected by civil asset forfeiture programs. Challenging civil asset forfeiture is a costly and complex endeavor, making it more difficult for low-income individuals to recoup their seized assets.”

Some even testified asset forfeiture gives law enforcement agencies “a perverse incentive to abuse the civil rights of Americans in exchange for profit.”

One study showed that once forfeiture was federally codified, in 1984, drug arrests spiked, perhaps owing to that incentive.

A quick look through Victoria County’s civil asset forfeiture cases shows that most assets are not represented by a lawyer, and the judgments are largely by default.

Marr said his office follows state and federal guidelines in asset forfeiture, adding “asset forfeiture is a mechanism of the law that allows for proceeds of illicit and illegal activity to be used to combat criminal activity within communities.”